What does it take to win a 5 day National Road Calendar Professional Stage Race? 8,815 kiloJoules, a training stress score of 762 over the course of the 3 main road stages, and some serious power-to-weight output. Double stage and overall general classification winner Will Frischkorn of the composite Ofoto-Colavita team used an SRM powermeter during 3 days of the Colorado Cyclist Classic and here’s the low down.

Stage 1: Glen Haven Road Race, 87 miles, altitude: 7522 feet; total climbing 6000 feet
At the start of this road race, the racers faced a 10 mile 1500 foot climb followed by a looong downhill into flat terrain before finishing with 17 miles of climbing and 12% grade switchbacks at the top!

Will rolled off the front from the gun with Danny Pate (Health Net-Maxxis) and Dan Bowman (TIAA-CREF/5280) into what would be THE GC move of the week. Over the next 31 minutes Will maintained a power output of 4.65 watts per kilogram of body weight. Not a huge effort for Will, but one that the peloton was not interested in so early in a long race and the first of 3 tough road stages. With a gap of 5-6 minutes at the top of the climb the three breakaway companions got down to business of working together. Over the course of the next three hours Will rode tempo with a normalized power output of 264 watts or 3.8 w/kg.

As the three approached the finish line, Will told me Danny started increasing the tempo and he did the final 14 minutes at 4.9 w/kg. On the steep switchback Frischkorn made his winning move and sustained 5.7 w/kg over the final 4 minutes. Keep in mind that power output was at nearly 8,000 feet and it came after an 86 mile breakaway. Both of these factors lead to a reduced power output and make these numbers all the more impressive. The 23 year old’s ability to produce a peak power output at the end of a race and edge out Pate by 5 seconds made all the difference. Oh yeah, 4th place rolled in over 6 minutes later!

Stage 2: Devil’s Gulch Road Race, 80 miles, altitude: 7480-7910 feet, 6850 total climbing
With a 6 minute GC cushion over 4th place, the overall was down to Will, Danny and Dan. But Prologue winner Chris Baldwin (Navigator’s) wasn’t having any of that. Baldwin aka “Scooter” threw down the gauntlet at the beginning of this tough tough circuit in what Frischkorn described as super fast, “he attacked like 50 times”. Analysis of Will’s SRM files confirms the difficulty of the initial few laps that completely shredded the main field.

Will maintained 5.1 w/kg for 20 minutes during Baldwin’s ballistic onslaught and 6.1 w/kg for 4 minutes over the most difficult portions of the course during Baldwin’s vicious attacks. That’s what it takes to win an NRC stage race! Or in this case, to successfully defend a GC lead. Scooter, who won the prologue by 59 seconds from 23rd placed Frischkorn, was also “going good”. Realistically, what this meant was that Baldwin likely had the engine to win the GC, but the beauty of cycling is that you need both strength and tactics to win!

Stage 3: Horsetooth Reservoir, 84 miles; altitude ~5000 ft; 5400 feet of climbing
With only 5 seconds and 1 stage remaining for Danny to take the GC, this was the make or break day before the 4th and final stage criterium. After Will matched Danny’s mid race attack with another 5.1 w/kg 20 minute effort, Health Net’s team tactics shifted into setting Danny up for win and the 20 second time bonus. In the final kilometers as the Health Net team erased an all day breakaway, Will played it cool as a cucumber and set up shop right behind Pate and Health Net’s leadout train.

With one peak effort of 16.8 w/kg in the final 100 meters, Will pimped Pate on the line for the win and a virtual lock on the overall. Frischkorn’s numbers are even more impressive if you consider that this data was collected between 5,000 and 9000 feet. Granted, Frischkorn lives at 5,563 feet in Boulder but even acclimatized athletes can expect roughly an 8% decrease in their power by the equations of Basset et. al between 5 and 8 thousand feet. 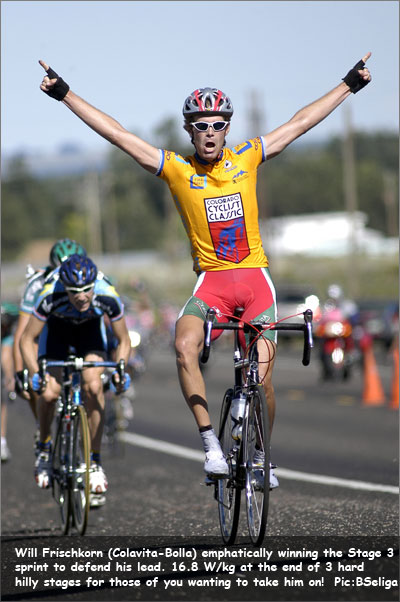 Besides the thin air, this was a stage race with 5 back to back races where cumulative fatigue clearly played a role. On the decisive GC move, stage 1, Will racked up a training stress score of 243 followed by 253 and 266. Scores between 150 and 300 represent a moderate effort where some residual fatigue may carry over into the next day. Based on Will’s extensive stage racing this season these numbers and races were not that difficult for him to recover from, as illustrated by his consistent ability to reproduce similar peak power outputs on stage 3 as stage 1. For reference, Will was in an all day breakaway during the Olympic Trials race cranking out 5150 kilojoules over 5 hrs and 15 minutes with an average power output of 297 watts. In hindsight, an incredible day of training!

Summing it Up
Rarely do we get the chance to peek under the engine of an elite professional cyclist and get their complete training/racing data (it’s usually guarded more closely than the Caramilk secret), so we definitely want to thank Will for his generous permission for us to analyse his ride. What are some of the critical lessons to learn?

1. A stage race of many hundreds of kilometers and hours of training and racing can come down to minutes or even seconds. Frischkorn’s overall win came down to the final 4 minutes and 45 seconds of stage 1 and the final 100 meter sprint on stage 3. Of course he displayed a cadre of skills up until those points but for those critical moments he was the MAN. Winning therefore requires top-notch fitness, tactical savvy, and also plain luck to be in the right break at the right time!

2. Defending a lead, whether you’re the leader or the domestique, can be just as hard as attacking! Remember this the next time you see a team tow its leader stage after endless stage.

3. It takes an incredible amount of foundation fitness and planning to be able to replicate such huge power outputs day after day. You cannot try this at home unless you’ve replicated these efforts in training with a planned series of back-to-back heavy days of training, along with practicing proper recovery in between.

4. One of the key components of race fitness is being able to pump up the volume at the end of the races. While you might do your intervals at the start of your workouts earlier in the year to maximize freshness, race fitness during the peak parts of your season can only be replicated by doing your intervals at the latter stages of your workout, when you’ve already got some K’s into your legs.

FasCat Coaching would like to give a special shout out to the fine folks at CyclingPeaks Software whose excellent powermeter software package made this analysis possible. And of course to the Colavita-Bolla professional and all around nice guy, Will Frischkorn for sharing his SRM files. Best of luck at the T-Mobile Grand Prix in San Francisco!!

Frank is a full time USA Cycling Expert certified coach who specializes in training athletes with power. If you need help analyzing your training and race power files, contact Frank at FasCatCoaching.com