In early January we published Month #1 of a real rider’s PowerCranks training diary. Josh Horowitz admitted they are a lot tougher than expected, but could see how he would soon benefit. In Month #2, Josh takes to the road, suffers like never before, and discovers that pain does indeed precede gain…

So much has happened since my first entry, it’s hard to know where to begin. A month of threshold training and then another month of Vo2 max training led to major improvements in endurance and power, and then two weekends of hard road racing saw some of my best career performances. Many variables factor into this including a shorter off-season, a refined training program and of course, those crazy devices called PowerCranks.

Here’s a summary of five weeks of journal entries starting one week after my last posting: PowerCranks- How Tough Are They?.

RIDE UP: Dec 21- 28
I spent this week pretty consistently on the cranks with the exception of a few longer days. One thing I am noticing is that it is very hard to keep a high cadence when using these. Normally, I like to stay between 85 and 90 on my endurance rides, but I find myself struggling to stay at 75. I’ve heard a few suggestions regarding specific training to improve this, but my thinking is that when the muscles adapt to the motion the higher cadence will just come along naturally. 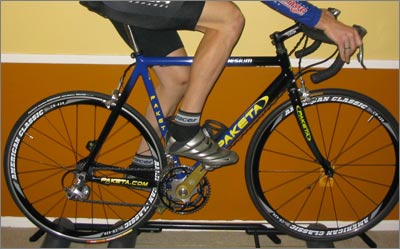 This month we join Josh as he leaves the safety of his rollers behind, and ventures out into the real world with only his PowerCranks to propel him!

Sunday, I was up in Monterey for the holiday weekend with my family. They decided to do some hiking in Big Sur and I planned to ride out and meet them for lunch. This was to be my longest ride on the PowerCranks. Four hours of scenic beauty along the PCH and then into the Big Sur National park. After about two hours, I began to experience fairly intense soreness in the muscles and tendons in the back of my knee. I made it through the ride and felt good about my performance (average wattage of 220), but by the end, the pain was pretty bad. Of course this doesn’t indicate any problem with the device, in fact, just the opposite. This just tells me that before I started using the PowerCranks, I was not utilizing all the muscles in my legs to complete a full pedal stroke. This was just a case of too much too soon.

REST UP: Dec 29 – Jan 4
I had to pretty much take this week off of the PowerCranks because even on my regular cranks, the muscle soreness behind my knees was still pretty bad. I guess however, this is a good sign because clearly, I was starting to transfer some of the pedaling technique I had learned over to the regular cranks. In fact, when I attempted to avoid pulling up on the pedals (to alleviate the soreness), I couldn’t do it. It wasn’t such a bad week to take off from the cranks because I had developed some muscle fatigue and had some grueling threshold work to do, which I don’t think I would have been ready for with the PCs.

POWER UP: Jan 5 – Jan 11
With the pain in the back of my legs pretty much gone, I went back to my old routine of riding the cranks on my easy days and endurance days and using regular cranks for my threshold work. I would have really liked to try the cranks on my interval days, but I have to work pretty hard to keep my heart rate in the zone, and I didn’t feel like I was quite ready to put out that kind of effort while still having to concentrate on turning the pedals around. Either way, it was a great week. Something must have been working because by Friday I managed to average 375 watts for all three of my 15-minute threshold intervals. A big improvement from a month ago and though I don’t have anything to compare it to, I’m sure one of my stronger efforts to date.

A PERSONAL BEST: Jan 12-18
This week marked the first of my zone 5 of Vo2 Max intervals. I have a certain section of road that I like to do these on that is slightly uphill and has numbered cross streets so I can always tell how my intervals compare (i.e.… 22nd street is ok, 23rd is good, 24th is the ultimate goal.) On a whim I decided to try these with the PowerCranks and the intervals went great. Right away, I made it to my best mark of last season, which was impressive since that mark was set during one of my peak phases and this was just pre-season training. Another success to note is that while previously, I was struggling to keep my cadence up above 75 on my endurance rides, I managed an average cadence of almost 100, with a max of 110 on one of the intervals. To me, this is one of the strongest indicators that I am finally getting the hang of this. However, one thing to note is that (at least at first), the recovery time between intervals is a bit longer due to increased muscle fatigue and this needs to be taken into account in your training program.

MEASURING UP: Jan 19-25
I’m really feeling comfortable on these now and I think if it was a little earlier in the season, I could probably ride them full time. However, as fast as I progress on the cranks, my training schedule is progressing even faster. This week, I did over 20 hours with 4 days of intervals. The week ended with my team’s training camp in Palm Springs and I was hoping to knock everyone’s socks off by doing our long Saturday ride on the cranks, but I found I was just too tired by the end of the week so I used my regular cranks. Still I had some strong rides and I am definitely farther along now than this time last year.

EARLY SEASON RESULTS!
Because of the start of the racing season, I have actually not put the cranks back on my bike since the camp. However, the results are already showing. I placed 5th in the first Road Race of the season on January 29, (only my 3rd top 5 result in a road race to date). I’m especially pleased with this as I usually struggle in the first month of the season as my body gets used to race intensity. The next weekend at the Boulevard Road Race (one of the hilliest in Southern California), I was flying again and after going off the front for over 50 miles (in a race where I got dropped on the first climb last year), I was caught, but still would have made the top 10, if not for a broken derailleur with only 5 miles to go.

On a final note, this past weekend at Valley of the Sun in Arizona, I had a decent result in the Road Race (15th), but was terribly disappointed in my time trial where it felt like I was desperately lacking power (Kudos to Todd Herriot who did the TT with his PC’s and finished a few seconds in front of me!). Having been off the cranks for over three weeks now, this just tells me its time to get back to work. Tomorrow morning, I will put them back on and start the suffering again. With one of my target races, The Tucson Bike Classic, three weeks away, this will be another good test of just how effective these things really are.

Josh is not getting paid to write nice things about PowerCranks, but he is a Cat1 pro and licensed USCF cycling coach from Southern California, looking for every way to get more out of his body. He was last seen reporting for PezCycling News from deep inside the bunch at the Tour of Southland in New Zealand. Check out his website at www.liquidfitness.com.