ToolBox: “I’ve been training for months for this race. Everything must come out perfectly. I’ve been decreasing training load this past week and I need to do a big ol’ carb loading to make sure I don’t run out of gas tomorrow. Let the pasta festival begin!”

Sounds familiar?
It’s probably one of the most sacred pillars of cycling. If you’re racing tomorrow or in two days, you must be starting to eat pasta as if the world is gonna end tomorrow.

While it’s undeniable that a proper carb-loading is a science-based strategy to increase exercise performance during a race-event in many endurance sports like cycling, some guidelines and factors must be taken into account before booking dinner for that Italian restaurant. 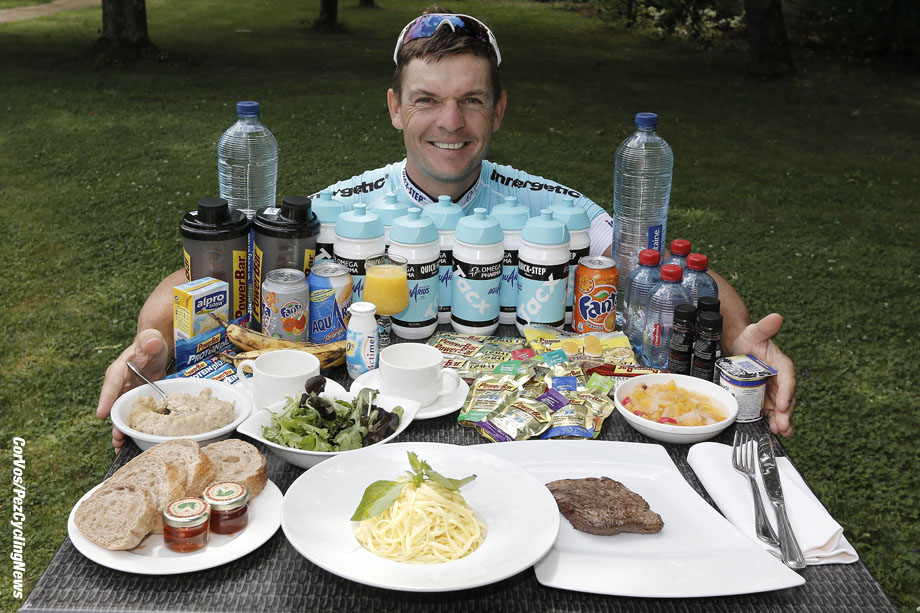 What is a carb loading and why should you consider doing it?
In fact, I believe it doesn’t need much explanation. I dare saying that everyone who does cycling knows what a carb loading is… The problem lies in a rather simplistic version that cyclists tend to have: Plain boiled pasta the night before, in the form of spaghetti, preferentially whole-grain.

“Carb-loading” popularly refers to increasing the amount of carbohydrate rich food on your diet before a competition in order to increase both muscle and liver glycogen, both essential fuel stores to sustain high intensities during prolonged exercise such as a cycling race lasting hours.

Contrarily to previous belief emerging in the 60’s, there’s not need to deplete glycogen stores on the week preceding the race, so you can load-up your glycogen stores. That matter appears to be clear in 2019.

What it seems to be less clear is the “when” and “how” parts of the story, more specifically when to begin the carb-loading and what foods can be used.

What can go wrong in a carb loading?
If the answer was so clear, we wouldn’t have folks begin the carb-feast 4 days before competing while others eating 3 plates of pasta the night before. None of these extremes is right and both can even lead to performance impairing during the race.

The main criteria to consider when loading up on carbohydrate-rich food before facing a race event are:
1. Total race duration
2. Training intensity/duration on the week before
3. Athlete training level

There seems to be little or no performance benefit of glycogen loading when the exercise duration is less than 90 min. This is the magical number to take into account. But since cycling race events are often longer than 90 min, lets go on to number 2.

This is normally what is less taken into account: on the days previous to a race, the training intensity decreases significantly or is practically inexistent. This may indicate that glycogen stores have had enough time to be replenished, not only because of low physical activity, but also due to “normal” carbohydrate ingestion on those days. 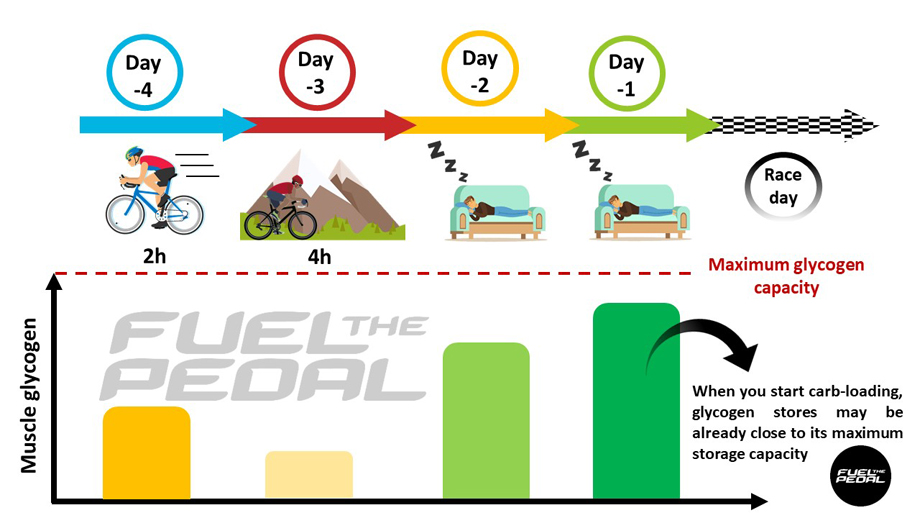 Therefore, if you have been resting in the days before the race event, take that into account because your muscle glycogen stores may be already close to its maximum storage capacity.

This is why in some situations, aiming to higher carbohydrate intake to achieve higher glycogen stores might not always result in better performance. Since glycogen is already fully loaded, the weight gain as a result of water retention (approximately 3 g per gram of glycogen) will only result in performance decrease by carrying additional weight during the race.

In summary, self-prescribed carb-loading protocols can essentially go wrong when not taking into account that you’ve been resting in the previous days and you eat as if you’ve been training hard until the last day before the race.

So, when to begin a carb loading protocol?
Taking into account the previous point, it may be fair to state that when reducing training intensity and duration in the days before the race while maintaining a “regular” carbohydrate ingestion in those days, starting your increased carbohydrate ingestion (around 8 to 10g/kg/day of carbohydrate) the day before at breakfast, should be enough. That is, if the race duration is superior to 90 min.

If however, you’ve been training hard until the previous days or eventually if you’re racing again after having participated on a race in the past days, you probably should consider starting your glycogen loading protocol 48h before racing, aiming for 10 to 12g/kg of carbohydrate per day.

And even considering the scenario where you’ve been resting and your race lasts less than 90 min, a carbohydrate rich meal the night before is more than enough.

Whatever the protocol applies, please bear in mind that the dinner before should not be too “heavy” and above everything else in my experience with cyclists, it should be done as early as possible since the athlete should be in bed earlier than usual and the time to digest the food is reduced. 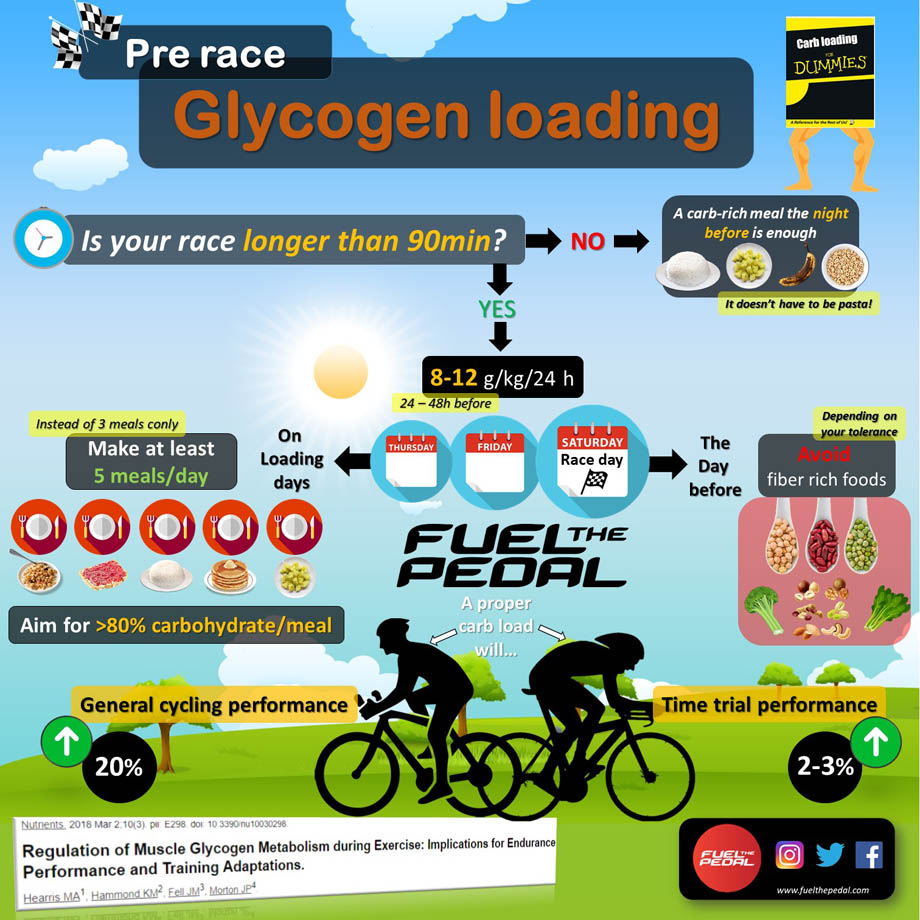 What foods can be used while increasing carbohydrate intake?
If there’s anything I want to strongly contribute with this post is to: STOP RELYING ON PASTA ONLY, PLEASE!

I believe this myth has been gradually decreasing but it still remains present in some more conservative cycling spheres.

What seems to essentially matter when choosing foods for carbohydrate loading days is:
• Foods familiar to the athlete
• Foods low in fiber/residue that are easily digested
• Food that allow for total carbohydrate target to be met

When I present this argument I’m usually asked: “but is there anything wrong with pasta?”. No, pasta is fine. The problem is relying in the same food in an obsessive way and blindly believing that one particular food holds the key for successful carb-loading. It might be a problem (even psychologically) when you don’t have pasta available for some reason.

Additional advice?
Another very usual mistake I often see in cyclists’ carb-loading the day before is to concentrate everything in the three main meals (breakfast, lunch and dinner). This may not only prevent you from reaching your carbohydrate targets, but can also force you to have an excessive amount of food at dinner to reach your carbohydrate goals.

Instead, try to do at least 5 or more meals and concentrate your ingestion early in the day, so can you don’t need to eat too much at dinner.

Take home message
First of all, consider consulting with a registered dietitian/nutritionist before self-applying carbohydrate loading strategies before a racing event.

Proper muscle glycogen loading timing requires taking into account the training load of the days before the race event and also the duration of the race itself.

When choosing foods rich in carbohydrate, you don’t have to rely on pasta all day. Other food sources like rice, potatoes or bread are also equally valid and do not fear including fruit juices, syrups, jams, pancakes or even gummies.

Just make sure not to try new foods the day before racing and practice carb-loading protocols throughout the season so you know what types of foods you tolerate best. 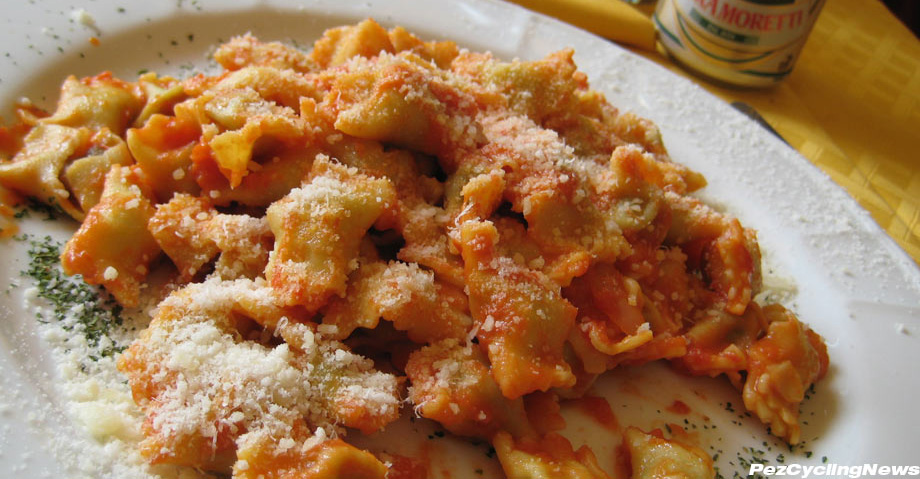 SIDI: Heaven and Hell in Roubaix