The Sufferfest series of training videos have quickly gained popularity as their use of actual pro race footage, variety of sessions, and heavy dose of humor are great motivators through the dark days of winter. But how do they stack up as a power-based workout? We asked Matt McNamara to apply his expertise as a power-based USA Cycling Level 1 coach to put them to the test.

Suffer (verb): Experience or be subjected to (something bad or unpleasant). To tolerate or endure evil, injury, pain, or death. In general usage the preferred preposition after suffer is from, rather than with, in constructions such as He suffered from hypertension. Within cycling a more apt preposition might be for, as he suffered for cycling.

The gang of n’er-do-wells at The Sufferfest have consistently raised the bar on quality indoor training videos over the past couple of years. Toolbox editor, and avowed hard man, Dr. Stephen Cheung wrote a thorough overview of the series in 2010, while the Pez himself gave two tired thumbs up to “Local Hero” earlier this year. So what is left to say? Well, as a power based coach and one who loathes indoor training more than most, I thought I’d look at the training value of the videos from a power based perspective to put a little science behind the praise. 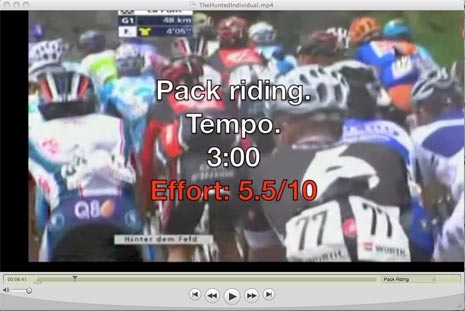 Easy to follow on screen instructions encourage maximum volume for the musical accompaniment.

The Method
When starting this project it was immediately obvious that the only way to truly measure the effectiveness of the videos was by using a CompuTrainer system. CompuTrainer is a stable and highly accurate ergometer that has been the industry standard for over a decade. Although showing its age in a few important areas (read: user experience), the CompuTrainer Lab model is accurate to within 0.5% when calibrated and offers a downloadable format that can be imported into various analysis software. [Note: CompuTrainer reports that a very redesigned software package is coming soon. = ed.]

Thanks to special licensing with the UCI, you get to join the racing on some very famous courses.

The next step was to decide what I wanted to measure. Once again the obvious choices presented themselves: By looking at training stress score (TSS), intensity factor (IF), and interval composition I could get a pretty comprehensive view of the workouts and their efficacy as training tools.

The final piece of the puzzle was to translate the workouts into a file format that would work on the CompuTrainer. This was a daunting task, frankly. Each video is an hour or more and the workouts are based entirely on self selected Rating of Perceived Exertion (RPE) scale efforts that are cued by on screen prompts! That meant I would have to watch each video, record the time stamps of all on screen prompts and then create an erg file that matched those up with my own RPE scale. 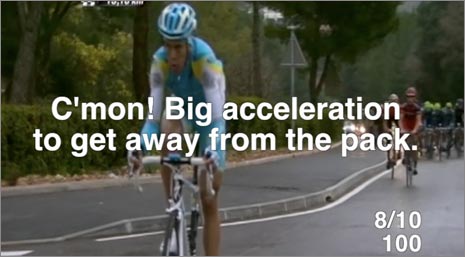 The latest release “A Very Dark Place” piles on the suffering with some of their hardest intervals yet.

Fortunately, I stumbled across a critical component when I found an excel spreadsheet by Ted Meisky, a Sufferlandrien of some repute, who had already broken each video into the component sections I needed. Further, his spreadsheet was laid out as a text file that is easily converted to a CompuTrainer compatible format. You can download his spreadsheet here and a bit more information about the rationale here .

He has also given the spreadsheet several custom inputs for each athlete including the ability to select the threshold power level and the percentages of threshold power used for recovery and maximal efforts (those nefarious 10 on a 10 scale intervals). I used my FTP (functional threshold power) with recovery at 50% (most athletes will self-select a 50% threshold effort for recovery) and max effort at 140%, as that scaled the workout to match my preferred RPE scale where a 7 is considered a circa-threshold effort.

Since I wanted to know the individual TSS and IF scores for each video, I went ahead and created each workout again in Cycling Peaks ERG+ software. The ERG+ software allows me to see TSS/IF values and to scale the workouts for different FTP levels. Unfortunately, it will not open a standard .erg file, so I had to manually create each workout (so much for saving time!). In the end it was worth the effort because I now have good data on each of the videos, so let’s see how a few stack up… 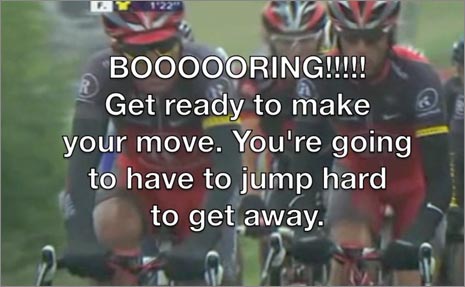 Sufferfest offers up their own brand of humor to help distract from the pain you may feel during the workouts.

The Hunted
This wasn’t the first video produced, but it was the first one I purchased a little over a year ago. Like most, I was immediately impressed with the quality of the experience. Not only did I complete the ride, but I actually wanted to come back for more! For me, the key was the music, each song kept a good rhythm that helped me stay on task. Admittedly, the first ride was not at the same power level that would be assigned by the .erg file – but I think that is one of the true benefits of an RPE based workout; you can scale your effort to your current fitness level, enjoy the experience and simply go harder as fitness allows.

That said we are here to quantify the workout from a power perspective so let’s look at some data from both my ride (ahem!) and an estimate of actual work expected.

Here is the graph of my ride. Not as disciplined as I might like, but at least the efforts at the end – those oh-my-G sprints – were decent:

So it worked out to be 58 minutes at a Normalized power of 252W, an IF of 0.84. Training Stress was 67 points and I burned through 825KJ’s. Compared to the erg file build which looks like this:

Total TSS is up to 81 and Intensity Factor rises to 0.89 – right in that “Sweet Spot” zone we coaches espouse so readily. Still, I’d say that I got pretty close for not having an erg file to push me!

Next up we have the Downward Spiral –

Looking at this one from a coaching perspective I can say that the composition of the workout is surprisingly difficult! With a TSS score of 100 and an Intensity Factor of 0.98 this is one tough hour I set the “max effort” values at 140% of FTP to better correlate an RPE of 7 with a threshold effort, and that had the hard intervals at and above my Maximal Aerobic Power (MAP/VO2max). Fortunately, one can adjust intensity down pretty easily using Mr. Meisky’s erg spreadsheet, so you can scale it to a more sustainable level that is maybe 115 – 125% of FTP. When scaled down to 125% the hardest intervals fall just below MAP and the TSS and IF scores fall to 82 and 0.89 respectively.

A saving grace of this workout is that the MAP efforts are all fairly short ranging from 15s to just over 2 minutes. These short intervals fit nicely into the school of thought espoused by Dr. Guy Thibault (read it here: Intervals Part 3: MAP Intervals) regarding intensity and duration of MAP efforts and recovery. That doesn’t make it any easier to do “The Downward Sprial,” but at least you’ll know you are following a sound strategy. 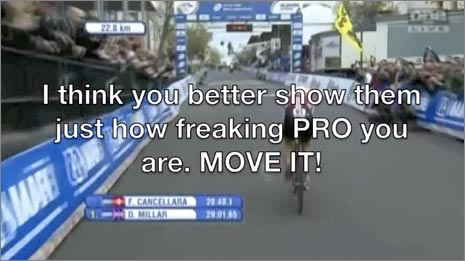 Local Hero
Finally, I wanted to look at “Local Hero” the longest of the series so far at 85 minutes. This story-book tale of a young man-gone-good represents a great cross section of cycling with a cyclocross race, a criterium, lots of on-screen heckling, a selection of toe tapping good music, and the appropriately engaging Melbourne World Championships road race as a back drop. So what’s the breakdown?

Ouch! In about an hour and a half you get 130 Training stress points with an intensity factor of 0.95 when you build it with max power set at 140% of FTP. It is a manageable workout, but probably not in your early base period. To me this is yet another example of the wisdom of building several erg files to represent different levels of fitness (or desire) If you aren’t up to a 130 point workout at 95% FTP, simply build an erg file that has a lower percentage of FTP for maximum. At 125% max this workout scales down to 107 TSS at 0.86 IF. A bit more relaxed, but only a bit.

Summary
The return of winter sees the inevitable return of indoor training. This time tested right of passage will lead you to a fitter and faster next year, but that doesn’t mean it has to be as tortured as you might think. There are numerous tools and programs that will help you pass the time without going crazy and the finest among these is the Sufferfest series. Professionally produced and with an air of tormented humor, each of the videos so far has been just engaging enough to make me want to come back time after time. But of course, being a coach, I expect more than just entertainment value, so I put Sufferfest to the test.

Specifically, I turned to the venerable CompuTrainer system to see just how hard the workouts are and if they address specific systems development. The short answer is the workouts are well designed and appreciably difficult. Each workout measures north of 85 points in TSS and Intensity Factor when they are corrected against an athlete’s functional threshold power.

Though originally designed around rating of perceived exertion, the videos are equally useful for those wanting to build their own ergometer files, and in fact offer a unique ability to adjust the workload for those who do. Simply modulating the workload changes the profile to suit each athlete’s specific fitness needs. Dial it down 10-15% or so, and a challenging Level 4 workout becomes a manageable Level 3.

While the specificity offered by an ergometer based approach is quite robust, it should be noted that simply applying an appropriate RPE scale will accomplish much of the same thing. In short, as designed, an athlete with sufficient self knowledge and desire can make each of the Sufferfest series serve a useful training purpose at most any time of the year.

• Check them out at www.thesufferfest.com

• The Sufferfest library has expanded again, with their latest offeringA Very Dark Place
Best described by the Suffer-meisters themselves: “You know that ride you’ve done where you thought you went harder, deeper and to a darker place than you’d ever gone before? Well, this takes you further, deeper and darker than that with offically licensed footage from races like Paris-Roubaix and Liege-Bastogne-Liege and featuring pro cyclists like Phillipe Gilbert, Fabian Cancellara, Thor Hushovd and Bradley Wiggins. Like our Downward Spiral and Revolver videos, A Very Dark Place is about maximum effort for shorter durations: in this case, 4:00 intervals.”

– Check out the preview:

About Matt McNamara:
Matt McNamara is a USA Cycling Level 1 coach with over 20 years of racing, coaching and team management experience. You can find him on www.facebook.com.. Facebook or out on the roads of NorCal. He is the President of Sterling Sports Group and races road, track, and cyclocross. Questions, comments, or training advice? Drop him a line – [email protected]

Giro’12 Preview: Looking Back At The Mortirolo