Just what goes on in a sport science lab and what drives the scientific pursuit of those guys with the white lab coats? We talked to exercise physiologist Dr. Alejandro Lucia of the University of Madrid – one of the foremost researchers into the physiology behind professional cycling, about his work with ibanesto.com, pro cyclists, and more…

Working With the Peloton
Pez: Tell us a little bit about your own cycling background.

A.L.: I am an avid recreational cyclist (yet not talented at all!). I have participated in several cycle-touring events, e.g. La Marmotte in French Alps (~ 180 km including legendary ascents as Croix de Fer, Tйlйgraphe, Galibier and Alpe D’Huez). Two years ago a friend of mine (recreational road cyclist) got killed by a car. Since them I have switched to MTB and I participate in some MTB cycle-touring events (~ 100 km). Road cycling has become too dangerous around Madrid. 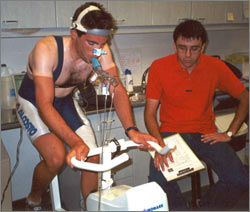 Pez: How did you start out in science and what led you to your current research interests?

A.L.: I went to medical school and once I obtained my degree I decided to move into Exercise Science since I have always loved endurance exercise, and I realized I did not like hospitals so much. Basically, I was very interested in knowing what was happening inside the human body during exercise and why some athletes are so gifted.

Pez: Tell us about your work with professional cyclists. Is your work primarily research-based or do you work with specific teams and riders as a consultant?

A.L.: For several years our research group has been in charge of performing and interpreting the physiological evaluation of the riders in the professional cycling team Banesto (now called ibanesto.com). My role is 100% as a researcher and I am not the physician or consultant of any professional cyclist or athlete. It’s my personal preference that my job with cyclists and athletes starts and ends in the physiology lab.

Pez: Who is the rider or coach that you have learned the most from and what did you learn from them?

A.L.: No doubt: Jesъs Hoyos, the physician from Banesto (now ibanesto.com) who is a co-author of all our studies with cyclists. We owe much to him. He is honest and really a hard worker. 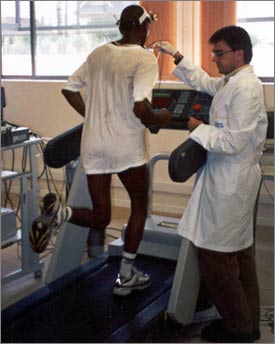 Pez: Which pro riders or coaches have you worked with that surprised you with their approaches to your science? Were there any who really knew their stuff beforehand or were they just happy to learn from you?

A.L.: Professional cycling is a ‘difficult’ (yet beautiful) sport, and not very ‘open’ to new ideas and concepts, at least until recent years. I think most cyclists do not have a very scientific or ‘analytical’ approach to their sport. In this regard, I prefer testing young riders because they are more into training and Exercise Physiology. For instance, one day I tested one of the best time trialists in the world and when I asked him about his preferred cadence during time trials, he didn’t really know what to say. He had never thought about it. This really surprised me!

Pez: What do you find most rewarding about your work – is it working with famous athletes, or the scientific discoveries, or something else?

A.L.: I really like studying the human responses and adaptations to endurance exercise, independently from the fitness level of participants. I really like to test elite athletes because they are unique models. However, I also like testing and trying to help patients. We are currently doing some interventional studies to increase the functional capacity and well-being of cancer patients and elderly people. Some days ago we tested an octogenarian lady (VO2max of 15 mL/kg/min) and one of the best distance runners in the world (from East Africa, VO2max > 70 mL/kg/min) in the same morning. It was nice to study both end-points of the ‘human continuum’ of exercise capabilities.

The Role of Sport Science
Pez: I’ve written about some of your recent published research, such as your investigation on VO2max versus pedaling efficiency. Can you give us a sneak preview of some of the latest work in your laboratory?

A.L.: We have papers in press that compares the physical demands of the Tour de France and the Vuelta a Espaсa (‘Which is harder?’), a case report on the physiological responses of a rider that finished Giro, Tour and Vuelta in the same season. A historical-physiological review on the history of the Tour is also coming. That took a lot of time but was great fun, as I had to scour through documents from the beginning of the last century. We have also submitted a study on whether hypoxic tents increase oxygen transport capacity of cyclists if used during competition. We are also studying East African runners and have many studies with pro riders in mind for the next months (effects of varying cadences on cycling efficiency, effects of specific training of ventilatory muscles on performance, etc.).

Pez: Science and technology has played a major part in the development of this sport, but it has also been part of its lowest moments (Drugs and cheating). Do you feel the benefits outweigh the downsides?

A.L.: I hope so. I think doping (or the reliance on pharmacological substances in general, banned or not) has been a part of the sport of cycling and of its history. I hope young cyclists are changing. I especially admire Francisco Mancebo, because he has finished top 10 in the Tour de France despite being absolutely ‘clean’ (I know this very well) and has a independent personality, really honest.

Pez: What is the most significant contribution you feel you’ve made to sports science personally?

A.L.: I know my limitations very well and honestly I do not think I have made really major contributions so far, although I dream of doing so in the future years. However, I think we have described the physiological demands of actual professional cycling for the first time. What we knew (or we extrapolated) before 1998 about professional cycling was based on studies with non-professional riders. Also, I think we present our data in a simple, practical manner (e.g., 3 HR zones instead of 5, etc.). I think that one problem of training science in general is the use of very complicated and unspecific terms (abuse of the words ‘aerobic’ and ‘anaerobic’, etc.).

Pez: What are some of the tests that you would use to track a cyclist’s progress through the season and through their development?

A.L.: I think incremental tests are not sensitive enough. I recommend intense, but submaximal tests (20-30 min duration) at a fixed power output (about 75% of maximal power output). I would then look at lactate levels and mostly ventilation and efficiency (W/VO2), and how these variables are improved by training over the season. 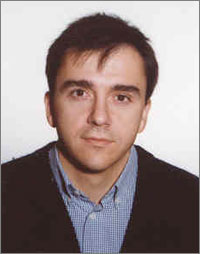 From the Lab to the Road
Pez: What do you feel has been the biggest scientific advancement in the training of cyclists in the past decade?

A.L.: I think HR monitors have allowed cyclists to learn more about their bodies. For instance, all of them know that if they do not reach high HR levels during an important ascent or time trial (or during a hard training session), they might be overtrained (or close to). Yes, I would definitively say that the use of HR monitors is the biggest advancement of the nineties in terms of training.

Pez: What do you feel is the single best physical predictor of a young cyclist’s potential?

A.L.: Motivation! Much more so than VO2max or any other variable that can be quantified in the lab. In my opinion, genetics are more determinant in other sports that in road cycling. I do think that training and discipline are the most important, based on the motivation to tolerate a very hard life style.

Pez: What do you feel will be the biggest advance in training science in the current decade?

A.L.: I think power-meters are going to be important tools to monitor and quantify training loads. I think that there is still a lot to learn about training science, since to date most training interventions are based on trial and error. To begin with, we do not even know how elite athletes (including pro cyclists) train! Of course, we know that pro riders cover about 35,000 km/year, but this is not to say that we know how hard do they train, i.e. how do they combine volume and intensity over the season. Not at all! Another good example is the 1-hour record on the velodrome. When aerodynamics factors were removed by U.C.I. rules, the current record turns out to be just 10 more meters to that set by Merckx in the seventies with no specific training at all. It’s time to work on training science!

Pez: If you could give our readers one piece of advice about training, what would it be?

A.L.: Two things. I think training volume (i.e., long hours on the bike) is crucial. I think a big ‘background’ of high volume, low intensity training (several months per season) is necessary to tolerate intense workouts later in the season (SC to Pez readers: I told you so, right?). Second, Training does not only include biking hours. Other interventions off the bike (getting enough sleep, eating well, hydration, massage at least once per week), is also part of training, and even more important than bike training itself! (SC: we told you so again!))

About Stephen:
Stephen Cheung is an Associate Professor of Kinesiology at Dalhousie University in Halifax, Nova Scotia, Canada, with a research specialty in the effects of thermal stress on human physiology and performance. He has been an avid roadie since beginning university in the mid-eighties, and still has non-indexed downtube shifters on his winter bike and wool jerseys hanging in his closet. He can be reached for advice or comments at [email protected]