Hands up who watched Discovery’s much-hyped “Science of Lance Armstrong” show this week. Now hands up who actually learned anything useful from it? Yeah, just what I thought. Luckily for us, Dr. Ed Coyle’s got the real inside scoop on the Physiology of Lance Armstrong…

The hour I spent in front of the couch watching “The Science of Lance Armstrong” is one I’ll unfortunately never get back. Now don’t get me wrong – I’m all for big media like The Discovery Channel bridging the gap between entertainment and education, but I prefer my science like my steaks – lots of meat please.

Great gems of science like “this shoe has carbon fibre!” and “this is the fastest helmet in the world, there’s only one, and it’s Lance’s” was like a teabag in the ocean (i.e., WEAK!) in terms of illuminating the vacuum between my ears. Even the potentially interesting segment on wind tunnel testing was generic pablum guaranteed not to offend nor to stimulate, aside from the explanation of dimples on skinsuits creating turbulent flow that decreases drag. Um, wait, that’s not new; Nike and Descente has used that with their speedskating suits since the 1998 Winter Olympics, and golf balls since kilts were invented… 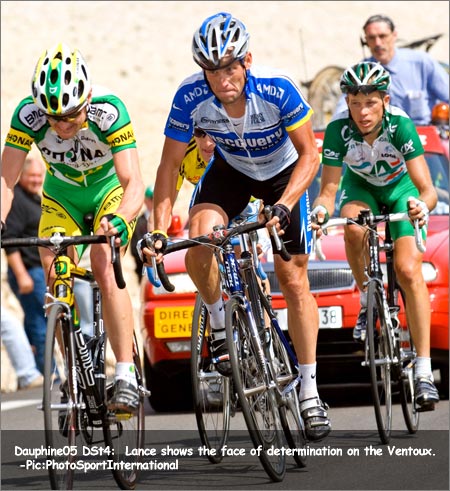 The Problem with Science on Elite Athletes
Luckily for us science geeks, Dr. Ed Coyle from the University of Texas at Austin, who has tested Lance from 1991-1998, has just published a paper in the prestigious Journal of Applied Physiology about the results from five tests spanning his amateur days to post-cancer and through his first Tour win in 1999 (1).

From a scientific view, we’re truly lucky to have data like this. I’m in Slovenia right now finishing a study on cold tolerance in elite high-altitude mountaineers. It’s one of those projects where a cosmic combination of factors and blind luck comes together at the right time to enable the experiment to take place to begin with. Chief among them was getting access to such a big group of world-class climbers, convincing them all to be subjects, and getting them all in one place in a span of three weeks. Therefore, I can vouch for just how difficult it is to get controlled data from elite athletes in any sport.

Most cycling science is done on amateur or semi-elite cyclists, and the results hopefully extrapolate to world-class athletes. Or at best, we get a one-off trial with a top athlete. So it is truly rare indeed to have controlled test data on a world-class athlete like Lance as he matures physically, especially given his bout with cancer in the middle of this.

Transformers!
Chief among the questions both cycling fan and scientists want to know about Lance’s physiology is just how he evolved from a Classics or short tour specialist to the pre-eminent Tour rider of today? The general theory says that he lost a lot of weight, especially upper body muscle, due to cancer, yet retained his power output. Let’s look at the data and see how this hypothesis holds up. I’ll try to keep the math simple enough that even a number-phobe like myself will not fall asleep, and I promise there’s a point!

• Lactate threshold (the point at which production exceeds removal from the body) was reached at 4.5-4.7 L in 1992-93, so about 77% of his VO2max. Again, pretty incredibly high, especially given his high VO2max ceiling!

So no doubt there, Lance was already a genetically gifted and finely tuned machine prior to cancer, but the raw values looked pretty similar as he matured to win the Tour in 1999. Therefore, to figure out his evolution, we have to look a bit deeper.

Efficiency
By far the biggest change over the 7-year period was Lance’s mechanical efficiency on the bike, calculated as the actual work produced (i.e., power to the pedals) as a ratio of the total energy expended. No engine, mechanical or biological, is 100% efficient, and humans are generally about 20-25% efficient (i.e., you’ve used 4-5 units of energy and only got 1 to the pedals), with much of the “wasted” energy converted to heat. Good thing too, because that heat keeps thermophysiologists like me employed!

Over the studied period, Lance’s gross efficiency increased by an astronomical 8-9% Keep in mind that Ferrari spends millions to improve their F1 car’s efficiency by a fraction of 1%! So the absolute power that Lance could produce at a standard energy consumption of 5.0 L/min VO2 increased from 374-403 W. Combined with his weight loss from ~78 kg down to ~72 kg, this means an actual increase in efficiency of 18%!!

How the Heck?
As we are dealing with a single subject, it can be very difficult to tease out general mechanisms for understanding this large increase in efficiency. One thing noted was that Lance has much lower lactate production than observed in other top US cyclists in his peer group, so it may be due to a lower amount produced as well as greater removal by blood flowing to the muscles. For example, training may have increased the amount of capillaries (small blood vessels) in his muscles, making it easier to remove lactate from the active muscles.

The other possibility is that he dramatically increased his percentage of Type I (aka. “Slow”) muscle fibres, which are more efficient at aerobic metabolism. This has not been studied in humans, but has been demonstrated in animal studies.

Lessons to be Learned
OK, there’s enough numbers to make even Sesame Street’s Count Dracula dizzy. But there are important lessons we can all take away from studying such a unique athlete through the years:

• We have almost no data on other world-class cyclists, but Lance is certainly an amazingly gifted physical specimen. Even in a detrained state following chemotherapy, his aerobic capacity was still at the upper limit for the majority of individuals with specific training. So at the very top level of the sport, there is a big mean genetic bouncer guarding the door. Sorry, but we can all still work on unlocking our own genetic potential.

• Even with the above warning, cycling (and probably many other endurance-based sports) favours older athletes with physiological (and psychological!) maturation. In terms of developing cyclists, this means that athletes should be given as much time as possible to really mature and develop before career-defining selections are made.

• Muscular efficiency, and training that target its improvement, seems to be a key to long-term performance. We’ve touched on this before when discussing work studying the pedaling efficiency of top Spanish pros. In turn, efficiency can be targeted by both consistent training and also technical training of the pedaling stroke. That’s one reason the PowerCranks are staying on my bike!

• Weight control and body composition management (keeping the body as lean as possible) is a critical component of peak cycling performance, so proper and periodized nutrition is key.

• Consistent, targeted, and systematic training is the key to long-term improvement! The post-chemo tests showed the huge gulf between a detrained and trained athlete. None of these changes for Lance, no matter how genetically gifted, came from sitting on the couch every day, and the same holds true for us!

The importance of pedaling efficiency

Stephen Cheung is on sabbatical leave from Dalhousie University and spending May and June in Slovenia. Stephen’s company, Podium Performance, also provides elite sport science and training support to provincial and national-level athletes in a number of sports. He can be reached for comments or coaching inquiries at [email protected].