Supplements: An Individual and Evidence-Based Approach

Toolbox: We ride, eat, sleep and repeat so we can harvest the results from that hard work in the competitive season. These adaptations are differently affected by your training volume, intensity, your current status and ultimately by your dietary choices and some ergogenic supplements. Here we’ll go through the ones worth considering from an evidence-based perspective.

The summer season is over and with it, some of us may be already starting to plan training and racing for the season to come. Planning our training is the first step in this process but since some of the training adaptations might be enhanced according to our dietary choices (see previous article on the subject), it may be interesting to consider adapting your diet and possibly including some ergogenic aids for some specific cycles of your training season to help you achieve the best athletic performance possible.

When we talk about training adaptations, these include increases in maximal oxygen uptake (VO2 max) and mitochondrial enzyme activity, which result in a shift towards greater reliance on fat for fuel, increased oxygen transport, decreased lactate accumulation and tighter control of acid–base balance. These will eventually translate into increased performance in a variety of setting that can go from multi-stage racing, time trial performance or one day races.

A variety of supplements have been studied in the context of acute performance enhancement, but the information out there is confusing and often overly optimistic, making us believe that almost every supplement out there works, when actually only a handful is worth considering. 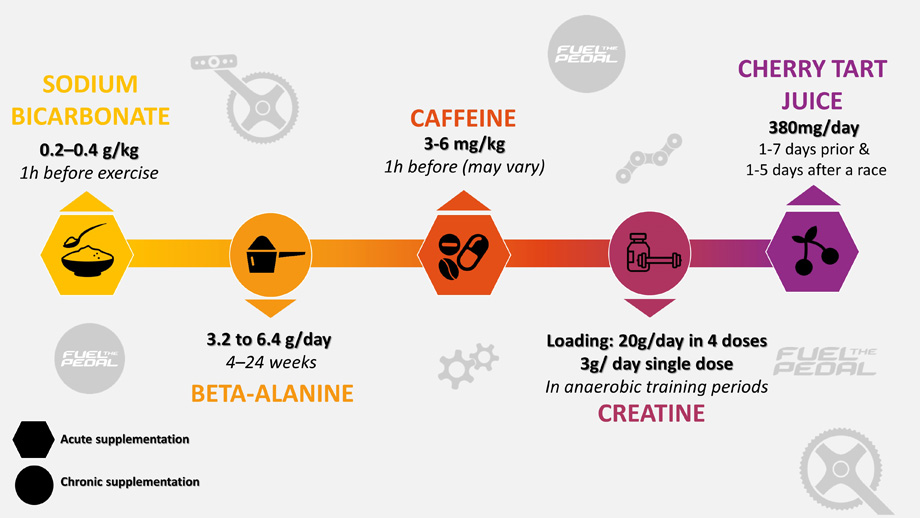 Buffering agents
Supplements that act on buffering and pH regulation may affect the training response by allowing you to train harder, especially during periods of high intensity sets on the bike to improve your maximum power output. When blood pH increases, the rate of muscle glycogen breakdown along with increasing blood lactate levels and H+ efflux out of contracting muscles which basically makes you stop that particular high-intensity effort. One way to buffer this lowering in pH is through ingestion of Sodium Bicarbonate and Beta-Alanine.

Every scientific consensus list on the ergogenic supplements for athletic performance from the past 10 years have always included Sodium Bicarbonate (see here, here and here). Still, this supplement is often forgotten and rarely popular due to its known effects on gastrointestinal distress. Additionally, it’s not commercialized in the same way as other supplements and it’s habitually sold in supermarkets in the baking section and not on the supplement store.

Nonetheless, sodium bicarbonate surely deserves to be the first on the list for its documented effects on regulating pH, allowing you to achieve more power and sustain it for a couple of extra seconds through an acute change in blood buffering capacity.

Sodium bicarbonate is typically consumed at a dose of 0.2–0.4 g/kg of bodyweight, distributed in 1–3 servings, which is often enough to increase bicarbonate concentrations in the blood by 5–6 mmol/L and allow small changes in blood pH during submaximal exercise. Although the effects are generally greater in untrained subjects, sodium bicarbonate ingestion may induce peripheral adaptations that are influenced by pH such as the lactate threshold and mitochondrial respiration.

Starting with lower doses of 0.2g/kg (14g for a 70kg athlete) 1h before training would be advisable to minimize gastrointestinal symptoms. Taking it in capsule form instead of powdered form might be more tolerable for some people.

Another possible way to act on buffering and pH during exercise is to increase muscle carnosine levels through Beta-Alanine supplementation.

Beta-Alanine is becoming increasingly popular among athletes with growing evidence for their use (see here, and here). Although Beta-Alanine is usually present in some pre-workout formulas, increased levels of carnosine require a minimum loading time of 4 weeks.

Beta-Alanine has the potential to enhance training adaptations by increasing the ability to sustain exercise at a higher intensity, allowing athletes to better tolerate greater training volumes, predominantly within 1- to 10-min time frames through a chronic change in muscle buffering capacity.

Current recommendations for beta-alanine ingestion show that doses of 3.2 to 6.4 g/day for 4–24 weeks promote ergogenic benefits. To avoid the uncomfortable feeling of paraesthesia (a typical harmless side-effect of Beta-Alanine supplementation) it is recommended to fraction daily doses into 0.8 and 1.6 g doses at intervals of 3 to 4 h.

Caffeine supplementation can reduce perceived exertion during training and could also complement training sessions performed with low carbohydrate availability by allowing for a greater power to be sustained in a low muscle glycogen state.

When taken in moderate doses (3–6 mg/kg), 2–3% improvements are seen in time-trial performance lasting 6 min to 2.5 h and in high intensity interval training sessions. It has been suggested that habitual caffeine usage will decrease its efficacy but ingesting 3 mg/kg for 20 days continued to produce an ergogenic effect.

Start by supplementing caffeine in capsule form containing 200mg up to 1h before a workout with low carbohydrate availability (which would correspond roughly to ~3mg/kg for a 70kg cyclist) and try using the same protocol for those long weekend training rides.

Our research group has recently published an infographic summarizing the research and practical applications of caffeine supplementation in many sports settings. 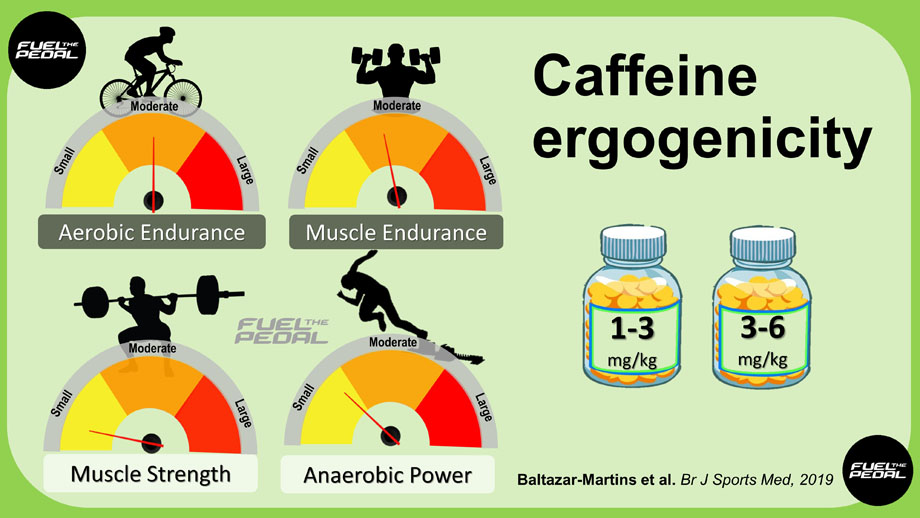 Although supplementing with creatine is not usually associated with cycling and endurance sports, its incorporation in very particular periods lasting 15s to 4min intervals using maximal efforts might be of benefit.

Creatine has been shown to enhance exercise performance across a variety of sporting events, including and HIIT in endurance sports and this has been attributed to elevated muscle content of both creatine and phosphocreatine.

One of the reasons for the creatine to be usually out of the endurance realm, is because of its effect on increasing body mass through water retention. But despite a ~ 2.5% increase in body mass in well-trained cyclists undergoing both creatine and carbohydrate loading, a greater power output during sprint efforts within a simulated 120-km time trial can be observed, using a loading protocol of 20g/day for 5 days, plus 3g per day for the following 9 days.

So, it might be worth temporally sacrificing some extra 1.75kg (considering a 70 kg rider) in a particular microcycle with the objective of increasing your maximum power output. These few extra pounds can be easily dropped in a short period of time with proper supervision.

When aiming for a week of maximal efforts, start by loading creatine on the previous week by taking 20g per day in 4 separate doses with meals (to take advantage from insulin production by carbohydrate ingestion) and reduce to 3g daily until this cycle of training lasts.

Free radicals are produced during aerobic metabolism and play a role in both exercise-induced fatigue and the adaptive response to exercise. These reactive oxygen and nitrogen species generated during exercise act as signalling molecules to increase skeletal muscle adaptation to exercise.

So, it may not be a good idea to supplement chronically with high-doses of Vitamin C and E for example, as they could actually blunt some of these adaptations to exercise.

However, after the base and build phases of training and periodization (once the athlete is in peak of their conditioning), further adaptations may not be the priority (perhaps not even possible). If the focus is now on improving recovery, getting back into full race/competition form as fast as possible, then supplementing with cherry tart juice may have a beneficial role. This would be of value during multiday events and tournaments when the ability to recover and perform at a high level day to day is the main priority.

Additionally, there is evidence pointing out that melatonin also contained in this variety of cherries (Montmorency) can help improve sleep quality. Hence, taking 380mg or 30ml diluted in 200ml of water for 1-7 days prior and 1-5 days after a race might be a good strategy in such periods to improve recovery in multi-stage races or when training adaptations are no longer an objective.

Summary
The above represents the current scientific consensus for best practices. However, do not consider this a blanket recommendation of any and all supplements. Consider carefully the scientific evidence and also whether it’s the right thing for you based on your training priorities and needs. Also, the ideal is to work with a sports nutritionist, especially one with experience in endurance sports.