So you are keen to do resistance training and you are eyeing that squat rack. Heavy weights can have a place in the arsenal of an endurance athlete. If you are going to tackle heavy weights, keep these three keys in mind… 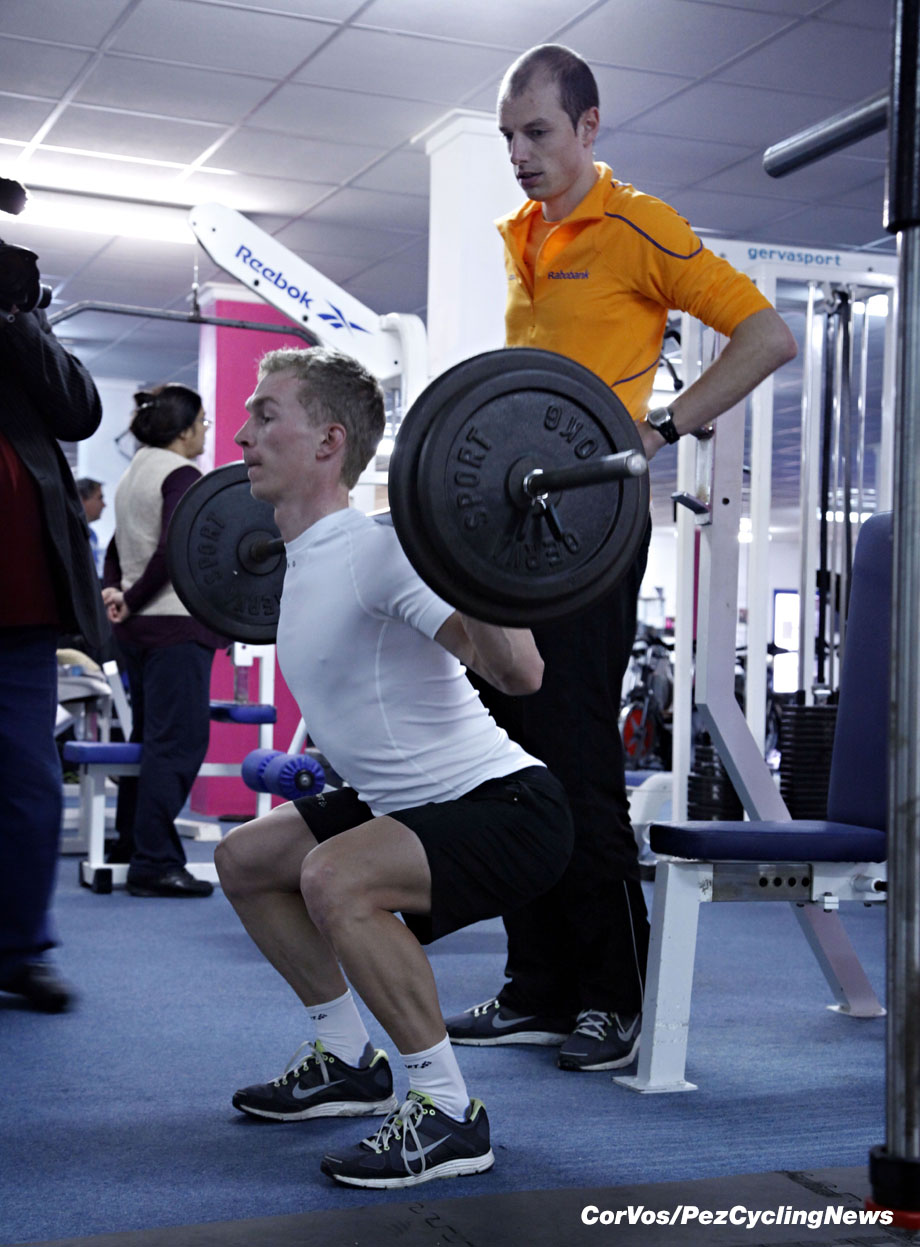 In October 2020 I wrote the article “Cyclists: Beware of Jumping Into Heavy Weights”, which caused quite the stir:

“But the research shows you need heavy weights to progress”

And responses along those lines were seen and heard.

While some took that article to mean that I am against heavy lifting for cyclists, that is not the case. Far from it, in fact.

If you’ve been following the steps and guidance from that article, then this month, February, is about the time to start lifting heavy. . . But there are a few more things you should know before you begin.

Taking the time to use lighter weights and tempo for your lifts, to help you build not only better neuromuscular control but also improved muscle, bone, tendon, and connective tissue properties, are absolute musts to allow your body to handle the heavier weights.

I want to be explicitly clear here:

If you have not taken the last 3 months to follow the advice from “Cyclists: Beware of Jumping Into Heavy Weights” and consistently performed strength training at least 2 days a week, you are NOT ready to do the following.

As such, go back, and follow the advice from that article, performing strength training 2x a week as laid out in the article for 3 months, and then return here. 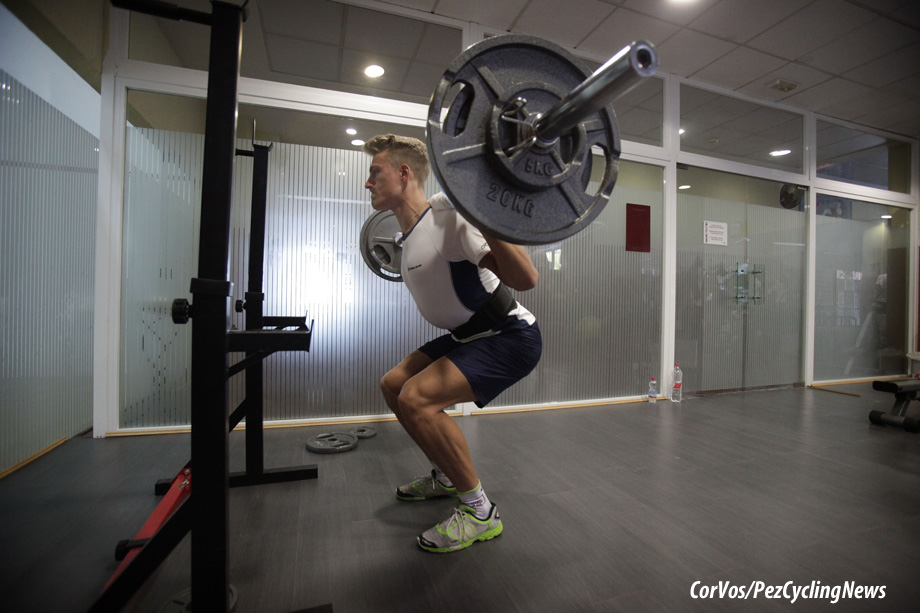 Key 1: Be Kind To Your Spine

From 2000-2005 I was a competitive (drug free) powerlifter. I learned a TON, pun intended, about strength training, adaptation times, and how they differ over a lifespan – something which has paid me its weight in gold throughout my coaching career. Here’s the most important nugget that you need to know when it comes to lifting heavy, over the age of 35.

Lift heavy (by perceived exertion), only one day every 7-10 days.

A heavy deadlift or squat, both of which compress the end plates of the vertebrae, causes microfractures in the bone structures, called trabeculae. These microfractures need time to heal and adapt, allowing you to create adaptations to the training loads, as opposed to breaking you.

This is incredibly important for cyclists for 2 reasons:

While it’s mistakenly believed that the intervertebral discs serve as “shock absorbers of the spine”, this in fact is not true, as the barrel of the vertebrae itself serves this role, through the nucleus of the disc becoming pressurized, causing the end plates to compress down, and causing the trabeculae to bend (and in some cases microfracturing) and the barrel of the vertebral body to act like a spring.

The intervertebral discs serve essentially as “bone spacers.” However, if the tissues of the discs are stressed in ways which they are not designed to handle, the nucleus of the disc can work its way out and herniate.

One of the most potent ways to herniate the disc?

This means squatting or deadlifting with a flexed spine puts you at an incredibly high risk of injury.

This is something that the vast majority of masters riders do. While you’re trying to stay spine neutral, most will not, it’s just a result of the hundreds of hours a year you spend flexed over the handlebars of the bike.

Over the course of the last 3 months you should have been working to improve your technique to the point where you are fluid, strong, and stable, through an entire set of each exercise, especially at the end when you are fatigued.

If you’ve found that you’re unable to get to spine neutral after this time, or that your mid back, spine, shoulders, or glutes give way before your legs tire, then heavy weight is not yet needed.

Rather, you should find a program that helps you address your weakest links, to allow you to move better, with the right muscles firing at the right time, and with great postures & positions.

I’m not saying everyone should have a text book squat. By definition that’s not possible, as we each have anatomical differences that need to be taken into account.  However, you should be squatting with the best technique you can do, through the range of motion you can do correctly and safely. If it’s a quarter squat, then so be it. That’s where you stay. 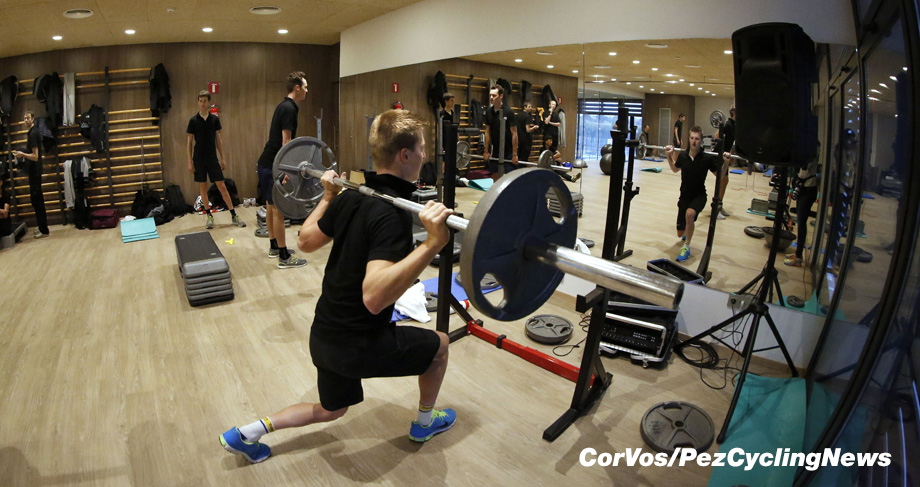 In an article on the Human Vortex Training Blog “When Should Cyclists & Triathletes Lift Heavy Weights”, I covered a few more baseline items which I won’t dive into here, but you should read that in full as well.

Understanding that it takes time to prepare the body to lift heavy, and time for the body to recover between heavy training sessions, are absolutely paramount in keeping you healthy, active, pain free, and building to be the strongest, fittest cyclist you can be.

Menachem Brodie is a USA Cycling Expert Level coach, SICI certified bike fitter, and NSCA Certified Strength & Conditioning Specialist. For the last 10 years he has been working with athletes from around the world to get fitter, faster, and stronger through strength training and in-sport training plans. He has presented on Strength Training for Cyclists & Triathletes internationally, and is the author of 2 authoritative online courses: http://www.humanvortextraining.com/

The Aero Evolution: Pushing the Limits to Cheat the Wind