As Autumn approaches, we typically think of winding down our road cycling season and taking a much needed break. However, this is the perfect time to plan for next year by reflecting back on the current season: Did you reach your goals? If your answer is yes, what goals will you set for next year? If no, how will you reassess and reset? Most of us will be answering both ways as we achieve some goals but not others. Let’s go through some steps in setting up a successful process for evaluation.

In the late 1970s, I was unceremoniously booted off the US National team, not for lack of ability, but because of the perceived notion that at age 32, I was just too old. USA Cycling defines the masters level as a non-elite at racing age of 30 and above. We all know that there are many successful Elite and Professional racers older than 30. Although I did not appreciate being expelled from the team, I eventually realized that my coach probably viewed me not as a team leader but more as an untrainable distraction. Irrespective, the truth was he had done me a favor. I realized his actions motivated me to readjust my priorities and begin my triathlon career.

As I moved into my new sport, I remembered something I had learned a few years earlier. The Chinese use the same symbol for the words “crisis” and “opportunity.” During my military days in Fort Polk, Louisiana, my drill sergeant was doing his best to prepare us for infantry combat in Viet Nam. He told us, “Crisis is an opportunity riding the dangerous winds.”

Ask yourself the following questions, the answers to which will change as you continue to ride and race: What were your strengths during your season? How will you set up your training plan to maintain them? What were your weaknesses? What will you do to improve them? And quite possibly the most important question: What do you look forward to the most when you get on your bike? I submit to you that if you focus on answering the last question and use your findings to spur your active training this fall, it will help you build the other two when the time is right.

Following the two years of training to win the Ironman triathlon in Hawaii, I continued to ride those dangerous winds as I set out to win the Great American Bike Race in 1982, now known as Race Across America or RAAM. This goal proved personally unrealistic because I did not perform well with the many days of sleep deprivation. I did, however, find that I could take it in smaller chunks and be successful. My 2nd place finish at the inaugural GABR led me to attempt the 24-hour world distance record, which I grabbed in my third attempt in 1987 with a hard-earned 539 miles at the age of 40. As you plan your next season or if circumstances force you to change your plans, re-adjust your priorities and consider your talents, then look at it as an opportunity for personal growth. Go grab that brass ring. 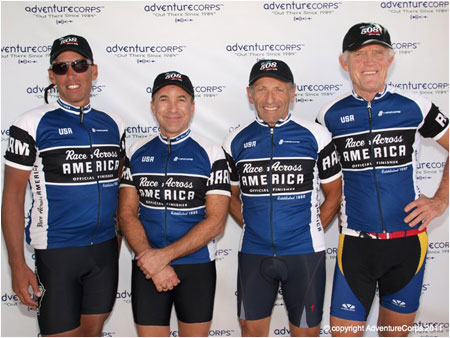 This discovery process ultimately found its way into my coaching practices, assisting my athletes in discovering what they want to do, where they want to go, and what they need to find within themselves. Most goal-conscious masters racers have a passion for training and racing, and define their goals by what inspires them. Your goal may be to tackle that gran fondo, crack the top 10 in your local races, cat up to the next level, or win a state or national championship. Whatever your dreams, set a realistic path of objectives and workable training plan to achieve them. These experiences become the motivators that move your life along the path to satisfaction and fulfillment.

Having coached many masters cyclists and triathletes during my long tenure, I have had to work to keep my clients from doing too much too soon and to embrace recovery work. Many of my masters athletes look enviously at the inflated training schedules of 25-year-old full time professional racers and think that such a plan will work for them. This is a huge mistake. Masters cyclists face a different set of challenges than most younger pros and amateurs do. There is more responsibility and less time to train, and age-related physical changes such as a shrinking VO2 begin to emerge. Masters cyclists who follow a diverse plan of cross-training and sensible mileage will ultimately experience greater success and fewer injuries. This can be a tough lesson for the Type-A masters athlete. It’s a staggering fact that most of the masters cyclists that I have coached who have interests outside of cycling are the ones who end up on the three-tiered podium.

Olympic gold medal swimmers Janet Evans and Dara Torres trained fewer hours and focused more on flexibility and recovery than their younger counterparts as they competed on the world stage in their 30s and early 40s, yet their performances were outstanding. This goes to show that masters athletes can certainly be competitive as long as we remember that proper training and recovery patterns are critical to success. Hiring a coach knowledgeable in the physiology of cycling and racing to guide you through the day-to-day steps will take you to new heights of success.

In the sport of Aikido, masters do not hit their prime until they are in their 80s. Cycling is similar in that tactical knowledge and physical awareness develops over time. This sport can be yours for life.

John Howard is one of the pioneers and true legends of American bike racing, with palmares including: 3-time Olympian, Ironman world champion, bicycle landspeed record, USA Cycling Hall of Fame, and elite and masters national champion. John is also an active cycling coach and the author of Mastering Cycling. Check out more information about John and his coaching at www.fittesystem.com and www.johnhowardsports.com.
Like PEZ? Why not subscribe to our weekly newsletter to receive updates and reminders on what's cool in road cycling?