We have just passed the summer solstice and most of us in the northern hemisphere are facing long and hot days on the bike. There are lots of ways to improve our physical capacity in hot conditions, but can we improve our riding through improving our psychological response to heat stress? 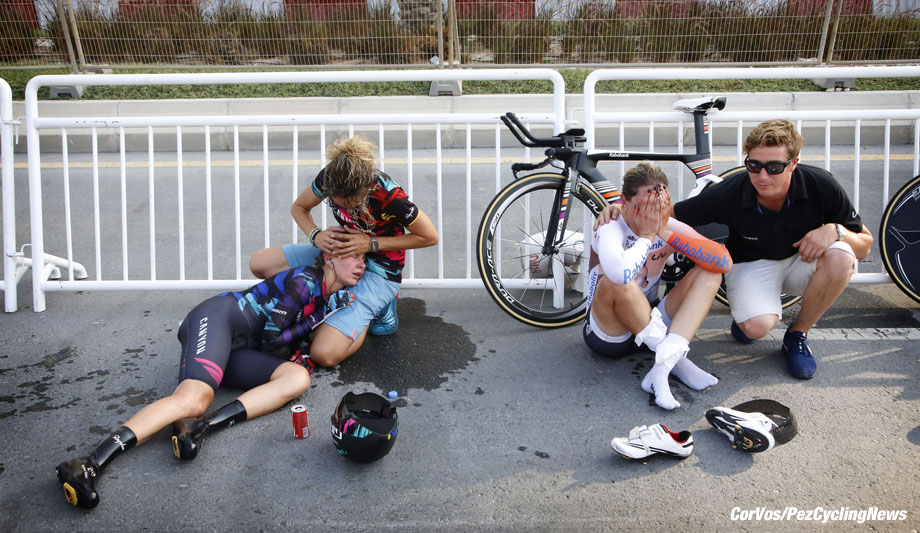 Heat Sucks
There is no doubt that exercising in extreme heat will impair performance compared to cooler conditions. Despite thermal stress being my main area of research, it is still a big shock to the system figuratively and literally when you experience it out in the real world. This was the case for me this past April down at training camp in Virginia with Peaks Coaching Group. Everyone attending had faced a long cool winter and spring. When the weather suddenly heated up to 30°C on the last three days of big rides, all of us were suffering.

For example, despite a very consistent and strong winter of training, including my first dedicated winter cycling camp in California in February, I cracked pretty badly on our climb up the 21 km Thunder Ridge in the Blue Ridge Pkwy. Whereas I averaged 256 W in cooler conditions in 2015, I could only sustain 235 W or so for the first half, then dropped down to about 220 W for the second half.

Beat the Heat – With Your Brain?
While performance is inevitably worse in hot conditions, it may not all be due to physical factors. Rather, it appears that part of our performance is driven by how we perceive the external heat, which in turn influences how hard our brain allows us to work.

One of the first well-controlled studies looking at how psychological factors in training may influence exercise and that he was done by Martin Barwood as part of his PhD work at the University of Portsmouth in the UK. He found that two weeks of broad psychological training, including a mix of goal setting, arousal regulation, mental imagery, and positive self talk, enabled trained runners to complete a remarkable 1.15 km further during a 90 minute treadmill time trial (Barwood et al. 2008).

Wallace et al. 2017
in a study that came out this past January in the journal Medicine & Science in Sports & Exercise, my MSc student Phil Wallace and I took a closer look at the effects of one of those four psychological interventions, namely motivational self talk (Wallace et al. 2017). We chose this focus because we had a hunch that the motivational self talk was the most effective and long-lasting of the four interventions.

Here was our basic study set up.

• 14 male and 4 female competitive cyclists were split into 2 groups (7 males and 2 females per group). Before and after the two-week intervention, both groups perform the same experiment.

• Participants rode at 60% of the peak power output (PPO) for 30 min in 35°C and 50% relative humidity to drive up core temperature. They then rode to voluntary exhaustion at 80% PPO in the same conditions. Our key performance measure was tolerance time to exhaustion (TTE) at 80% PPO.

• We deliberately chose a steady ride to exhaustion rather than a time trial because we wanted to give participants essentially a binary decision. Either keep going and tolerate the discomfort of heat and exercise, or stop. In contrast, a time trial permits riders to vary power output and therefore their workload to match a desired effort.

• Before the experiment, between the 60% and 80% tests, and after riding to exhaustion, participants performed a series of cognitive test. We did this because we wanted to see whether the psychological interventions affected mental function in addition to physical performance.

• The Control group performed the main test before and after two weeks of normal training.

• The Motivational Self Talk (MST) group were individually guided through a two-week program. Through this, they focused on their perceptions to exercise in the heat, understood physical and mental triggers associated with feeling hot, then developed individualized words/phrases to refocus when these triggers arose. They then practised MST on their own over at least three workouts over the two weeks. They were trained to refine and adapt their response words and phrases as needed over time, and recorded a diary detailing their use of MST.

How did things go with the study results? 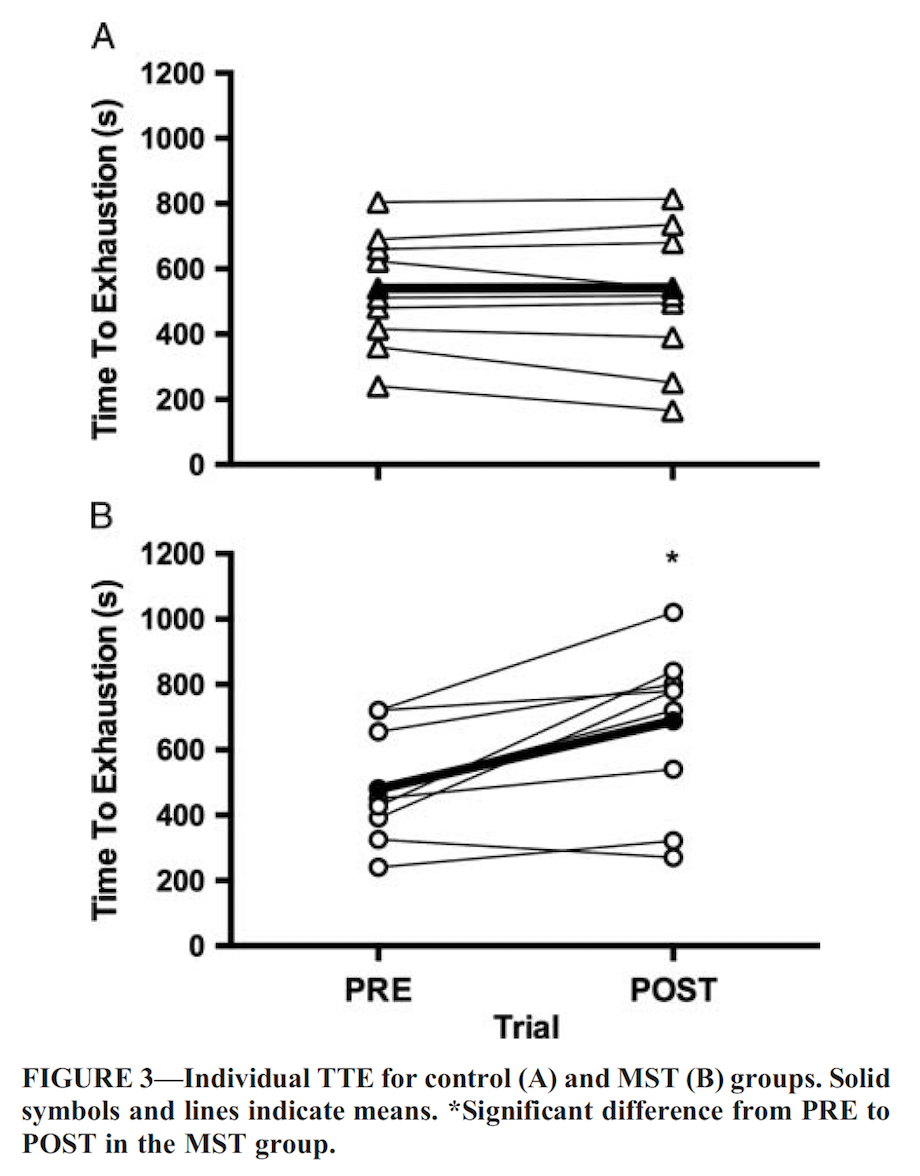 • As expected, the Control group, with no MST or other psychological training, only sporadically reported any focused mental strategy during either Pre or Post testing. In contrast, mental strategies were systematically and consistently used by the MST group during POST, especially aiding in “focus” and “concentration” according to post-study debriefing.

• As expected, physiological responses and performance in the 80%TTE and cognitive tests were similar between CON and MST groups before the intervention.

• Interestingly, the MST seemed to work by prolonging how long you are willing to put up with heavy discomfort, rather than delaying or slowing the rate at which that discomfort appears. During POST, both groups reached a subjective rating of 19/20 in the Ratings of Perceived Exertion scale at about the same time point, but the big difference was that the MST group was willing to tolerate that extreme discomfort for much longer (138 s CON, 274 s MST).

• During POST, the MST group also demonstrated improved cognitive function both at baseline and also during the test. This was found in the executive function or higher-order decision making domain, but not in simpler cognitive tasks. 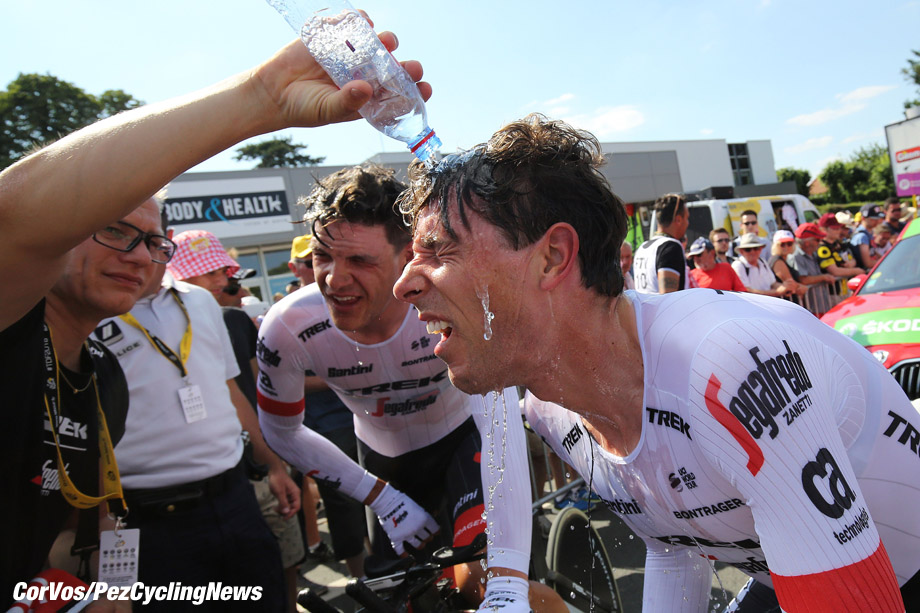 Use Your Brain?
One unique aspect of this study was its pairing of cognitive testing with physical testing. The finding that the MST group improved their cognitive functioning with training is really interesting because it further supports the important influence of the brain and ultimately determining how hard or how long you are willing to put up with strong discomfort.

Another interesting new finding is that, even in quite well-trained individuals, mental training can improve exercise-heat tolerance. This reinforces the plasticity of our mental response to exercise and heat stress. In turn, this is leading to future work I want to do with my colleagues from Brussels, who have demonstrated the importance of neurotransmitters like dopamine in prolonging tolerance time in the heat (Roelands et al. 2015).

So this summer, improve both your physical and mental strategies in order to improve your performance.

Stephen Cheung is a Canada Research Chair at Brock University, and has published over 90 scientific articles and book chapters dealing with the effects of thermal and hypoxic stress on human physiology and performance. Stephen’s new book “Cycling Science” with Dr. Mikel Zabala from the Movistar Pro Cycling Team has just hit the bookshelves this summer, following up Cutting-Edge Cycling written with Hunter Allen.