The heart is a muscle, and can be trained just like any other muscle in your body. Cardiovascular mechanisms and the inability to supply blood and nutrients to the different tissues in the body remain at the “heart” of many of the proposed models of fatigue, so this seems a good place to start our exploration…

Cardio Basics
We started a few weeks back with a general summary of the many models for how the body fatigues with exercise, and the most obvious for endurance athletes is the limits imposed by getting blood (i.e., oxygen and nutrients) to the muscles. Indeed, most of the other models are indirect spinoffs of cardiovascular limits.

One of the things I really focus on with my exercise physiology class is the incredible efficiency of the body. With respect to the cardiovascular system, the resting cardiac output (amount of blood pumped through the heart each minute) is approximately 5 L. That’s also the rough amount of total blood in your body. So at rest, we can make the broad generalization that every red blood cell does one full circuit of your body in one minute.

But with maximal exercise, the body has an incredible reserve capacity, such that highly trained individuals might have cardiac outputs of 30-40 L/min. So that means that same single red blood cell does a full circuit of your body every 7-10 s! All of this is achieved by a pump that is about the size of your fist, and the even more beautiful thing is that it’s all done automatically without any conscious input required.

The capacity of the pump itself is only half of the equation. The other half is the ability of the blood vessels to distribute that blood to the body and especially the muscles. So in real time, the body is able to sense where the blood is most required (e.g., leg muscles for activity, skin for temperature regulation) and maximize distribution there while keeping other systems (e.g., digestive tract) at basic maintenance levels.

Blood and Hematocrit Basics
You almost can’t read any cycling coverage nowadays without hearing about blood tests, so let’s start with the basics of blood composition and the simplest blood test – a hematocrit test. Blood can be broadly categorized as comprising liquid (mainly plasma) and solids (red blood cells that carry oxygen and white blood cells and platelets that ward off infections and help with clotting.

Why is more red blood cells or a high hematocrit useful for endurance athletes? More red blood cells mean more haemoglobin, the molecule that carries oxygen. And nothing determines an endurance athlete’s ability more than the amount of oxygen that her body can deliver to the muscles. If you have more red blood cells and blood than your identical twin, you will be able to maintain a lower heart rate at any particular workload, and also be able to work at a higher workload before really having to tap into your anaerobic (without oxygen) metabolism, meaning less lactic acid buildup in your muscles.

Why is a high hematocrit dangerous? A greater fraction of solids in the blood means that the blood is thicker and more difficult to pump throughout the body. Think of putting super thick motor oil in your car and the strain that might put on your engine. Similarly, a high hematocrit puts a lot of strain on your heart and blood vessels, especially when it’s working hard in training or racing. This can lead to heart attacks or strokes. Remember all the young and elite cyclists dropping dead of heart attacks in the late ‘80s and early ‘90s?

Do blood volume and hematocrit change with training? They do, but it’s not a dramatic change and not the prime reason for increased endurance capacity with training. That’s why an overly high hematocrit is so unusual and an easy indirect marker of blood manipulation.

With training, what we typically see instead is a DROP in hematocrit, due to a rapidly increased plasma volume. In contrast, changes in haemoglobin content is relatively minimal and takes much longer if it actually happens, due to the time delay in actually producing new red blood cells.

In fact, actual changes in haemoglobin is not really a guaranteed adaptation even with altitude training, with a carefully controlled 2012 study demonstrating no overall change (and wide inter-individual variability) in total haemoglobin mass (this is the “gold standard” measure, not the simpler haemoglobin or erythropoietin measurements typically used) after a four-week live-high-train-low protocol (Siebenmann et al. 2012). I found the exact same high variability and no overall change when I tracked a group of elite Finnish climbers before and following a self-supported Everest expedition (Cheung et al. 2014). 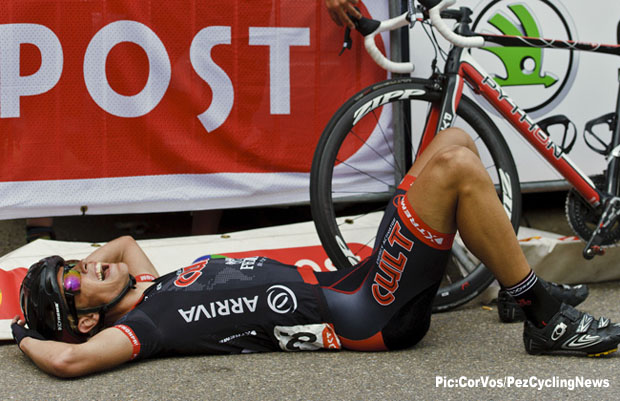 Stage 4 of the 2013 Tour of Denmark was a bit too much for Magnus Cort Nielson, but at least he won

Blood Flow at the Muscles
The crux of the question remains what are the limits of the cardiovascular (heart + blood vessels) system, how does it cause fatigue, and can we train it better? With this in mind, the primary site of improvement comes about at the level of the tissues, with more blood being able to be pumped through the active muscles during exercise. Less is diverted to non-active muscles (e.g., upper body or even non-essential cycling muscles at the leg) and also to non-critical systems like the digestive tract.

We’ve written previously on the use of high intensity off-season efforts by elite athletes previously, and you’ll know that I’m not sure a slavish devotion to a “ceiling” on intensity is appropriate during the off-season. From a physiological perspective, the actual muscle tissues are already saturated with far more capillaries than the body’s capacity to pump blood through them without losing sufficient pressure in the system. So while some capillary building likely takes place, it’s probably not the main training adaptation in the cardiovascular system.

Rather, the main adaptation is likely improving the ability of your body to alter its blood distribution to the active muscles during exercise. So in my earlier example, rather than a red blood cell just coursing randomly through your body 7-10 times throughout your body, you’re training the system’s efficiency such that that red blood cell goes 10-15 times per minute to the important muscles, all without necessarily increasing the overall cardiac output throughout your whole body.

Out on the Road
We all know about the importance of building “base” and putting in the consistent endurance miles. There’s also a stream of thought in coaching circles that you should spend the off-season devoted to keeping a very strict ceiling on your heart rate. The warning typically goes along the lines of higher efforts damaging the process of building the capillaries (the tiny blood vessels actually transferring oxygen to the tissues and muscles in the body). As above, I’m not sure this is the case, but laying down a “groove” in distributing blood to the muscles as efficiently as possible remains a fundamental aspect of training.

That goes hand-in-hand with your muscles becoming more efficient, such that only the muscles most required for a particular movement are activated and there’s less “wasted” motion. Just like golfers spend endless hours trying to perfect their swing so that there is a perfect synchronization of muscle movement, we are trying to perfect the synchronization of our muscles throughout the pedal stroke at the level of both the muscles and also the blood distribution. So from that perspective, pedaling drills, base training and continued focus on steady, “base” like efforts throughout the season remains critical to continued fitness improvement. We’ll talk about this a lot more when we get to the biomechanical model of fatigue.

Part 1: The many models for how the body fatigues