He materialized almost instantly, veering across my path at a nearly perfect angle, for it offered no escape. The deer loomed large in front of me as I grabbed a handful of brakes and swerved, a guttural scream rising with my fear, just clipping the hindquarters of the animal I spun…

The sun dropped slowly behind the hills and dusk settled on the twisting pavement as I entered that favorite section of road. A Sunday night ride squeezed in to save my sanity and burn some energy, I was rolling fast, north of 25 mph, into a soft right hander when I caught the hint of movement coming from the dried out river bed on my left. Large, or so my memory tells me, the deer was likely as surprised as I at our fateful encounter. The pivot through the air is barely remembered, but the impact I remember well.

Instinct brought me quickly to my feet. The wind knocked out of me, I stumbled around for some time (was it minutes?) before two mountain bikers stopped to help. I knew I was hurt, but thought I would simply ride home and lick my wounds. According to my daughter I called her four or five times ranting incoherently before her mom finally figured out that I was hurt and needed help. The mountain bikers managed to tell her my location and soon enough I was on my way to the hospital. The adrenaline started to wear off and the pain set in. 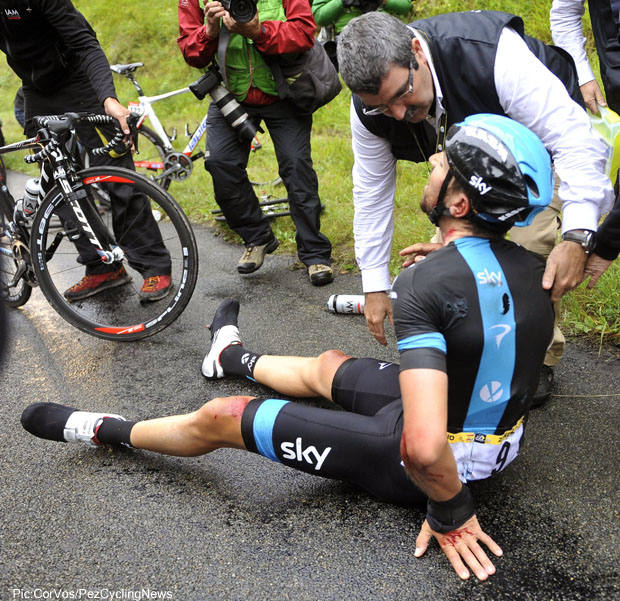 Geraint Thomas rode the 2013 Tour with a broken pelvis

The Pain Culture
Injuries are part of cycling. Indeed, in a paper documenting “The Club-Level Road Cyclist: Injury, Pain and Performance” Dr Miriah Dalquist and her co-authors found that fully 68% of their participants (43 of 63) were “experiencing pain while cycling due to related injuries” at enrollment. Despite the pain, training volume dropped less than 10% (9.6 hours per week vs 10.1) for those reporting pain levels exceeding a 4 on a 10 scale on the Orchard Sports Injury Classification System (OCIS-10) versus those with self-reported pain levels under three. The OCIS is a self report visual scale used to classify injury severity.

This is the culture of cycling. Ignore the pain and discomfort to continue training. Geraint Thomas finishing most of Tour 2013 with a broken pelvis. Laurens ten Dam riding Tour 2012 looking like an Egyptian mummy after a crash. Lauded and mythologized, we look up to those who re-mount and continue to the finish after a fall, we downplay our own injuries and avoid responsibility until the last possible moment lest it quash our ever elusive fitness. But sometimes we cannot ignore the pain.

The Crash Culture
That I hit an animal put me in the lowest percentage of accidents by cyclists. According to a study by Rome et al in 2013, a mere 2.7% of accidents involve animals (most commonly on a shared use path vs the open road ironically). At the other end of the scale approximately 63% of injuries in traffic involved a collision with a vehicle, or a fall avoiding such a collision. Cyclists in a dedicated cycling lane who collide, or a fall avoiding a collision made up 69% of accidents, while on a shared use path these two modes made up 44% of accidents. Of particular note from the Rome study was that of all accidents reported 40% were in traffic, 36% were on shared paths and only 8% were in a dedicated cycling lane. Fortunately 58% of reported accidents were minor, 36% were moderately serious and only 5.4% were severe. Given my trip to the hospital and subsequent diagnosis, I fell into the severe category this time…hey, I’ve always wanted to be an over-achiever!

Among the most interesting findings of the Rome study was that 54% of respondents were carrying something, most commonly a backpack averaging nearly 10 pounds! Also of note was that while nearly 95% of those in traffic were wearing helmets, only 69% of those in a dedicated cycling lane chose to wear a helmet. When I hit the aforementioned deer on June 1st I was on the open road, wearing a helmet and carrying only my phone and ID. 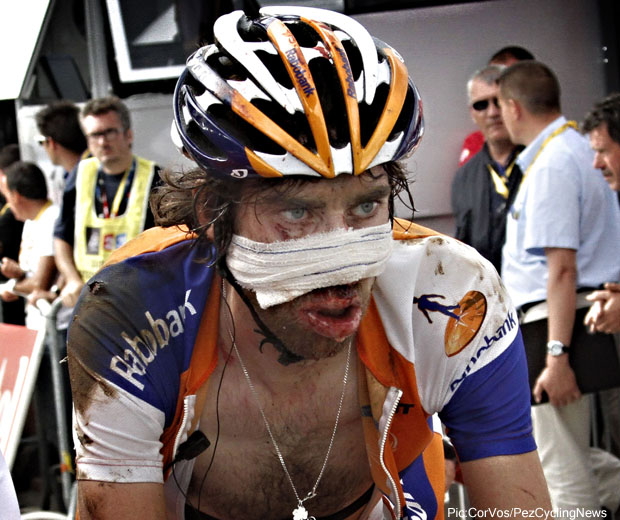 The Recovery
The final tally for my run in with the deer was four broken ribs, a partially collapsed lung, a broken bike, a heavy hit to my head and a mishmash of road rash from head to toe. Recovery was gonna take awhile!

In fact, according to an article entitled “Quality of Life After Major Trauma With Multiple Rib Fractures (Marasco, et al 6/14) the authors noted a study that demonstrated an average of 70 days of lost work/usual activity, while their study noted a typical injury recovery time minimum of 8-12 weeks, with fully 55% of respondents unable to return to work even after 6 months. Then again, they weren’t cyclists!

Those first weeks were brutal! I couldn’t sleep except sitting upright, I couldn’t move without pain and I lost 10 pounds (well, no one said it was all bad!). From the outset I had an idealized vision of returning to riding within five weeks – I had a major rider development camp on my schedule 7 weeks from my injury and I wanted to be ready. At five weeks I tried to ride. A couple of easy hour rides merely affirmed that I wasn’t yet ready to take that plunge, so I took the additional two weeks to allow my body to recover. It was a smart move. When I went to camp I was only tasked with riding a small amount, which gave me, essentially, an eighth week of recovery.

You’ve probably heard the joke about the two bulls on the hill? If I were a younger athlete I might have pushed through the pain at week five in an effort to get back at it, but I’ve been around awhile and although I’ve only had two serious injuries in twenty five plus years of racing and riding I well know the value of letting my body FULLY recover before returning to training. I did not want a nagging residual that carried on for months and years. I like riding pain free and if that meant I lost a full third of my summer to sitting on the couch, so be it. I’ve been back riding now for a couple of weeks and the pain is mostly gone, the joy has returned and the fitness will come again.

Summary
Cycling is built on a culture of suffering. You must suffer to achieve, and cyclists as a group are likely to underreport or even dismiss completely injuries and accidents that might interrupt their training. Yet accidents and injuries do happen, 40% of all reported injuries occured in traffic, 44% on shared paths, and only 8% in dedicated cycling lanes. Of these accidents 63% in traffic are likely due of a collision, or falling from trying to avoid a collision. That number rises to 69% in a cycling lane, and over 75% on shared use paths!

Yet, we ride on. De Rome et al have shown that fully 68% of participants enrolling in their study reported being in pain during riding at the onset of the study. Even when in pain we continue to train at high intensity, averaging less than a 10% reduction in training volume compared to “healthy” cyclists. In the short term this might be understandable given the joy cycling brings our lives, but in the long run athletes in pain would be wise to heed their bodies alarms and allow for full recovery before commencing regular training.

About Matt McNamara: Matt is a USA Cycling Level 1 coach with over 20 years of racing, coaching and team management experience. He is the founder and president of Sterling Sports Group. If you have any questions or comments please feel free to contact him directly at [email protected] You can learn more by visiting his website at www.sterlingwins.com.
Like PEZ? Why not subscribe to our weekly newsletter to receive updates and reminders on what's cool in road cycling?

Janse van Rensburg Does it Again on Vuelta Stage 3

How Tinkoff-Saxo overcomes the heat at La Vuelta