The first part of our bike racing anatomy series took us from the stress of the roll out through to the initial breakaway getting away and the peloton settling in for possibly a long day of cat and mouse. Today we look at how the pack decides to let the break go or not, or what happens if a catch is made…

Watching and racing a bike race is not always a simple matter or power/watt ratio or simply who is the big strong bull who can ride everyone off of their wheels. Rather, a peloton is a living, breathing organism roaring down the road with its own dynamics, politics, and physics, all mixed up with a bit of chaos theory.

Last part of this series on the anatomy of a bike race, we explored the phases of staging and the “neutral” roll out, where it may all be theoretically neutral but the jockeying for position has already begun in earnest.

In elite races, once the flag drops and well before the TV cameras go live, many races start with a frantic attempt by riders to establish or get into a breakaway. This often results in some of the highest speeds of the entire race, which is why you sometimes see professionals warming up even before a 250 km stage.

Once a break goes up the road, the peloton has to decide whether to let it go or not. Our story last time thus ended at the point of the pack starting to ride tempo after the break gains a little gap. Let’s take up the story from there… 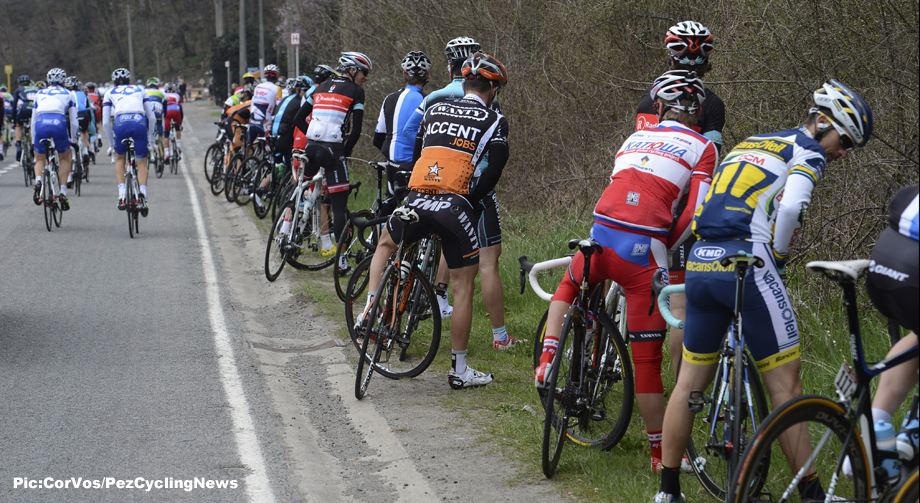 We all have to go sometime

Track 5: More Tempo (and maybe a piss break)
Song: Human by The Killers

Remember when I said at the beginning that bike racing can often be somewhat boring for the pros? This is the part I was talking about. Although I condensed this section in my class to just one or two songs lasting about 7 and a half minutes, this in reality could consist of two or more hours of steady riding. Doing this day in and day out in a week long stage race definitely takes it toll.

It’s not so much the monotony, but the fact that through all of it you need to stay as alert as if it was the last 3 laps of a criterium. This part of the race is like playing in left field. It’s not what you do, it’s what you can’t do which is lose focus for even a moment and drop the ball when it finally comes to you. This part of the race can be so long and so monotonous, that assuming the break isn’t too threatening, the field may actually stop en mass to empty their bladders.

Track 6: The Turning of the Screws
Song: Piece of Me by Britney Spears

This is the first real turning point of the race. It’s when one of the teams decides to turn the screw. Surprisingly, this may not have anything to do with the break up the road and have everything to do with the teams with the strongest riders trying to decimate the pack, pop the sprinters and put their rider into position to win the race. If it’s a stage race, they may not even care about catching the break, but even if it’s a single day race, the assumption is that this section of the race will be so fast that either the break will be caught or they will get close enough to send a rider across.

The screws can be turned on a climb rudely placed right in the middle of the course, but it doesn’t have to be elevation. There is an element of bike racing that I can guarantee 99% of our readers have no conception of no matter how many hours of racing they have see on tv or how many amateur races or group rides they have done. When there is a strong crosswind coming from the left an echelon forms at the front. Depending on the actual width of the road, there is room for between 10 to 20 riders in that echelon. That leaves 100 riders lined up single file in THE GUTTER.

I’ve capitalized the gutter because it’s a place that any pro cyclist has become intimately acquainted with. The reason you choose to suck it up and ride in the gutter is that at 30 mph with a 30 mph crosswind there is almost no draft from riding directly behind someone. So every rider tries to get as far to the right of the rider in front of him as possible.

In Europe and especially Down Under, I’ve seen a second, third and even fourth echelons formed, but to this day I’ve never seen it happen in the US. Regardless of the surface of the road and the nature of the shoulder, this gutter riding is always incredibly dangerous. It requires intense bike handling ability and plain old guts, but it is so difficult that you can barely see straight because so little blood is being squandered on your brain. It hurts and it is often the turning point of the race. Even if most of the pack is still intact after this, they may be mortally wounded and will eventually bleed out over the final hour of the race. 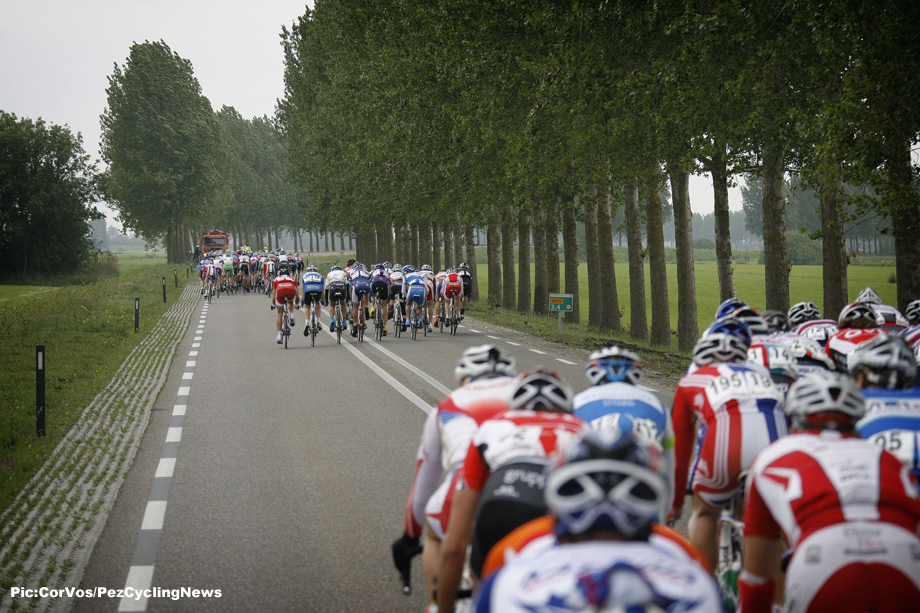 The art of the echelon

So here’s the situation on the road. The break of 5 is still up the road by about 3 minutes. The pack has been whittled down to about 40 or 50 riders. All the major players are still in it. The rest of the pack is safely behind. At this point, there is chance for another little break. Ideally the dropped riders behind have done their job by placing their team leader and a faithful lieutenant into the lead group so they are not worried about chasing.

The riders in the main pack are also content knowing that they have narrowed down most of the variables that needed to be determined in order for their team to win the race. They are also content in knowing that the break has now been up the road for 75 miles and no matter how strong those guys are, no matter how well they are working together, they are getting very, very tired.

Turn the Record Over Next Month
Ok, I know you are white knuckled, sitting on the edge or your chairs waiting to find out what is going to happen, but let’s take a break here and wait till next month with the Tour de France in full swing to find out what happens. Fill in the blanks yourself and see if you can figure out the end game of a bike race as you watch the Grand Depart!