Part of any good training program is a period of rest, recovery, and regeneration from a hard season of riding. Of course, some of us can take it a bit too far over the holidays, with a bit of gluttony and bad weather conspiring to reduce activity and fitness. What’s the physiological process of detraining, and how has it worked out for Miguel Indurain?

Farewell 2014
With less than two weeks to go in 2014, we’re approaching the heart of rest and recovery as winter and the holidays descend. Some of us have already started their off-season training in earnest, trying to regain and build upon the fitness gains from last season. This is also the season for thinking about New Year resolutions and planning our targets for 2015. With this, there generally comes a slight twinge of guilt at indulging ourselves over the holidays, with too much food and too little exercise. My advice about such guilt – forget about it.

In 2008, I discussed a study by the late sport scientist Aldo Sassi (trainer to Cadel Evans) on seasonal variability in fitness amongst top professional cyclists. The key point of that article was that even top racers permitted their fitness to drop quite significantly over the off-season, with VO2max dropping from 76.7 to 69.4 mL/kg/min between the peak competition phase and the off-season phase. Similarly, tolerance time to a set workload also varied dramatically depending on the phase of the season.

Thus, the major take-home message from this study should be that, if elite professionals are able to permit themselves to detrain to such an extent, we should certainly not beat ourselves up for taking some time off and enjoying life without worrying about how it might affect our fitness or performance in 2015. 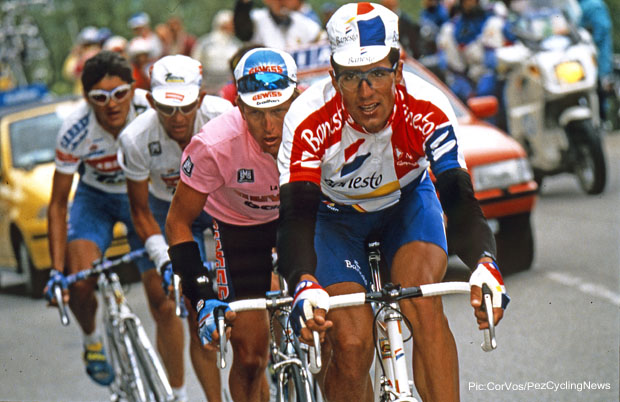 Elite Detraining
Just for fun, let’s see what happens if you’re the elite of elites and then undergo a process of detraining. In the International Journal of Sports Physiology and Performance, Dr. Inijo Mujika presents a case study report on exactly that process (1). Who did he find as the elite of elites? How about 5-time Tour de France (and 2-time Giro d’Italia) winner Miguel Indurain?

During his Tour winning career from 1991-1995, Big Mig was truly heads and shoulders above the peloton, and that wasn’t just due to his tall stature. Of all his victories, perhaps the most astounding was the Stage 9, 65 km time trial in Luxembourg during the 1992 Tour, where he steamrolled his competitors and took 3 min out of 2nd place (Armand de las Cuevas) and 3:41 out of 3rd place (Gianni Bugno), effectively ending the Tour battle then and there.

I remember during those years the urban legends coming out about Big Mig, the ones about his resting heart rate of 39 and his lung capacity of 7 L. Pretty amazing all around. Since his retirement in the midst of the 1996 Vuelta, Indurain has kept a pretty low profile and retired to the life of a farmer in his home village, only cycling recreationally. In 2010, Mujika had the good fortune of an opportunity to have Indurain undergo a fitness test in his laboratory.

The Big Mig Retirement Lifestyle
Let’s see what Indurain has been up to since 1996 until the test in 2010 at the age of 46:

• The BIG caveat correctly pointed out by Dr. Mujika. The two tests were performed with different testing equipment and also with slightly different protocols (starting wattage and also the rate of wattage increase), so some of the difference may simply be due to these changes.

How’s Your Retirement?
The first thing to note above is that, while a laughably small amount for a top professional cyclist, Big Mig didn’t really just sit on the couch for the past 14 years. While he was fairly sedentary for half of each year, his 6,000 – 8,000 km per year is close to what most of us age-group athletes would be logging each year. Let’s see what Indurain came up with for the test:

• Lactate threshold and OBLA were at 73.1 and 80.2% of maximal aerobic power, meaning that Indurain could likely sustain a work effort of 330-360 W for an extended period of time. Despite his size of 92.2 kg, this is quite impressive, corresponding to nearly 4 W/kg.

• The really interesting observation was that, while the absolute decrease in VO2max (L/min) was about 12% per decade, the relative decrease (mL/kg/min) was about 20% per decade. This pattern of difference between absolute and relative was consistent with all the aerobic measures, indicating that post-retirement weight gain impacted the results much more so than actual physiological changes.

Summary
So looking at Indurain’s test results from 2010, the data is very much in line with what I would expect from a typical, well-trained age-group cyclist putting in 6,000-8,000 km per year on the bike. That’s pretty impressive for a 46 year old who does most of his riding in 6 months of the year.

A few takeaway messages from this unique insight into the process of detraining from a super-elite athlete I believe. The first thing to note is that change is inevitable with age if you decrease your activity level. Of course, the big issue is that Indurain detrained from a supremely high level of activity and fitness, so that may be quite a different response from if we detrained from our much lower level of fitness. Would the rate of decline be more or less for us? That’s not known.

I did find quite interesting that body composition changes, in this case weight gain, may have accounted for a greater proportion of changes than any physiological detraining. This really highlights the importance of weight management for cyclists, and also the effects that getting rid of excess mass can have on our performance.

For those of you coming back to cycling after a few years away, welcome back! You haven’t really lost that much physically, and I hope that 2015 and the years beyond find you healthy and flying on two wheels, enjoying the sport that you’ve fallen back in love with again.

Reference
1. Mujika I. The cycling physiology of Miguel Indurain 14 years after retirement. International Journal of Sports Physiology and Performance 7: 397-400, 2012. 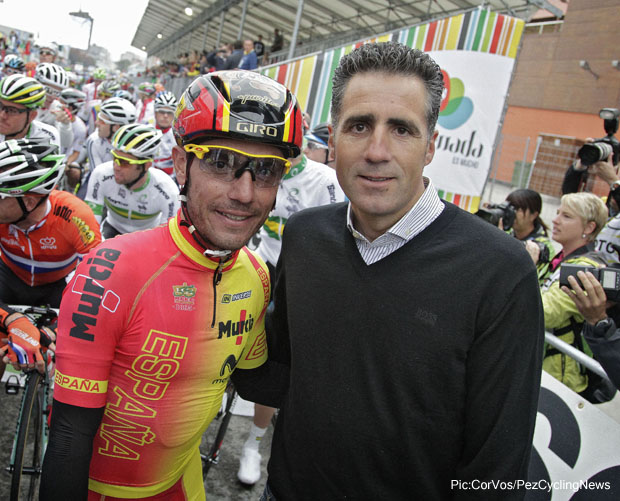 The new and the old, Joaquim Rodriguez and Miguel Indurain at the Worlds’14