Last month we discussed the idea of front-loading periodization, where we overloaded the hard efforts of a four-week training block into Week 1. I promised to test the concept on myself, plus I convinced a couple of others to join me. How did things work out?

Mid-January, I embarked on a four-week cycle a bit different from what most of us do during both the off-season and the main cycling season. We started with two concepts:

1. Block periodization. Rather than do a variety of training over the course of a week (or microcycle of 5-10 days), the idea of block periodization is that we focus primarily on one type of training in order to maximize the resultant stimulus. So for this training block, I focused primarily on VO2max-type efforts of maximal intervals over 8 min. Five of the eight interval days consisted of 4×8 min maximal efforts, with 4-6 min recovery in between. These were suggested by Seiler et al. (2013) as producing the highest performance gains compared to 4×4 or 4×16 min sessions.

2. Front-loading periodization. This concept is a refinement to block periodization, and the idea here is to really maximize and overload training stimulus. Rather than spreading out eight hard interval sessions over the course of four weeks by doing them twice a week, the idea is to stack the majority of the hard efforts into Week 1. This should put the body into a state of FUNCTIONAL OVERREACHING, which is the productive or useful type of stimulus. Assuming we give ourselves adequate recovery, this stimulus should force the body to maximize its rate of super-compensation, ultimately resulting in greater gains in fitness. Too much stimulus or not enough recovery though, and we can hit a state of NON-FUNCTIONAL OVERREACHING, which may take months to recover from and eventually lead to OVERTRAINING SYNDROME and burnout.

This was exactly what was found by Rønnestad et al. (2014). There, the block/front-loading group had significantly higher performance gains than the control “standard” periodization of two hard efforts a week. This was despite the overall workload being identical in the two groups. 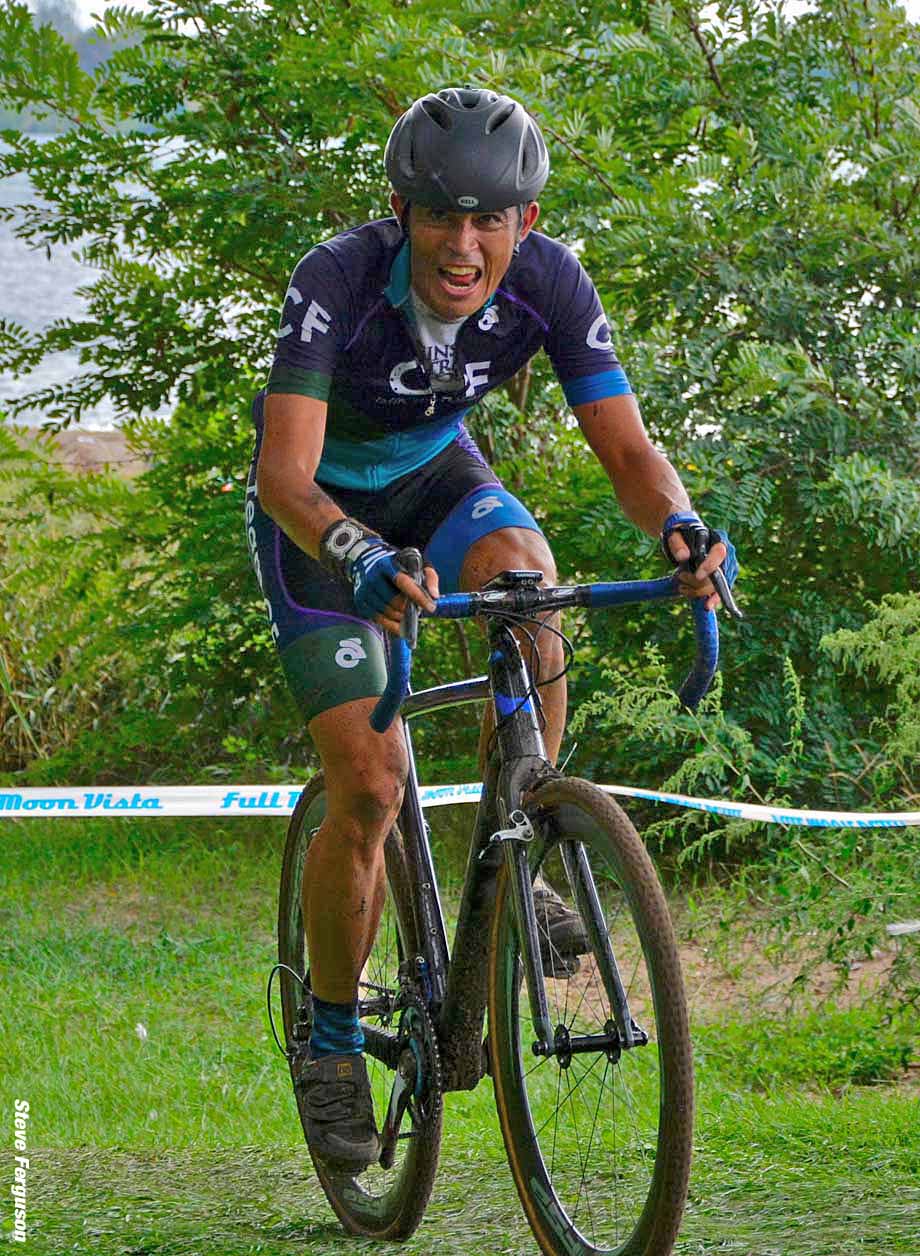 My Favourite Guinea Pig
So as noted last month, I followed this front-loading plan, with five hard sessions in Week 1. They were all done on my trainer in Zwift, and the two 4×8 min workouts were either on Box Hill on the London course or else Mt. Watopia. The other three workouts were short intense efforts according to Rønnestad et al. (2015), with 3 sets of 13 reps of 30s max with 15 s of recovery.

Because we all know that misery loves company, I recruited my buddy Sylas (28 year Cat 2, ex-Canadian national team rower and current nursing student) along with my Ph.D. student Matt (26 year old, cycling for 3 years and considering racing this year) to join me.

Week 4: My weight is stable at 65.5 kg over the past week, and my wattages were higher again at 293, 289, 287, and 278 W. Mentally I wasn’t really into the last effort from a sense of satisfaction about how my first three efforts went, and I realistically think that I could’ve earned a higher wattage. That’s a consistent 20 W gain in average power output at the end of the front-loading block!

Three Amigos
All three of us successfully completed our Week 1 block, helped by a lot of WhatsApp encouragement and trash talking.

Matt had 8 min wattages of about 230 W. He crammed his Week 2 HIIT session late at night after a full day at the lab and said he felt lousy but had similar wattages. Week 3 he flamed out, with wattages dropping by about 10-15 W each 8 min effort and not being able to do the 4th effort. His legs continued to be sore and tired this past week, and he wisely decided to drop off the front-loading plan.

Unfortunately, my lab’s busy schedule these weeks have precluded VO2max or 25 min wattage testing. However, the proof of success remains in the 4×8 min efforts serving as their own performance tests. 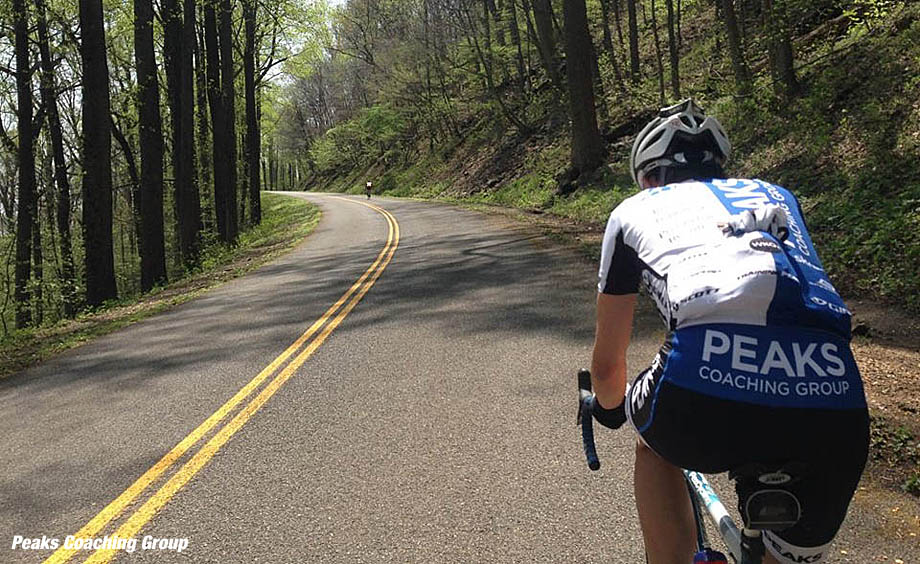 What Did We Learn?
1. Make no bones about it, the front-loading week was HARD. The prospect of five hard sessions crammed into a very brief seven days, on top of trying to fit these workouts in around a busy job and family, can be extremely stressful. So if you are going to attempt this, you need to have support and carefully plan things out so that the combination of hard training and life stress doesn’t overwhelm you. Besides scheduling, it’s important to consider nutrition, recovery, etc. during this hard block.

2. In contrast, Weeks 2-4 were quite easy and stress-free. There was just one hard workout to schedule, and planning the rides on the other days was super-simple, as they were “just” easy recovery or endurance rides where I kept my HR mostly <130 bpm (note that I have a very low threshold HR of about 155 bpm) and my average wattages at 2.5 W/kg or lower. 3. On the flip side, Weeks 2-4 were extremely difficult in terms of maintaining self-discipline. The default mentality of most cyclists and endurance athletes is to flog ourselves, to the point where the recovery and endurance rides were almost guilt-inducing. Week 3 I threw in one “sweet spot” session of 3x15 min, and Week 4 one of 3x8 min at sweet spot. But otherwise I stuck like glue to the plan of nothing but endurance efforts by carefully monitoring both wattage and heart rate. 4. In contrast, Matt ignored my lectures and threw in a hard 3x15 min sweet spot session in Week 2 because he claimed he was feeling so good; rather, the wiser plan would be to completely recover over Week 2 without any additional hard efforts except for the single HIIT session. 5. I feel that such front-loading is only beneficial if you have a foundation of fitness, and this was probably borne out by Matt. For him, with less years in the sport and lower overall fitness than Sylas or myself, this was likely too much concentrated intensity. And since I took almost a month off after the end of CX season, I built back up with a 4 week mesocycle of base and sweet spot training first before this front-loading. 6. All three of us led busy lives during these 4 weeks. Matt had the additional stress of being my grad student, which meant his workload was extremely intense and he had to fit training into really irregular hours combined with a 50-60 min commute to the lab daily. 7. Be extremely careful with your immune system and the risk of getting sick. At the start of Week 4, both Matt and I picked up a head cold that was raging around our department on campus. This was despite my being extra diligent with things like hand sanitizers and getting extra sleep. This bit of sickness probably also contributed to Matt's poor results during the week three interval session. For me, I took one day completely off and then the next two days super easy, spending the extra time sleeping in the hopes of recovering quickly. Summary
I was really nervous before the Week 2 HIIT session, but seeing the big jump in wattage became a huge morale boost and motivation to stay the course through the remainder of the mesocycle. I didn’t really expect a further big jump in Week 3, but was very happy to see the gains were sustained and stable. This also made the further Week 4 jump a happy surprise.

Overall, both Sylas and my improvement of 8 min wattage by about 20-25 W worked out to 7.5-8% gains, very near the 7% observed by Rønnestad et al. (2014) and definitely something that we’ll both gladly sign up for at the start.

The big caveat, of course, is that we were testing ourselves, and it could also have been the case that our improved power outputs would have happened anyway just with our normal training patterns. However, nothing is more fun for a scientist than doing experiments, and I really did enjoy this self-testing. If nothing else, it provided a challenge and added motivation in the midst of winter.

Have fun shaking things up! 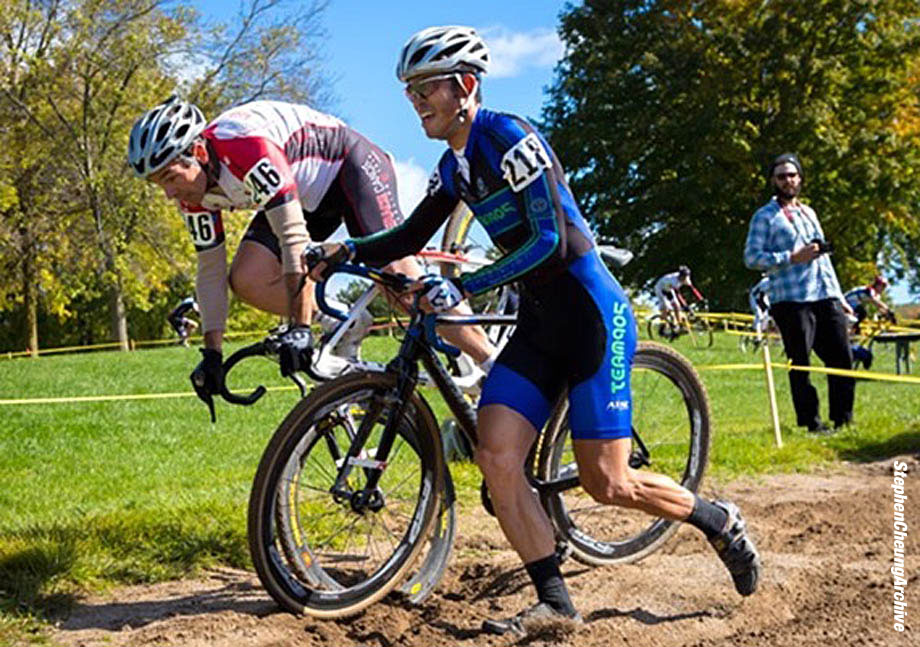