It is rare that we get to see the true physiological data of elite athletes at the very physical peak of their careers. After his second Tour victory in 2015, scientists got to independently put Chris Froome through a battery of physiological testing, and the results have now been officially published. 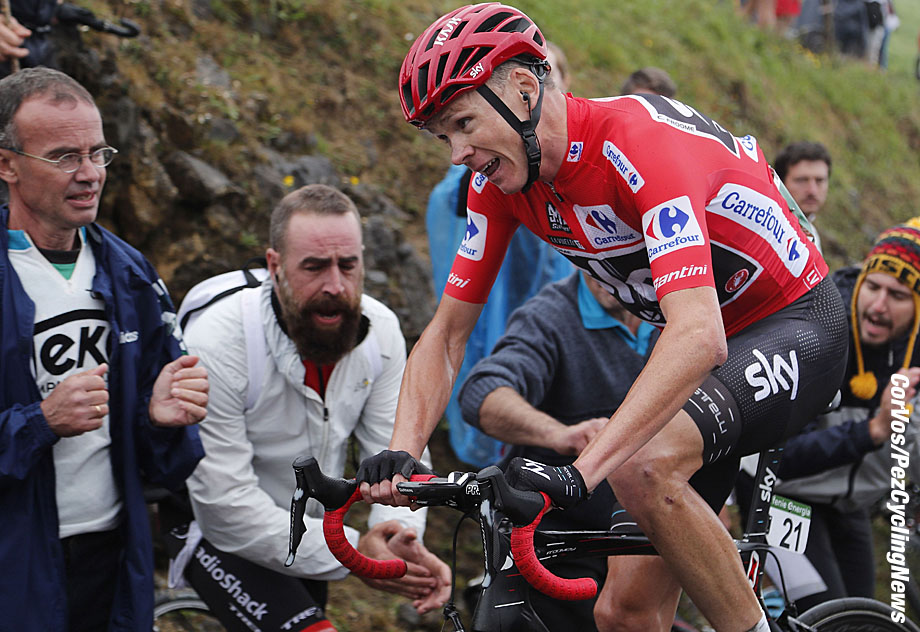 As scientists, we use exercise and, in my case extreme temperatures too, to push the human body to its limits to try to see what the edges of that envelope truly are. In addition, testing those boundaries also permit us to get a better idea of how the body is actually working, often times giving us better insight into basic physiology.

One analogy I often make in my lectures about this use of extreme exercise or environmental stress as a research tool is that of the Formula One racing car design helping engineers understand how to make better every day car engines.

Getting Top Cyclists into the Lab
Over the years, there have been a few studies that have tested elite cyclists. These range from descriptive analyses of things like power output, cadence, heart rate, or nutrition over the course of single day or multi-day races. However, it is very difficult to convince pro-cyclists and their teams to permit outsiders to test their athletes and to release the data.

On a few rare occasions, scientists have been able to get top level cyclists into the lab itself for physiological testing. This included a contentious paper in 2005 detailing different test done on Lance Armstrong from 1993 to 1999. However, in addition to the pharmacological shenanigans that were not described in that paper, the methodology and the calculations of that study have also come into dispute.

Instead, what we are commonly left with is trying to reverse engineer power outputs and VO2max values based on actual race times up climbs, but these involve so many assumptions that the margin of error is extremely wide to the point of being useless. 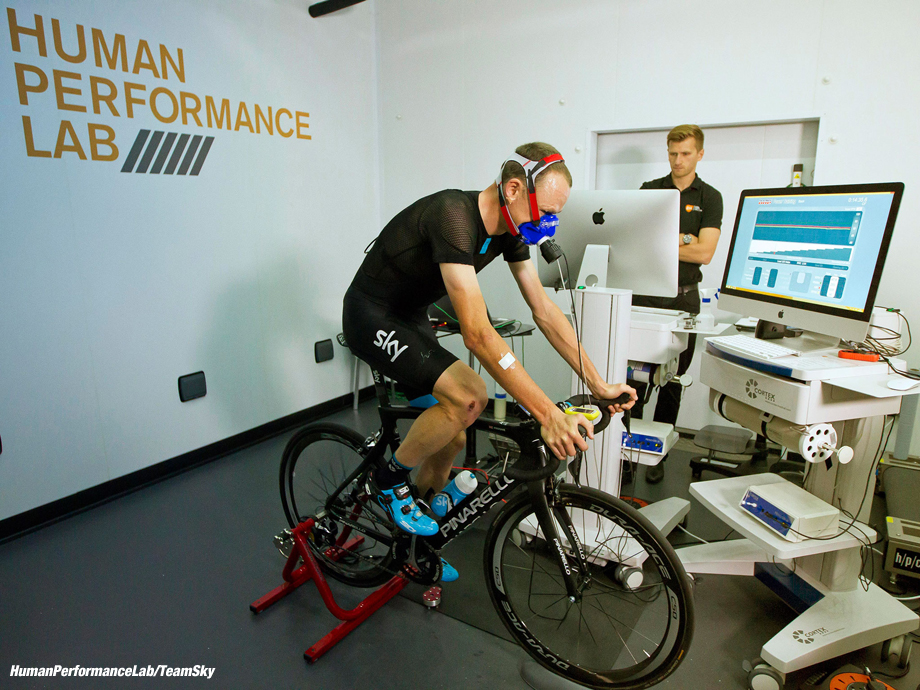 Froome 2015
Enter Chris Froome and his decision to sign up for independent physiological testing in August 2015, in between winning his second Tour de France in dominant fashion and one week before chasing his personal white whale of La Vuelta. I’m not here to get into the politics around why he felt compelled to do so, but as a scientist I am very glad he did.

The scientific manuscript was published just this past week in Med Sci Sports Exerc and I found it a fascinating read. Here is the basic setup:

• Body composition was measured using dual-energy X-ray absorptiometry (DEXA), which is considered the gold standard for body composition measurement. It also permitted calculation of deep body fat mass and fat-free mass that might not be picked up by traditional skinfold measurements.

• All cycling tests were performed using a RacerMate CompuTrainer with Froome’s own bike. Needless to say, all instrumentation was carefully calibrated.

• A submaximal aerobic profile test was performed in both normal room temperature (19.5°C) and in the warmer temperature of 30.0°C and 60% RH. Beginning at 250 W, four-minute steps at 25 W was performed. Lactate was measured in the last 30 seconds of each interval, and the test continued until lactate levels exceeded 4.0 mmol.

• Gross efficiency is the amount of mechanical work performed relative to the actual total energy expended, and overall mean gross efficiency values was calculated for both of the submaximal trials.

• Tegaderm patches were used to collect sweat from four sites on the body for measurement of electrolyte content, with sweat rate determined from pretesting and posttesting weights. 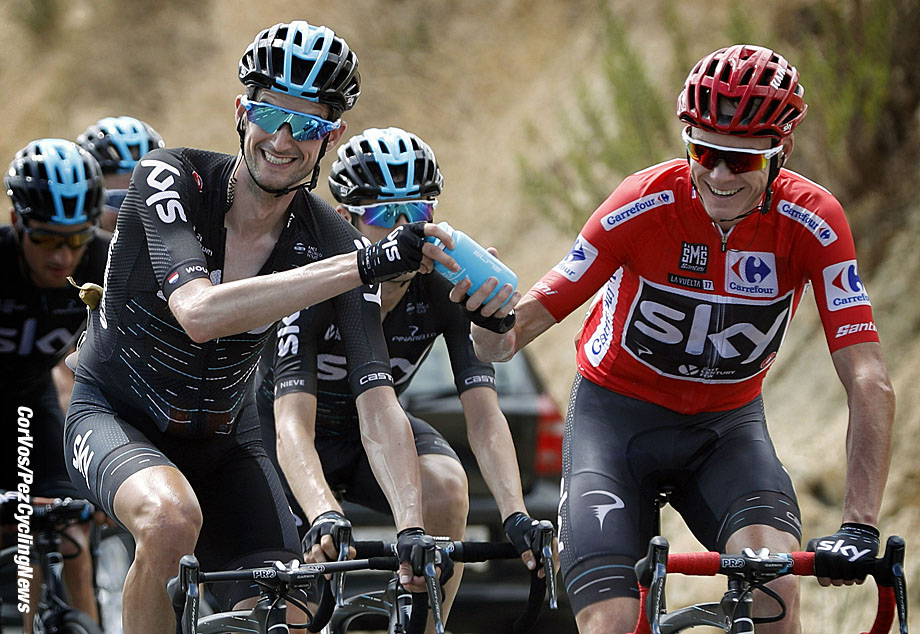 The “Skinny” on Froome
Having done many of these tests myself throughout my career as a scientist, everything that I have read suggest that the testing was done with properly calibrated instruments and using well validated tests. Some of the highlights of the results:

• Body mass was 70.0 kg. For me, one surprise was that, despite Froome’s stick bug figure, his body fat percentage of 9.5% is actually quite a bit higher than the typical 4-5% that are thought to be associated with elite cyclists. Of the 6.7 kg of total fat mass, the DEXA scanning calculated that 0.9, 2.0, and 3.0 kg of fat was distributed across the arms, legs, and trunk, respectively. He did report anecdotally that he gained probably about 3 kg of weight since the Tour, and this may have contributed to the higher-than-expected body fat percentage.

Intriguing Ideas
As noted above, the higher than anticipated body fat percentage was quite striking. If it is true that Froome did indeed gain about 3 kg of bodyweight post-Tour, this may reflect a very sharp behavioural and physiological rebound or compensation for the extreme weight loss for elite cyclists peaking for an event as metabolically extreme as the Tour.

Another intriguing finding was the combination of both a relatively high maximal aerobic capacity combined with a relatively high gross efficiency value. In previous studies done on elite and professional cyclists (spread across all types of riders, not just Grand Tour contenders), the general trend is that VO2peak is inversely correlated with gross efficiency. In other words, it almost seems as if cyclists with lower maximal aerobic capacities compensate for this relative deficiency by being much more efficient metabolically and mechanically. However, Froome seems to buck this trend and have an ideal combination of both a high VO2peak along with a high gross efficiency (commonly 20% or less). It may be that this combination is one of the secrets behind Froome’s success in Grand Tours?

The other thing that intrigued me was Froome’s capacity to tolerate and indeed thrive in hot environments. It is not clear how he is able to be even more efficient at low workloads in the heat, but this is supported by his own anecdotal suggestions that he likes the heat. Being more efficient in hot races would certainly be a huge advantage, and it would be interesting to explore this area further scientifically. 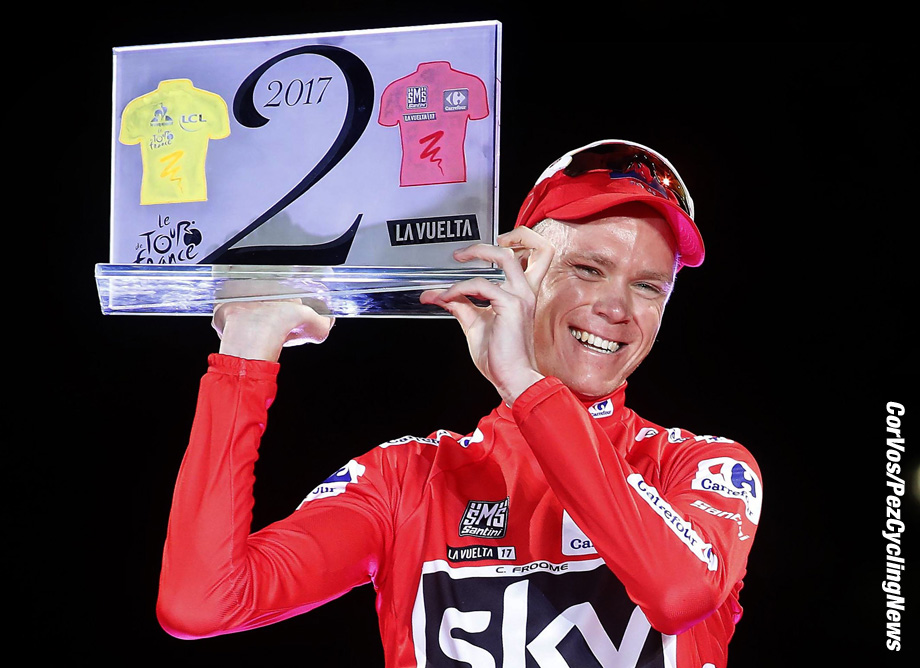 Summary
Many of us have our own biases or perceptions about Team Sky and Chris Froome. However, what cannot be denied is that his willingness to expose himself for independent testing and scientific publication must be applauded. As a fan, I see nothing about this type of transparency and data release that would provide a competitive advantage or disadvantage to elite cyclists, and I would certainly be in favour of more such testing of the top cyclists. As a scientist, I am thrilled to see such data released because doing so provides additional ideas for how humans perform and how human physiology works.

Stephen Cheung is a Canada Research Chair at Brock University, and has published over 90 scientific articles and book chapters dealing with the effects of thermal and hypoxic stress on human physiology and performance. Stephen’s new book “Cycling Science” with Dr. Mikel Zabala from the Movistar Pro Cycling Team has just hit the bookshelves this summer, following up Cutting-Edge Cycling written with Hunter Allen.