Toolbox: Getting Hot and Fast

It’s been a record summer of heat in much of the Northern Hemisphere, and the traditionally ‘muy calor’ Vuelta d’España is just about to start. What happens with heat acclimatization, and can it improve performance in either the heat or in cooler conditions?

Introduction
I’m spending this week visiting my parents in Vancouver, where the severe drought conditions had led to huge wildfires in the province and heavy water restrictions. And back home in Ontario, the summer has been warmer than usual, with multiple weeks of heat warnings coinciding with the Pan American Games being hosted in Toronto.

We’re now a year out from the Rio Olympics 2016, which has a good chance of high heat and humidity. Stifling heat and humidity is an almost certainty come Tokyo 2020 (being smart thermophysiologists, we’re having a big conference in Japan in 2017, but we’re deliberately avoiding its traditional summer slot and delaying it until the much nicer November time period). And of course, Qatar is the site of the cycling road Worlds in 2016, and possibly the football World Cup in 2022 unless FIFA implodes. 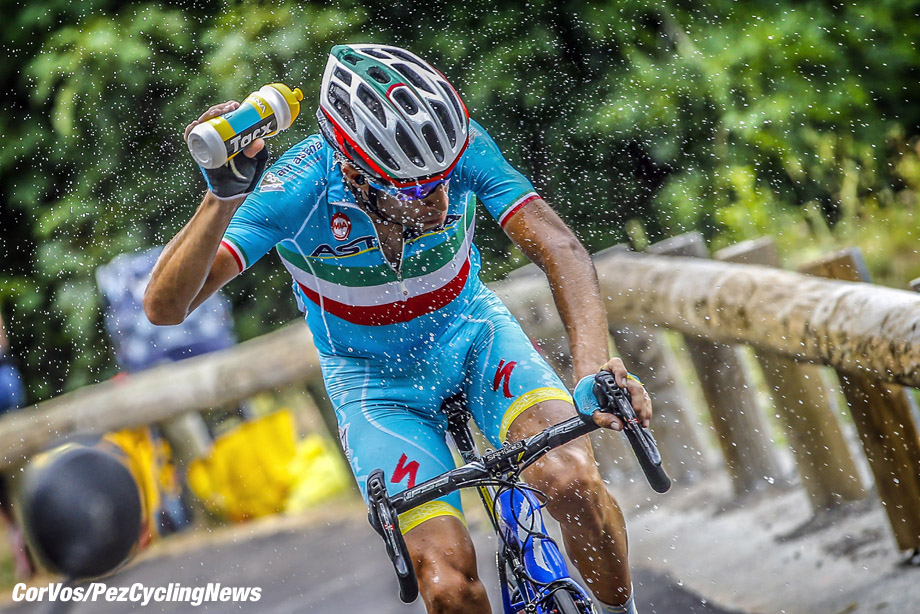 Adaptation: The overall responses by humans to a different environment such as heat. This can include both physiological (e.g., increased sweat rate) and psychological (less perceived distress) responses.

Acclimation: The process of adaptation through “artificial” stimulus. An example is Bradley Wiggins training for Vuelta 2011 in his garden shed with the heaters turned up.

Acclimatization: The process of adaptation through natural exposure to the stimulus. So for heat, this would include moving to a hot environment – training and living there – for several weeks before competition.

Habituation: Generally refers to the psychological desensitization to a stimulus. Put your hand into cold water. The first minutes feel painful and horrible, but that feeling of strong discomfort fades after a while, even though your hand itself may actually be at a lower temperature.

Heat Adaptation
Scientific research on our physiological responses and adaptation to prolonged heat exposure is quite well studied. My colleagues and I are currently working on a meta-analysis objectively quantifying the degree and timecourse of adaptation, and this included carefully analyzing about 100 papers using all sorts of different heat exposure protocols and testing different outcomes.

In general, humans have a high ceiling for physiological adaptation to prolonged heat exposure. Some of the major changes include:

• An increase in plasma volume – the liquid component of your blood – resulting in an elevated total blood volume. Note that hemoglobin and red blood cells typically do not increase, so hematocrit generally decreases with heat adaptation.

• One consequence of higher plasma/blood volume is decreased cardiovascular strain from pumping blood to both the muscle and skin, resulting in a lowered resting and exercise heart rate.

• Sweating rate increases, raising the capacity for evaporative heat dissipation. Of course, the flip side is that there is an increased rate of dehydration.

• Sweat becomes more dilute as the sweat glands become better at reabsorption of electrolytes. This helps to minimize overall electrolyte loss with the higher sweat rate.

• Both separately and in conjunction with the above physiological changes, perceptual sensitivity to heat decreases, with a lower thermal discomfort and ratings of perceived exertion while resting or exercising in the heat.

Nobody really disputes that these changes occur, but the devil is in the details for sport scientists. Specifically, what are the best and most efficient heat exposure protocols? How much daily exposure (Time? Intensity?) is required for optimal adaptation? How does other individual factors (e.g., fitness, hydration) impact the rate of heat adaptation?

Does Heat Adaptation Work for Cyclists?
We are currently analyzing the data to answer the above questions about optimal protocols, and I’ll of course report back our findings as they arise. In the meantime, my colleagues in Qatar and Denmark have collaborated on some interesting studies to test the timecourse and efficacy of heat acclimatization on cycling performance (Karlsen et al., 2015a; Karlsen et al., 2015b). The general setup:

• The heat acclimatization (HA) group was transported to Qatar (6 h flight, 2 time zones), where ambient temperatures were in the 30-36°C range.

• Power data was obtained with PowerTap wheels, with each rider using the same individual wheel for all testing.

Obviously, the outdoor environment and differing wind conditions can have an effect on the results. And of course, the two courses in Denmark and Qatar may have been similar in distance and altitude, but they are somewhat apples and oranges. This is the price to be paid for a real “field” study rather than lab simulations.

Hot Work, Cool Data
Summarizing the two studies together, we come up with some interesting findings. As expected, the typical physiological responses occurred. For example, resting hematocrit decreased significantly at 6 days into the heat camp compared with the unacclimatized (day 1) state, reflecting a greater plasma volume. There was a trend towards this being maintained at day 13, and also 3-4 and 10-11 days post-camp.

But of course, the brass tacks is the performance data, and specifically the power output before, throughout, and upon return from the heat camp.

First off, no difference in power outputs were seen in the control group that stayed in Denmark (310 vs. 308 W average). 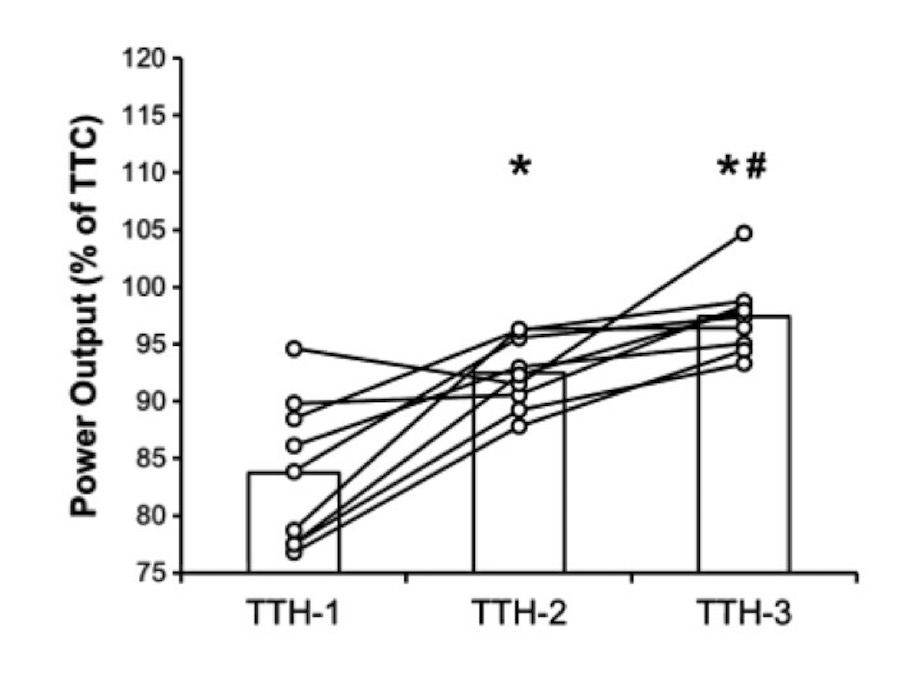 The graph above illustrates the relative change in power output during day 1, 6, and 13 of heat camp compared to the pre-camp TT in Denmark (300 ± 14 W). Some key features:

• Impairment was really marked upon acute exposure to heat (~85% power). This clearly supports the classical consensus that heat stress does severely impair performance.

• Performance steadily improved over the course of the heat camp, with progressive increases in power output at day 6 (+14%) and again at day 13 (+5%) compared to day 1.

• The big caveat is that, although heat acclimatization helped performance, it only ever got the subjects “back to square one.” That is, even after 13 days, their power output only returned to near 100% of what they could do in a quite cold (5°C) climate back in Denmark.

Now the other interesting thing was whether all that increased blood volume, higher sweat rate, and other heat adaptation responses helped the cyclists when they went back to Denmark and competed in a cool environment? The interesting answer is NO. Power output pre-camp was 300 ± 14 W, and post-camp 302 ± 9 W.

Summary
Keeping in mind the vagaries inherent to a field study, these combined studies are highly interesting because they clearly lay out the performance effects of heat acclimatization. Notably, you will be impaired when you first arrive in the heat, so do not expect to be able to perform as well if you hit a hot weather competition non-adapted. Similarly, if you are planning a heat acclimatization camp, adapt your training targets and expectations accordingly. 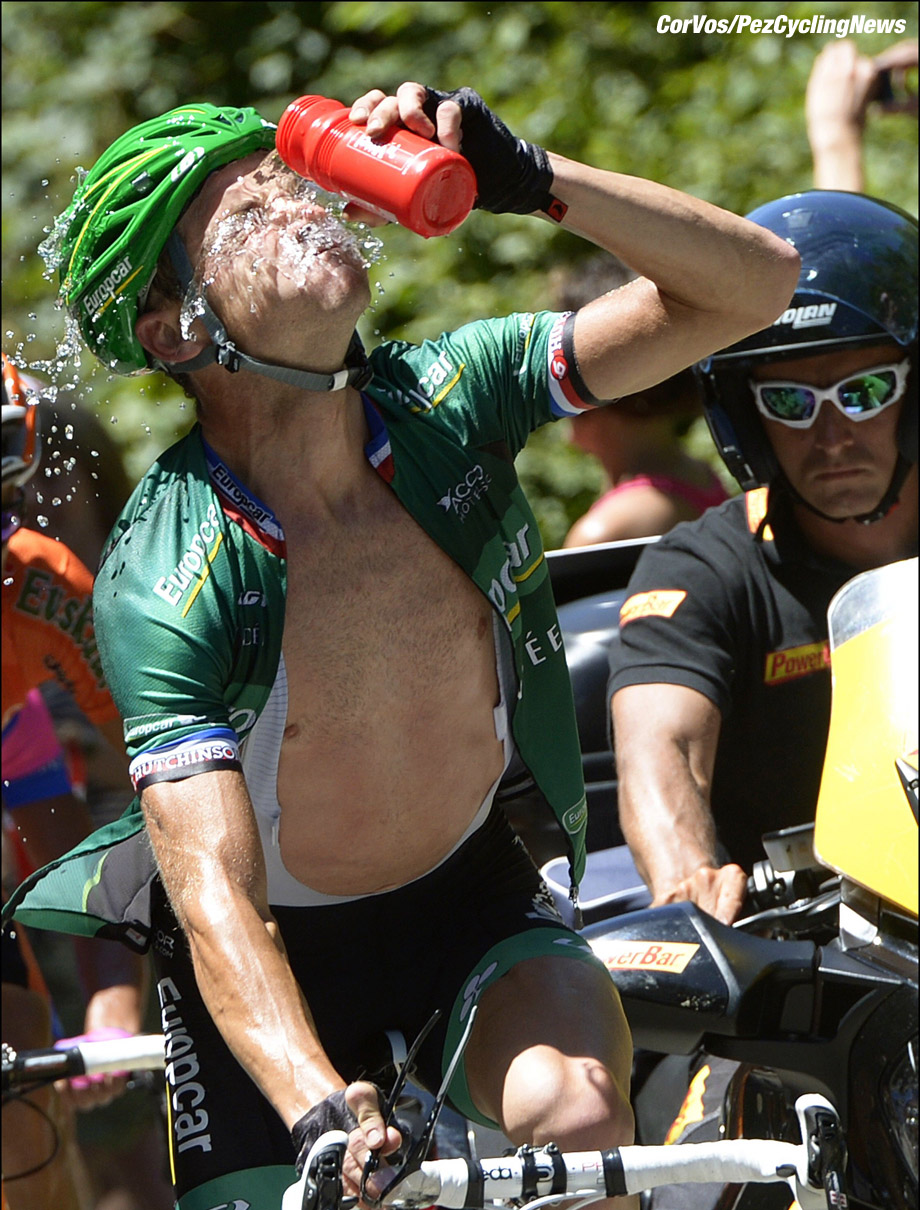