On Saturday night my wife and I went to the wedding of my long time friend and teammate Stuart Press. Stu and I started riding together back in ’98 when I first move out to LA on and he sat us at a table with our old friends, Marco Fantone, Aaron Gadhia and Matias Mendigochea, all from that original squad. We had been cat 4s 12 years ago when we started racing and this year, after Stu’s mid-season upgrade we had finally all achieved the rank of category 1.

The Old Guys
Now, we are “grown ups”, drinking fruity martinis, wearing tuxedos and getting down at the five star Four Seasons hotel in Beverly Hills so it was inevitable that the conversation circled around to the old glory days. It’s nice when you are hanging with the real old guys because it’s not so much about ego (like when you are talking to current teammates) as it is about remembering the truly stupid things we used to do.

For instance, we discussed the time that Marco gave me a 50 mph lead-out during morning rush hour down the 18% Westridge Road (a densely populated suburban street in Santa Monica), to see if I could break the 60mph barrier (I did). In retrospect not that best idea but we were idiots and the only thing we didn’t know was that we didn’t know anything. 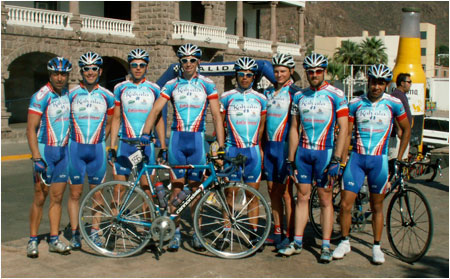 Point of Contention
Inevitably the conversation turned to a certain mid 2000’s State Road Race Championship. The events of that day have been an ongoing point of contention between my good friend/teammate and rival (but in a good way) Victor Ayala who had joined the squad that year and had been Stu’s best man that night. We had a big blow out after that race that neither of us ever really backed down on.

The Setup
Here was the situation. It was a long grinder of a road race. There was almost always an early break that at best makes it to within 15 miles of the finish line before getting caught and ultimately detonated. Victor did a great job of covering the early break that day leaving me in the pack to rest as much as possible and save my legs for the finish. They were out there for a long time, probably 60 or 70 miles.

We were coming up on them fast over the last hill of the day before a long flat windy run in to the finish. It was pretty clear to me that these guys were finished so on that final climb with a nod to Victor as we passed, I turned on the gas and brought a group of five up the road with me and left the break behind. I tried a couple of solo attacks but ultimately had to settle for 3rd in the sprint. I felt pretty good about the result and thought that Victor and I had worked well together. He had done his job in covering the early break and I had come through with a result.

Victor’s View
But Victor was angry with me. When we had finally passed the break on that final climb, we were less than a mile from the top and a flat run in to the finish. Victor felt that I had gotten overly excited. I saw the opportunity to get out in front and to shrink the group but in doing so I had given up the advantage that he had been working all day to set up for us. If I had just taken it easy over that final rise, Victor could have made a herculean effort to hold on to the back of the new lead group and made it with us on to the flats leading in to the finish. It would have been a group of 12 instead of 6 but by having two riders instead of just one, I would have been free to attack while he sat on waiting for the sprint.

My View
My argument to Victor and to myself was that I had increased my odds by shrinking the lead group and that a podium at a state championship road race was not a bad result so we should all be happy. Victor’s argument was that we were the strongest team that day and we should have won.

So this silly argument has been something that we’ve come back to a few times over the year but this time I presented Victor with some new information, something I have known myself for a long time.

He was absolutely right.

What Should Have Happened
I got excited when I saw that open sky between me and the finish line, I was feeling good and I just went. It’s fear more than anything else that creates these kind of mistakes. In a group of 6 I was almost guaranteed a top 5 finish and that’s where my mind was that day. A safe Top 5 finish. What I wasn’t thinking about was winning. If we had come into the final 10k together in a group of 15 there would have been a real chance of losing even a top 10 finish but we also have had a damn good chance to win.

A good team leader should always be motivated by the possibility of a win, but based on what ended up happening, you can see that I was motivated instead by the fear of losing.

I think that’s a pretty common occurrence. People go for the safe top 5 finishes in life instead of shooting for the win. It’s not a fear of putting it all on the line and coming up with nothing. It’s the fear that you will end up winning and you won’t know what to do. When you identify yourself as a top-5-finisher, suddenly finding yourself in a position to win can cause a serious identity crisis. This is a big reason why I push the sports psychology stuff.

Going for the Win
In order to leave this article on a more positive note, I had to think of a time when I went in to a race with the right attitude and it ended up paying off. A day where I had the chutzpah to say, I’m going to try to win this one and then went ahead and took the steps necessary to make it happen. The nugget to gleam from this story is that the attitude itself didn’t win the race but the positive mindset allowed me the presence of mind to exploit my advantage the way I should have done that day with Victor.

The race was on a two-mile circuit in Griffith Park near Burbank, CA. They’d never done it before and they’ve never done it since. It wasn’t widely publicized so there wasn’t a big turn out and I went alone without the team. The race started with a climb and then a short descent, which funneled us down into a steep 180 corkscrew that dropped us down on to the flat back stretch of the course.

The run up to the finish was flat but it bent around a long curve to the left on a thickly tree lined road with a tall stonewall along the shoulder. Suddenly you came up out of the woods, made a quick jog to the right and you were at the finish line.

What I started to notice on each lap was that as we rode along the finishing stretch, with the pack hugging tightly to the left side of the road and the curve and the wall and trees, I could never quite tell when the finish line was coming. We’d just be rolling along on the left side of the road and suddenly it would be right there. Maybe 50 yards. Not even enough time to get up to speed. It wasn’t marked and there were no landmarks to determine 200 meters, 100 meters, etc.

So I think to myself, knowing when the finish line is coming might be useful information towards the end of the race. So for the next 20 laps, every time we would come down that stretch, I would pick some sort of marker on the side of the road and time how long it took us to get to the finish from there. There wasn’t much to go off of, just a certain tree or a break in the wall but through a game of trial and error, by the last lap of that race, I knew exactly where I was going to start my sprint.

I had given myself an advantage. Assuming no one else was using my trick, when we got to the final lap, everyone else would be guessing on when to start their sprint and I would know. The hope was that the pack would wait too long to go and they’d be across the line before they even got up to speed. It worked out like that exactly. I jumped when we got to my tree, took everyone by surprise, opened up a gap and held it to the line.

Summary
What I love about this sport is that I can have a conversation about how I screwed up almost 10 years ago with my old teammate and still learn something new. It’s a complicated sport and I don’t think anyone ever knows everything there is to know but eventually, if you go into a race with a good attitude, the rest will eventually fall into place. 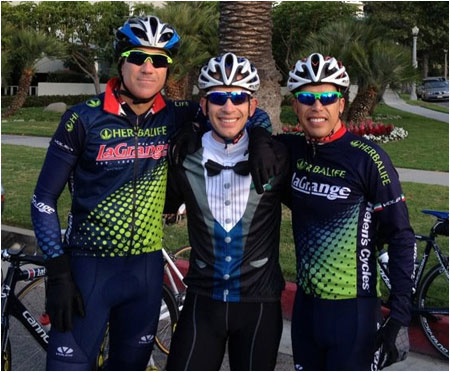 Josh is the owner and manager of the Wonderful Pistachios Professional Cycling Team. Josh is also USCF Certified coach. For more information about his coaching services and any coaching questions you may have, check out his website at LiquidFitness.com. Also, follow Josh on Twitter for training tips and team updates. This is a great way to find out when we will be coming to your town so you can hit us up for some free pistachios. Mention PezCycling News when you see us and we’ll even crack them for you!

PROJECT MOOTS: A Dash of Panache