TOOLBOX: With summer in full swing, there’s no escaping riding in the heat, but hot temps inhibit the body’s ability to perform. Dr. Stephen Cheung is an expert on thermal stresses on human performance and offers up his favorite heat adaptation hacks for cyclists.

Earlier this month, I was an invited speaker at the Science & Cycling conference in Nantes, France, just prior to the start of Le Tour. Appropriately for the sweltering summer weather, I spoke about how heat affects exercise capacity, and our current knowledge about how to adapt to hot weather. 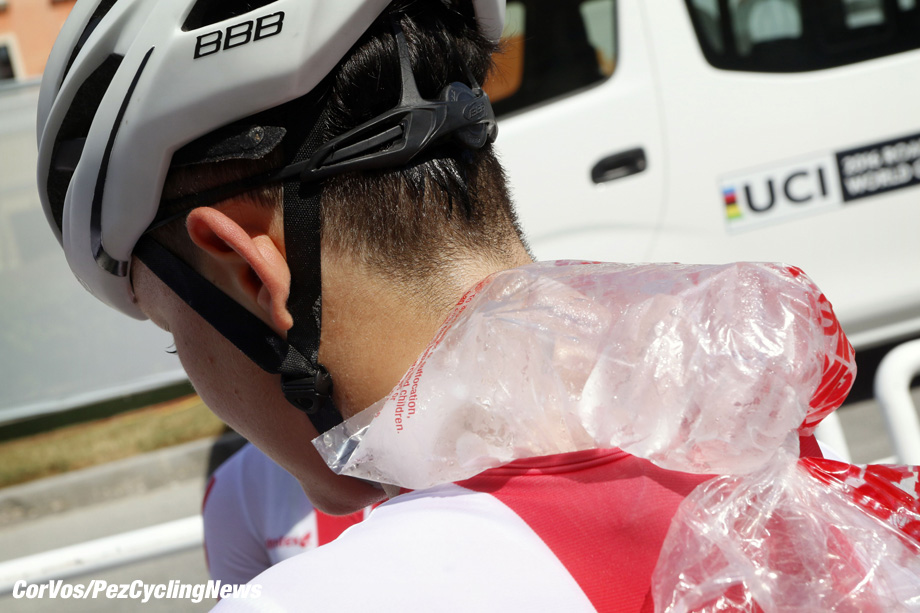 Since 2014, there has been a conference on the science of cycling held in the days before the Grand Depart of Le Tour. The two-day conference is held in the same city as the start, enabling the attendance of coaches and sport scientists from many of the teams. In addition, there are hard-core exercise physiologists like myself, coaches from around the world, performance staff from different national federations, etc.

For my part, I gave a talk on one of my main research areas, namely how heat stress affects cycling performance, along with the current state of knowledge concerning the process of heat adaptation.

What I will do in this article is to summarize the highlights, then link to two other venues for much further information – I call it my heat adapation hacks for cyclists. 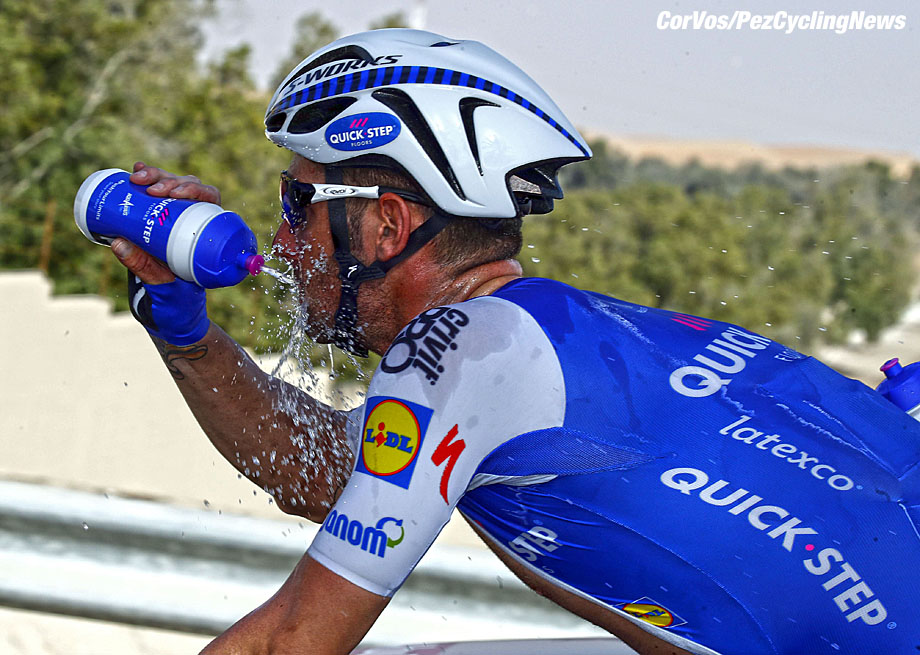 Heat DOES Impair Exercise
First off, heat absolutely does impair exercise, and at much lower temperature than we may think. A nice analysis of multiple marathons across a range of location and years showed that, even a wet-bulb globe temperature (WBGT) of 15°C impaired marathon times compared to 10°C (Ely et al. 2007). This supported a 1997 study from my post-doc lab demonstrating that time to exhaustion was maximized at 10°C compared to 0 or 20°C, with a further impairment at 30°C (Galloway and Maughan 1997).

The 2007 study also showed that the less fit you were, the greater the impact of heat on performance capacity.

How big a decrement does this work out to in real-life cycling? A study in 2015 had Danish cyclists perform a 43.4 km outdoor TT in 5°C temperature, where they averaged ~300 W. These cyclists then went to a 2-week training/heat adaptation camp in Qatar. The day after arrival, they performed another 43.4 km outdoor TT and averaged a 15% decrease in average power (Karlsen et al. 2015).

Heat Adaptation DOES Work
If heat is indeed bad for performance, what can we do about it? While there are many day-of options such as pre-cooling, ice slurry ingestion, etc., the best way to prepare is by a gradual physiological adaptation to exercise in the heat. In 2016, my UK colleague Chris Tyler and I published a large meta-analysis quantifying the results of 92 studies on performance benefits from heat adaptation (Tyler et al. 2016). Some of the key findings:

• Heat adaptation protocols of as short as 4-5 days can be partially effective and better than none at all. However, the longer you can have for heat adaptation (2 weeks or even longer), the greater the physiological and performance benefits.

• There’s no real firm consensus on how hot an environment you need to train in, nor on how long each heat session should be. Most of the studies we looked at used 1-2 hours of moderate exercise, with ambient temperature usually 30°C or greater. 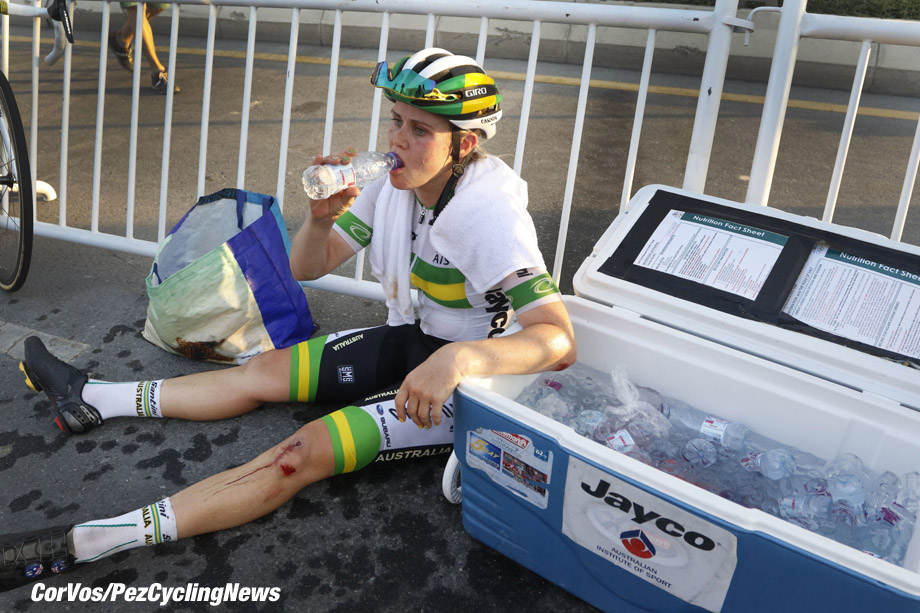 Heat Adaptation Hacks
From our analysis, the main stimulus for heat adaptation is not necessarily some magic formula or ambient temperature, exercise intensity, or duration. Rather, it seems that the main priority is to raise core temperature to a high (but not dangerously high) level, and to keep it there for at least an hour a day. This opens up the possibility of a number of hacks if you don’t have access to an environmental chamber like I have in my lab:

• Wear extra clothing even if it’s already warm out. A new 2018 study (Ely et al. 2018) showed that piling on lots of extra cycling clothing in a temperate environment gets you most – but not all – of the same physiological stimulus as training in a hot environment.

• When training indoors, we all hear about the importance of having a big fan blowing at you to cool you off. One low-tech hack is to reduce or even eliminate the fan.

• After training, when your body temperature is already up, keep that thermal stimulus by having a hot bath or a sauna.

• One new and currently contentious idea is whether mild dehydration DURING exercise in the heat can accelerate heat adaptation (Garrett et al. 2014). You definitely want to ensure proper rehydration post-exercise though to ensure recovery.

The podcast is available on www.scientifictriathlon.com, run by triathlete coach Mikael Eriksson. During my return from Nantes, my wife and I had a long layover in Lisbon where Mikael now lives. So in exchange for a walking tour around the ridiculously beautiful old city, I gave a “live” podcast while we were at lunch near the old castelo.

Last December, I was an invited speaker at the Science + Triathlon conference, organized by the International Triathlon Union in Edmonton, Canada. The topic then was also on heat adaptation, specifically as it relates to triathlon. They had a professional video made of the talk, which is now available on YouTube. 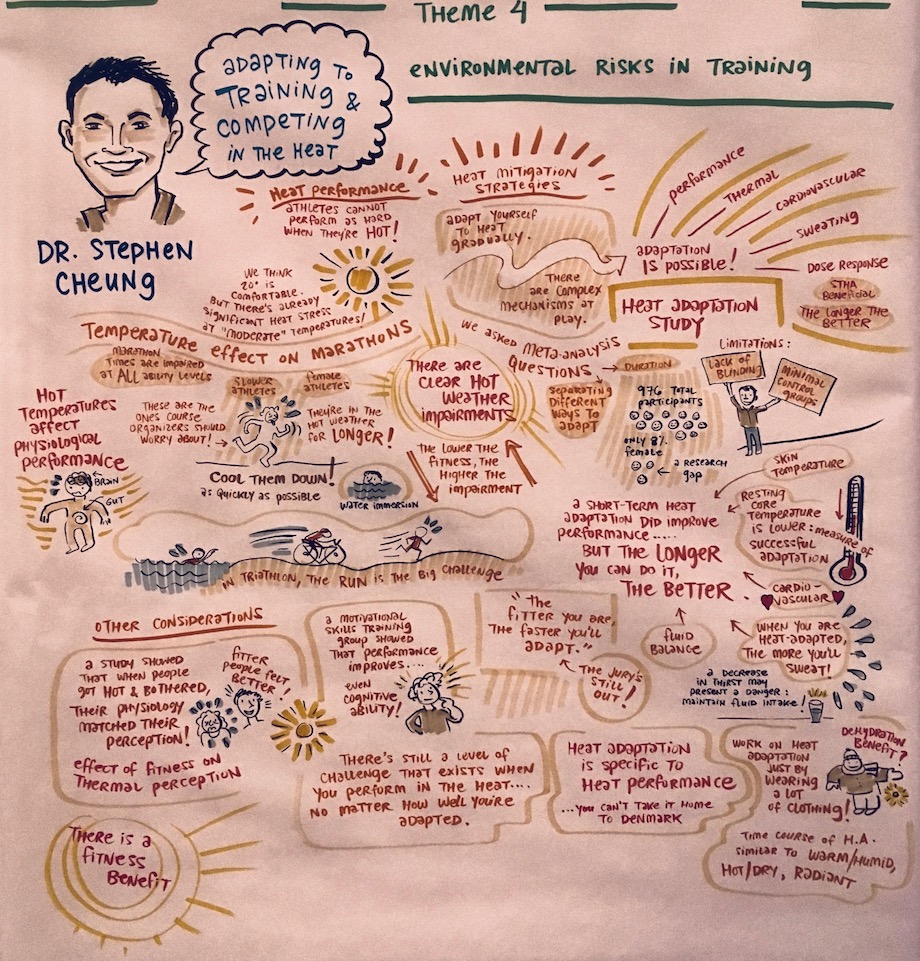 The Edmonton organizers also had graphic illustrator Sam Hester prepare a graphic summary of my talk in real-time. She did an astounding job at capturing the information, and this cool summary is now hanging proudly outside my office door!

DS Mario Aerts About the Team Training Camp in Livigno