As the USA Pro Cycling Challenge grabs our attention this week much will be made of the altitude and its effect on the riders. The entire race is run above 5000 feet (1500m), and much is above 7000 feet (2100m)! These elevations create substantial limitations to the exercising athlete, and also a great jumping off point for a discussion on energy systems and performance.

This weeks USAPCC fires off their third edition of the race with seven stages set against the back drop of the Colorado high country. The race starts around 8000 feet in Aspen, and continues its high altitude traverse of the Rocky Mountains with stages routinely reaching 10,000 feet and above. Most of the pro teams racing have been preparing for the race by coming to altitude early to acclimate. Indeed several of the teams raced the nearly-as-high Tour of Utah earlier in the month, an ideal preparation. The cost and logistics of sending a race team to altitude for several weeks before a race certainly begs the question “what happens at altitude?” so let’s look for some answers…

Altitude Research
Chances are you have a passing awareness that altitude impacts performance, but the how and why are worth a review. The effects of altitude were generally ignored until Bob Beamon broke the World Long Jump record by as astounding 55 cms at the 1968 Olympic Games. That jump set the standard for over 40 years and represents one of those marquee moments in sports – a benchmark for all time, much like Eddy Merckx’s World Hour Record, which was also set, not coincidentally, in the altitude of Mexico City in 1972 (as was Francesco Moser’s 51.151Km ride, although Moser admitted to doping for the ride in 1999). From these performances it is obvious to see the advantages of altitude, primarily less air resistance, but what about the disadvantages?

The common refrain is that altitude, specifically the decrease in available oxygen, stimulates production of Erythropoietin (EPO) by the Kidney, which in turn drives the production of new red blood cells (reticulocytes) in the marrow of long bones to help attenuate the effects. While increased red blood cell production does occur, a 2001 study by Hahn et al. theorized that the net benefit of this gain varied between individuals and “averages little more than 1%.”

The Hahn paper was a review of literature that focused on moderate altitudes (1500 – 3000m/ 4950 – 9900 feet) and extended exposure of 2 – 4 weeks. Among the relevant findings of the review was that altitude training did not create enough of a stimulus to significantly increase red blood cell volume or haemoglobin mass. Haemoglobin is the part of the red cell responsible for transporting oxygen. They did note, however, that with acclimatization lactate clearance and/or production was altered to the benefit of the exercising athlete (e.g., lower production, higher clearance).

Another interesting study on the impact of altitude on performance comes from Gore et al. in 2007. They sought to identify which factors, other than EPO production and RBC volume, might account for differences in performance after altitude training. In the study they undertook a review of literature focused primarily on the Live High Train Low (LHTL) approach, where training occurs at low altitude and the athlete lives at high altitude via use of an oxygen tent or other mechanism.

Upon review they came to the conclusion that a genetic transcription factor known as Hypoxia Inducible Factor (HIF-1) is a sort of global regulator of oxygen homeostasis, and is present in tissue in the body, acting to transcript, among others, the EPO gene and to influence factors like improved exercise function via glycolytic enzymes, glucose transporters, and other non-hematological (blood-based) pathways.

In addition, they considered that increased ATP production per mole of oxygen (or decreased ATP utilization) might play a role as well. Management of muscle pH is another area where hypoxic training plays an important role. Specifically the transport of lactate and the removal of hydrogen ions from the blood are dramatically improved with hypoxic training.

They did note a couple of key negatives from altitude training. Specifically cardiac output was lower, sleep was impacted and immune function can be suppressed even at moderate altitudes (2650m/8750ft). In a different study, Clark et al. (2007) looked at peak oxygen consumption at four different elevations: 200m, 1200m, 2200m and 3200m, and found that in their 10 well-trained cyclists peak VO2 declined 8.2%, 13.9%, and 22.5% at each of the higher elevations. Correspondingly, five minute power on a time trial effort decreased 5.8%, 10.3% and 19.8% at the same altitudes compared to the baseline of 200m.

Here is where the research and the reality intersect.

On The Road
Cycling is an aerobic sport interspersed with high intensity non-aerobic efforts. Introduce the added element of altitude and performance is easily impacted in a number of ways. First, let’s think of the athlete who travels to Colorado on a shorter time window than the two to three weeks commonly recommended for acclimatization – he/she can be expected to have problems sleeping and may be more prone to illness and extended feelings of fatigue.

In addition, out on the road they will suffer impaired peak VO2 values and, perhaps most importantly in a stage race, may mis-pace efforts at all intensities, most especially at VO2max. Mis-judge an effort at 10,000 feet and you will not only suffer that day, but recovery and repeatability will also be impaired.

For those athletes who can spend adequate time at altitude they will reap some benefits, but there are also some potential downsides. Above 1500m (4500 feet) the partial pressure of oxygen is about 10-15% lower than at sea level. This means you simply cannot move enough oxygen to supply the working muscles. Peak power and VO2max will always be lower at altitude. If those athletes were competing at sea level they may well see improvements in lactate clearing, blood pH buffering, and sea level VO2max, but given that the race in Colorado is entirely above 5000 feet these benefits are much less well established. 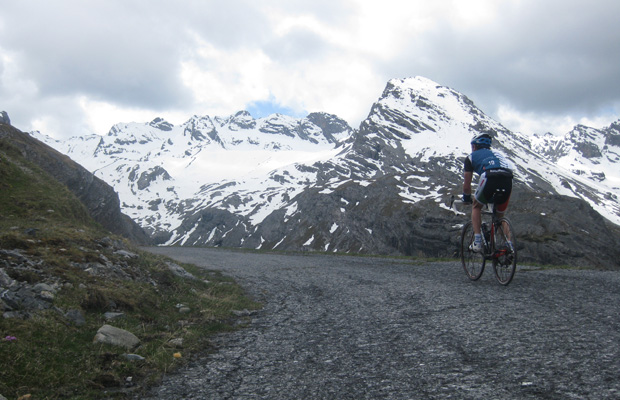 The PEZ himself pushing out the watts at altitude on the Stelvio last year.

The type of training/preparation the teams have undertaken with their early arrival is called Live High Train High (LHTH) and represents a necessary approach for the racers. There is speculation as to whether any performance gains to be seen by this approach are due to physiological improvements or simply the after effect of a focused block of training free of the daily distractions we all face. One notable study by Daniels and Oldridge in 1970 saw a 3 percent improvement in 3-mile race pace at the end of 2×14 day training blocks where normal sea level training loads were employed throughout the camp. It will certainly be interesting to watch the racers try to deal with the altitude and its effects!

Summary
This weeks USA Pro Cycling Challenge presents a unique experience for the athletes participating. With the entire parcours above 5000 feet the athletes will face the effects of decreased oxygen availability and lower peak power values across all durations. Research has shown that altitude training, or more specifically sea level training with altitude living – the so called Live High Train Low approach – has a substantial impact on physiological markers like blood lactate production/buffering, enzymatic and mitochondrial efficiency, and blood pH.

Whether these differences are to be reaped by those who have spent the last month or more training and racing at altitude remains to be seen, but those athletes who took no such approach will most certainly suffer from the decreased oxygen available and will likely mis-pace their efforts on both power production and ratings of perceived exertion. Should make for an interesting race!

About Matt McNamara: Matt is a USA Cycling Level 1 coach with over 20 years of racing, coaching and team management experience. He is the founder and president of Sterling Sports Group. If you have any questions or comments please feel free to contact him directly at [email protected]. You can learn more by visiting his website at www.sterlingwins.com.
Like PEZ? Why not subscribe to our weekly newsletter to receive updates and reminders on what's cool in road cycling?