If it works for the gang at Discovery Channel (the actual TV company, not the former cycling team), then it’s good enough for us here at PEZ. Since we’re on the off-season theme, Josh has decided to tackle some of his pet peeve off-season training myths and give his perspective. The truth or old-school bahooey? Read and decide for yourself.

I can already tell you that I’m going to get some flak on this one, perhaps even from my fellow Tool Box writers. But I have some strong feelings about winter training techniques, the misconceptions and hard to die old school attitudes, and it’s time to get it out on the table.

Bear in mind, that there is more than one way to skin a cat. These are training techniques that, through my research as well 19 years of racing and training experience, I believe to be flawed. Some coaches may have found effective ways to incorporate these techniques into their training program and that is just fine, but for me there is no better way to throw away your training time than by following these outdated methods. So enough with the disclaimers, let’s get to work. 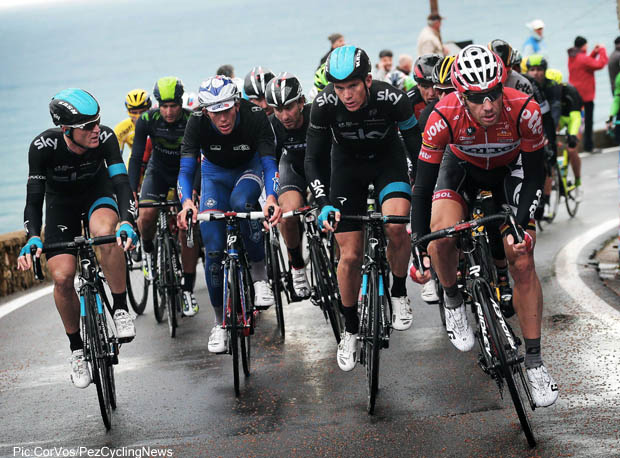 Myth #1: Riding a fixed gear improves pedaling efficiency and leg speed
I might as well get the big one out of the way first. Fixed gear bikes are a great toy for tooling around town, cruising the beach, or propping up for all to see outside the coffee shop, but they have no place in a serious road cyclist’s training routine, unless your primary goals are riding on the velodrome. Here’s why:

• When you practice high cadence training on your road bike you are forced to recruit the muscle fibers that are necessary for quick contractions in the pattern required to keep the pedals moving. However, on a fixie, the pedals are always spinning in perfect circles at very high speeds no matter how sloppy or inefficient your stroke is. Your muscles aren’t required to act, they are really only required to react.

• Riding a fixed gear is the exact opposite of riding PowerCranks, whose advantage has been proven repeatedly on this very site. PowerCranks require your muscle fibers to fire throughout the 360 degree pedal stroke. You are required to push across the top, push down in the front, pull across the bottom and pull up in the back. Your pedal stroke may slow temporarily, but the muscular foundation becomes so solid that it only takes a few weeks of high cadence on your road bike to turn the strength you built on the PowerCranks into power.

• Compared to a fixed gear, even on a regular road bike, your muscle fibers are forced to fire in a very efficient manner. At the very least, you’ll have the experience of pushing down and, to some extent, controlling the movement throughout the pedal circle. On a fixed gear, the bike is literally doing all the work for you. You’re really not teaching your legs anything but to get tossed around at ridiculous speeds. Think about a gym member who takes indoor cycling classes which utilize a large heavy fly wheel. They may get their legs whipped around in crazy circles at a cadence of up to 140 rpm, but have you ever seen them achieve this on a real bike? Trust me, it doesn’t translate.

As a final proof, I offer you up this example. Every year while racing, I finished my season on the track. In 2008 I wrapped things up with the Points Race at Elite Nationals. Even though I geared up to a 50 x 14, due to the increased competition (Garmin Chipotle, Health Net, Rock Racing), I still spun out at about 150 rpm on some of the sprint laps. When I jumped back on my road bike today, however, I felt like I was chopping broccoli. My legs became so accustomed to the forced circles of the track bike that they became lazy, losing the ability to do the work themselves.

Just like with anything in cycling, skills are extremely specific. If you plan on racing on a fixed gear then it makes sense to train on one. If you plan on racing on the road, train on your road bike or, even better, do you winter base on PowerCranks, teaching your muscles to fire in absolute perfection and coordination, and then switch to your ride bike just a few weeks before race season. Save the fixie for the high school kids riding in tight jeans.

Myth #2: Small Ring Only!
As recently as ten years ago, I knew coaches and riders who still adhered to this outdated winter training principle. I’m not sure how common it still is today. This is a really simple training concept – put it in the small chain ring on October 1st and don’t shift up until February 1st. Since I didn’t create this technique, and I don’t use it, I can’t tell you exactly what purpose it serves but I can take a guess and I can also tell you why it’s not such a great idea.

My guess is that it was a way for coaches to keep their riders from going too hard in the off season. The idea is that if the rider can’t go into the big ring, he won’t be tempted to hammer the group rides or participate in the club sprints. I also figure the theory is that an entire winter of high cadence riding will result in a perfect pedal stroke by the time race season comes along.

Here’s why I disagree with this principle. Leg speed can be easily developed at any point in the season. You could even do a heavy load of leg speed training immediately before a high priority race. The reason is that it doesn’t tax your muscular system, your heart or your lungs. In essence, it is really training your brain.

What you can’t do at any point in the season is train strength. Training muscular strength will temporarily slow you down, cause fatigue and require several days of recovery. Can you think of a time of the year where quick recovery and road performance is not at all important? At what point in the season can we afford to destroy our muscles without worrying about getting hammered into the ground at the local race? I think you see where I am going here.

So if you’re my client, it’s the small chain ring that gets tossed out the window during winter training, as you’ll be pedaling at 70-75 rpm (ideally on PowerCranks) for the whole winter. Your legs will feel like blocks of cement and you’ll be struggling on the Friday coffee ride. Then, before your first race, you’ll do two weeks of high cadence and when you’re standing on the podium, I can guarantee your teammates who saw you struggling two weeks earlier will be calling for a blood test.

Myth #3: Long Slow Distance
It won’t be long before I hear the Shofar blow over the cycling club e-group as the troops are rallied to meet for the Long Slow Distance rides up the coast. I have to muffle a scream every time I see 6 hr per week weekend warriors heading out for their 3 hr long slow weekend ride.

Even if you had 45 hrs per week to ride and you plan on doing 21-day stage races, I still wouldn’t recommend this style of training. But if you only have 12 hrs per week to train and you’re wasting half of it rolling down the avenue at 16 mph, you’re losing valuable training time. As I’ve always said, you have to get the most out of every second you’re on the bike. We have another word now for LSD or Long Slow Distance. It’s called JM: Junk Miles.

Originally it was thought that since high stress training breaks down blood capillaries and since capillary density means more blood to working muscles, it is advisable to avoid any high stress training in the winter so to nurture the growth of those capillaries.
However, there’s a new concept now in European endurance training. It’s called MP: Motor Pacing!

Sounds a little more intriguing than anything with the word SLOW in it, right? The concept behind MP is that it teaches your body speed and keeps you firing at an extreme endurance intensity, just below anaerobic threshold. Essentially, it is what some call zone 3 and they do it for up to six hours a day. If you have a loving spouse who doesn’t mind driving along at 28 mph, three hrs a day, causing massive traffic jams everywhere you go, then you’re all set.

For the rest of us, you can simulate this on your own. The challenge is the focus it takes to keep the pace just right. These rides are done just above endurance pace and just below anaerobic threshold. You must concentrate the entire time to make sure you don’t go above or below. I strongly recommend doing these rides on your own with a heart rate monitor or power meter as your guide.

Here in Los Angeles, we have this amazing phenomenon. When I leave my house at 9 am to head north on the PCH, there is a blessed tailwind. Then, right around noon when I grab a snack and head back, the wind magically turns around with me. The end result is six glorious hours in the saddle with an average speed of close to 25 mph. Not bad for a solo ride. You might not have anything quite like this where you live, but see if you can come up with a ride that incorporates these principles. One warning though. It is very easy to become overtrained if you spend too much time in Zone 3. Make sure you are recovered completely between workouts and keep track of your resting heart rate in the morning.

As the mercury plummets to 63 degrees here in Los Angeles, I wish you a happy start to your winter training.

Fixing Neck and Upper Back Tightness