Does being fitter also make you tougher? Does improved fitness actually alter pain tolerance? Cycle sport is intricately mythologized with the heroism and agony of suffering. We watch and marvel not just at the speed and power of the pros, but for the thrill (for us) and suffering (for them) inherent in racing over cobbles, high mountains rain, extreme heat, and even snow.

‘It still hurts just as much, you just go faster’ – Greg LeMond

My 2005 Rehab
Back in 2005, I did a bit of a break and enter at high speed through the back of a hatchback which zipped out of the driveway without looking. The road to rehab was long but straightforward, despite a shattered scapula (8+ cracks) and a few broken ribs. At the time, many friends remarked how quickly I recovered, and claimed that it must have been my fitness.

Thinking through the process, I felt it wasn’t anything to do with my physical state of fitness, but more that I was used to the distinction between pain as a dangerous signal versus discomfort from daily training. That is, I was willing to push myself in rehab right to the point of actual pain, as opposed to mistaking tiredness or discomfort as pain.

This past Sunday, my good pal Rob and I were riding out to the club ride meeting point. Rounding a graveled corner at walking pace, Rob slid out and slammed his right side, ending up with a femur fracture. Besides obviously wishing him well in his rehab, I came across a new paper directly investigating the relationship between aerobic fitness and pain perception. 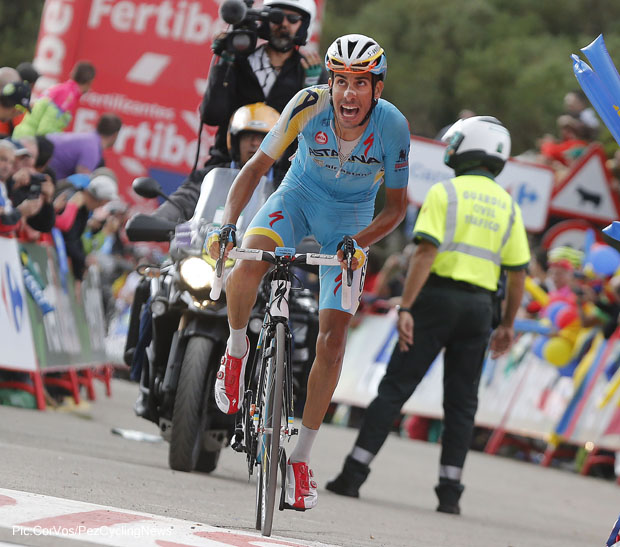 Jones et al. 2014
Surprisingly, very little research, if any, has directly explored the relationship between aerobic training and pain perception. What we generally know from scientific studies is that acute exercise provides a hypoalgesic effect. That is, the endorphins you produce during exercise also reduces your pain perception in the short term. Chronic exercise also decreases pain sensitivity in patient populations suffering from chronic pain. However, the presence of persistent pain as a confounding factor in these studies means that we cannot directly translate such findings to otherwise healthy populations.

A group from University of New South Wales in Australia decided to tackle this topic, and their results were published this summer in the prestigious journal Medicine and Science in Sports and Exercise. They chose to train moderately fit individuals over six weeks, and tested both their pain tolerance and also pain threshold (point at which pain is noticeable or significant). Some of the methodological details:

• 24 total participants with no history of chronic pain or disease nor of depression.

• Exercise group performed 18 training sessions over 6 weeks, each consisting of 30 min cycling at 75% of heart rate reserve. Starting peak aerobic capacity was 36.3 mL/kg/min, so definitely on the “normal” to moderate fit range.

• Control group performed no systematic training during the 6 weeks, and were instructed not to alter their normal physical activity patterns. Starting peak aerobic capacity was 42.9 mL/kg/min, again within the normal to moderate range.

• Pain threshold was tested at 4 muscles sites: trapezius, biceps, rectus femoris (one of the quadriceps muscles), and tibialis anterior (one of the shin muscles). A blunt force-measuring probe was systematically applied at these sites, and the participants responded when the pressure turned into pain.

• Pain tolerance was measured by ischemia, the blockage of blood to a limb as might happen with a tourniquet. Basically, participants had a blood pressure cuff placed around their arm at 200 mmHg pressure, and had to perform periodic gripping exercise to the point of tolerance.

The Painful Truth
A straightforward and solid experimental design overall. It was critical that they had a control group for this study, as the whole point is to compare training versus no training. The caveat is that you’re comparing two groups of individuals, so there’s some potential variability inherent between the two groups.

• Exercise group had a significant ~15% increase in aerobic fitness (36.3 to 41.6 mL/kg/min pre and post), supported by higher peak workloads in both the post-test and during the final exercise training session.

• No significant effect was observed in the pressure pain threshold in either group, in any of the four muscles tested, after the exercise or control period.

Analysis
As noted above, the overall experimental question was interesting and the design was sound. This study was nice in being the first to clearly demonstrate that chronic exercise attenuates pain perception and tolerance in otherwise healthy individuals. In turn, this definitely supports the general idea that fitness is not just a physical state, but also a psychological state in that it improves pain tolerance.

Interestingly, the similarity in both groups for pain threshold response suggests that fitter individuals still recognize a noxious stimuli as painful, but that they are better able to tune it out and put up with it. This also supports the underlying theme that training isn’t just about improving your physical state, but also your psychological tolerance to discomfort or pain.

Summary
This study further adds to the whole renewed emphasis on the athlete as a holistic mind-body system. For example, the data suggests that psychological interventions focused on reducing or managing discomfort and pain can greatly benefit athletes in training and competition.

So with the off-season upon us in the northern hemisphere, consider devoting time to improving not only your physical but your mental toughness. And as you plan for 2015, consider workouts that challenge you to push your mental limits too.

As for Rob, get well soon – you’ve got the fitness to do it!