This is the time of year when we should be reveling in the spring classics. Nothing beats these races for pure spectacle, with its ‘there’s no tomorrow’ ethos of all-out racing. One of the best examples of great racing tactics and sport psych was Luca Paolini’s masterclass at Gent-Wevelgem in 2015.

I wrote this article right after watching the race live while riding my trainer with my buddy Rob back in 2015. Since there’s no real racing to watch now, this is a good opportunity to rewatch this classic and see what we can learn for our own racing.

Your legs may be made of steel, but if your brain is made of oatmeal, you’re not going to get very far in a sport as tough as cycling. Looking back to 2002, the difference in my breakthrough first-ever win in a race (we’ll try to avoid mentioning that it was also my only-ever win…) was not just having great legs, but the incredible mental focus I had throughout every single metre of the entire race.

Watching Luca Paolini’s jaw-droppingly brilliant ride at Gent-Wevelgem this weekend, I was again reminded of just how important the mental side of cycling is. This applies not just to classic sport psychology, but also the nuanced little decisions and tricks that can make or break your race. So let’s reflect on some of the things that Luca did in his romping victory, and what we can learn for our own riding and racing. 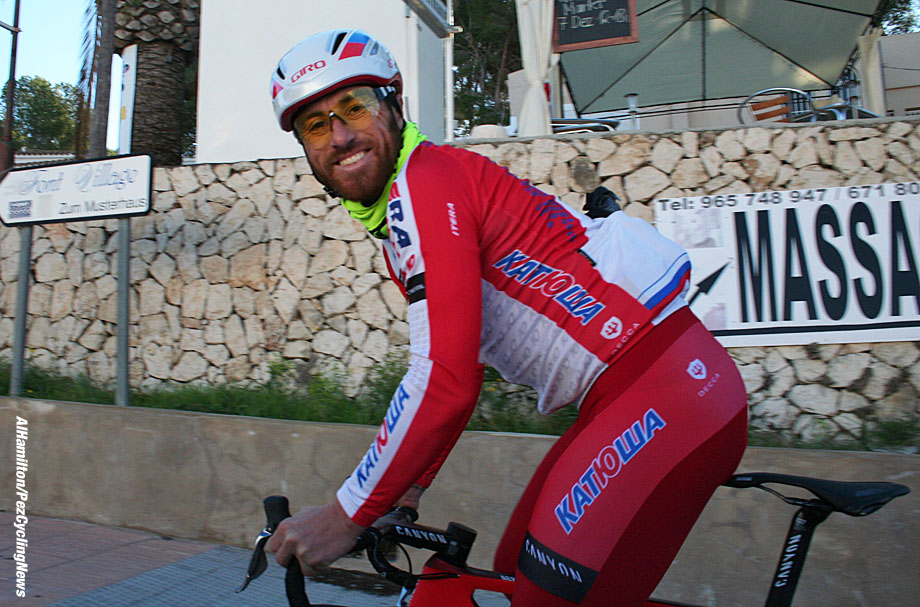 Change of Plans
In all the pre-race hype, the Katusha game plan was clear – work for a small or big group sprint for Alexander Kristoff. Paolini already showed that he could do that to near-perfection at Milan-San Remo the week before. And Kristoff has certainly showed he had the form with a second place at MSR and victories throughout the year. Even the grim weather was perfect – the type that Kristoff revels in.

So the game plan was set, but with 50-60 km to go, Jurgen Roelandt’s (Lotto Soudal) and the 5-rider chase group way up the road, along with the lack of cooperation in the main peloton, meant that the chances for a regroupement and pack sprint were fading. That’s when Paolini went to Plan B. He soloed off the front of the peloton about a minute back of the 5 chasers. At first it looked like he was trying to motivate the peloton into chasing, but when that didn’t occur he just put his head down and fought his way to close that minute gap solo.

Lesson 1: No matter how hard-wired your tactics or your training plan, you have to be flexible and willing to change things on the fly.

Never Give Up
Approaching the Kemmelberg, the final climb with about 35 km to go, the 7 chasers (Paolini, Niki Terpstra, Stijn Vanderbergh, Sep Vanmarcke, Daniel Oss, Geraint Thomas, Jens Debusschere) were 2 min back of Roelandts. The chase just drilled it up the Kemmelberg, and Oss was dropped about 15 s back at the summit, with Paolini evern further back.

At this point, I thought that was it for Luca, as the others didn’t seem to be waiting. He went through the winding path of a descent grinding a huge gear, caught up to Oss, took a look at him to see he was running on empty, then jumped straight past and kept on flogging himself until he caught back up to the chasers.

Lesson 2: Never, ever give up. Believe you can do it and focus on your plan. Self-belief is so critical in such a tough sport as cycling. 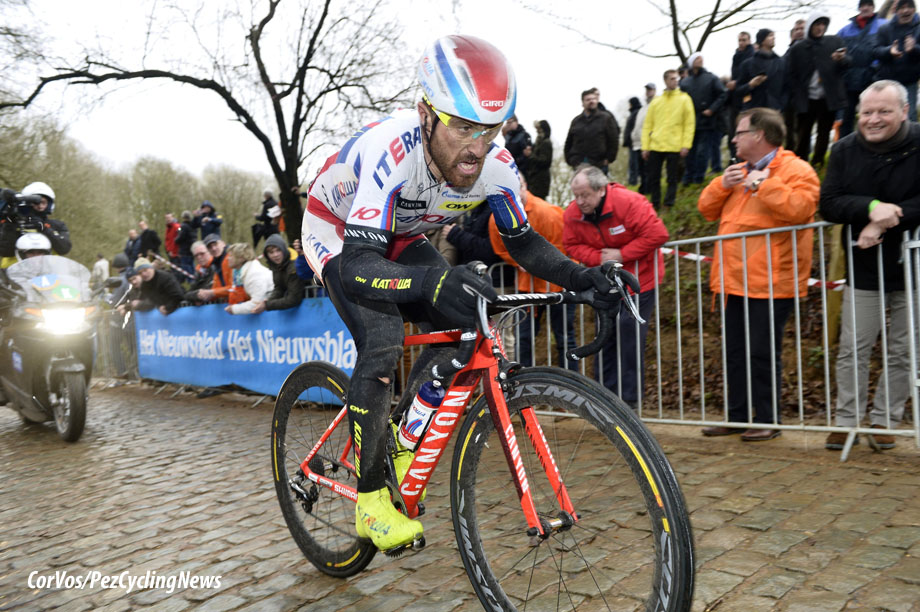 Lesson 3: Ignore distractions and have positive self-talk. You can bet Paolini was dialed in mentally and thinking only positive thoughts rather than thinking about the pain in his legs or the awful conditions.

Lesson 4: Size up your opposition. That little look Paolini gave Oss told him everything he needed to know – namely take his chances with a solo chase rather than waiting and working with Oss. Like in poker, everyone has a “tell” or trademark body language, especially when they’re knackered. Work on reducing yours.

Cat and Mouse
After Roelandt was finally reeled in with 17 km to go (after a truly epic 60 km solo break), the tactical games really began in earnest. The seven started probing each other with attacks both small and big. Then Terpstra flatted. At that point Paolini was rolling gently solo off the front. But then he looked back and saw that the others were slowing down. Paolini had two choices at that point: 1) go and aim for a 15 km solo, or 2) wait with everyone else for Terpstra.

My guess is that Paolini took a quick mental inventory of his physical state at that point and realized that 15 km is way too far out for a solo stab. Along with that, he probably mentally counted two Lotto-Soudals and two Etixx-Quick Steps, and figured that the entire group was still too big and strong this far from the line. So he kept his powder dry too and returned to the group.

Lesson 5. Hero moves are stupid. Don’t waste your precious energy on showboating moves. Know exactly your abilities and figure out how best to use them.

Pay Attention
Right after Terpstra rejoined the chasers, he did the stereotypical immediate attack. Paolini had his radar on full alert and immediately jumped into Terpstra’s slipstream. And I mean immediately, such that he barely had to waste a single watt. End result was that he and Terpstra immediately built a 10-15 s gap, with Terpstra doing all the work to build that gap. That led to a thrilling three-way two-man TTT (Terpstra-Paolini, Vanderbergh-Thomas, Vanmarcke-Debusschere) for about 2-3 km, with Roelandt dropped for good.

In contrast, look at Debusschere. He didn’t anticipate Terpstra’s attack, and he also was sat on the wrong/weak wheel of Vanmarcke. Even assuming he was strong enough, that led to a furious and draining chase to get back up to the attackers, and surely cost them energy for the real finale.

Lesson 6: Always pay attention! Even in a 6 h race, the results can be decided in a split second of inattention.

Lesson 7: Race on instinct. Sometimes over-thinking can be your worst enemy, and delaying reacting will cost you big-time. 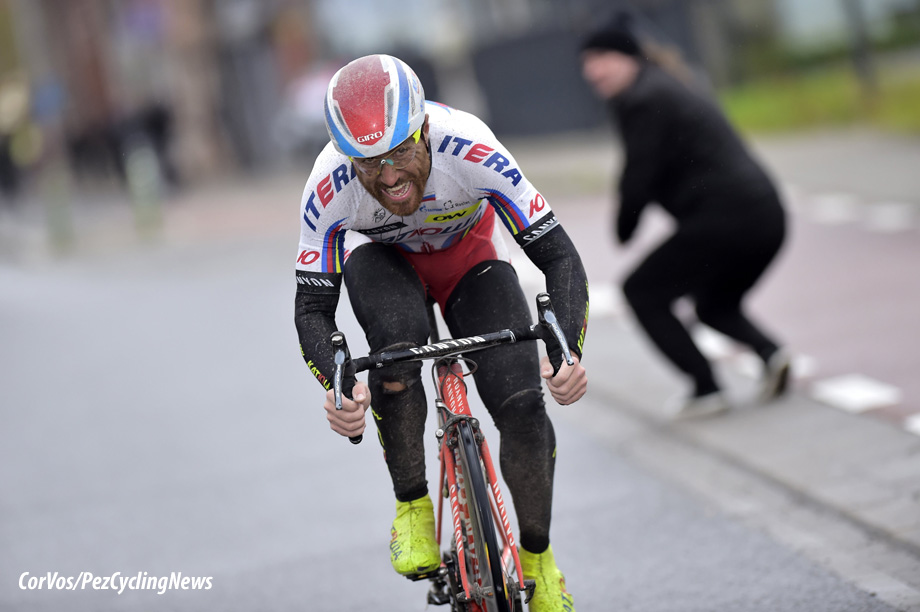 The Attack
With 6 km to go, Paolini made his move. It was a truly brilliant two-part, rope-a-dope attack. Take a look at the footage from the helicopter. First, he massively telegraphed and dramatized his attack, standing up and really throwing his bike side to side to make it seem like an all-out attack. He gained a bit of space, then let Thomas come back up towards him and left everyone thinking that that was all he had in the tank.

Then just as Thomas almost closed the gap and probably subconsciously relaxed thinking that the threat had been neutralized, Paolini put in his REAL and fully-seated attack. This not only achieved the desired effect of opening a gap, it was a massive psychological sucker punch to the chasers.

Then that was it and Paolini never looked back again until just before the line, pointing to his heart and his head. A true master class in both!

Lesson 8: Expect the unexpected. Or in the case of those chasing Paolini, sometimes the expected is actually not what you expect! 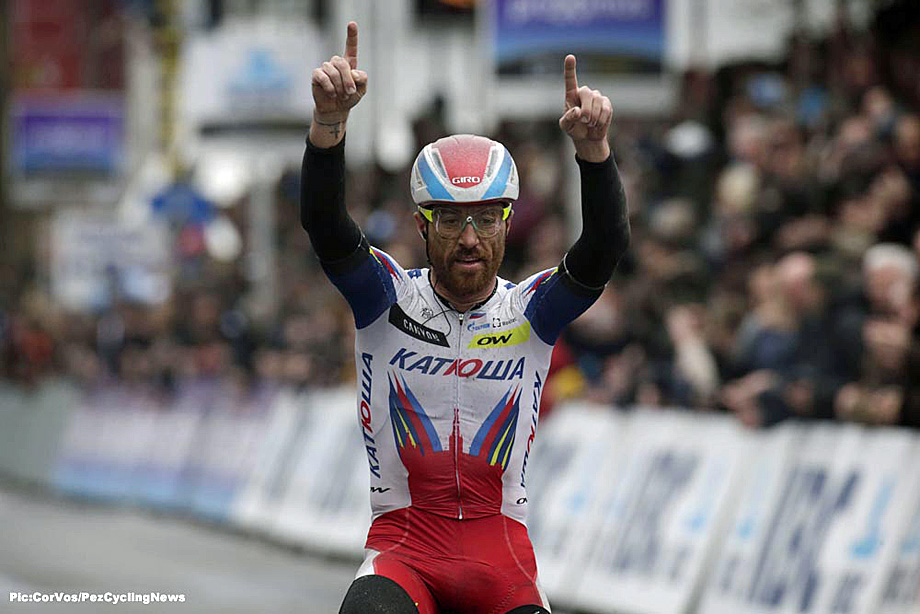 Summary
Cycling has often been called chess on two wheels, and all done while your heart rate is at max. Luca Paolini reminded us that strong legs are not the only deciding factor in a race, and that it has to be matched with smarts and an iron will.

In your own cycling, whether it be racing or otherwise, train not just your body but also your mind, as it’s that combination that will unlock your own personal peak performance. 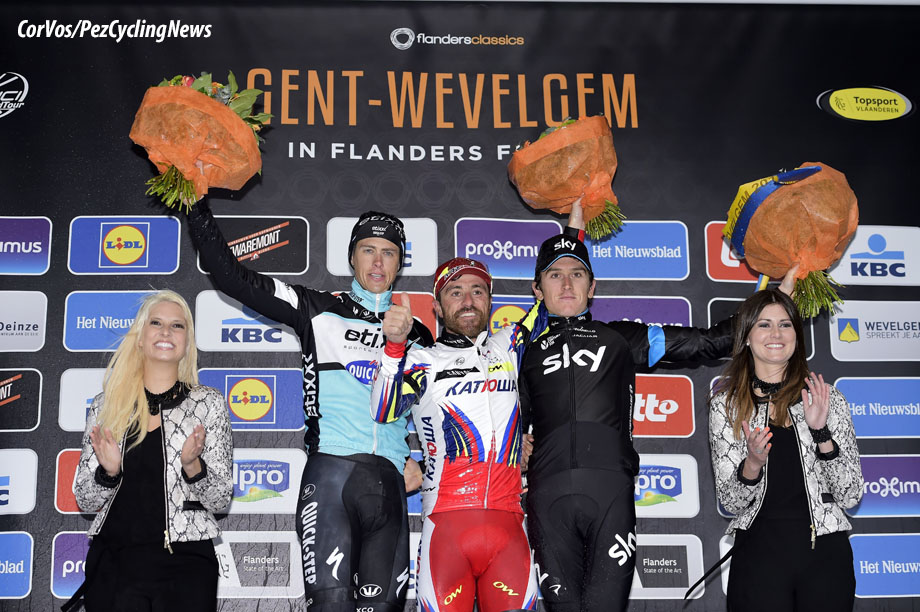