In the build up to the Tour of California, I had the good fortune to join the Trek-Segafredo team for a warm-up ride before the race began. It was a great lesson in reinforcing solid riding habits, whether solo or in a group.

Thanks to Justin Henkel and the group at www.cycleops.com, I got to spend a couple of glorious days of riding in San Diego. The reason for the trip was to attend the launch of their brand-new smart indoor trainer called “The Hammer.” In addition to attending the launch, Trek-Segafredo invited Justin and myself to join six of the team members as they spun out their legs after flying in from Europe the day before.

Of course, very few people in their right minds would pass up such an opportunity. That really is one of the beauties of the sport of cycling, the fact that not only can you ride the same roads as the big boys, you have such ready access to the very best in the sport. So we ended up joining Markel Irizar, Jasper Stuyvens, Julián Arredondo, Niccolò Bonafazio, Haimar Zubeldia, and Julian Bernard for a ride through some canyon roads around San Diego. 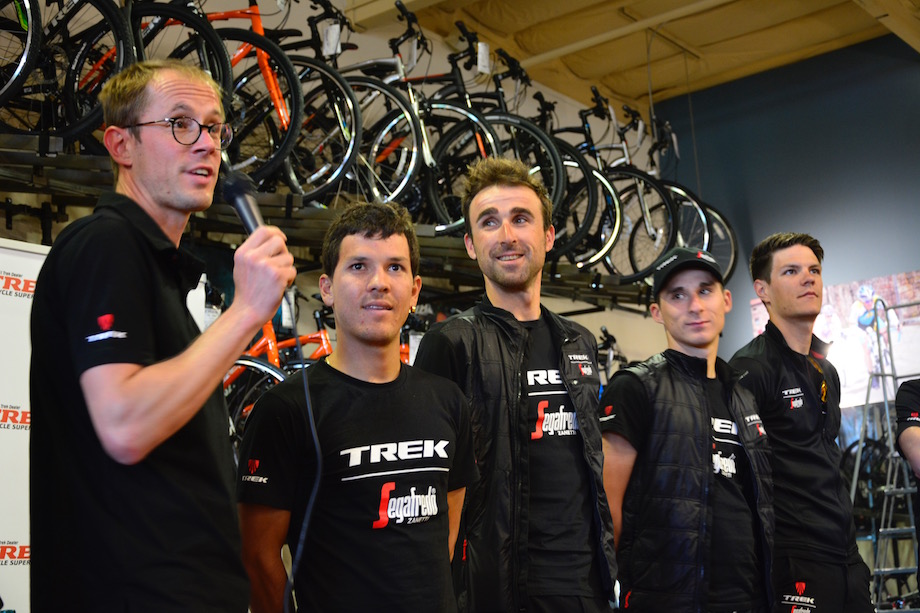 PR man Tim Vanderjeugd interviewing Julián Arredondo and the rest of the Trek-Segafredo team at a fan event before the ToC.

Be on Time!
Rule number one for riding with professionals – or anybody but yourself really – is to be on time! If a ride leaves at 10 o’clock in the morning, then make sure you get there well ahead of time, with enough time that you can get changed and make sure your bike is working. The team was going to ride at 10 o’clock whether we were there and ready or not. Being late just wastes valuable and very precious cycling time for your mates.

Unfortunately for me, even with extra time on my hands, I forgot to put on sunscreen because it seemed a little bit cloudy. As a result, I got my first good sunburn in a few years. 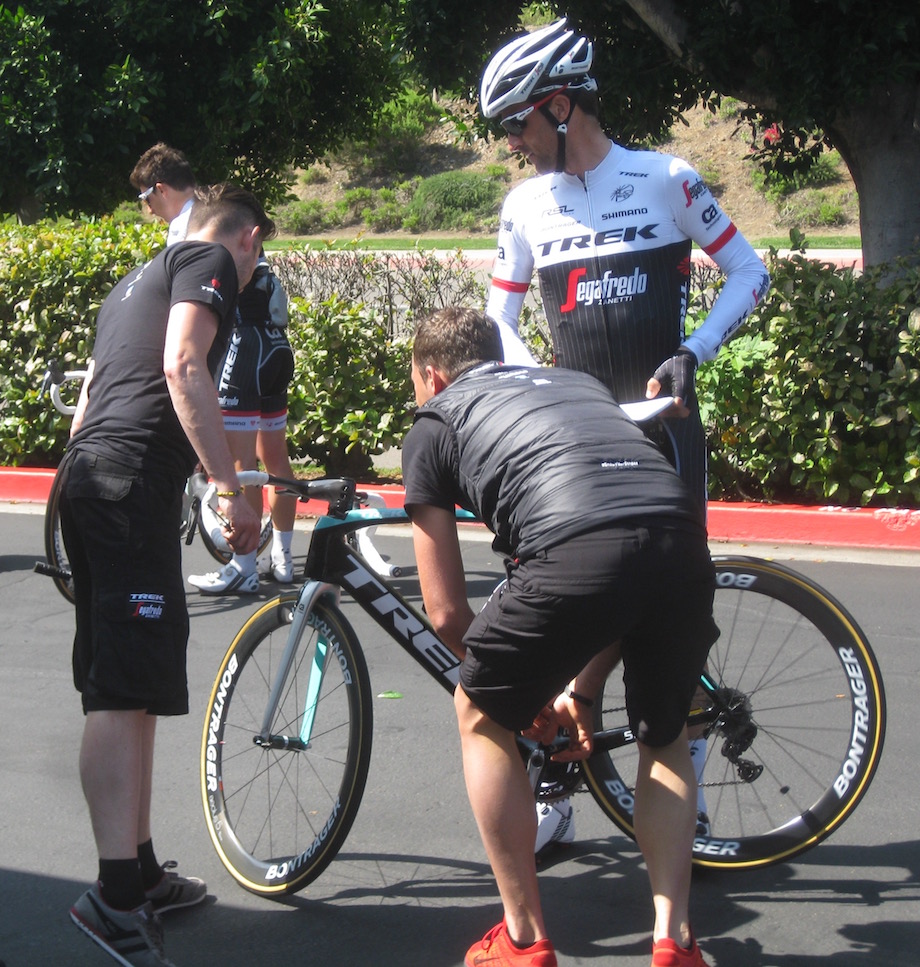 Nobody likes wasting their time watching you get your bike ready when they could be riding.

The Pros are Fast
It really isn’t a surprise, but the pros are fast. We were on an easy ride the day after their transatlantic flight over nine times zones, but I was doing pretty much what is race pace for me just to hang onto them over the canyon roads. Just for reference, my functional threshold power is 260 watts and my normalized power for the ride ended up being 233 W. We all know that the pros can drop the hammer, but what really struck me was how fast they were even on an easy ride.

The pros also really like speed. Besides getting up to speed quickly, they love getting into an aerodynamic tuck by sitting on the top tube on any slight descent that they can find. That is probably one thing we should not be emulating, no matter how cool it looks.

Get Into Formation
What is remarkable about being with elite riders is how smoothly they ride in close proximity to each other. There really is no wasted motion or energy to the way that they ride. There is none of the gaggle of headless chickens riding that you often see in inexperienced cyclists or even fairly strong and experienced cyclists.

The pros are not spread over the road, but stick tightly to a two by two formation. And after every stoplight or turn, they are back into formation and rolling back up at speed pretty much by the time you have managed to clip into your pedals. 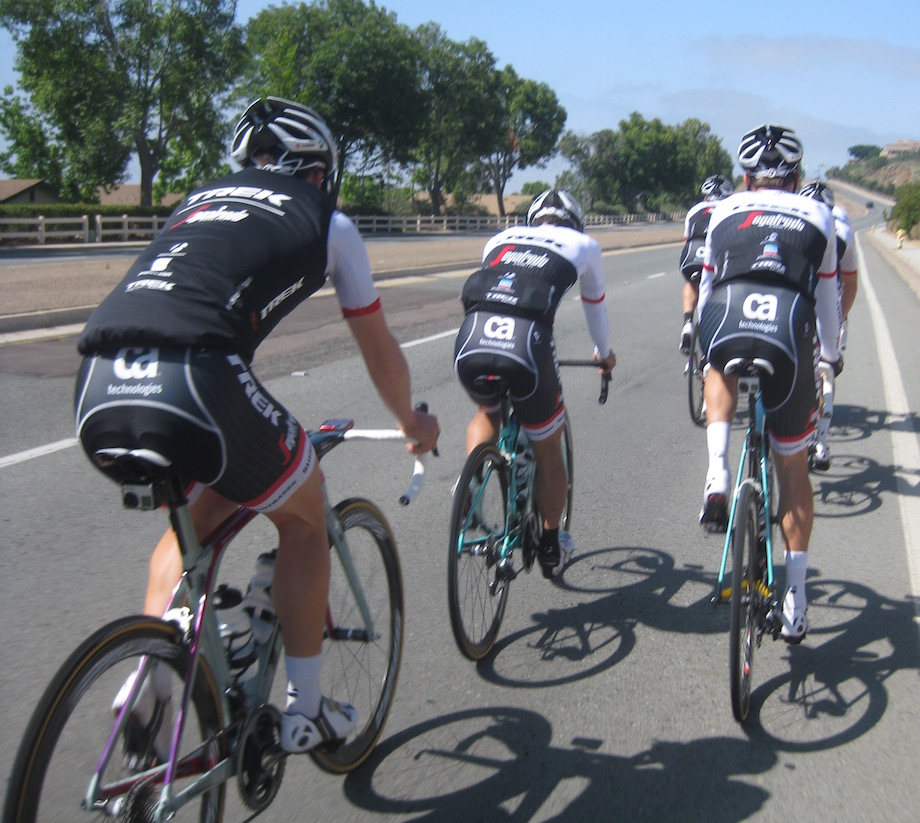 Nice and tight, with no wasted energy.

BTW, it should be obvious, but your role on a ride with the pros is to just stay back and ride along. They are there to do a job and do not need to have you getting in their way unless you are specifically invited to do so. Considering how hard I was working just to stay in shotgun position at the back, this was more than fine with me.

Being a Good Citizen
Good teammates and friends look out for each other. The boys took care to point out obstacles both big and small, even though it was a small pack with only six of them and two of us. The lesson here is, don’t be that guy or girl who thinks everybody behind them should be able to figure out the road or the course for themselves. 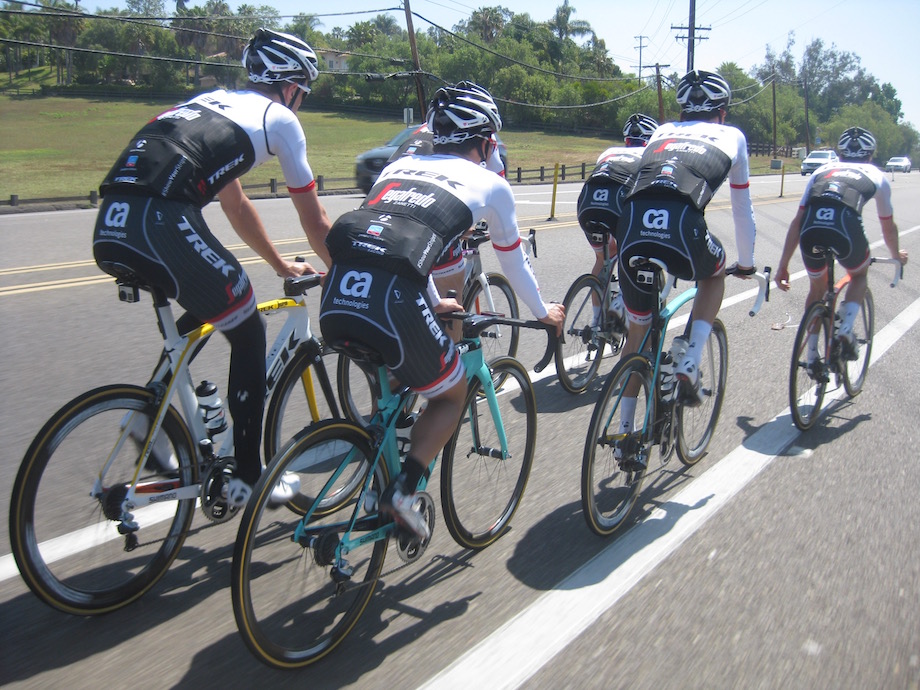 Bonafazio (far right) is not too cool to point out road hazards for his mates.

Bundle Up
When in doubt, over dressing beats under dressing. While I had the idiotic combination of dressing for heat yet forgetting to apply sunscreen, most of the team had long sleeves or even leg warmers on (in the case of Jasper Stuyvens) or a vest in the case of Niccolò Bonafazio. This was even though the temperature was north of 20°C and I was wearing only a jersey with no base layer and bib shorts. 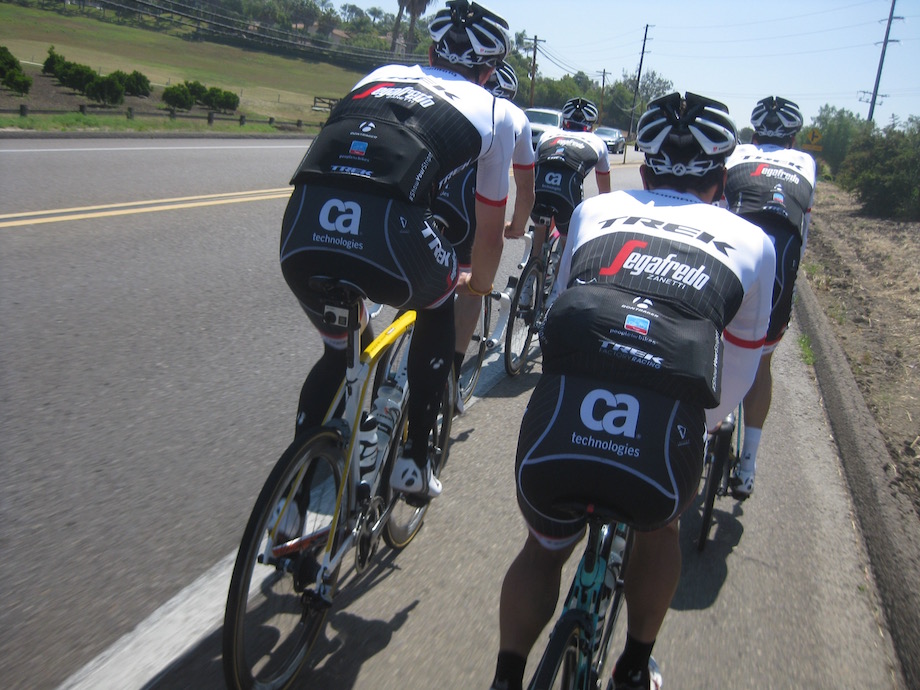 Another thing with the pros is that they sure can spin a good cadence. There was no plodding along and grinding out big gears and low cadences. I spent a good portion of the day tailing Jasper Stuyvens, Kuurne-Brussels-Kuurne winner with a fabulous solo attack – and he was regularly maintaining a cadence of 105 rpm throughout the ride.

So while the pros may have mechanics to take care of their bikes and soigneurs to take care of most everything else, their job depends on their bodies, and so they prioritize taking care of it.

Summary
There really isn’t any reason we all cannot ride in the same manner as the pros, albeit at a slightly reduced pace. Again, the main thing I got out of the ride, besides a hard workout, was a reminder that we can always work on being smoother on our bikes. This applies to us individually in terms of our bike handling and our economy on the bike, but also how to ride better in a group. And the burn lines on my arms and legs are like tattoos that remind me to take better care of my body.

Training with Trek-Segafredo, look out for Stephen at around 30 seconds in

Technological Fraud to be Controlled on 2016 Tour