While it may be bad enough that we ride without a plan, it is infinitely worse when we train smart and with dedication, then proceed to race without a clear plan or aim. But look at most amateur races and that’s exactly what happens, wasting a lot of effort and all that fitness you’ve built up. First up in racing smart is to constantly question why…

Josh the DS
Taking my first season away from racing in nine years has opened up some unexpected opportunities. I’ve had more time to pursue my ongoing studies of sports psychology and sports physiology while also expanding my coaching business. Simultaneously I’ve had the opportunity to give my body a much needed and well deserved rest. 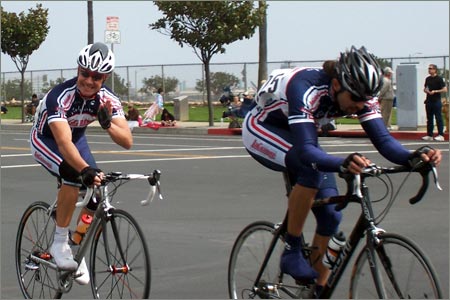 A Kahala/LaGrange rider breathes easily and waves to his wife while his
teammate suffers in the wind.

Perhaps most importantly, I’ve enjoyed the first Sunday morning of my married (and dating life, for that matter) at the farmers market with my wife. However, last weekend, I realized I had been overlooking one other important opportunity. I had been so busy traveling and racing and coaching that I hadn’t taken the time to leave my bike at home, head out to the local crit and watch my clients race.

I work with a local 4/5 team and we made plans to meet up at a local race. As I met with the guys for a pre-race strategy talk, I immediately felt myself slipping comfortably into the role of Director Sportif. Hey this isn’t too bad. All the fun and glory without the pain and suffering! As I began to lay out some race strategy, the question became, how to explain in words, the strategy, and techniques that have become so ingrained in me that they have become subconcious instincts.

In order to translate some of these instincts into words, I told them about a strategy I developed for myself during my early years of racing to make sure I stayed on track during difficult races.

Analyze This!
This technique is one which I developed soon after I became a Cat 2. I was at the Milk Ras in Ireland, feeling strong and pushing a hard pace at the front (of the groupetto). Man, I feel great! I could do this all day! Then I turned around and saw the entire “laughing” group comfortably sitting on my wheel discussing the massages they were going to get when they got to the hotel. My inner dialogue reared its head: Why are you in the wind? What are you doing? Is there a reason you’re doing all the work or are you just up here showboating?

That singular conversation turned out to be the makings of what is now a longstanding habit in which I indulge during every race. Throughout the course of a race, I question every move I make, every option I have and every plan I formulate. I do this so that I am always aware of what I am doing and why I am doing it. Are you chasing someone down? No. Are you setting tempo for a teammate? No. Are you trying to impress a girl on the sidelines (a perfectly legitimate reason by the way)? No? Then get the heck out of the wind!

Analyze That!
So, on race day, my advice to the team is simple. At any point during the race, ask yourself, Is there a good reason for me to be doing what I am doing or riding where I’m riding? If they can’t find a damn good reason to justify sitting in the wind or dangling on the back or re-wrapping their handle bar tape, then they better make a quick adjustment. Racing is all about conserving energy so if you can’t find an excellent reason for doing anything but burying yourself in the pack and making yourself disappear from the wind, then you better not do it. One of the best compliments I could pay a racer is, I could barely see you the whole time and then you were suddenly up in the break. It means that they were somewhere in the middle, protected from the wind, never doing an ounce more work than they had to until it was time for the decisive move.

For many of the racers, this was their first or second race. I wanted to create awareness within these guys so that they would at least understand every move they made and never do anything, just because. I’ve noticed that Cat 4 and Cat 5 racers have a tendency to try to copy what the see the big teams doing on TV. They see teams like Discovery or Phonak spending hours at a time leading the pack, and try to emulate that themselves. The big difference is that the only time a pro team will be at the front controlling a race is if at least one of a number of criteria are met: First they have a teammate high up in the G.C. Second, they have a teammate up in the break. Third, they want to deliver their climber to the base of the climb at the front of the group. Fourth, they’ve made a financial arrangement with another team to work. And lastly, they have a ridiculously fast sprinter with a strong lead out squad who they know will take the sprint. None of those requirements are usually met in a local four corner cat 5 industrial park crit.

Race tactics can be taught to a certain extent but tactical expertise can only truly be obtained by learning from one’s own mistakes. For instance, within minutes after giving this brilliant Knute Rockney speech, the team was sitting on the front of the pack, giving the entire field a free ride into a howling ocean wind. Of course they would have learned better the errors of their ways if they hadn’t ended up winning the race, but you see my point.

In the next article, I will go over specifics of race strategy such as breaking away, sprinting, climbing and chasing. Some of it can be learned by reading and listening to advice from experienced riders, but the rest of it needs to be learned through experience. For now, whether you race or just go out to have fun, start asking yourself simple questions. Start with this one. Am I getting the most out of every ride I do?

Josh Horowitz is a USCF Certified coach and an active Category 1 racer. For more information about his coaching services and any coaching questions you may have, check out his website at LiquidFitness.com