Last month’s article featured tips on what NOT to do in a race. I wrote about creating awareness within yourself at all times so that you never make a move without a clear purpose or do a lick of work that isn’t going to take you towards your ultimate goal. This month we’ll have a little more fun and talk about what you CAN do to stir things up while always keeping the team’s goal as your number one priority.

Now that you have established this awareness, let’s figure out what to do with it. In bicycle racing there are an infinite number of strategies and approaches to reach the same desired outcome. Some strategies might work well on a course one year, but not the next because there happens to be a slight cross wind. Some strategies work when it’s dry but not when it’s raining. What works great on a flat course with lots of turns could fail miserably on a similar course with less turns. Since there isn’t enough space here to even make a dent in all of those infinite eventualities, we’ll just deal with a few of the basics.

Breaking Away
Above all, don’t just sit in a race as cannon fodder and then spend the post-race bull session rationalizing why you didn’t do a thing! It’s all right and perfect strategy to keep your powder dry for that decisive move, but that’s different from taking the race passively and just hoping something will happen.

Quick, who doesn’t love Jens Voigt? We love him because he’s not afraid to take the bull by the horns with his super-aggressive racing style. Similarly, there’s nothing more fun than showing up to a race with five or six teammates and just putting the hurt on all day long. By simply riding aggressively you force the other teams into a defensive position, which not only limits their choice of tactics, but plays an important role in the mental balance of the competition. 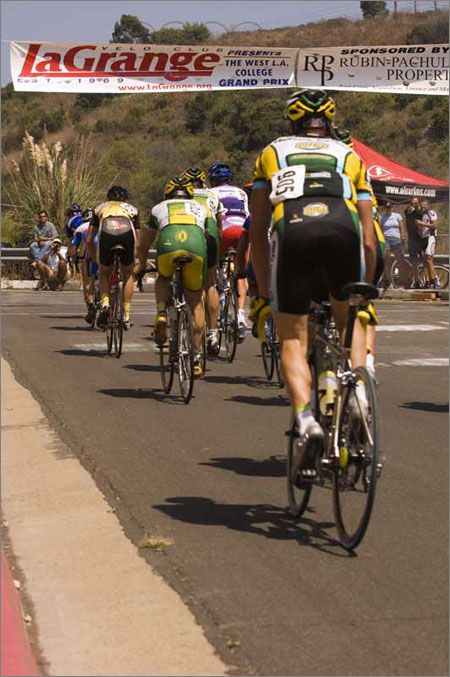 The break crests the infamous Stocker Street climb at the West LA College GP. With the strongest riders from all the major teams represented, it is sure to succeed, so your team is either sitting pretty too or else flaying itself at the front of the chasing pack!

However, many times I’ve seen a team get TOO carried away having fun with their attacks. Suddenly, their opponent pulls a judo type move, using your aggressive riding against you. To improve your chances of success you’ll want to break your squad of five to six racers into three key roles: the Pawn, the Bishop, and the Queen. Today, we’ll focus on The Pawn.

Life of a Pawn
Of a team of six, you must have three riders at the front at all times as pawns. They take turns attacking and following the obligatory counter attacks. This must be carefully coordinated so that The Pawn who just chased an attack can recover while the other two Pawns are on top of any moves that might go in the interim. The most important thing to keep in mind is that the tired Pawns should never drop more than 2 or 3 riders back in the peloton after an effort because s/he will shortly be needed back at the front.

You can practice this in training by doing one minute max effort intervals off the front of a group ride. When they catch you, even though you are spent, don’t let yourself fall more than two or three riders back in the group while you recover.

When you are trying to break away, never attack from the very front. If you do, you’ll be accelerating directly into a headwind and everyone will see you shift gears, stand up and then jump. What you want to do is accelerate up the side so that by the time you are seen by the riders in the front, you’re already going four to five mph faster than them. Then, if they want to follow, they will have to bridge the gap you’ve opened up.

The first attack rarely works. After each attack gets caught, the next rider (of the three) needs to be ready to either launch another attack or follow the counter attack. The worst mistake you can make is to launch a dozen great attacks and then miss the one that turns out to be the winning breakaway. Therefore, even if you are tired, you must remain vigilant in case one of your fellow Pawns misses an important move. For instance, if you’ve just followed three attacks in a row and the rider directly in front of you suddenly stands up and throws it into gear, don’t look around for your teammates wondering if someone is going to follow this guy. You’re in position. He’s your man.

So Now What?
So let’s say on a given day, you’re one of the three Pawns and you do get into a break. The decision making process is far from over.

If you get into a break with a weaker rider, you don’t necessarily want to do too much work. What’s the point of wasting precious energy on a doomed attempt? The only reason to stick with a break like this is to give your teammates a chance to sit up and rest. As long as they’ve got a rider up the road, the most they will have to do is to ride in the slip stream of a chase.

However, this does not mean the rest of the team should sit up and admire their shiny shaved legs. You still need to have several guys at the front to follow riders attempting to bridge across. Every time someone jumps you should have someone right on their wheel.

When an opponent attacks, attempting to bridge across to the break, several things may happen. First, if the attacking rider sees you sucking their wheel, they will often just give up the chase, knowing that they will have to do all the work themselves (because you have a teammate in the break). They know you won’t help them bridge so why should they give you a free ride? However, if you are lucky, they will continue their pursuit and you can rest in his draft all the way up to the break where you can then help you teammate.

Speaking of free rides, sometimes this next point seems too obvious to even mention, but time and again, I see newer riders doing it. You should almost never take a pull when you are bridging up to a teammate, or while you are in the pack with a teammate up the road. You have the advantage in those situations. Why would you help an opponent or the pack, catch your own teammate? All you have to do is suck wheels and let yourself get pulled up to the break.

However, there are exceptions to every rule. Your teammate is in the break with a much stronger rider and you are concerned that he might get dropped. In those cases, when you follow an attempt to bridge, let the chaser open the gap on their own and once you feel that you are comfortably out of the grasps of the bunch, you may decide to help the chase. Of course you would never do this if a potential race winner is in the chase group with you. In that case, you might be better off leaving it up to your weaker teammate to get the job done. All of this should be discussed well before the start of the race so there are no bad feelings afterwards.

Never work yourself out of a break. I’ve often seen a sense of pride or excitement overcome a rider. Lost in the moment, he takes just one too many pulls, blows up and goes back to the pack. Trust me, when your teammates think they’ve got the race locked up and suddenly in the distance, they see a familiar jersey floating back towards them, they will not be happy. If you’re tired and you have to sit in for a couple turns, do it. Getting yelled at by your breakaway partners is not nearly as bad as letting down the team. Of course, the ideal situation is to get your strongest guy into a break with their strongest guy so this never even becomes a concern.

I’ve covered a lot of ground here and probably given you just enough rope to hang yourself. Nevertheless, we’re not even close to finished with just this tiny snippet of race strategy that these articles are attempting to illuminate. Next month, The Bishop and the Queen.

Josh Horowitz is a USCF Certified coach and an active Category 1 racer. For more information about his coaching services and any coaching questions you may have, check out his website at LiquidFitness.com