Toolbox: Rebounding from a DNF

This year’s Tour de France will record a DNF next to major players such as Cavendish, Froome, and Contador. While injuries and crashes are a part of the sport, facing the choice to ‘abandon’ mid race or mid stage can be demoralizing. Without proper support this decision can haunt an athlete, undermining self-confidence and ultimately hurt performance.

Sports are full of acronyms such as RBI, TD, DQ, PR and DNF. Among endurance athletes perhaps none is more dreaded than ‘DNF’: did not finish. Results, like a mechanically related DNF, while disappointing are manageable because the cause is typically beyond the individual’s control. However, acknowledging, accepting and coping with a DNF due to the perceived or actual physical failure or frailty of the body, is often viewed a personal weakness and even a failure. For many, just the fear of not being able to finish creates excess stress and anxiety that can sets athletes up to underperform and decrease the enjoyment of the event.

DNF: Sign of Weakness or Strength?
Watching Chris Froome climb into the team car mid-stage 5 after several attempts to keep going, racers everywhere empathized with the internal struggle, level of physical pain, and the emotional impact of the decision. Recognizing the wisdom and strength it takes for others to make such a difficult choice is often much easier than extending the same benefit to oneself.

The level of internal pressures when faced with a DNF can be enormous, particularly when personal expectations are high. The more important the race, the higher the perceived stakes. ‘A’ races get labeled ‘A’ for a reason. They matter. They are the center of the hard work, effort and focus of weeks, months and possibly years of training. Making a continuation decision that you trust and can live with can be a daunting challenge.

Adding to the weight of the situation is the cultural norm that the ability to suffer is a sign of athletic excellence. Sport and training are built on a foundation of challenging physical limits and pushing through pain. ‘Icons’ are made of those who compete despite serious injuries. Kerri Strug’s 1996 Olympic vault on a broken ankle is number 51 on ESPN’s most memorable sports moments. Tyler Hamilton is noted for finishing the 2002 Giro d’Italia with a fractured shoulder and the 2003 Tour de France despite cracking his collarbone in an early stage. Announcers and sports writers sing songs and write odes to these demonstrations leaving some athletes to question themselves when they are sidelined by pain.

The choice to continue racing through pain, while admirable, is not without consequence. Short term injuries, if not handled properly, can become chronic problems. Racing injured may cause movement compensation, creating secondary issues. Pain is an evolutionary signal for self-protection. Learning to differentiate between discomfort and true pain is a valuable skill when in pursuit of excellence. Not all pain should be tolerated. Ambulance travel take the choice out of the tough decision. More often an athlete are faced with deciding for themselves how ‘hurt’ is hurt. 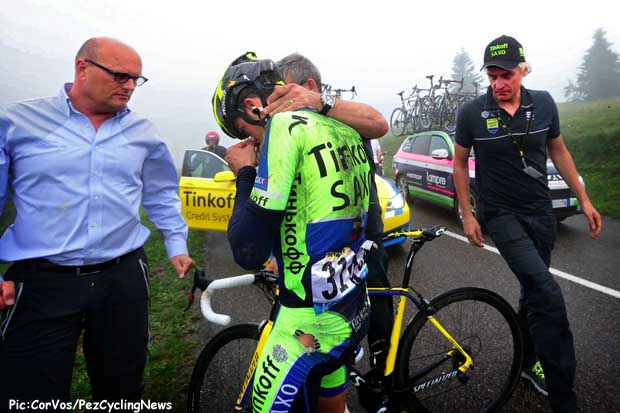 Making the Call to Ride Another Day
Hopefully deciding whether or not to DNF due to injury will occur rarely across your cycling career. When it does happen it may occur in the heat of a race with mere moments in which to decide whether or not to continue or abandon before the free lap is over or the peloton slips away, it may be a slow churn decision as the adrenalin wears off and the pain mounts, or it may be a next morning struggle as you wake and find that the stiffness and pain are still with you. When faced with making a tough choice, the following ideas are offered to help clarify the decision making process and minimize the lasting negative impacts that can be associated with choosing not to rejoin a race.

A) When adrenaline surges, making a clear decision can feel impossible. You feel invincible but the crash that caused the energy rush often means that things are a bit chaotic. There feels as if there is no time to calmly assess the situation. But with practice, centered breathing can help you quickly create a sense of physical and mental calm needed to make a better decision. Whenever a stressful situation, on or off the bike occurs, practice taking a few deep breaths and letting go of the tension of the moment. With time, just a few deep inhales will help ground you giving you the ability to clear your mind and calm down quickly so you can proceed with the confidence that you are in control of your options.

B) Practice assessing and gauging discomfort, pain, stiffness and soreness associated with routine training and small mishaps. Rate of perceived exertion (RPE) is a common concept in training that can be adapted and used to keep track of how injuries feel both when they occur and at different points of recovery. Creating an internal awareness of type of pain, impact on movement, and recovery feelings over time will give you the confidence to trust your own evaluation judgment when called upon. Confidence in your own judgment will greatly reduce the destructive post decision second guessing about whether or not you were really hurt.

C) Cultivate key advisors. Having an individual you trust, who knows you, your goals, and your abilities becomes an invaluable resource when you need guidance. Ideally this person will not have a vested interest in the outcome. You should feel confident that your longterm well-being is something they value. When faced with a ‘should I race today or not’ dilemma, this is someone you can turn to who will tell you what you need to hear, especially when it is not necessarily what you want to hear.

D) Keep it in perspective. This isn’t the ‘it is only a bike race’ speech. Racing and performance are important to you. But consider this one event in relation to the entire span of your career. If racing your bike is your culture and life, then keeping any one race in perspective is important for the best chances of healthy career longevity. An injury can keep you for one race, or improperly handled, can sideline you for much longer. This filter can help when faced with a tough choice.

E) Let it go. It can be very easy post-DNF to dwell on the decision. The internal Monday Morning Quaterbacking about a decision, how you made, and was it the right one, it can turn into a negative dialogue that will undermine self-confidence and eventually performance. “Was I really hurting that bad?”, “Did I just taking the easy way out?”, “So and so finished and he was hurt too”. The decision can’t be unmade. Making peace and moving on to face the next challenge is an important step in going forward. Whenever you begin to think about or dwell on a choice, re-focus on the things you have control over, future events and actions such as your effort and the ability to identify and work on the mental and physical skills that provide the platform for optimal development and performance.

Unfortunately in cycling, as the saying goes, there are those who have DNF’d and those who will. Being able to make quality decisions you trust, if and when the time comes, will play an important role in maintaining a healthy competitive sense of self and balance for future race success.

About Kristen
Kristen is an associate professor of Athletic Coaching Education at West Virginia University and an Association of Applied Sport Psychology certified consultant. In addition to providing peak performance education and support for coaches, athletes and teams through her company Mountains, Marathons and More, Kristen is a professional coach with Peaks Coaching Group, specializing in working with developmental and Espior cyclists. She is the co-author of Bike Racing for Juniors and has written over 20 chapters on sport psychology topics for peak performance. She can be reached at kristen.dieffenbach.mail.wvu.edu

Rui Costa Will Not Start Stage 16

Cooking on the Road: The Best of Italian Cooking with Team Cannondale