Toolbox: Reflections on Race Across America

There is a growing world-wide calendar of endurance rides called Randeonneurs or brevets, and New England drivers can thank campaigning distance cyclists for their efforts in getting roads paved in the 1890s. The roots of American ultra cycling probably started with Thomas Steven’s 1887 American crossing on a high wheeler, a feat that still amazes me.

Ultra distance cycling did not begin with the starter’s gun that kicked off the Great American Bike Race (GABR) in the heat of an August morning in 1982. Globally, ultra cycling tradition is upheld with events like Land’s End to John O’Groats in the UK, and Paris-Brest-Paris. What most us remember however was what the media made out of the GABR, which is coincidently similar to the peach basket lore surrounding basketball. Basketball came to fruition on a hardwood floor in 1891 during a frigid Eastern winter. It was a game invented for YMCA kids trapped indoors.

The informal beginning of GABR occurred almost 100 winters later at BikeAmerica, an indoor festival of cycling hosted by the city of Cleveland. The celebration featured indoor track racing, another century old form of entertainment for cyclists trapped indoors, racing on a tiny portable hardwood bowl where racers circled at speed, making us dizzy, then and now. 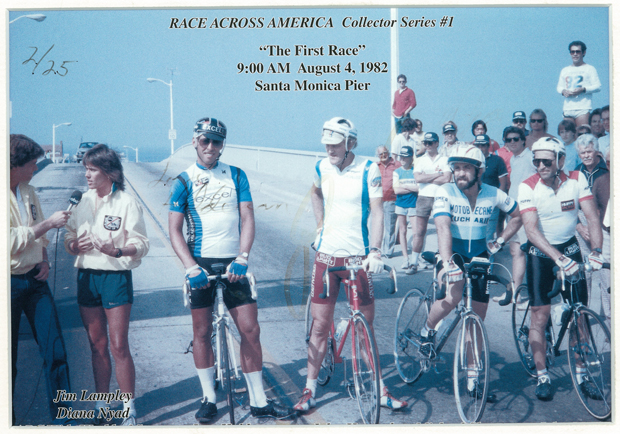 The Crazy Idea is Hatched
The GABR bud germinated at a BikeAmerica breakfast brainstorm session. The event itself brought together cycling celebrities to share their personal vignettes. Bryan Allen who had recently pedal/flown across the English Channel in Paul MacCready’s delicate human powered Gossamer Albatross was there. 5 time Olympic speed skating Champion Eric Heiden who had recently switched to full time professional cycling signed autographs and John Marino, a former LA Dodger recruit, considered then and now the father of long distance cycling was also in attendance. John had set the cross country record of 13 days, 1 hour and 20 minutes. I was there to discuss the evolving science of training and racing and tell the tale of winning the yet inconceivable Kona Hawaiian Ironman World Championship Triathlon a year earlier.

The publicity surrounding BA allowed us an opportunity to expand our audience of long distance cycling fans. The third member of our ultra community was Mike Shermer, who had set a record from Seattle to San Diego, 1500 miles in seven days eight hours. John and I discussed a cross country duel and Shermer talked us into letting him race with the understanding that he would repeat this record and break it early that summer, which he did. Arguably the most practiced endurance cyclist, Lon Haldeman, had yet to surface publicly presumably because he was always riding his bike. The summer before Lon had completed a double US crossing beating John’s record in both directions, so he had certainly earned his right to compete. Whatever chance the new generation of American cyclists like Greg LeMond and George Mount had to show their stuff in the Moscow Olympics fizzled with President Carter’s boycott of the 1980 Games.

The ultra cycling plot thickened when John Marino’s Hollywood agent Jerry Kushnick, the guy who got Jay Leno his gig on the Tonight show was recruited into the project. Jerry eventually signed Budweiser as our title sponsor and worked out a TV deal with ABC Wide World of Sports for national coverage, the only cycling seen on TV in North America that year. The four of us met with Kushick at his Hollywood home, and again that summer in San Francisco at the CitySports Bikefest to lay the ground rules and finalize details of our new venture. It was not smooth sailing and individual sponsor commitments literally came down to the wire, causing us to stress the details, when we should have been resting from our 5 and 6 hundred mile training weeks.

Clipping Into the Unknown
We finally started at the Santa Monica Pier with the intended finish line being the Empire State Building. By 1980s cycling standards the crowd that sent us off was bigger than average. Some rode with us to the city limits with our caravan of motor homes. The ABC production crew, including color analysts Jim Lampley and Diana Nyad, casually asked Lon as we were leaving the pier where he planned to stop for the night. Lon answered that his destination was New York and there would be no stopping any night.
With the exception of Nyad, I can imagine the shock waves this news must have generated among the non-endurance based TV veterans. I told my five person crew they were certain to see me at my best and very likely my worst and this certainly proved prophetic. The first day out of LA with all the traffic lights took an eternity and I ended up in last place with dehydration and exhaustion in the 114 degree desert heat just out of Redlands. Predictably, Haldeman took full advantage of the situation and steam rolled to an insurmountable lead by the third day. I rallied, passing first Marino then Shermer and never looked back.

We pushed the envelope of personal endurance with very few hours of sleep in hundred degree heat, head winds all the way from Kansas on non-aero 23 pound road bikes. The race took a toll on our bodies and every day our pace slowed. Since this is the first time anything like this had been attempted, presumably in sports history, we had no clue if we would make it or dry up and die enroute. Sports science was barely on the radar back then so we brought along a doctor to monitor our vitals. He ranted that we were all close to death since we had all lost more than 10% loss of our normal body weight, and ordered us all to sleep! We routinely ignored him and he finally gave up trying to save us.

Late Night Hallucinations
I’m not sure how my co-founders handled their ordeal, but chemical imbalance allowed me to discover the new world of hallucination. The most vivid occurred in a freezing dense fog at around 2 am in the Blue Ridge Mountains. I stopped briefly, too tired or stupid to sleep, when I had difficulty negotiating the winding downhill road with blurred vision. Briefly I leaned against the back of our motor home with none of my crew present, so I have no witnesses to what happened next.

Vividly I recall the cold wet snout of a golden retriever nuzzling my hand on the shoulder of the road. I remember his or her friendly attempt to communicate and remember petting the dog and smiling. When I blinked it was lying at my feet resting. I blinked again and realized the animal was little more than a spot of hide covering ribs and a glaring skull; road kill that I had not noticed until that moment. At this point I crawled inside the motor home for a few hours of much needed slumber.

The Finish Line
When I crossed the George Washington Bridge into Manhattan, I trailed Lon by nearly a hundred miles arriving at the Empire finish line in 10 days 10 hours. Lon was there to greet me and to this day I regret not being present to welcome Shermer and Marino when they arrived.

Not that anybody is homophobic but the name GABR morphed into the more descriptive RAAM and the Race Across America, in spite of a few lean years, has survived and thrived with a worldwide audience. Now there is a more practical multi-rider team competition that generates hundreds of entries from around the world. Also in concession to practicality, riders can now ramp up with a smaller piece of real estate. The RAW–Race Across The West—is held at the same time. They both start in Oceanside, CA, and RAW, which is really a great developmental race – for those crazies who still value moderation – ends in Durango, CO. For the full ticket, you will finish in Annapolis, MD if you make the cut off. RAAM is now held in the more merciful month of June instead of August.

Did we have the vision to see this ultra-distance cycling evolution 32 years ago? I certainly didn’t, and after finishing second to Lon I announced on Wide World of Sports that I would never do it again, and I’m happy to say I’ve met that challenge, because I like my sleep.

About John
John Howard is one of the pioneers and true legends of American bike racing with palmares including: 3-time Olympian, Ironman world champion, bicycle landspeed record, USA Cycling Hall of Fame, and elite and masters national champion. John is also an active cycling coach and the author of Mastering Cycling. Check out more information about John and his coaching at www.johnhowardsports.com.

SIDI Celebrates on the Podium in Paris