Fasted and ‘controlled carbohydrate’ training is getting increasing amounts of attention. There are suggestions that these protocols could even ‘remodel’ muscle in favour of using fat as a fuel. PEZ explores what the scientific evidence says, how pro cycling teams are using these approaches and what we could learn to enhance our performance in practise.

I’m now a Sports Scientist and Performance Coach, but 12 years ago I was pursuing my own cycling ambitions and had recently moved to France to race with an Elite amateur team. I was also a Pez contributor, providing an insight into the world of an aspiring pro with my ‘Bloke In France’ features:

The cycling world looked quite different then and the sport’s approach to nutrition was no exception. Relying heavily on folklore and received wisdom, training rides and Pez feature-writing alike were fuelled by steaming bowls of pasta and little else. Thankfully, times are changing and many teams now apply a wealth of scientific research to support rider’s health and improve their performance.

What Is The Objective Of Nutrition In Pro Cycling?
During last year’s World Congress of Cycling Science, Team Sky’s Head of Nutrition, Nigel Mitchell, stated that his aim was to help his riders become:

“Highly functional athletes, with low body mass, who can recover on a daily basis.” 10

Ultimately, the training and nutrition of a competitive cyclist should result in the rider: 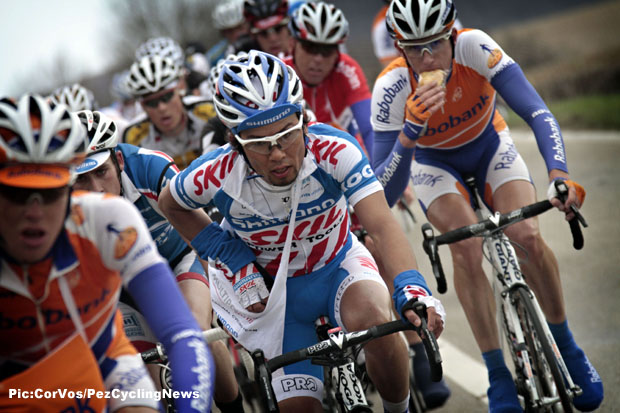 The ‘Performance Problem’
Cycling is similar to other endurance events in that it requires athletes to maintain relatively high work-rates for extended periods. However, the average work-rate for a race, often expressed as average power output, may be misleading as it fails to describe the short, intense, repeated efforts, significantly above the rider’s maximum aerobic power, which are required to escape the peloton, catch competitors and force the strongest riders to emerge.

The demands of these high-intensity efforts require well-developed carbohydrate metabolism and anaerobic energy pathways. However, riders often need to generate their highest power in the closing kilometres of an event, after many hours of relatively low-intensity riding, requiring well developed aerobic energy pathways and fat metabolism. Consequently, training must result in adaptions that enable the rider to resist fatigue and test the extremes of endurance, maximum aerobic power and anaerobic work capacity, all during the same event. This is the ‘Performance Problem’.

How Nutrition Help Adaptation
Nutrition plays a key role in supporting racing and training efforts. However, nutrient type, timing and total amounts may also be manipulated to stimulate additional beneficial adaptations. Just as training is altered to suit the demands of a race or workout, nutrition must also be adjusted according to the demands and desired outcomes of a training period.

Most athletes are familiar with the idea of ‘periodised training’, but the concept of periodising nutrition is perhaps less well known. However, as suggested by Dr. James Morton, nutrition may turn out to be a more important stimulus than the training itself:

“Although the nature of the training stimulus (i.e. intensity and duration) is important in determining how we respond to exercise training, the nutritional status of the muscle before, during and after exercise can be the dominant factor in enhancing or blunting training adaptations and competition performance” Dr. James Morton (WCCS 2014)2

Consequently, it may be helpful to think about training and nutrition in two phases: a ‘Performance’ phase – racing – and an ‘Adaptation’ phase – training.

Performance Phase
When it comes to nutrition during races and high-intensity training sessions, the potential for carbohydrate consumption to improve athletic performance has been extensively researched. Stellingwerf & Cox (2014)3 conducted a systematic review of 61 studies on carbohydrate and endurance performance, representing 679 participants, and concluded that 82% demonstrated statistically significant improvements in performance. The consumption of carbohydrate before, during and after races and high intensity training is an important element in a pro-cyclist’s nutritional strategy. Limiting carbohydrate consumption in this context may result in the rider not being able to complete the race or the training session to the required volume and/or intensity.

For example, during Vincenzo Nibali’s race winning effort on stage 2 of the 2014 Tour de France, he climbed the ‘Cote de Holme Moss, maintaining 400 watts for over 12 minutes1. This effort came after 143 km of racing and this 12 minutes effort towards the end of it would have been fuelled predominantly by carbohydrate made available through a combination of prior training adaptations and carbohydrate consumption before and during the event. 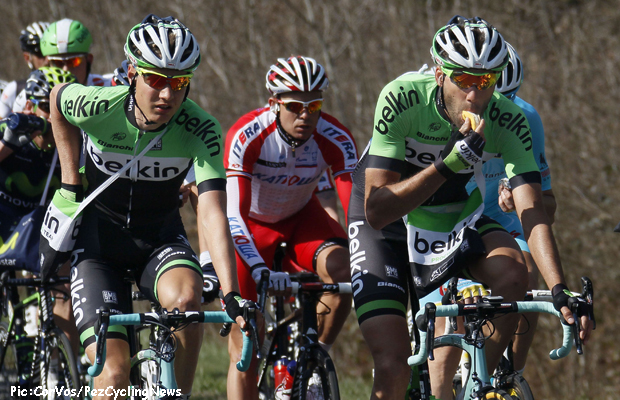 Training Phase
During training the emphasis should be on stimulating specific adaptations. Whilst a higher carbohydrate approach may be most appropriate for high-intensity sessions which target adaptations for the high power efforts that characterise road races, periods of controlled carbohydrate training may result in adaptations which improve fat metabolism – vital for the prolonged relatively low-intensity efforts which represent the majority of cycling events.

Train-Low/Fasted Training
Whilst training in a low-carbohydrate state (i.e. limiting or depleting carbohydrate prior to a session) has gained a lot of publicity recently, it’s an approach which cyclists have adopted for generations. Anecdotes abound of professional cyclists riding for hundreds of kilometres with only a pre-ride double espresso for ‘sustenance’.

Enhancing Adaptations To Training
A number of studies have demonstrated that periods of low carbohydrate training can enhance adaptations which result in improved fat metabolism.

However, as a scientist and coach, I’m always asking questions; Why could this approach work? Is there a plausible mechanism? Our bodies are essentially protein signalling systems. What signal is low-carbohydrate training sending?

Dr. Andrew Philip’s suggested the following: We know that training in a low-glycogen state appears to lead to a greater capacity to use fat stores during exercise (Philip et al. (2012)8. When this up-regulation takes place, proteins called PPAR’s (Peroxisome Proliferator-Activated Receptors) may sense alterations in fatty acid profiles in the cell, locking the protein in an ‘active’ state which drives and enhances adaptations in the mitochondrion – the ‘energy factories’ of our cells (Zechner et al. 2012)9.

Remodelling Muscle
There is a growing body of evidence which suggests that training in a fasted or glycogen depleted state may actually ‘remodel’ muscle tissue in favour of using fat as a fuel. This enhanced adaptation should help riders to produce higher power-outputs whilst predominantly using fat as a fuel, facilitating the later, high-intensity, carbohydrate fuelled efforts as demonstrated by Nibali in his Tour de France stage winning ride.

Reducing Excess Body Fatness
The finding that training in a glycogen depleted state may improve an athlete’s ability to ultilize body fat as a fuel source also makes the approach attractive for athletes aiming to lose excess body fatness to optimize power to weight ratio, but more research is required.

In Practise
In practise, controlled or low-carbohydrate training can be stressful on body or mind, so its application should be limited. A rider may begin with one session per week, perhaps starting out with a 30 minute low-intensity session before breakfast. View controlled carbohydrate training as a powerful tool that is used to achieve a specific goal during particular training periods.

Many riders find it psychologically challenging to set off for a training session without eating breakfast. Also, hunger before and during training can compromise motivation. Whilst relatively few studies have looked into this, Team Sky’s Head of Nutrition Nigel Mitchell has observed that:

“Protein feeding before and during fasted rides appears to support training and improve adaptation to endurance training while supporting recovery.”10

Some coaches and researchers wondered whether protein ingestion before and during training could compromise the adaptive response of carbohydrate restricted sessions.

In 2013 Taylor et al. concluded that:
“athletes who deliberately incorporate training phases with reduced muscle glycogen into their training programmes may consume protein before, during and after exercise without negating signalling through the AMPK cascade.” 12

(The AMPK cascade being an associated with the AMPK protein which appears to have a strong influence on cellular energy metabolism.)

Therefore, it seems that protein feeding before low-carbohydrate rides should not negatively impact the adaptive signals of carbohydrate restricted sessions.

Summary
• More research is still required to establish a robust causal relationship between the metabolic mechanisms that are being stimulated and improved performance on the road. However, restricting or depleting carbohydrate before low-intensity sessions may be a potent stimulus to enhance fat metabolism.

“On days when absolute training intensity/duration is not the major goal, train smart (according to the energy demands of the session), but not zero.”2 Dr. James Morton

• Experts still need to reach a consensus on the definition of ‘high-carb’ and ‘low-carb’.

• Ultimately, whether we’re preparing athletes for pro-level events or enthusiasts for Gran Fondo rides, the process of planning training and nutrition approaches should begin by establishing what our clients can do, determine what they need to do to achieve their goal before building a realistic and logical progression in terms of training and nutrition to take them there:

1. Decide on goal.
2. Seek to understand the objective demands of your goal.
3. Define the principle ‘performance problem’ you need to overcome.
4. Innovate: surround yourself with experts and apply the knowledge you have gathered.
5. Validate the approach by testing it in the lab, or in the field with training or racing.
6. Refine the approach (or dump it!) based on the results.

Nice fifth place for Elena Cecchini in Tour of Flanders