We have all been inspired over the years watching John Howard win championships and set records that demonstrated a seeming invincibility. In recent months, John has had a couple of setbacks that many of us face at some point – major injury. Something noticeable to those around John is that he carries the same fire and focus when dealing with an injury as when he trains and races.

I have rehabilitated hundreds of athletes, returning some to world class and Olympic competition, and recognize this strong drive and ability to focus deeply. Mental fortitude and positive self-talk are important tools that should be in every athlete’s arsenal whether recreational or competitive level, beginner or elite.

It is common for athletes to experience frustration and even a mild depression of sorts when taken away from sport for an extended period of time. John did experience some frustration with his injury that he explains below. However, when he would mention his frustration he would follow those comments with his plan for the next steps he would take on his journey back to health. Always positive, always moving forward.

In the following account, John walks us through his physical plan from injury to recovery to competition. What I want you to remember while reading is that through his healing process, he used his strong mental skills during these past months to maintain the patience and positive energy that led him to succeed in returning to the bike and compete on an elite level. Hone your self-talk skills during small challenges and it will come through for you during the bigger ones as you will see. May you never need it.

Last Spring I wrote a Toolbox piece entitled, Hitting a Speed Bump in which I described a debilitating back injury suffered from lifting too much weight. To my dismay, it resonated with a large number of friends–mostly over 40 masters cyclists and multi-sport athletes–who told similar stories of careers compromised or ended altogether because of the same type of injury. As a coach and never-say-die athlete I was driven to recover using alternative types of therapy to prevent it from happening again. I wanted to take this very bad experience and learn from it by focusing on root-cause solutions to avoid creating a set of “chain-reaction injuries.”

I knew I was in deep trouble when I fell down and couldn’t get up. While in the emergency room in a Santa Barbara hospital, my mind raced as I thought: how will I walk, let alone ride a bike again?” Performance tuning of athletes is my business, so what happens when those same athletes—myself included—end up with serious injuries? Is my passion for helping athletes limited to just healthy ones or do I continue to find therapeutic solutions for them as well as for myself? Helping athletes on all levels of recovery is the only logical option. In place of performance tuning I was now dealing with the raw basics of being able to move again on my own. If successful, my experience could be a motivator for others who face injury.

Not since I was 16 years old had I spent more than six weeks off my bike. After the initial emergency room visit my new means of personal transportation was a wheelchair. The diagnosis was bleak. I had a badly herniated L3 disc which bulged laterally making an operation difficult. The sciatic nerve was severely impinged and the entire left leg had to be dragged around like unwanted baggage.

In looking at the MRIs, my physician recommended epidurals over the course of three weeks. I completed three procedures which shrank the nerve root and provided a measure of pain relief which resulted in more mobility. I was out of the chair in two weeks and began walking with crutches. Finally, I was cycling again on a recumbent bike at 5 mph and after about month and a half was back on my road bike. My speeds were still so slow that balance was an issue due to the fact that nerves which controlled function of muscles for cycling were misfiring, making recovery very slow. Being passed by everyone was very humbling.

Over the course of the next few weeks my priority was to seek a solution of active therapy to enhance my sluggish performance and make the cranks turn smoothly again. Over time, more left-side muscles began to fire as the neuromuscular connections slowly began to respond. In spite of these small gains, I still had very inconsistent performance. The combination of nerve impingement, atrophy and scar tissue–the bane of every athlete on the mend–held sway. Had I waited too long?

Dynamic Motion Therapy™ is a muscle release technique that my practitioners and I use to improve performance in healthy athletes and promote healing in injured athletes. Since I would not be able to perform this on myself, I enlisted the help of Gene Metcalf, a local therapist whose advanced techniques include neuromuscular therapy. Since Gene’s Muscular Rejuvenation Therapy had helped athletes from a wide variety of sports including some pro athletes, I had high hope for recovery. Each session included postural evaluation in which I was checked for imbalances, scoliosis, and weight imbalances for each side of my body. He discovered a 20-pound weight imbalance of left and right legs.

At the end of each session my scoliosis was greatly improved. The 20-pound difference was reduced to three pounds. Gene continuously customized techniques throughout my treatment to include injury-specific, sport-specific and symptom-specific therapy. Repetitive motion from cycling had created scar tissue and reduced my ability to recover. The nerves that were misfiring were causing new injuries! In effect, my scoliosis was reduced allowing the “doctor within” me to resynchronize my nerves and muscle function.

He began breaking down the scar tissue with “hurt so good pain” that involved deep tissue, cross-fiber and trigger point therapy, and myofascial release. As you might guess, this was quite painful! Gene calls it “PREP” – “Pain Resulting in Enhanced Performance.” This approach made the process tolerable as the treatment began to break up fibrous growths that restricted nerve recovery, range of motion, blood flow and overall performance.

A year has passed since I suffered my spinal damage. After several sessions with Gene, my neurosurgeon, Dr. Mark Stern, concluded that my disc had healed. My former dormant left leg felt like it was part of my body again. I no longer had a bulging herniated disc, and there was no need for an operation. Depending on the symptoms, surgery may still be required at a later point in time. Results may vary for each individual depending on preexisting conditions, cumulative injuries, nerve and tissue damage.

BodyFiTTE™ to the Rescue
To speed recovery I utilized my own customized, therapeutic exercise program to reinforce Gene’s MRT. Working the muscles in a gradually intensifying series of movements worked both primary and secondary muscles. A variety of exercises at least twice per day substantially increased my flexibility and strength. The neuromuscular pathways that had been progressively revitalized were reinforced with activation and contraction of opposing muscles. For some years this form of muscular training has been part of our regular program for every athlete.

Gene and I were working to better understand how to deal with my spinal misalignments (scoliosis) and sciatic injury. By blending new exercises to address my injuries and using stretching exercises discussed in my book “Mastering Cycling,” I enhanced the speed of recovery and tailored my cycling training in response to my growing power base. I was very happy with this blend of therapies. I was back with more and more intense group training rides, feeling at peak performance again. Each day brought progress in solving and reinforcing correct movement patterns. The painful nerve impingement reactions gradually began to disappear and my overall flexibility increased to the extent that I was able to adopt my preferred lower profile position on my bike as described in a previous Toolbox article, Praying for Speed. 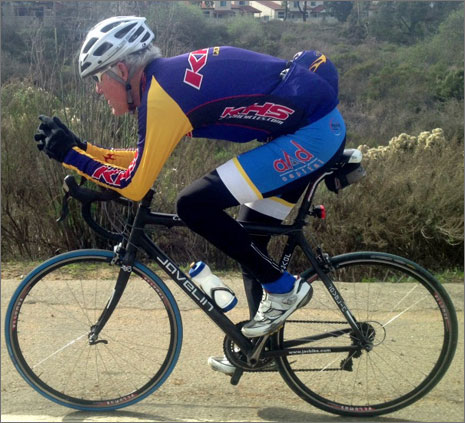 John is back on the bike riding strong after months of injury rehabilitation.

The real test came in the Pro/Am charity El Tour de Tucson in November 2012. At 109 race-pace miles and with more than 6,000 riders (including pros and many top riders in their 20’s and 30’s), this event is not easy. For the past five years my accomplished goal has been a top 25 overall position. I’m ecstatic to report, that at age 65, I once again achieved that goal.

With all due respect to the professionals who assisted my recovery, I have concluded that while aging may not necessarily be a friendly process, we have the ability to control our own destiny. Ralph Waldo Emerson once wrote. “We need not count a man’s years until there is nothing left to count.”

John Howard is one of the pioneers and true legends of American bike racing with palmares including: 3-time Olympian, Ironman world champion, bicycle landspeed record, USA Cycling Hall of Fame, and elite and masters national champion. John is also an active cycling coach and the author of Mastering Cycling. Check out more information about John and his coaching at www.fittesystem.com and www.johnhowardsports.com.

Gina Poertner, CHES is the founder of Life Balance Sports & Wellness who specializes in bicycle fitting and positioning, Dynamic Motion Therapy™, and adapted sports. Gina coaches cyclists, triathletes, and track & field athletes at all levels of ability. Find out how Gina can help you achieve your goals at www.lifebalancesports.com.