Toolbox: Bike Set Up – Us Vs. The UCI

The UCI has long defined the rules of bike set up, as an effort to eliminate certain mechanical advantages – but these limitations often don’t work for real riders. Remember that great scene in Graeme Obree’s film, “The Flying Scotsman,” where the UCI bigwig pulls out his measuring tape and ruler and tells the Scottish World Hour record holder that his bike won’t pass muster? In response, Obree pulls out a hack saw and lobs off the nose of his saddle…

As most of us who race bicycles are well aware, the UCI’s set of rules as to how we should sit on our bikes has not resonated well with riders, coaches, or bike fitters, particularly since the saddle angle rule has gone largely unenforced until recent months. Presumably, the intention is to make us all equal, so that rider X will not have a set up that offer him or her an advantage over rider Y. It is a grandiose, seemingly evolving plan but the results may not be what the UCI officials had in mind at all.

The UCI asserts “the primacy of man over machine” in order to set a level playing field in terms of equipment. This is consistent throughout the sports world with racquets, bats, vaulting poles, balls, skis, etc. The uniqueness of cycling is that our equipment – the bike and its components – tends to affect the function of the human body more profoundly than many other sports items. With this in mind, placing proper body mechanics and long-term health as a priority should be at the forefront of rule-making decisions. We know of several masters racers that have already thrown in the towel, and with the tightening of the regulations further, those numbers will likely be going up.

Like Obree, we are a bit perplexed by the UCI’s decision to govern the art and science of bike fitting. For starters, most of us who have been in this game for a while have spent the better part of our careers dialing in the most anatomically correct set-up. The operant word here is OUR. Our bikes, our set-up, and our racing licenses. In many cases the root of many rule violations is the saddle position, meaning tilt, fore, aft, and height.

As we reflect on what it took to perfect that set up, we may be reminded of why those changes were made in the first place. In our twenties, it probably was not an issue. We could adapt to anything! But as we age, the flat hard saddle can start to hurt, causing undue pain and discomfort that eventually makes the bike difficult if not impossible to ride. It is important to note that USA Cycling utilizes UCI rules for all national championships and record attempts. Therefore, there is trickle-down for all domestic cyclists, and additional rule adoptions are eventually expected for events outside of the championship arena.

Let’s start with saddle position on TT bikes. The new rules adopted by the UCI affects a number of other variables such as arm and hand position which means we may have a problem with our backs, knees, and hips, all of which affect our ability to leverage power and most importantly, breathing. Consider the fact that cycling, both in the United States and worldwide, is essentially a master’s sport, meaning that if we are age 35 or older we are called masters. As masters, we are likely to have aches and pains that younger athletes don’t have yet. If you are a young athlete, incorrect positioning can cause chronic injuries and pain that would be otherwise avoided.

This brings up a pivotal point: who were these rules made to control? What is the intended purpose? Did the UCI arbitrarily decide on these rules to better control malleable young racers? Did the UCI take its cue from motorsports where standards and restrictions in some categories essentially turn race cars into even-steven spec racers? If this scenario holds true, it must be remembered that mechanical devices are not the same as human soft tissue and skeletal structures that change over time. We hurt, we break, and eventually we quit racing because we can’t be mandated into a state of pain that affects the quality of our lives.

All of us should question the logic of the UCI’s decision to control bike fit in this manner. It is not clear if the organization has considered the laws of human biomechanics or to what depth. For additional detail, UCI Cycling Regulations and other documentation is accessible on the website of the Union Cyclist International. Let’s take a look at a few of the UCI’s rules and examine the practicality of each.

Saddle Angle
Article 1.3.014
The ruling allows a saddle angle of +/- 2.5° from level with a margin of +/- 0.5° error.
This is actually an improvement on the previous ruling which maintained that the saddle must be level. Historically, this ruling was rarely enforced and riders tilted their saddles to accommodate more physiologically sound positioning. With the new ruling and more diligent enforcement, the allowance does not go quite far enough to keep the human body happy.

While 2.5° nose down may be a good saddle position for a recreational road rider who sits more upright with hands on the tops, typically it is not a good saddle position for a TT racer who is leaning further forward. By limiting the saddle angle to 2.5° nose down, the majority of racers are going to be in a position where their pelvis is rocked back, further closing off the core that is already compromised by the mandated horizontal arm position discussed below. By allowing one additional degree of downward saddle tilt to a total of 3.5°, the core is opened up by improving pelvic angle, which in turn allows the body’s circulatory and respiratory systems to function at a more optimal level during this type of exertion. It also decreases stress to the low back, a problem area for many cyclists.

Arm Position and Aero Bars
Article 1.3.023
The new ruling is that aero bars must be positioned so that the forearms are parallel to the ground with a maximum elbow angle of 120°. The ends of aero extensions must also fall within a range of not more than 75 cm forward of the bottom bracket unless a morphological exemption is granted.

While it is agreeable that a maximum angle at the elbow be capped at 120° for safer handling of the bike, requiring the forearms to be in parallel position is another matter. Placing the forearms at parallel disengages the support muscles of the core. The core represents thirty-five or so anterior and posterior muscles that provide a stable platform so that the athlete can use the big muscles to generate more power. The core is the enabler of a cyclist allowing for better control. When core involvement in the cycling effort is eliminated, control of the bike is compromised, thus compromising safety. By raising the forearm angle a few degrees up from level, say 15°, the core is engaged providing the cyclist with greater efficiency and increased control of the bike. Aerodynamics may be the main UCI concern, but at what cost? 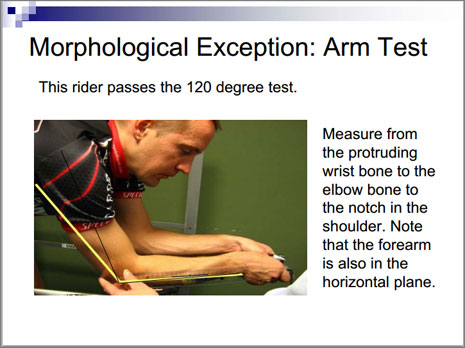 Hand Position
Good news/bad news on this one, falling under the same Article 1.3.023. Cyclists may use upturned bar extensions to keep hands in neutral position or straight bar extensions, which place the hands in a downward position of ulnar deviation. It’s nice to have choices. However, the bent position of the hands at the wrists is not advisable as it places undue stress on the radial nerve and locks up the bio-kinetic chain of muscles and tendons in the arm that affect comfort. Maintaining hand position in ulnar deviation may well trigger nerve issues that will not be completely noticed until the damage is done.

KOPS
Article 1.3.013
The Knee Over Pedal Spindle ruling states that the knee cannot be forward of the center of the pedal spindle. The limit is measured by race Officials by placing bike and rider on a jig and using a T-square.

This is another facet of the saddle placement requirements and it has a number of consequences. If the athlete happens to be born with a tibia that is disproportionate to the femur, it will have an effect on the KOPS placement. If that same athlete picks a frame with a seat-tube of 77-80 degrees, it will adversely affect saddle height and plumb dimension, placing the athlete in an unfavorable position. 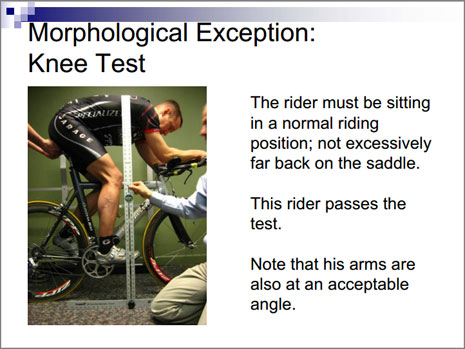 Photo Credit: USA Cycling Bike Measurement for Commissaires
Many anatomical variables in play here, many to the disadvantage of performance and health.

From a physiological standpoint, the test goes against proper measurement of KOPS. The fulcrum is behind the patella (kneecap), rather than in front of it. To properly position a cyclist over the spindles, the measurement is taken based upon direction of force rather than the simplistic anatomical landmark of the front of the patella. The difference could be up to 1 cm if measured incorrectly. By using the front of the patella in relation to the spindles, the ruling forces bike fitters to compromise proper placement of a cyclist by placing them behind the spindles. This moves the force to a point behind the spindle instead of over the top during the downstroke, thus stressing the patellar tendon and compromising the low back region.

The measurement of 1 cm or even 0.5 cm may seem small, but it is very significant to the human body in terms of protecting the joints and muscles from injury. Our PowerFiTTE positioning protocol takes this into account and places importance on optimal health through proper body mechanics. And isn’t good health a primary reason we ride our bikes in the first place?

A Sum of the Parts
A complete discussion in terms of anatomical function as it relates to the rules is warranted although not practical for this format.

Let it be clear that we are not anti-UCI. In fact, we agree and applaud the organization for its thoughtful consideration to prohibit the removal of closed-tip retention devices on front forks in the interest of safety and saving lives. It is in this same vein of safety that we created our PowerFiTTE protocol that addresses what bodies really do on bikes. FiTTE is an acronym for Fitness, Technique, Training, and Equipment. The current crop of rules compromises this relationship, detracting from safety. We hope the UCI will view this critique of its rules on bike fitting as constructive criticism in the continued evolution of our sport.

John Howard is one of the pioneers and true legends of American bike racing, with palmares including: 3-time Olympian, Ironman world champion, bicycle landspeed record, USA Cycling Hall of Fame, and elite and masters national champion. John is also an active cycling coach and the author of Mastering Cycling. Check out more information about John and his coaching at www.fittesystem.com and www.johnhowardsports.com.

Gina Poertner, CHES is the owner of Life Balance Sports, focusing on cycling, triathlon, and track and field. She is also a FiTTE System Practitioner and Instructor for John Howard Performance Sports specializing in bicycle fitting and positioning. Find out more about Gina and her coaching at www.lifebalancesports.com.