The Tour is less than a week away, Summer is heating up in the Northern Hemisphere and the cycling season is in full swing. Let’s take a break from the training and wander about a bit…

Be Nicer
Over the last few weeks I’ve been riding a bit more, but my fitness is still pretty low, so I ride slow. It’s great! I can’t tell you how many times I’ve enjoyed a pleasant conversation with a similarly paced cyclist who’s out. Typically I’ll roll up next to them and say something like “Good Morning” and that will kick off a conversation that ranges from a sentence or two on out to a full fledged ride together if we happen to be going the same place. Of course they center around riding and equipment, “ where ya going” or “where ya been,” but often the segue into other areas too… and that’s the fun. Just to share the sunshine and maybe learn something new.

Of course there are the other types as well. This weekend I did a little ride and on the way home I happened upon a group of riders as the light turned green. Mostly older than me, I figured I’d tag along for a few minutes. As we started to accelerate there were two cars waiting for us to pass, blinkers on, before turning right. One of the guys in front of me swings left around the cars and takes a swipe at the second car in line. What? Blinkers on, waiting patiently and he still gets agro about it…hmmm, but it gets better.

Upon pseudo-swiping the car he notices me and promptly gears up and stomps on it. Well, it’s the draft so I can sit in pretty easily – even though I’m on a cross bike with one 65 inch gear that puts me north of 120 rpm at 20 miles per hour, so I default to “spin like mad, coast like mad, spin like mad” as my routine to stay in the draft. Sir Speedy didn’t like that so he gassed it again up to about 23, not unruly speed, but more than they’d been doing. Head down chugging along he takes the occasional under the arm look to see if I’m dropped. I’m not. Back to it. Meanwhile his riding buddy rolls up and we engage in a short but friendly chat about the bike I’m on and wave good bye as I reached my turn. Curious what motivated Sir Speedy to opt for avarice instead of nice. But then again people are strange.

Next time you ride – say “Hi” to everyone….it’s great for the masses and surely annoys the would be World Champs! 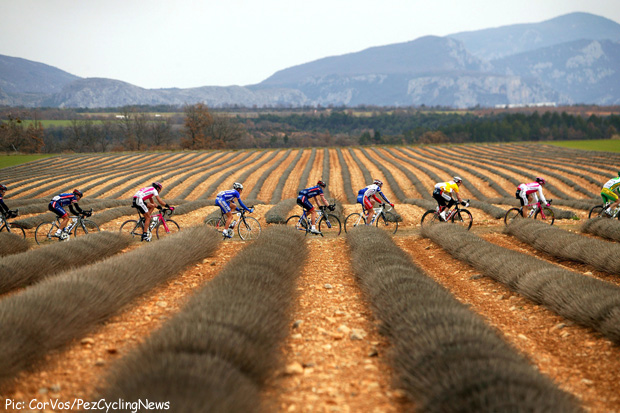 Ok, so the guys at the Tour don’t have time to stop and say hi or admire the view – but you do!

Stop Falling Down
I’ve been lucky enough to watch a lot of racing on the internet and television this season. Not just euro-classic stuff like Roubaix or Flanders, but lots of National level races in the US too, mostly criteriums. One thing that continually amazes me is the ease with which people fall off their bikes. I don’t mean getting taken out in the classic sense where something happens right – and I mean right – in front of you and you have no escape. I mean guys that come into a crash scene several seconds after the carnage has started and seem to get that deer in the headlights reaction and simply pile into the melee and crash.

It happened a bunch at Tulsa Tough a few weeks back. Granted, night racing is its own challenge, but time and again – and there were a lot of crashes – I saw guys missing easy and obvious paths away from the accident and falling down for seemingly no good reason. These were generally Pro/1 and 2 racers who supposedly represent the upper echelon, yet they can’t seem to handle their bikes very well.

This has been an open topic of conversation across categories for years. When I started racing it was the Cat 4s who took the brunt of the criticism as it was the starting point; now it’s Cat 5s who are the scapegoats, but I’m telling you that it filters up through all of the categories – both men and women. Often blame is placed upon riders who upgrade too quickly and I think this has some merit. USA Cycling has, perhaps inadvertently, thrown wood on the fire with a new round of upgrade requirements that make upgrading easier since one’s points never expire!

There is talk of mandating a skills and handling clinic as part of an upgrade process, and USAC currently gives upgrade points to those who take a skills course, so that’s a start. Then again, it is often those who most need a skills course – including category 3 and 2 racers, who through hubris or arrogance don’t think they need it. My advice, having only crashed REALLY REALLY hard a couple of times in 25 years of racing and riding? First, get over yourself! You can learn something from every ride, every clinic, and every other rider on the road. Second, stop falling down just because something happens around you…falling hurts!

Ride Everything
I jumped on my single speed – belt drive – cyclocross bike on Sunday morning, and it was good! The thing weighs 14 pounds and is a blast to ride – even up the slightly too steep grades at my local park. It got me thinking; maybe as part of the upgrade process riders should have to ride everything! Race at the track, ride road, do a dual slalom, rip up a ‘cross course. I’m a better rider for having tried nearly everything (ok, I can’t jump a BMX bike yet!) and ridden with a wide range of talented mentors. Slipping around on dirt, reintegrating the paceline on the track, diving down my favorite twisty descent, it’s all part and parcel of what it means to be a cyclist in my book. Treat yourself to something new and fresh and try a discipline you haven’t ever done, or ride a bike you haven’t touched in a few months or years. It may just change your life!

Tune Your Bike
As part of my return to riding I recently suffered one of those catastrophic mechanicals we all dread. Same bike I’d been riding all year with no problems and suddenly a single shift sends the rear derraileur into the spokes and tears off the hanger – as it’s supposed to do. Well, as luck would have it I procured a new frame from a friend and proceeded to swap over the parts before I realized that the original wasn’t actually broken (yay). In the process of swapping my parts over I discovered a slew of small problems that had gone overlooked for who knows how long. I had installed standard derailleur cables in my Campy shift levers. They are something like 0.1 mm wider than the Campy spec, so they stuck and I had to call in a favor at the local shop to get em out.

Next up was a missing “B” spring tension bolt that had gone missing, yet somehow not impacted the previous bike’s shifting. The “B” spring sets the jockey wheels spacing to the cassette. Without one your upper pulley wheel rubs the cassette and irritates you to death with mediocre performance, noise and incessant rubbing. In case you were wondering, the Campy “B” spring is so obscure that it’s not even listed on their replacement parts diagram. Six or eight shops later and I’m still hunting one down, hoping a friend with a spare derailleur comes home soon.

A few other issues cropped up including the discovery that the new bike used an Italian threaded bottom bracket, necessitating a new Phil Wood version for $130 to fit my sweet square taper Campy Record Cranks. A tight seatpost from too much sweat and not enough maintenance, and the ever present hassle of a good headset adjustment – my Achilles heel in bike builds.

The long and short of all this is that my road bike has been out of commission for about 3 weeks now and largely because I didn’t take the time to do those occasional tune ups and bike checks that make up nearly every list of “important things to do.” I hope I learned my lesson this time. I spent hour upon hour sorting out these problems that were easily remedied with a little common sense and some attention.

OK, enough waxing; enjoy your ride and give these a try!

Roadside At The British Nats!