Toolbox: The Future Is So Bright

Every year we get to watch the rise of talent on the professional scene. From new riders who seem to rise from obscurity to greatness before our eyes, to those we’ve watched toil and grow for years who finally break through to a new level. Each is inspiring and it’s easy to forget that, in truth, these riders have all paid their dues to the sport. Sometimes it’s nice to see the starting point of the journey too…

I have previously written and talked about the value of the Old School to the heart and soul of cycling. Last week I was fortunate to spend a few days at the USA Cycling Western Regional Development Camp meeting and working with some of the new school. This is an annual camp offered by USA Cycling to give young riders the chance to learn the craft of racing while offering USA Cycling a look at the next crop of rising talent. It is the perfect first step in the pipeline to becoming a pro.

This year’s camp was again headed by coach Larry Nolan, a multi-time Masters World Champion and director of one of the top junior programs in the U.S. Larry’s professionalism and experience have made this one of the premiere camps offered by USA Cycling. In addition, his staff of coaches and support personnel including Laurel Green, Steven Meilich, Deb Nolan and Justin Morgan, brought all of their talents and focus to the thirty-four attendees for each of the six days.

Here is the whole crew: 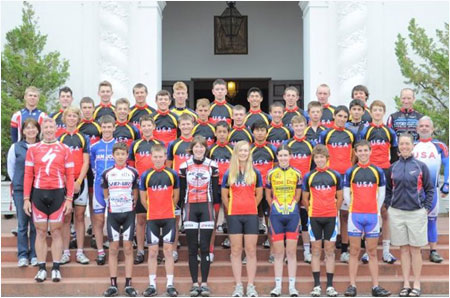 Talent Identification
One of the primary goals of the camp is talent identification. The riders complete two separate field tests designed to estimate their functional threshold power and maximal aerobic power. The first test is approximately twenty minutes, the second around five. Both offer that unique level of pain and suffering that we cyclists seem to cherish. It’s true what one of my early mentors said: “You must suffer like a dog, Mattie!” Too true…

The rider and bike are weighed and then sent out on course. Several of the campers had power meters, but since we know the length of the courses, each rider’s weight, the elevation gain, wind speed, and their time, it is fairly easy to get power numbers for each of the participants. These numbers are then forwarded to USA Cycling along with an evaluation of each rider and a recommendation of who might be ready for the jump to international competition.

Improvement
This is my second year at the camp and one of the first things that stood out was the improvement of the returning riders. Nearly every returning rider posted a faster time than the previous year, some by as much as two minutes on the twenty minute test. While the ramp rate of year-to-year gain may taper, a 10% improvement is certainly impressive

The other thing that really stood out this year was just how fast everyone was. The general pace of the rides was manageable, but when they decided to throw down we were easily and frequently above my 320’ish watt threshold as I watched some group of riders climb away from me. That they could recover and hit out again as often as they wanted was the really impressive part…they just kept coming back for more.

Skills, Drills, and Laughs
Each day we would practice a different race skill or scenario. Group pace-lines, attack and counter attack, leadouts, fast cornering, and a simulated road race to name a few. Then we got to my bread and butter… cornering skills.

We set up a great little race course in a giant parking lot, the riders were divided into 8 teams of 4 and the course was divided into 4 sections: a straight line sprint, a short but narrow set of tight corners, a wide open set of “S” turns, and finally a combination of all towards the finish line. Each member of the team would rotate forward one station on each lap, so everyone got to ride all four sections.

The brackets were set up so the top two teams would advance to the final four, and the last two teams would battle for fifth through eighth. This guaranteed that each team would race twice for a total of 8 laps on the course. The fun thing about the circuit is that, while it favors those with good snap and excellent handling, it’s a team race so the competition ended up closer than you might expect. Of course the greatest satisfaction was that there were only two minor crashes and no injuries. Whew!

Developing Young Adults
Perhaps the most impressive part of camp are the riders themselves. These guys and gals are focused on cycling and truly love the sport, but more importantly they demonstrated a degree of maturity that was not entirely expected. The riders were always pleasant and respectful to the coaches and staff, often addressing us with mister or missus – a nice change from the all too common entitlement attitude seen in many of today’s teens. Their parents can be proud of the young men and women they are raising.

The riders were similarly toned towards each other. I didn’t hear one argument or disparaging word throughout the camp. Rather they functioned as a team, each rider encouraged and cheered by their peers.

Of course they’re still the ‘young’ side of young adults so plenty of antics, jokes and pranks were devised, and a few late night “go to sleep, now!” requests had to be enforced. I think the perfect crescendo of the team ethos meets youthful exuberance had to be the re-test offered to a camper who had been sick on the first day. The picture below covers all you need to know, except that it was hilarious and a blast to be part of the group, though I kept my kit on! 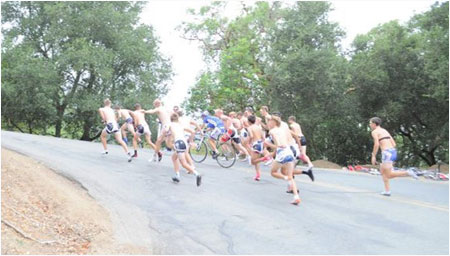 Summary
The USA Cycling West Region Development Camp serves several important goals. It is a talent identification tool used by USAC to help bring forward the next wave of young riders, but perhaps more important it is a crucible for developing riders to challenge themselves in new and familiar areas. That it fosters such a sense of community and loyalty year over year is a testament to the talents and commitment of the staff that works it, and importantly the riders who attend. To see the USAC pipeline in action is to marvel at the depth of talent that has embraced cycling as their discipline. The future is bright and I can’t wait to watch it…

About Matt McNamara:
Matt McNamara is a USA Cycling Level 1 coach with over 20 years of racing, coaching and team management experience. He is the founder and president of Sterling Sports Group, a performance coaching company focused on creating a seamless interface between athlete and coach, technology and personal attention. Visit us online to learn more at www.sterlingwins.com.

The Quick Release And Croce d’Aune

Polar RCX5: We Have A WINNER!