Memories of the Tour de France take on lives of their own, and nothing compares to the impressions of seeing the roadside action with your own eyes. In 1985, our Ed Hood drove 800 miles through the night to see just one stage of le Tour, but it seems like yesterday…

—–
The sound is like a tidal wave, a swelling roar, rolling through the forest; but it’s no tsunami, it’s the combined sound of an approaching fleet of cars, motorcycles and helicopters, crowned by the tens of thousands of fanatical French fans screaming themselves hoarse.

In the eye of the storm sits a small, stocky man on a silver low-profile time trial bike which bears his name in red letters. He’s riding visibly faster than the other 150 or so riders who have passed before him; he sits rock-still on the saddle and his tyres rasp on the tar. In order to see him we have to stand dangerously far-out into the narrow forest road then jump back at the last moment to avoid the mass of motor vehicles in his wake. 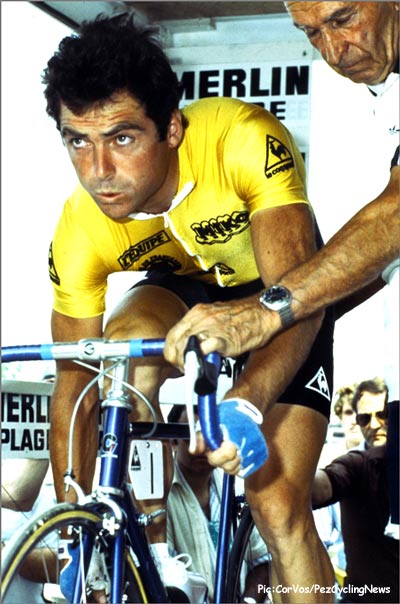 Bernard Hinault in yellow, in the start house, circa 1985.

I only saw his face for a second or less but I can remember it distinctly, jaw set in determination, his eyes burning with the fire of some warrior chieftain – the man is Bernard Hinault; it’s the Tour de France 1985, stage 8, a 75 kilometre time trial from Sarrebourg to Strasbourg and “The Badger” is cementing his legend.

Back In The Day
It’s late Saturday afternoon and we’re in a forest on the French/German border; less than 24 hours earlier we had crossed the mighty Forth road bridge in Scotland south-bound in our Peugeot 205 GTI; it was different back then, there weren’t many speed cameras and if you drove a car fast it didn’t mean you were an enemy of the state. By midnight we were on the ferry out of Dover headed for Calais; at breakfast time we were deep in France buying L’Equipe and choosing our spot to watch “the race of truth”.

Coming into the time test Hinault lay fourth behind Danish team mate Kim Anderson who had taken the jersey on stage four from Fougeres to Port Audemer. Hinault had won the prologue in front of his adoring home fans in Plumelec, Brittany, but had been happy to let the jersey go on stage one to Belgian sprinter Eric Vanderaerden (Belgium & Panasonic) to keep the pressure off his team. The rapid and versatile Belgian with the blond mullet (which he still favours 21 years later) then held it through stages two and three, which was a team time trial, won by Hinault’s squad – La Vie Claire.

It was expected that Hinault would win the time trial but nobody was quite prepared for the gaps he opened, future Tour winner Stephen Roche (Ireland & La Redoute) was 2-20 back in second place and chrono specialist Charly Mottet (France & Renault) was third at 2-26.

Hinault would go on to win this Tour despite a breaking his nose in a crash and a major altercation with precocious American team mate Greg Lemond, who believed he should have been given his freedom to win after his master‚ cracked on stage 17 – but those are different stories.

In those days the ladies’ Tour preceded the men’s race, we were unimpressed by the speed of the bunch which took 1-54 to ride the 46.6 miles – that was 20 minutes more than Hinault.

Before the time trial started reigning world champion Claude Criquielion (Belgium & Hitachi) rode the whole course behind the team car for a warm-up; his sparkling white long sleeve rainbow jersey contrasting with the oiled mahogany sculptures that were his legs, that dude was cool. 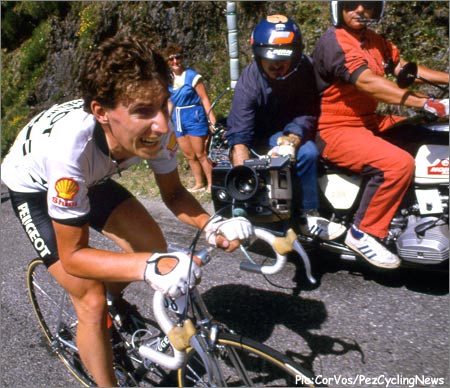 Robert Millar, despite losing bags of time in the TT, still got the biggest cheers from the Scottish fans.

If “Claudy” was cool then his German team mate, Dietrich Thurau was ice cold, “Didi” rode the time trial in a sleeveless, orange Hitachi skinsuit, back flat and parallel to the road, blond curls spilling-out from under his aero crash hat, I’d have sold my soul to the devil to look that good on a bike.

Our loudest shouts were reserved for our very own Robert Millar, (Scotland & Peugeot) but it wasn’t to be for the slight man from Glasgow who gave away a morale-crushing 6-38 to Hinault – that’s around a minute every seven miles.

After Hinault’s demonstration and despite the armada which always trails the maillot jaune, Kim Anderson’s passing was an anti-climax, he was 7-28 slower than his boss and patently not enjoying being “alone and un-paced.”

For us it was another 800 mile all-nighter with Barry White and the Peugeot; but 21 years later we still talk about our afternoon in the forest with Bernard.