Alpe d’Huez: Where Champions Are Born

No other place defines the Tour de France like Alpe d’Huez. It stands menacingly in a steep and hellishly hot valley, it hurts all who climb it, and destroys many. Some it makes immortal – champions who will be forever known as conquerors of this epic battle ground. Tomorrow it will happen again. Ed Hood has beared witness to 3 of the battles.

The things I remember most about Andy Hampsten in 1992 are how skinny he was and how patient he was with the gaggle of journalists around him, eager to record his every word. This frail man had just conquered the sacred heights of l’Alpe d’Huez in the baking, airless heat of July.

‘That’s Boulder,’ and he spelled it out, letter by letter, ‘Colorado in the
United States.’ 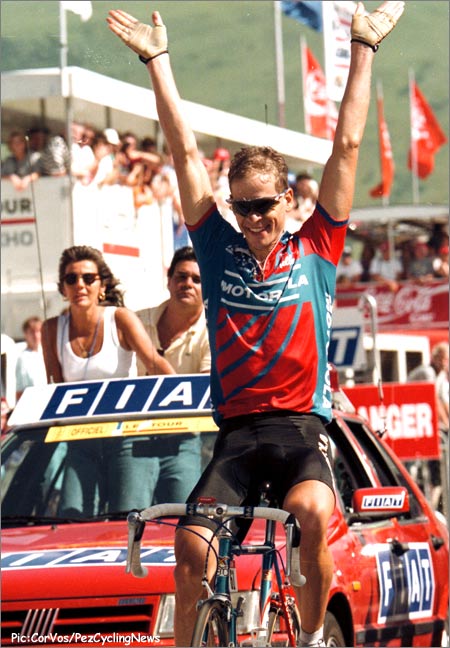 Andy Hampsten dropped his breakaway companions and soloed to his finest stage victory on the Alpe in 1992.

Just an hour before, we had watched him ride his red, white and blue Eddy
Merckx, Motorola team bike up through the sea of people that lined the
sinuous strip of tar that climbs from Bourg d’Oisans on the valley floor up
to the thin air of l’Alpe.

As a spectator on l’Alpe you have no choice but to step-out into the road to
see the action, jumping back at the last moment to avoid being splattered by
the following cars and motor bikes. My Buddy John and I were just like every one else that day – hyper. You just can’t help it; the sun, the thin air, the buzz, the noise and the sheer sense of occasion induce a sense of euphoria.

In contrast to the frenzy around him, Hampsten looked tranquil; hands on the
tops – sitting-up to make sure what little oxygen there was made its way to his lungs, staring-ahead oblivious to the hysteria he was causing.

That year we dropped the lid on the convertible 10 kilometres south of Calais and didn’t put it back-up until we were back in England on the way home four days later. I applied my sun cream religiously every hour, my macho buddy John didn’t and ended-up hallucinating with sun-stroke.

Arriving late the night before the stage we zipped-up the 21 hairpins with the hi-fi on ‘blast’, we blended-in perfectly with the barbecues, parties and well-oiled Dutch fans with their camper-vans who waved and clapped as I gave it my best boy-racer gig. Up in the ski bars the bierre was flowing, the anticipation was building and there was nowhere on earth we would rather have been. 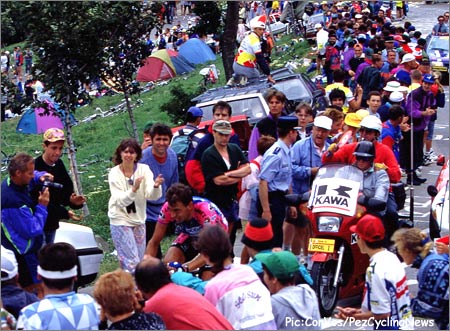 In 1994, Roberto Conti earned a place in the history books on the fabled slopes.

Fast Forward Two Years
In 1994 the convertible had gone and I was reliving my youth with an 80’s Opel Manta coupe, we had the sun-roof and all the windows down as the 70’s soul music pushed us south, down the Auto route de Soleil. The drive down the valley to Grenoble is beautiful, with craggy peaks, forested slopes and vivid, pollution-free blue skies. Even the girls on the auto route peage [toll] booths were gorgeous. From Grenoble the road heads east, up a narrower valley to Bourg d’Oisans, playing hide and seek with the river as it climbs gently between snow-capped peaks.

L’Alpe is a no-messin’ climb, hang left just outside Bourg and the front
wheel practically bumps-up as the climb rears and it’s straight into those
21 hairpins.

If Hampsten’s victory wasn’t a surprise given his natural prowess as a climber, then the winner in 1994 certainly was. Roberto Conti was the pro’s pro, a man who won little but worked hard at his trade – closing gaps, riding tempo, fetching bottles, taking clothing to and from the team car were all in a day’s work for the swarthy Italian. L’Alpe would be his biggest win.

He had given a breakaway group the slip and was alone on the mountain; there was none of Hampsten’s Zen-like grace about Conti. He bore the look of a man who knew that the hounds were off the leash and hot on his trail, anxiety burned from his eyes – sparkling white against the weather-beaten teak of his cheeks. No smooth rhythm from Conti, just a desperate punching at the pedals to keep the swell of noise from the crowd in his ears all the way to the finish line.

Domestique he may have been, but for one July day he was King of l’Alpe
d’Huez.

If Conti’s win was a surprise then the victor in 1995 was expected, but no less impressive for all that. That was the year we headed south from after the stage at l’Alpe and headed for the Riviera with our spouses on the cell phone every day asking when, or if, we were coming home – but that’s another story. 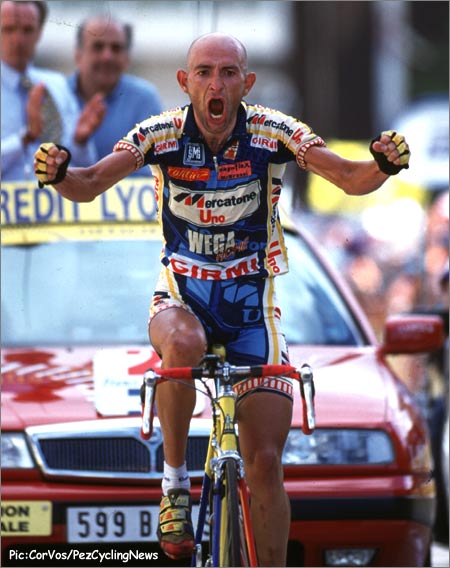 Many Ricards (potent local, aniseed-based spirit) later we stumbled-out into
the sun with just about enough time to collapse over the nearest available
crowd-control barrier in time to see the lone leader.

Marco Pantani was not a perfect man and his decline and fall are a sad tale.
In his prime though, he was one of those riders who make the sport so special.
Attack, no tactics, no thought of tomorrow – just get up that road; ‘catch me if you’re good enough’.

He was an elfin man, the very best climbers have to be, an extra couple of kilos and they become, ‘just another rider.’

Unlike the elegant Hampsten and the desperate Conti, Pantani had a style all
his own. Toes pointed down, a light touch on the pedals, high revving, hands on the tops but back hunched, lower jaw jutting, teeth on display, the sweat
rolling-down his shaven head across his face and dripping onto the top-tube.
He was no saint and some parts of his life are best forgotten, but that day on l’Alpe was indeed, an ‘exploit,’

Be Your Own Coach: The Race Season