Inside The ’06 Tour de France Presentation

Reporting almost live from Paris at the unveiling of the Tour de France route. PEZ goes inside the 2006 Tour de France Route presentaion, and in true “Grand Boucle” spirit, we present the action in 5 stages… or йtapes, as the locals say.

– Reported by Erin Berard –
The Prologue – From My Hotel to My Seat
• Start Time – 11:00 AM
I awoke in my hotel in Paris located just off the famed Champs-Elysйes. After a reporter’s breakfast of champions – that is, several cups of coffee in a local cafй, it was time for my equipment check.
Digital camera? Charged. Set to high resolution? Done. Laptop? Charged. Cell phone? Charged.

• Meet up with team: Accompanying me today was Joe Tonon, Co-founder of Destination Cycling, a top tour company based in Marblehead, MA. As organizer of the Tour de France Challenge, a ride that mirrors the exact Tour route the day before the professional peloton, he was just as anxious and interested as the pro teams in the 2006 route. 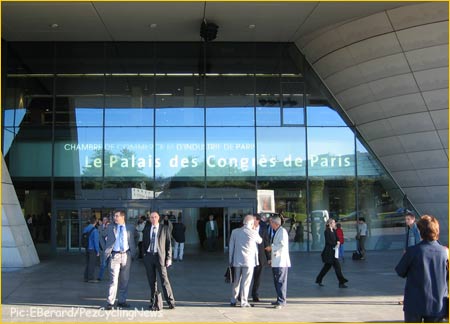 • Ride to the start: Well-fuelled for a day of schmoozing with the Tour’s big wigs, I jumped in a taxi to Le Palais du Congrиs.

• Sign-in: Waiting around to sign-in for my press pass, I could feel the anticipation in the waiting area, as the crowd gathered. I could hear the rising din of small-talk in various languages. People were talking at each other but not making eye contact as they tried subtly to scan the room… It was an Easter egg hunt in October, all eyes were moving fast, looking for the celebrity riders or team managers to show up. 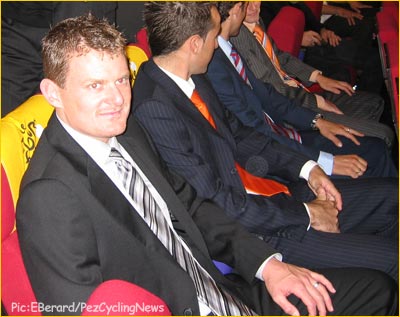 Here’s something you don’t see every day – Floyd in a suit!

It was difficult to recognize riders from managers from press, as there were no yellow, green or polkadots, everyone in formal business attire, even Floyd Landis (who asked us to take a photo of him in his suit, promising it would be the last time we would see him in a suit ALL YEAR.) The only team showing a hint of their true colors was Rabobank, in true Dutch spirit, who sported bright orange ties.

Andy Riis and Floyd Landis were there, I spoke with Floyd who had jet set into Paris the night before after being in Malaga, San Diego, and Dave Zabriskie’s wedding last weekend. Floyd’s big news was that he had started riding, not a bike, that is, but the Harley he received from his wife after turning 30 years old on October 14. He was now just starting to bike, pacing behind the Harley.

Andy Riis spoke to me about Phonak’s new BMC bikes that are now available for purchase by the public. [The PEZ test-BMC has a just landed so watch for our review coming soon. – Ed.] He has attended this presentation for the last 6-7 Tours. If you want to catch up with him this winter, he’ll be skiing in the Swiss Alps, not Colorado. 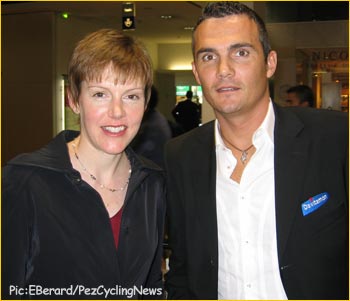 How could I resist a pic with the darling of French housewives? Richard Virenque was not wearing his faux pony-haired blazer this year but instead a reptilian necklace on a leather cord. (“Chien fou” style).

I had last met up with Jean Patrick Nazon in 2003 the morning of the Team Time Trial in Saint-Dizier when his hair color had matched the yellow jersey he had won the day before. Jean Patrick is from the Vosges region so was looking forward to the 2006 Grand Dйpart in Strasbourg.

• Line-up: Close to 11 AM, the crowds started lining up to enter the auditorium, the mood changed to that of a rock concert, everyone herding towards the doors (a peleton of suits).

• Start: I had a dйjа vue to my last Bon Jovi concert, walking into the dark auditorium, then up a short flight of stairs, only strip lighting keeping you from tripping…the stage, illuminated by a running yellow screen with scenes from previous Tours. We are seated by color code, yellow for riders, green for Press, red for partners/sponsors). 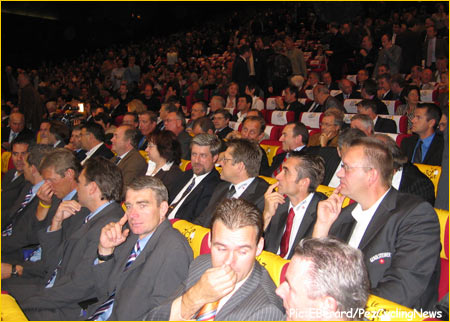 ”Everybody inside- let’s get this party started!

Stage 1 – Call To The Line
After dropping my bag off at my seat, I grabbed my digital camera and headed down to join the other photographers en masse illuminating the rows of riders and team managers, in the first five rows. They appeared like sedated animals trapped at a circus, perma-grins and red eyes around.

Where is Lance? Where is Ullrich? No where to be found… Caught in the flashes in the front rows were Johan Bruyneel and other Team Discovery Channel management, Floyd Landis, Ivan Basso, Giberto Simoni, Christophe Moreau, Michael Rasmussen, and taking his seat late Thomas Voekler (another Alsace native). 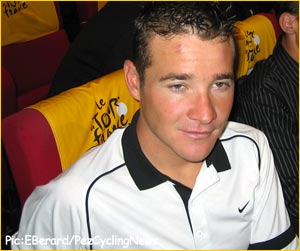 • I asked Thomas about his summer vacation and his eyes got wide, “What vacation?” I finished the Tour and then the Vuelta! Right now, for the last 10 days, I’ve only just started to enjoy any vacation time”…He is living near Nantes but is happy to return home to Strasbourg on July 1, 2006. 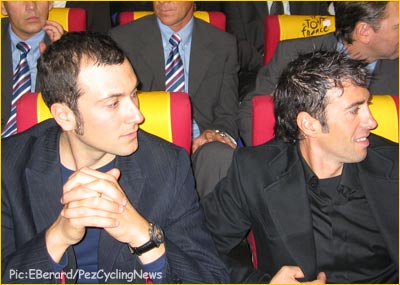 ”Hey Ivan – check out that reporter from PEZ, she’s way better looking than that guy who interviewed me at the Giro…”

I currently live in Kolding (flatter than nowhere) Denmark, so I caught up with Ivan Basso and couldn’t help asking him how he liked training in Denmark. He laughed and grinned – lucky he’s from Italy… I chatted with Bjarne Riis in my broken Danish, who has a house in Vejle, near Kolding, and got him to break a smile as well. (A PEZ-first!) 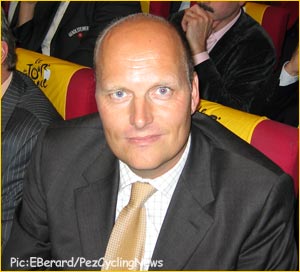 Stage 2 – Presentation by Patrice Clerc, Prйsident d’Amaury Sport Organisation
Patrice Clerc took the stage but before starting to talk, they showed a movie highlighting this year’s Tour. Complete with sentimental Phantom of the Opera Techno-remix music, we witnessed a very sentimental look back at the scenery, stage victories, crashes, the best of French village Tour dйcor before ending with a French child spectator wearing a Cofidis hat… 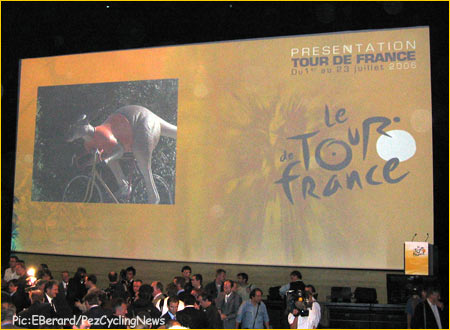 Surprisingly (or maybe not…) absent from the 2005 video were highlights of Lance and Team Discovery Channel, nor were Armstrong’s past victories acknowledged. Then, suspiciously, after a slightly upbeat introduction of the event and ASO organization, the mood shifted to deliver us a heavy dose of reality, focusing on the potential of drugs and doping in the peloton.

Clerc called for an increase in out-of-season/race testing, anytime/anywhere testing, and pre-TDF race testing. He praised the people are willing to stand up and fight for a “clean sport” and denounced people who forced others to keep silent. Unfortunately, this first speech set the somber mood for the next two hours.

The issue still remains whether or not the Grand Tours (The Tour, the Vuelta, and the Giro) will participate in the Pro Tour. Clerc kept any timeline for decisions quite vague, even though the new UCI President, Pat McQuaid, was present in the audience. 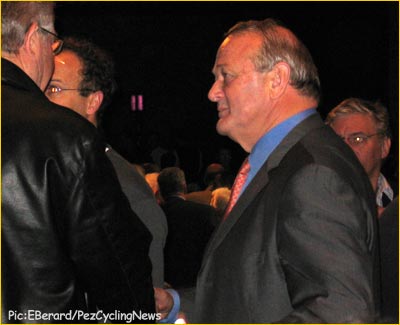 Jean-Marie Leblanc set a somber tone with his call to continue fighting doping.

Stage 2a – Presentation by Jean-Marie Le Blanc, Directeur du TDF
Jean-Marie Le Blanc continued Patrice Clerc’s sobering message. He called for respect for the anti-doping rules, calling on team doctors, managers, and riders not to dope. He even went so far into mentioning the 1998 Tour and his promise made back then to clean up the peloton.

Stage 2b – Presentation by Robert Grossman, President of the Urban Community of Strasbourg
Monsieur Grossman sang his region’s praises and gave thanks to Jean Marie Le Blanc for making good on his hand shake with Robert during Strasbourg’s last stage in 2001 to award his city a Grand Dйpart after 50 years. (The last start in Strasbourg was in 1953.) He showed a 5 minute movie about Strasbourg’s region’s history, economy, culture, and people, accented with planetarium-style music. 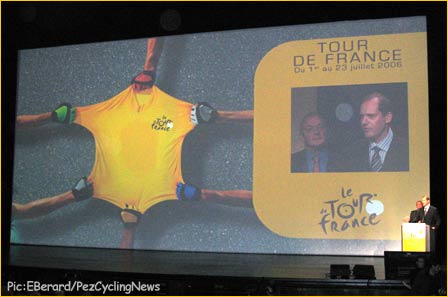 Stage 3 – Presentation of the TDF 2006 Route by Christian Prudhomme, Directeur Adjoint du TDF
Grab onto your seats as Monsieur Prudhomme treated us to an IMAX-like movie introduction of each Tour stage. We followed the yellow line through a virtual connect-the-dots: from 3D versions of the Strasbourg cathedral into Luxembourg, Belgium, The Netherlands, back into France to Normandy, then hopped a TDF plane to Bordeaux to swoop up and into the Pyrenйes, dip into Spain, up and out to Carcassonne, over and up to the Alps, winding around all 21 switchbacks of Alpe d’Huez, descending into smaller towns like Morzine before hopping a TDF train to Paris’ 3D Arc de Triomphe. 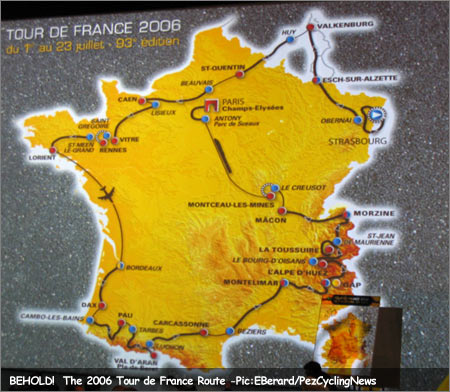 PEZ will be featuring our usual in-depth report on the 2006 route but here are the preview highlights: 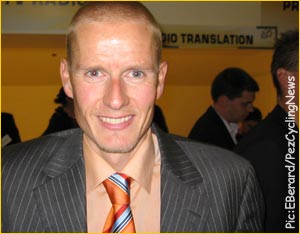 Rabo’s Michael Rasmussen looked stylish in his team issue cravate, but was less colored with the lack of mountains.

Stage 4 – Gourmet” Feed Zone: Kir Royales and Gummi Bears
No ASO event would be complete without cocktails and hors-d’oevres, how about kir royales and Haribo candies? We always like to please those sponsors. The riders and team management did not stick around but I did catch up with Michael Rasumussen again on his way out. His reaction to the route? Here is our quote of the day, spoken like a true Dane, “I could have made a better route. The mountain stages are few and far between. It takes a long time to get to the mountains.” 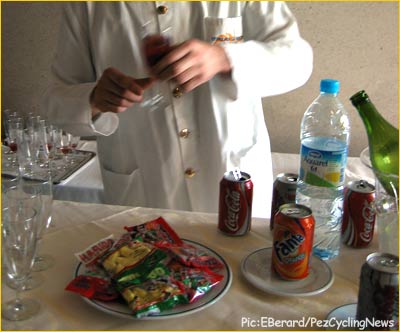 How can you have a big bike race in France without the national candy of cycling?

Stage 5 – Individual Time Trial – Contre-le-Montre Individuel – Writing the Story and Sending it to PEZ
I’m just finishing up my final individual time trial as I frantically type out the story that you are now reading…Sitting across from me in the cafй is Joe Tonon, pouring his over his press kit materials and Michelin atlas, mapping out his Destination Cycling trips for next year.

“I think this Tour route has the makings for a diverse set of exciting trips, especially with eight new stop-over cities and five countries. The route caters to cyclists of all levels and to those with different interests. Avid performance riders seeking to test their legs on the same hallowed roads as the Tour greats will get their chance with our version of L’Etape du Tour during each week. They will experience riding an entire stage just like the pros. Casual riders enjoying a mix of cycling and local culture will have fun discovering the wines of Alsace, chocolate of Belgium, the beaches of Biarritz, and the picturesque mountain village of Megиve. For the “cycling-challenged” at heart, our Tour de France Challenge takes you on the same exact journey, kilometer-per-kilometer, of the professional peloton, the day before. For more information, you can contact Joe Tonon directly at
[email protected]

See the Tour with your own eyes and legs: check out DestinationCycling.com

Au revoir from Paris. Hope you enjoyed this report. See you in Strasbourg…