It might not be the queen stage, but nothing means more to Tour fans than the race up Alpe d’Huez. In 1952 it became the first ever summit finish at le Tour, and has featured in 24 editions. If you see one stage of any Tour it has to be Alpe d’Huez – PEZ is there and takes a closer look at stage 15.

The skirmishes have been going on for days, starting with the TT in Rennes and followed by a brief flirtation in the Pyrenees. So far the racing hasn’t been decisive and the peloton and fans alike have been left wondering who will emerge as the Tours new leader. The suspense will be broken with a full frontal assault on the yellow yersey on Stage 15 at l’alpe d’Huez and finally ending at the col de Joux Plane on the Tours’ 17th Stage to Morzine. 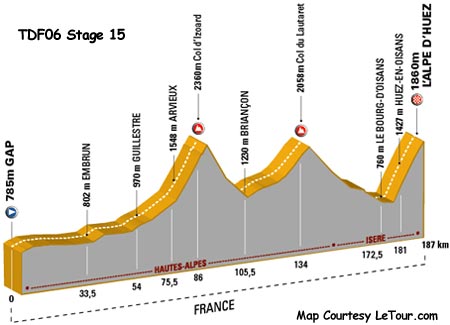 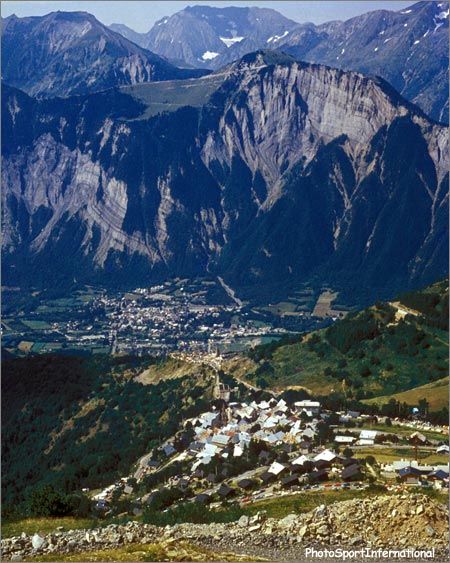 The view from near the top with village of Le Garde perched part way up the climb – that steep valley becomes a furnace by race time, making the steep lower slopes even more brutal.

Before the Tour got underway there had been an expectation that the two long TT’s would favor the chrono men over the grimpeurs. But when the last rider crossed the line in the Rennes TT one thing was evident – the GC probably won’t be decided against the clock. After scouting Stages 15,16 & 17 it became even clearer that this race is going to be won in the alpes. That isn’t to say that the two chronos aren’t important to winning the Tour. But whoever hopes to wear yellow into Paris better be able to climb.

The day starts with a climb over the Col d’Izoard – a big grunt but too early to be decisive on gc – watch for an ‘unknown’ break to have a go.

Leaving A Gap
Stage 15 gets underway as the race leaves Gap and heads on an uphill bias toward the Col d’Izoard. Best known for its semi-desert landscape, the climb can lay claim to having been used in both the Giro d’Italia as well as the Tour de France. The Col d’Izoard won’t likely be a factor in this year’s Tour – it’s the first of 11 climbs coming in the next three days, so the gc boys will likely save some jam for the blast up the Alpe. Look for a small group of non-gc guys to go for some glory, then get gobbled up before the finish. 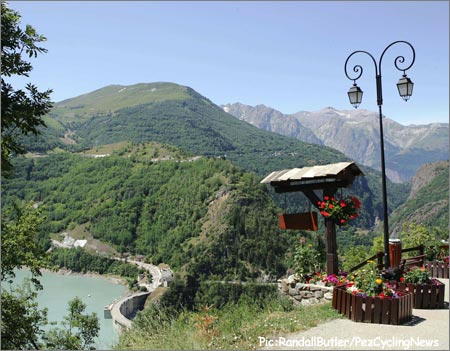 From the top of the Lauteret, it’s 40km downhill to the base of the Alpe.

Alpe d’Huez – The Stairway to Heaven
After the 15km descent of the col d’Izoard the course turns west and begins to wind its way up the col de Lautaret. Situated at the base of the col de Galibier, the Lautaret rambles along for 12km, often into a prevailing westerly headwind, reaching an altitude of just over 2000m. It tells you something about the size of the cols in this area when a 2000m climb barely gets a mention in the Tour roadbook! 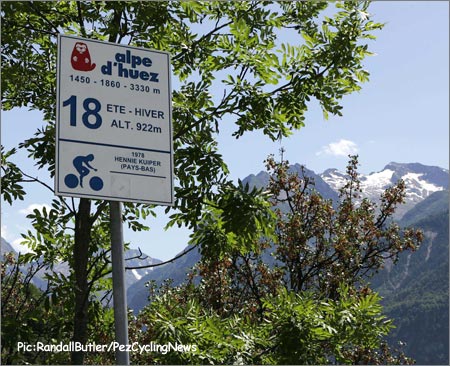 Each of the 21 switchbacks is numbered in descending order from the bottom.

The Year Of The Look
The main group will stay together over the Lautaret then begin a 40km descent to the base of the mighty alpe d’Huez. The race won’t reach the base of alpe d’Huez until about 4:30PM when the temperature can reach into the mid-30’s, the bubbling road tar isn’t the only thing that’s baked – and joining the Dutch, Belgian, Danish and German parties on the slopes makes for excellent race viewing – and plenty of cold ones.

Perhaps it is for this reason that the peloton has often remained intact in the early part of the climb preferring to only risk an attack closer to the finish. Lance Armstrong changed all that in the year of ‘The Look’, putting the hammer down on the lower slopes of the climb. Armstrong reinvented the climb that day, breaking it down into 21 sprints au bloc. Before he had reached the fifth switchback the Tour was over, his competitors bewildered by the Texan’s unorthodox and daring assault on the alpe. 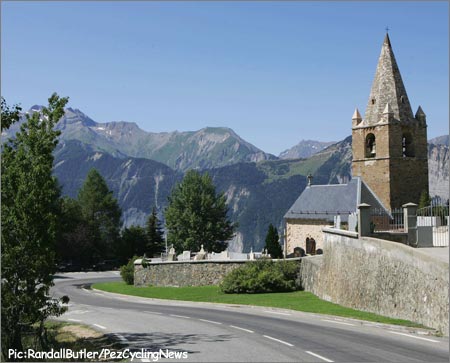 This normally serene alpine setting becomes the place to be if you’re Dutch on race day.

[Pez Note: When I rode this in 2003, I was stunned by the cacophony of craziness as I came upon the fabled Dutch corner. They had the biggest – and loudest sound system blasting euro-pop-disco, the passage was completely covered by hundreds of orange tee’d fans, and it was clear the bar had been open for several hours. The team buses were starting to arrive and the drivers were not pleased by the sprawl of fans, so most would simply lay on the horn and gun it – . Miraculously the fans parted like pigeons every time. I waited for an opening, fired up my video camera in one hand, and started pedalling my bike into the heaving mass, not sure what to expect but ready to record it on video. I rode slowly into the eye of the storm and soon had to stop because there were so many people. Then I heard another round of bus horns blaring, coming up fast behind me. The crowd was too thick to proceed and I had to put a foot down. Still shooting video with one hand, I was suddenly grabbed from the right and tugged to the side. A second later the Kelme bus (horn blaring at 11) thundered past my left shoulder – literally inches from my head. I turned to thank my Dutch savior, but he’d melted back into the throng – . The music never missed a beat, and I continued my way up the mountain.] 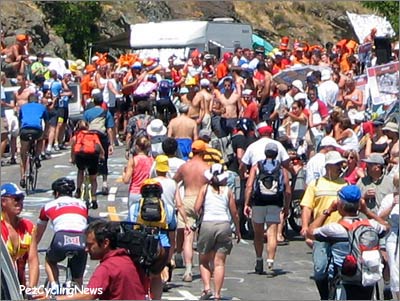 Going Around The Bend
As you leave the first ramps of the climb and wind your way up the next few virages, the road relaxes only slightly. You can count down the switchbacks, each one marked by a sign denoting a winner of the famous stage. Some of the switchbacks are longer, some shorter and each comes with its own gradient. You try to find a rhythm, a tempo where you can match your cadence to your breathing, hoping you don’t explode before the summit all the while leaving nothing on the road. 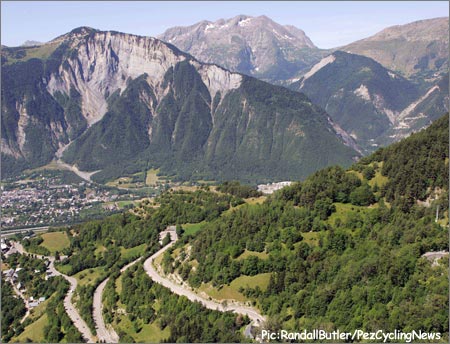 The steep valley around Bourg d’Oisans becomes a furnace by race time, making the steep lower slopes even more brutal.

The pitch flattens in the corners and you drop down a cog or two, seeking to gain precious seconds as you suck on your bidon, your breathing too labored to take more than a paltry sip as you seek to replace the constant fluid loss. You try to read the corners, looking for the flattest, shortest way through. As you round the virage it’s out of the saddle, accelerating back to tempo as the road rises again. The village of Bourg d’Oisans falls away below and the sweat stings your eyes as it drips steadily from the peak of your cap. As you gain elevation the mountain breeze sends a chill through your wet jersey, its zipper flapping in the wind. 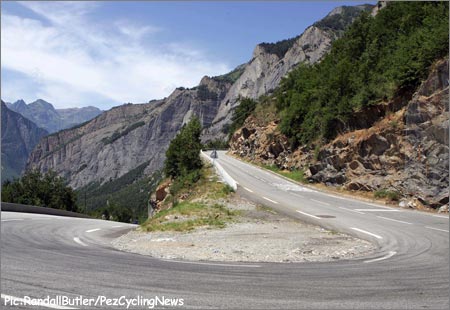 There is no shade and the heat begins to take its toll almost immediately. Known for its 21 switchbacks, the first few are amongst the hardest.

Allez Allez l’Alpe
The fans are thick on the alpe, having arrived as much as a week before the race to set up camp. Coming from the four corners of the globe, these are some of cycling’s most knowledgeable and passionate fans. The riders will be spurred along by the sheer pandemonium of the event – the screaming fans with their flags forming a narrow tunnel along the roadside, opening only as the team cars and motorcycles forge a pathway, their horns blaring above the din of the crowd. 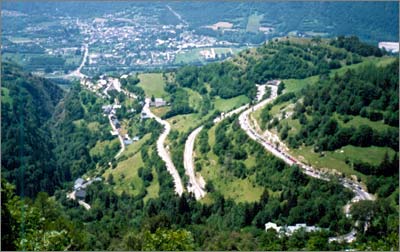 The crafty alpe shows you a few surprises as you approach the summit. Several switchbacks sharpen to over 10%. You fumble with your gears as you struggle to find your legs, recalling those TV images of the pros with their smooth and supple climbing cadence. The road reaches above the tree line and for the last few switchbacks confronts you with a powerful mountain headwind. You struggle, secretly wishing it was over.

After an hour you reach the village having only used the 23 and 26 cogs. But the course doesn’t end in the village, continuing cruelly on beyond the 13.8km’s listed in the roadbook. The podium looks out on la Meije glacier located across the valley and there you can dream while your body reels from the punishment. 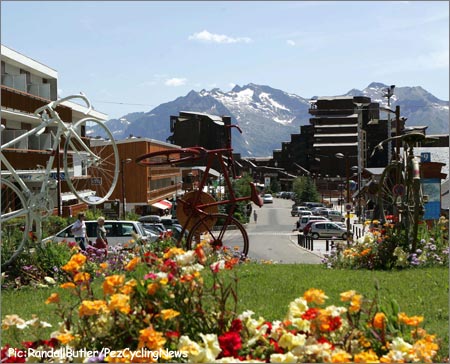 Up on top, the ski village of Alpe d’Huez awaits.

Will The Tour New Leader Please Stand Up?
It will be interesting to see how the favorites approach the race this year. Will the GC favorites shadow box their way up the alpe, looking warily over their shoulders until the final kms before the finish? Or will a new champion declare himself, throwing down the gauntlet early on the mountain in a bold attempt to claim the stage and a podium in Paris?

Coming off a rest day and with only one real climb preceding the alpe d’Huez the riders will be fairly fresh when they hit the climb. I don’t expect the time differences here to be large enough to spell an end to the Tour but for anyone on a bad day the race will be over. This is a critical day on the Tour and if history holds true it will prove to be one of the most dramatic and exciting.