This morning during the CNN Headline News Robin & Company morning show, sports anchor Will Selva interviewed U.S. cyclist George Hincapie about the recent doping scandal at the Tour de France. Here’s what George had to say…

WILL SELVA, CNN HEADLINE NEWS: Good morning, everyone. The Tour de France begins tomorrow, and cycling’s showcase event will have a decidedly different look. This is the first year in a long time that Lance Armstrong will not be a part of it. And now there is news that two of the favorites to win this year’s Tour will be absent. German Jan Ullrich and Italian Ivan Basso will not race after their names appeared in an anti-doping investigation in Spain.

It’s expected that 15 to 20 riders will be ejected before the day is out. This opens the door for other cyclists to win the race, perhaps American George Hincapie. He now joins us from France.

Good morning to you, George. 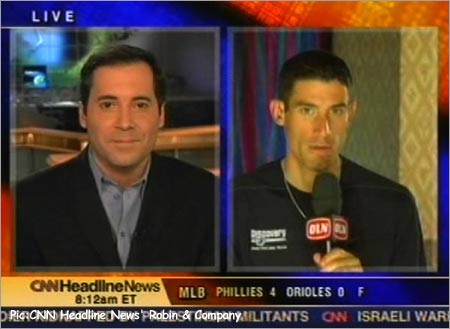 SELVA: Your coach says this is probably the biggest doping scandal in cycling, maybe even in sports, ever. I don’t know how much of this you know about, but how do you think something like this will affect this year’s Tour?

HINCAPIE: Yeah, I just got back from a bike ride and came straight here for the interview, so I don’t know much about it yet. I do know that several of the top favorites were suspended and obviously that’s a bad thing, a blow for the Tour de France. But it’s really not going to change my focus. I’ve trained very hard for this event and I feel like I’m better than ever, and I just want to stay focused on what I came here to do.

SELVA: Do you see a scenario, or can you envision the rest of the riders protesting and trying to stop the race?

HINCAPIE: No, I don’t think that’s going to happen. I think the Tour de France is such a big event, so many riders have worked so hard to come here, that we’re all here to race, and we’re all here to win stages and to try to be successful.

SELVA: All right, let’s move on. Of course, everybody’s wondering

— Lance Armstrong — I couldn’t let you go without asking you about him. What do you think life will be like without Armstrong there?

HINCAPIE: Well, it’s going to be different. I know that I — he’s a great friend of mine and I really miss training, preparing for him for this event. Every year we would train together before the Tour de France, and I missed that this year, and miss having him around. But also I have big goals, new opportunities for this Tour de France. I’m really excited about possible leading my team, and you know, I’m just going to stay focused on that.

Lance and I will chat over the phone and I’m sure he’s going to give me a ton of advice during the event. And we’re going to really miss him. But this is a new time for us, and it’s time for us to move on and focus on what we came here to do.

SELVA: All right, so we got the Lance Armstrong question out of the way.

How will your role change, from being a water carrier and pace setter, to now being a leader?

HINCAPIE: Definitely less work in the beginning of the race. What people don’t see, the fans don’t see on TV, is how hard we work in the first hour of every stage to control the race and to keep Lance in a good position. This year, fortunately, I won’t have to do that, and hopefully I can save as much energy as possible and really use it when the race gets hard, and time to use up and go for the wins, myself.

SELVA: Who do you see finishing on the podium?

HINCAPIE: Now, I think the Americans have got a great shot with Floyd Landis and Levi Leipheimer and myself. There’s always some surprises at the Tour de France, so it’s going to be a really exciting race, and hopefully you’ll see one of us on top.

SELVA: Yeah, definitely. Well, George Hincapie, thank you very much for joining us this morning. I know we threw a lot of things at you. Good luck to you, and hopefully we’ll be talking about you, perhaps maybe standing on that podium. We appreciate your time.

HINCAPIE: Thank you very much.

SELVA: George Hincapie, live for us there, in France.

Astana/Wurth: No START For YOU!