Note the title: “contender s”. The 2006 Tour de France has been touted as the most unpredictable since Lance Armstrong shot to fame in 1999. Far from being a two horse race, a number of thoroughbreds have a realistic chance, but who are these pretenders to the Texan’s throne.

If nothing else, the World Cup soccer/football/calico fans packing the bars and cafes of ‘le monde” should have plenty to debate after the day’s games come to an end – with the most wide-open Tour de France since 1999 just ahead, expectations at PEZ hq and our global bureaus are high for a closely fought, unpredictable, and exciting race. Say what you will about the parcours, it’s the riders who make the race, and with no clear pelotonic patron – and this being le Tour, your guess is as good as ours when it comes to picking winners.

Italians, Germans, Aussies, Americans, Spaniards – not since that classic ’60’s film “Magnificent Men In Their Flying Machines” have we seen such a mix of favorites, but what the hey – let’s give it a go a see who looks good…

Ivan Basso
This Italian’s name is on everyone’s lips. The 28 year old has blossomed under the tutelage of Bjarne Riis taking him from White jersey wannabe to Grand Tour winner. However, whilst the CSC rider’s pedigree is assured, is it possible to win two Grand Tours in the same year? Lance Armstrong thought not, Marco Pantani achieved the feat in ‘98 but under the cloud of a decimated field. Bjarne believes he can with his “strongest team ever” and Basso seems cautiously confident. In 2005 Basso lost an hour in the Giro as a result of a stomach bug. With his improved arsenal adding a blistering time trial capacity to his formidable climbing skills, the potential on paper is there. However, we all know that Grand Tour success is down to more than numbers. Despite this, with good health and good form Basso is a top tip. 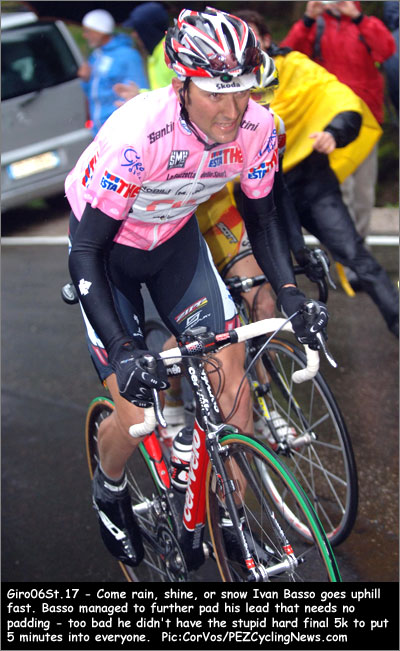 Jan Ullrich
More has been said about Jan Ullrich, his training, his diet and his waistline than most of the other contenders combined despite the fact that he barely turned a pedal in anger until May. Much was said of the former Tour winner’s late start to the season and the German’s approach certainly took the contemporary ‘less racing-more training’ approach to the extreme. The big question in many a pundit’s mind was whether his lack of racing kilometres would have dulled his top end speed. The former world TT champion answered these doubts with a resounding win in the Giro’s most significant race against the clock. One can never discount a rider with Ullrich’s class and palmares. As ever his up and down start to the season has cast a shadow over the team’s ambitions for Tour glory but you can always count on ‘der Kaiser’ to line up on the prologue ramp looking lean and raring to go. 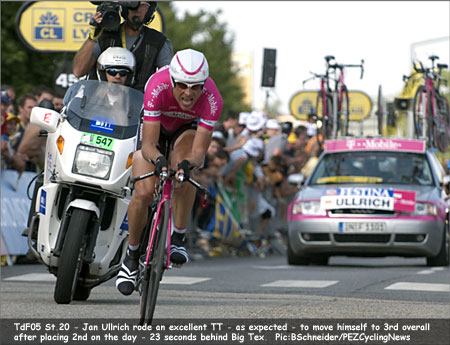 Cadel Evans
Cadel who? Cadel “former mountain biker, too much expectation too soon, Belgian team with not much support” Evans – that’s who. So why is he a contender? 8th place in the 2005 TdF, victory in the Tour of Romandie and a hardcore Aussie will that could see the 32 year old step up from nearly man to a Grand Tour podium. Evan’s victory in Romandie came courtesy of an impressive time trial win. Strength in the race of truth is key to GC success and with the Davitamon-Lotto rider’s proven climbing capability he could well have the recipe for success. However, his lack of tactical experience in the Tour and weak team better suited to the cobbles and winds of Belgium mean the he could well be isolated for much of the race in the mountains. Cadel is an outside bet but a chancer nonetheless. 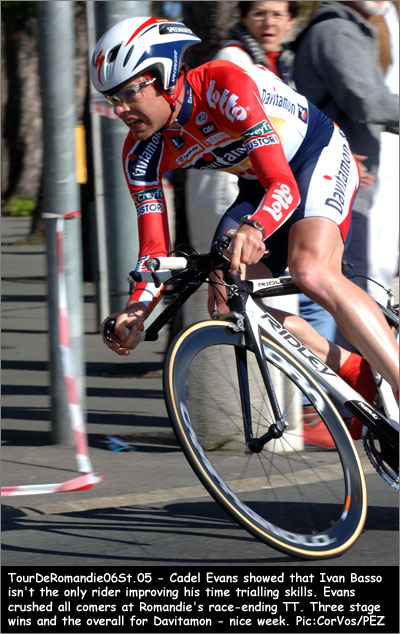 Floyd Landis
‘The Floyd’ has increased in strength progressively over the last few seasons, most significantly following his move from USPostal to Phonak. The likeable Californian’s spat with Lance Armstrong at the Tour de Georgia last year and a number of comments in l’Equipe set the pair on a collision course. Armstrong, who previously marked out the 30 year old as one of the most talented riders in his generation came head to head with his former protйgй in last year’s Tour. Whilst the Texan took his seventh crown, Landis finished 8th. However, now free from the shadow of the Texan Landis, sprang out of the pack taking victory in Paris-Nice and the Tours of California and Georgia. Sporting a retro looking ‘praying mantis’ style TT position the American’s speed against the clock has improved significantly. If the Phonak team brings their best game and Landis screws on his climbing legs to match his TT capabilities expect to see him on the podium. 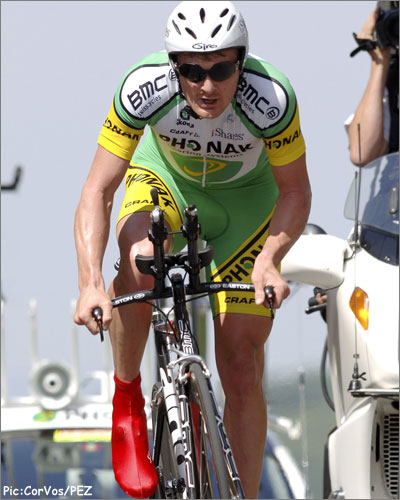 Floyd had the hot hot hot Spring, and he’s looking good for Summer.

Paolo Savoldelli
Bringing a wealth of Grand Tour experience, insane descending skills and an inimitable cool of Italian nonchalance, Paolo Savoldelli blossomed following his move to the Discovery team. Last year, the 33 year old took his second victory in the Giro d’Italia. Whilst he is not the best climber or time triallist of out contenders, he probably has the best tactical brain and bank of experience of any of these riders. What he loses on the long climbs, he inevitably regains with knife-edge descents and he rides for a team that is dedicated to overall victory beyond personal glory. Paolo’s lacklustre performance in the Giro this year was attributed to allergies and the team management are not publicly pinning their hopes on a single rider but should ‘the Falcon’ arrive in Strasbourg with all cylinders firing, Johan Bruyneel could see one of his riders mount the top step of the podium in Paris for the 8th time. Always cool, always collected, Paolo wastes no energy. Expect to see the Italian hovering in the leading group ready to exploit any weakness in his opponents should they demonstrate a tactical flaw or have a day of weakness. 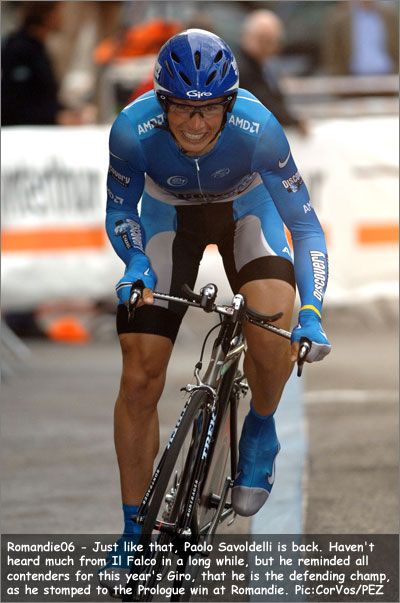 If he gets dropped on the climbs, Il Falco will get ’em on the descents.

Alejandro Valverde
Valverde could well be one of the revelations of 2006. The 26 year old is already a Spanish sensation taking a rare classics victory for his country and the first wins in single day classics for his Caisse d’Epargne team. His win in Liиge-Bastogne-Liиge elevated the young rider to superstar status and so began the Spanish press’ cries of “here comes the next Indurain”. Any Spanish rider in the last 10 years with a glimmer of grand tour potential has been saddled with this hope like a sword of damocles dooming all success to be branded a failure with the exception of victory in the French stage race; just look at Abraham Olano. Whilst Valverde’s extraordinary physical capacities and shear racing aggression can not be denied, could it be that the Spanish are trying to fit a square peg in a round hole? Valverde’s endurance and sprint make him a formidable classics contender but his time trialling is notably weak. This maybe a product of what Valverde himself admits is an unconventional training programme that eschews heart rate monitors and schedules in favour of an approach based upon ‘feeling’. This rider has class in bucket loads but he lacks experience, specific preparation and is yet to finish the Tour de France. Expect fireworks from this Latin star but even Valverde himself is ‘only’ hoping for a top seven finish. A realistic hope for the Spaniard. 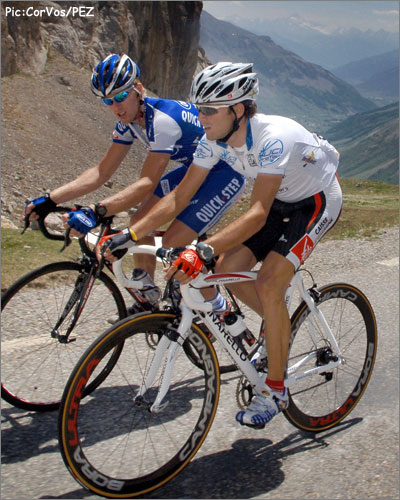 George Hincapie
I know you Statesiders love ‘big George’. He has progressively improved his GC position whilst riding in support of Lance Armstrong and last year’s race saw the New-Yorker show glimmers of promise with victory in a mountainous stage of the Tour. The rouleur caterpillar may be emerging from his chrysalis to fly to the top step of the podium in 2006. Hincapie has shown that he is strong in the time trials posting top tens in the race against the clock with metronymic consistency. He repeatedly wastes his tall frame for the month of July to improve his power to weight ratio and hold his own in the high mountains. He has a team with more experience than any when it comes to winning grand tours and whilst George may not be credited with the tactical nous of some of his peers he’ll have Bruyneel in his ear calling the shots. At the age of 32 he is reaching his athletic peak in terms of grand tour potential. Could this be the year to see the Indian become the chief? George and Paolo could well be the one-two punch that sees the Discovery team KO this race once again. 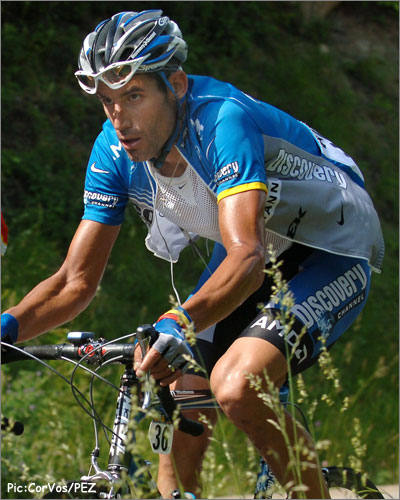 George has adjusted his training for a big run at le Tour… he’s gotta be the dark horse favorite.

Alexandre Vinokourov
The fate of the Astana-Wurth teams TDF ride seems to change with Jean-Marie’s underwear… so let’s assume they’re in (even though today they’re not)… ‘Vino’ is an unknown force in the field of GC contenders. Of five attempts at the Tour, the Kazakh rider’s best result came in 2003 with his third place, followed by fifth last year along with two stage wins. The major criticism of Alexandre’s swashbuckling riding style is that he wastes energy. His top five finishes belie the fact that whilst most GC hopefuls are spending their time hiding in the wheels conserving energy, it’s not uncommon to see Vino repeatedly attacking, chasing and generally antagonizing the lead group. The grass is often greener on the other side and since his move from T-Mobile, the mantle of leadership rests on his hardy Eastern Bloc shoulders for the first time. Will this temper his aggression so he may channel his powers into decisive moves to challenge for the GC? Also, the controversy surrounding the Liberty team must not be discounted. It is touch and go whether the renamed Astana-Wurth team will be granted a berth in the race. However it seems the Vinokourov is from the old mould of Kazakh tough guys. He’ll be raring to go come Saturday. Despite his weakness against the clock, if Vino rides an intelligent race we could well see him on the podium again; but the top step? Maybe not this year. 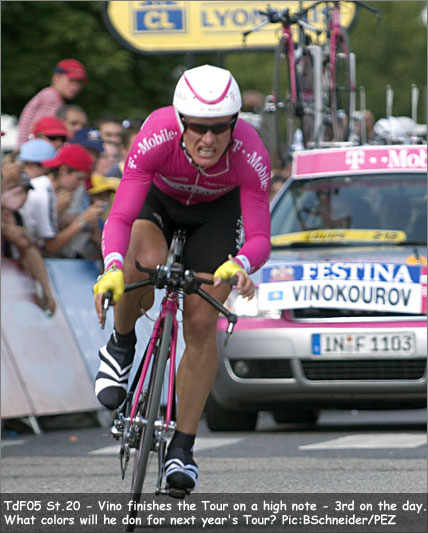 A fan favorite for sure, Vino’s done nada all season, and unless his team gets back into the race, he’ll be doing even less…

Yup – if there’s one thing we’ve learned over the years, this Tour de France is totally unpredictable… (okay, except for when Lance was racing) – but that’s why we love it so much – not for what it has been for the past few years (ie: pretty dull race with a foregone conclusion), but for what it could be – the greatest sporting spectacle on earth! Bring it on, baby, bring it on…