PEZ-man, Ed Hood, was involved in the ‘glamorous’ world of TV on Stage Two, but he’s not tearing up his notebook just yet! Ed lent a helping hand to the folks at Cycling.TV and ended up with quite an adventure.

Internet TV, it had to come along – the guys at Cycling.tv are right in the forefront, so far this season they have screened 70 days of racing over the ‘net. Not just classics, but big races that don’t take the big network’s fancy, but appeal to fans – the Grand Prix E3 being a good example.

With Le Tour being the epicentre of the cycling world for the month of July they had no choice but to cover it. Because of the astronomic ‘rights’ charges on Tour footage they can only screen around three minutes of actual action per day, but make-up for this by playing it smart and shooting extensive ‘behind the scenes’ and interview footage. 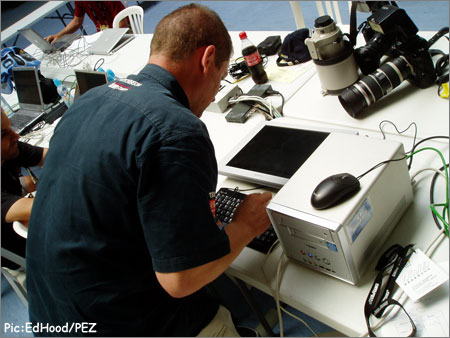 Steve Masters in the process of taking care of final edits on the day’s piece.

PEZ caught-up with them in press room at Strasbourg where our man Ed Hood was banging the keys, Cycling.TV’s Steve Masters was sat next to him doing final edits; Ed takes up the story.

‘Yeah, he seems like a nice guy,’ I thought as we exchanged cards, shook hands and parted.

Later that same evening, the cell phone rang and it was that Masters dude; ‘can I ask a big favour Ed? Could you run us to the start tomorrow and I’ll buy you breakfast?’ 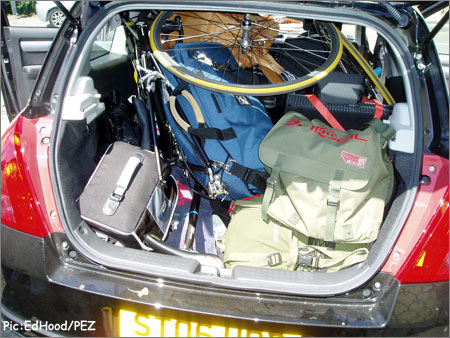 Methinks Suzukis were not designed for such work.

‘Fair enough”, I thought, and at 7.30 I was outside the Holiday Inn, thinking about bacon, eggs, hash browns, toast coffee . . .After we’ve loaded a dumpster’s-worth of gear into my Suzuki and had to dismantle my Giant to get it all in, Steve says; ‘Will we just get breakfast at the village?’ I nodded meekly and we set-off for Obernai with Steve prised in the back and camera-man, James jammed up-front with me.

Englishman, Steve (36, from Thatcham) was in the Royal Air Force until a year ago – fixing helicopters, now he’s on Le Tour, living his dreams, interviewing the best bike riders in the world.

On the way we decided that I would tag-along with them for the day, but stressed that coffee and food was numero uno on the agenda. I got good back-up from James on this one and at the village it was fresh fruit, scrambled eggs, bakery bread and coffee – jeez, that’s better. 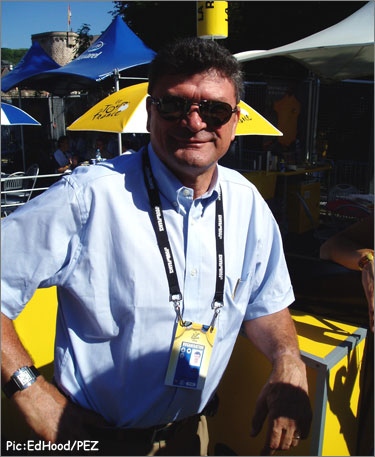 Bernard Thevenet made an appearance at the Village Depart. 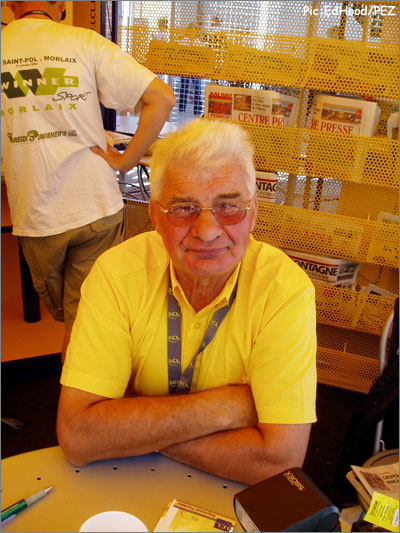 I’ve got this idea for a ‘Golden Oldies’ of the Tour gallery, I keep shooting the guys, but I don’t think Richard likes the idea – anyway, I got Pou-pou and Thevenet today. 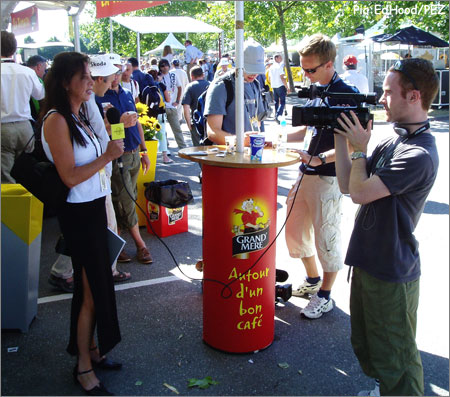 Christi Anderson became an impromptu Cycling.TV conspirator for the day.

Steve was off taking ‘local colour’ shots when I spotted Eurosport contributor Christi Anderson at the coffee bar and ambled over for a chat over coffee. Next thing, Steve has muscled-in and has her giving it; “Hi, this is Christi Anderson and you’re watching cycling dot TV.” That’s twice he’s suckered me today, – now I see how they can give the big networks a run for their euros. 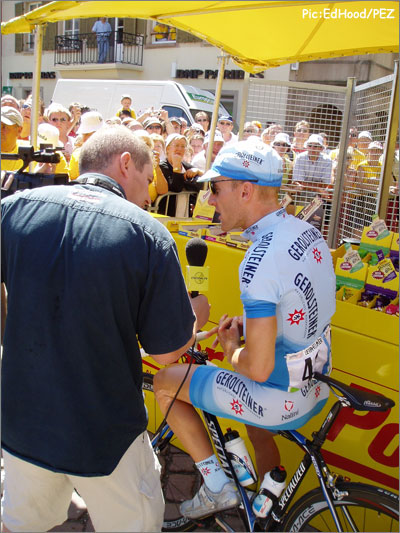 Levi Leipheimer had a few moments for Steve and Cycling.TV before the start of the stage.

It’s nearly signing-on time, so it’s up the start and the chaos that accompanies it, we can’t move on the side walks and have to jump the fence and walk up alongside the publicity caravan. 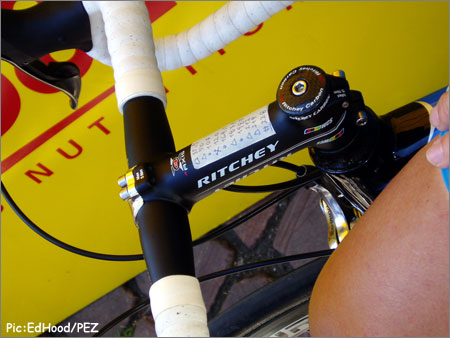 Kudos to Levi for being prepared for the stage ahead with some little obstacle reminders. Here’s a question though: how’s he supposed to know where he is in the stage without a computer?

First guy to sign-on was Milram’s Erik Zabel, he had plenty of local support, the border with his native Germany isn’t far a way. He was on a pair of ‘Lightweight’ wheels, that’s 3,000 euros-worth of his own cash, Milram run Shimano Dura Ace wheels and ‘Lightweight’ don’t do freebies. 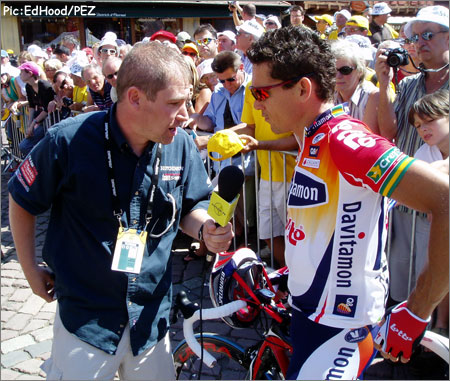 Robbie Mac always has something interesting to say.

Steve and James were soon in action, grabbing interviews with Robbie McEwen, Levi Leipheimer, Chris Horner and Bradley Wiggins. McEwen was at pains to emphasise the dangers at yesterday’s finish, Hushovd’s chute being down to bad race security in his book.

I got thrown-out of the signing-on enclosure, it’s only meant to be photographers and camera men in there, never mind – I just lurked around the entrance.

I got a minute or two with Bradley; he’s an easy guy to interview.

PEZ: “How was the first stage for you Brad?”

Brad: ‘Straightforward, it wasn’t a hard day, I had to ride in the wind early for Jimmy (Cofidis team mate and first stage-winner, Casper) and go back for bottles for him, but apart from that it wasn’t a difficult day, although the last 5 k. was pretty dangerous. Our goal for the stage was for Jimmy to win, so it was a great stage for us.’

PEZ: “Did you have to work in train for him?”

Brad: ‘Jimmy doesn’t work like that, you just take him to near the finish and let him into the wheels, he’s a duck and dive kind of a sprinter and doesn’t like coming-off a train.’ 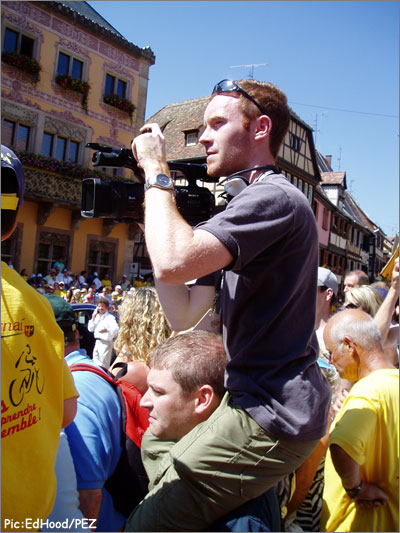 Sometimes you need a little boost to get the job done.

Steve wanted to film the roll-out, so James was hoisted on to Steve’s shoulders with PEZ providing the lumbar-support; it’s amazing what these guys do for a shot.

Once the show was on the road, it was back to the Suzuki, and 200 kilometres to Esch-ur-Alzette, with Steve navigating, he’s good, we didn’t get lost once. On the way the boss called from cycling TV, ‘we can’t shoot any race footage’, so all those gymnastics were for nothing.

Like they say; ‘another press room, another town,’ where James had to edit, all that work could mean as little as a couple of minutes on the air. Give me a pencil and a notebook any day!

• Tune in to Cycling.Tv for a full dose of behind the scenes Tour action.