Tomorrow, in just 52 kilometres the current Tour de France overall standings will be turned on their head. The time trial from the Rennes suburb of Saint Gregoire – which loops out into the country before returning to the City itself, marks the end of the ‘phoney war’.

Hushovd, Boonen, McEwen and the rest of the kamikaze-brigade have given us some good skirmishing, but the real big guns fire for the first time tomorrow. So far the overall contenders have been intent on doing only one thing – keeping out of trouble; Valverde didn’t manage that trick and he’s gone. 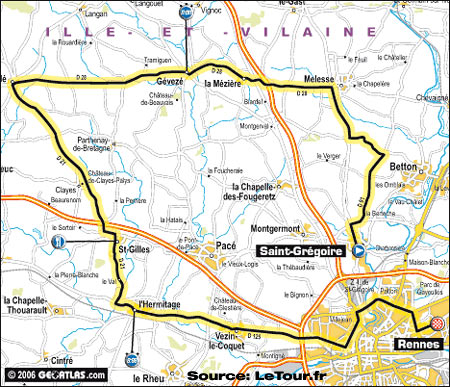 The big TT: 52km from Rennes to St. Gregoire – hold on to your GC Hats!

The other ‘chrono-men’ (and just plain ‘strong-men’) – Landis, Zabriskie, Julich, Evans, Rogers, Leipheimer and Hincapie must perform, for reasons of immediate morale and ultimate overall ambition.

PEZ took to the tarmac to review the full course for you.

Start Your Engines
The test starts in an industrial area just off the Rennes ring-road, the clutch of roundabouts could be dangerous if wet. There’s a little fast, flat tarmac then a 90 degree right after one kilometre onto the D 91 road which is a secondary road, but with a reasonable surface. 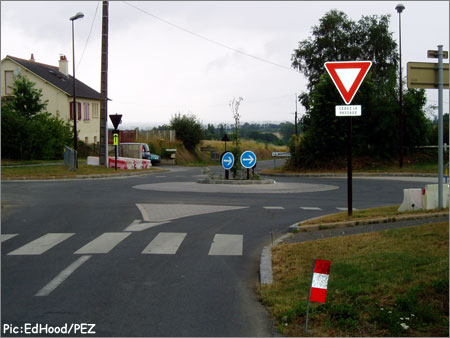 To the right or left? Ah hell, straight on through the middle.

It drags-up immediately from the junction, snaking as it does so through fields of wheat and maize. At five kilometres there’s a 90 left and more drags on the narrow D 27. There’s no settling-in, to be up-there at the end the work-rate has to be there from the start. 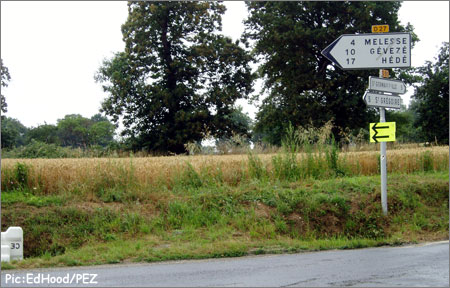 Riders will hit the town of Melesse early on in the TT.

The drags continue once the course takes a 90 right on to the D 82 at 6.5 km – wider and smoother but still rising. At top of the drag to the village of Melesse (9.0 km.) there’s a 90 left onto the D 28 which keeps going up and westwards, to peak where it crosses the N 137 dual carriageway. 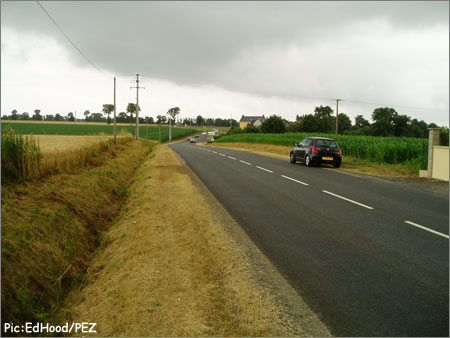 The countryside near Rennes is perfect for a Saturday bike ride.

Town Time
Immediately after is the village of La Meziere (12.5 km.) where it twists and turns through mini-roundabouts and over speed bumps, it’s not mega-technical but at this level a smooth passage through could make a crucial difference. The course then drops and twists a little to the village of Geveze (16.5 km.) it snakes and drags up through the village into an open landscape of maize and wheat fields.

It’s after this point that the big-gear guys can do the damage if it’s their day, long drag follows long drag and the Floyds and Davie Zees, who can just turn-up the pain, will do big damage on these heart-breaking straights. 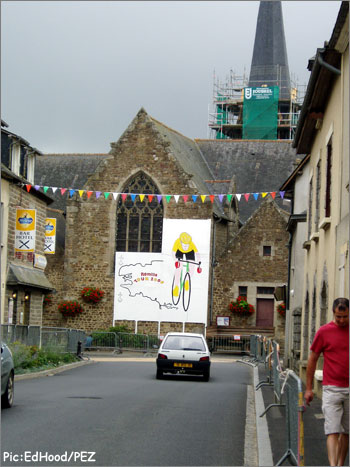 If the riders look up long enough, they’ll see a nice church right in front of them in Romille before turning back for home.

At the village of Romille (23.0 km.) there are twists and turns again before the 90 left which leads the riders south, downhill and out of town. Again it rolls, nothing technical, just the road lifting gently towards the horizon. 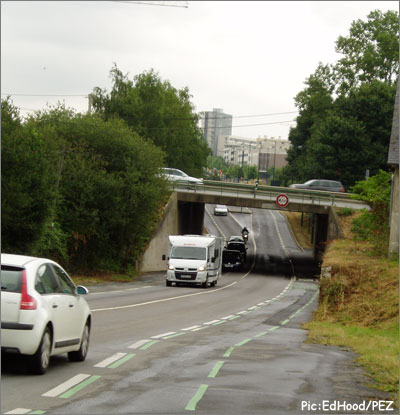 There’s a fast section under the N 12 motorway just before the village of Saint. Giles (33.0 km.), where the course lifts through the streets, but there is nothing too technical to break the flow. 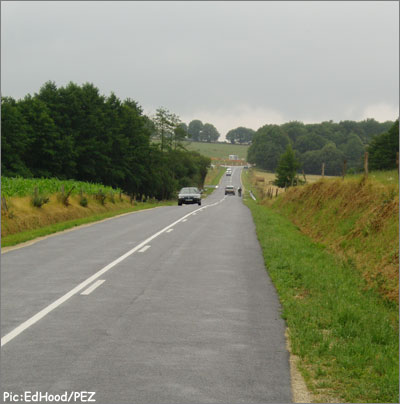 There should be some smokin fast times over the 52k course tomorrow – something close to 60 minutes?

The Home Stretch
It drops out of Saint Gilles before dragging back up to the village of L’Hermitage (36.5 km.) where again it’s not too dangerous and then back into the pattern of gently snaking and rolling; direction now is east – heading for home. The small town of Vezin-le-Coquet (40.5 km.) has a sticky lift through the main street followed by one last rural section before the race becomes a boulevard-blast through the streets of Rennes for the last eight or nine kilometres.

This fan got the pick of the spots – if you get there two days in front of a time trial, chances are, you’ll find yourself a grand spot.

Once in Rennes there are no real difficult corners and the course looks fast as it heads around the tree-lined dual carriageways of the inner-ring road, again the 55 x 11 guys will carve-out big chunks of time here. The last section is downhill through the ‘projects’ with one final 90 left into the leafy finishing straight. Surfaces are predominantly good, but there are ‘choppy’ sections in the villages and if it rains after so much heat, then any tight bend has to be given respect.

Prediction?
Davie Zee from Floyd – but not by a street, and a surprise from one David Millar.