How much more drama can a bunch of cycling freaks handle? From the dismissals before the start of the Tour, to the rise, fall, and rise again of Floyd Landis in the high mountains, it’s almost too much to take! Today’s flat run to Macon left the Alps behind, and was the last chance for sprinters’ glory…

We here at Pez HQ have our heads on a swivel. How much more drama can a bunch of cycling freaks handle? From the drama of the dismissals before the start of the Tour, to the return of Floyd Landis in the high mountains from a whopping eight minute deficit, it’s almost too much to take! With this being the last day before the penultimate time trial on Saturday, Macon would prove to be the final finish line before Paris to get a stage win for the sprinters.

The first brave souls to snap the elastic and sojourn off the front were David Millar (Saunier Duval), Yaroslav Popovych (Discovery) and Benoit Vaugrenard (FDJ). The lead hovered for a bit around 30 seconds, and eventually Vaugrenard dropped off the pace and left the Disco and Saunier Duval riders to their own devices. This proved somewhat fruitful as the duo stretched out to 1:20! Good to see Millar having a go, certainly in light of the current climate regarding doping in the peloton. But alas the two were caught shortly after the first sprint point and it was all together once again. 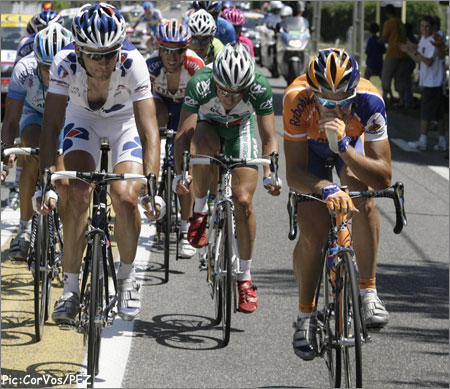 It took some work, but eventually a group of 15 was allowed to ride away, and it was not coming back.

With the closest threat on the GC being Leipheimer at 22-plus minutes, this combination would be to the peloton’s liking and be allowed to go away. And so they did, anchoring into a fine lead of roughly 4 minutes, and there it stayed. One wouldn’t think anyone of any importance would light the touch paper today, as with tomorrow’s big ITT, it wouldn’t behoove anyone to try to break any legs, there was simply too much to risk. 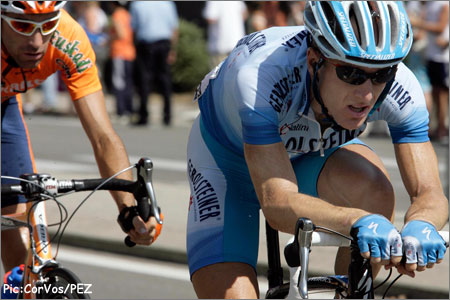 Levi Leipheimer got himself into the break in hopes of salvaging perhaps a stage win, but alas, he ended up playing the closer, as his teammate Ronny Scholz went up the road.

Around 50k to go, Isasi jumped off the front, and several others tried in ones to get across with Levi Leipheimer being the only one to do so. The duo immediately went to work and gained an advantage of about 25 seconds and the group pegged them there. But the lead slipped to 15 seconds to the chase, and by 20k, the last rites were given and the two were swept up. 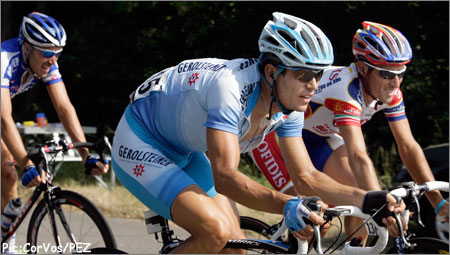 Three riders: Moreni, Tosatto, and Scholz got away late with Tosatto making the big sprint for the win.

Quinziato made the move to bridge up to the leading three while the others started snaking across the road looking at one another, but his efforts were in vain as the leaders worked well together to get things done. Scholz jumped off the front of the group (from the front?!?) to no avail. One would have to figure that Tosatto would be the man, but as the trio cruised under the 1k kite, it could have been anyone’s game. Behind, just frustration, especially for the valiant Leipheimer, shut out again after a tough effort. 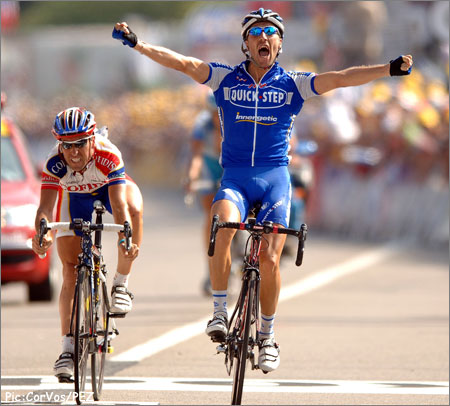 Matteo Tosatto managed something that the indomitable Tom Boonen couldn’t do this year: win a stage of the Tour de France.

And indeed, as the line approached, the other two couldn’t hang, and Tosatto screamed ahead of them for a glorious stage win. Celebrating with his arms outstretched, Boonen’s lead-out man clearly enjoyed the moment.

So tomorrow, it’s all on the line as Floyd Landis will make his last attempt at the 30-second gap between himself and the yellow jersey of Oscar Pereiro. Let the Time Trial fireworks begin!