Another day, another slog across northern France – but like every other flat stage this one packed a nail-biting finish. Robbie McEwen’s win was surprising not because he made it three today, but because never showed his face until it mattered…

Stage 6 – Friday, July 7 – Lisieux-Vitrй, 189 km
The Tour de France spends its last day in relative tranquility on the flat roads before tomorrow’s ITT and next week’s looming mountains arrive, both sure to shake up the General Classification. After a little rain this morning, the Tour shoved off on another flat day, with but one Cat. 3 climb along the way, and the usual 3 sprint points. Most oddsmakers would think that names like Boonen, McEwen, Hushovd, and Freire might be factoring into the finish today. 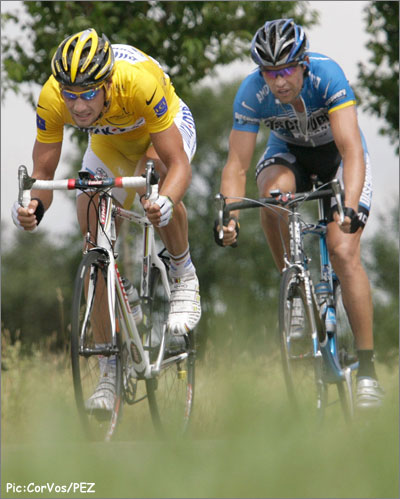 What do you do when you’re in the Yellow Jersey, you’re bored, and you’re ridiculously strong? You attack. Boonen, perhaps frustrated by the first week, went out and brought the pain to some breakmates for a little while.

A few combinations tried to jump off the front early, but the group seemed reluctant to let anyone get clear, no matter how insignificant on GC they might be. Then, perhaps in a moment of mass inattention, a quirky break went off early that contained Boonen and Hushovd, and PEZ-man Maggy Backstedt, but of course the bunch said “no way no how” and jumped after them. In the subterfuge of that large breakaway, Florent Brard (Caisse d’Epargne), Anthony Geslin (Bouygues) and Magnus (Liquigas) slipped off the front and worked hard to forge a lead of just over 4 minutes, with around 90km to go. 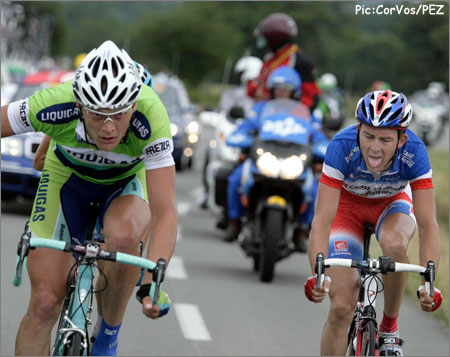 The break rode tough today – they only had about 3 minutes with over 50k to go, but still managed to hold out into the waning moments of the stage.

This author is finding it difficult to make different words liven up the story you just know is to ensue. The sprinters’ teams moved to the front at the precise mathematical time in order to reel in the escapees and so it was. Though the three break mates made it tough, as they sold themselves out for the better of the break, but the seconds ticked off the break, and they held a mere 19 seconds inside of 10km. The peloton lunched on the inevitable diet of breakaway snacks for sure, but only after the three dangled off the front for an exceptionally long time – 50 meters… 40 meters… 30 meters… Finally at 3.5 km to go they were swept up. 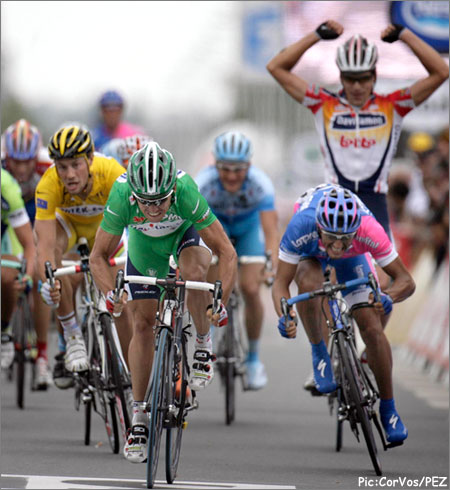 Gert Steegmans took the sprint from 400 to 200 and Robbie launched from there winning by 2.5 miles.

Lampre (for Bennatti) and Quick Step (for Boonen) lined up on the front and the two headed peloton screamed into Vitre. Two became one as Lampre lead k’s 3 and 2, with 3 Quick Steps tucked in, Boonen in tow. At 1.5 k’s, Freire moved up with one Rabo pulling him. McEwen, typically, could not be seen. And then Steegmans moved over, and there was the pint-sized Aussie, jumping through like lightning. Boonen messed it up and let himself get boxed in, and everyone else, spread across the line, was shown a clean pair of wheels, those of Robbie McEwen…he’s on fire!

Tomorrow’s ITT will show the heads of state of this Tour de France, and the fireworks are sure to be in full force, so keep it dialed to PEZ… 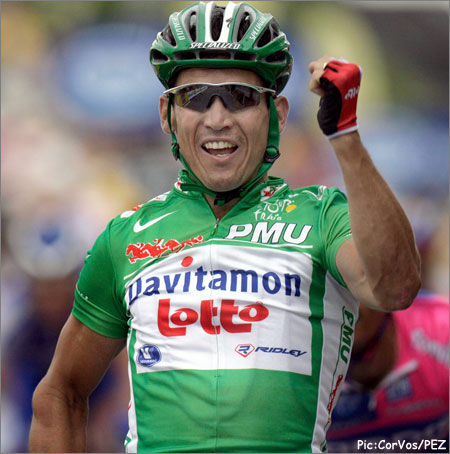 McEwen is getting into the swing of winning, as he went off and started doing his best running man post-win.

PEZ MailBag: The Sack Spilleth Over!