Welcome once again to the Pez Juggernaut of Tour ’06 coverage! Today’s stage is a bit of a twist: it’s a one-day classic wrapped inside a grand tour with a gooey center of near 100 degree temps. Whew. In fact, it was 99 degrees, and the asphalt temperature was a whopping 122 degrees. Who wants to race in this crap? Up the Cauberg? Are you kidding me? Well, it turned out 5 guys wanted to race very badly in this.

After a flurry of one-sie two-sie attacks, none of which stuck, the quintet of Jens Voigt (CSC), Jose Luis Arrieta (AG2R), Unai Etxebarria (Euskaltel), Jerome Pineau (Bouygues), and Christophe Laurent (Agritubel) got away, under the impetus of Voigt, who launched the attack and coincidentally is best placed on GC, sitting in 47th at 36 seconds. 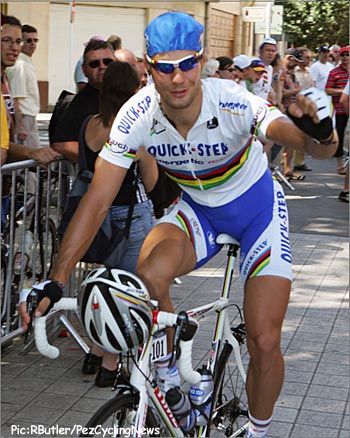 Tommy B. signals his intentions for the day.

The move came early, with over 180km left to race, and as Credit Agricole kept vigil over the peloton, the erstwhile escapees rode up a healthy advantage of almost 5 minutes.

The break worked well today save for the brief fireworks on the Cфte de Petit-Rechain, where Jerome Pineau earned enough points to cover himself in polka dots tomorrow. 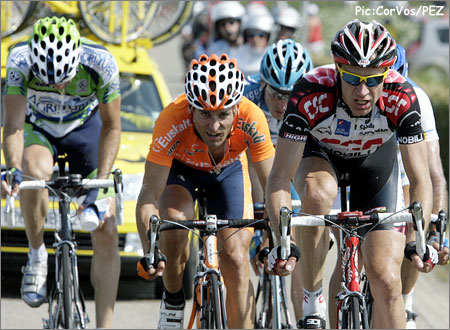 Five riders were up to the task of riding really hard for a really long time today.

The stage was also marked by the typical first week crashes. Early on, American Fred Rodriguez went down with the stalwart Dutchman Erik Dekker. Both were forced to abandon. Later in the race, Alejandro Valverde’s brief inattention earned him an early exit from the ’06 Tour after a massive pileup resulted in a broken collarbone for the Spanish conquistador. It hurts to lose as exciting a rider as Valverde – but as they say in Nascar: “that’s racin'”. 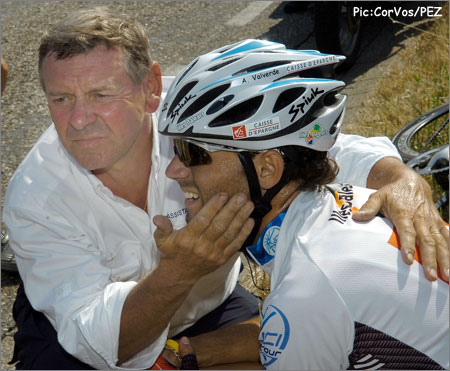 Alejandro Valverde’s hopes for a huge Tour came to a dismal end, as his collarbone went crunch towards the end of the stage.

Back to the break: with around 15km to go, Jose Luis Arrieta (AG2R) made some muffins out of the cornmeal his breakaway companions left behind with some failed attacks. Arrieta squirreled away and laid down the hammer, building a fine advantage of 50 seconds on his way to the vaunted Cauberg. Which race am I writing about? Liege Bastogne Liege? Amstel Gold? These roads look familiar…

Now with a minute lead and roughly 10k to go, Arrieta was head-down and teeth gritted as his original breakway mates were swallowed up by the speeding peloton, driven on by multiple teams.

Arrieta went under the 4km banner, with now only 34 seconds in his jersey pocket. Valiant, certainly, but looking rather doomed at this juncture. The big teams fired all ordinance in the effort to bring the Spaniard back. 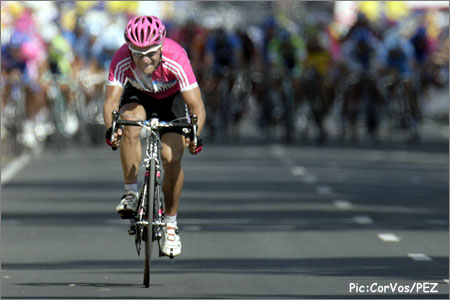 Kessler’s powerful move on the Cauberg was unstoppable.

As the peloton zoomed to the base of the Cauberg and up to Arrieta’s rear wheel, Credit Agricole sent a rider out first to test the water. Then Boogerd and Boonen were in the top 5, along with the likes of Oscar Friere right there as the Cauberg gnashed her teeth and bit hard on tired legs. And then hard man (and yesterday, hard luck) Matthias Kessler jumped. The same T-Mobile rider put everything he had into the move, trying to pry himself from the grasp of the peloton.

At the top of the Cauberg, he had a fair advantage once more, and pressed on. And the Gerrman made it stick this time, nipping across the line and celebrating jubilantly, just as the group had him in their sights. Perhaps the T-Mobile rider was spurred on to get his team some positive news in light of the Operation Puerto fallout. And Aussie Michael Rogers (who looks to have some bad press of his own recently) took second, to make it a magenta 1-2. 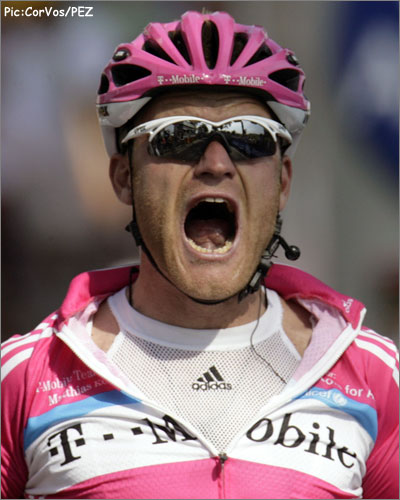 Show us your happy face!

With the field having some fractures as they crossed the line, due in part to both earlier crashes and this god awful heat, Tom Boonen found his way to the yellow jersey.

The GC likes of Hincapie, Savoldelli, Landis and others played it safe – avoiding trouble and just trying to get to Saturday’s TT when the real racing starts.