By Jered Gruber On Jul 5, 2006
Share
Like PEZ? Why not subscribe to our weekly newsletter to receive updates and reminders on what's cool in road cycling?

Another hot, long stage for the 172 starters today heading from Huy, Belgium back into France for a finish in northern France in St. Quentin. Two easy climbs early on and then it’s all flat for a guaranteed bunch kick. McEwen, Boonen, Hushovd, Zabel, Freire, Bennati, and any other thrill seekers will be looking for stage glory and a chance at getting the Maillot Jaune from Boonen.

Today’s stage started once again during the heat of the day without the presence of three riders: Alejandro Valverde, Erik Dekker, and Freddie Rodriguez. All met their doom in yesterday’s run in to Valkenburg. The early break must have been feeling a little sleepy, as they delayed a few minutes before heading out to do the deed. The break lovers waited a whole 25 km before wresting themselves free from the grasp of the field. 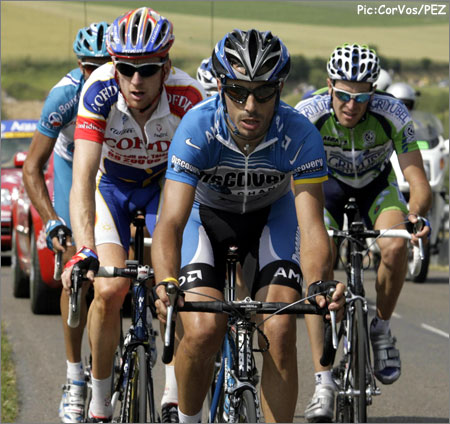 The five-man break enjoyed a long day out front, and some sore legs this evening.

So there it was, the script had been followed and now all that was left was a little leash for le break, hard work from the break, tempo from the Yellow Jersey’s team, and later ridiculously high speeds from all interested in a bunch kick.

Egoi Martinez’ Jump Up GC
Of interest, up in the break, Discovery’s Egoi Martinez took all of the time bonus sprints leap-frogging all the way up to 5th overall on GC. It would be interesting to know exactly the motives behind that, because there has to be a reason – money, team classification, better starting position in the upcoming TT?

60k into the race, the break had a controlled 4 minutes over the field, and the climbs were done for the day; leaving only a long, long flat run-in to St. Quentin of about 140km.

And so it went, the break riding hard, the field gradually picking up steam until we pick up the story for the business end of the race, inside 10k to go. 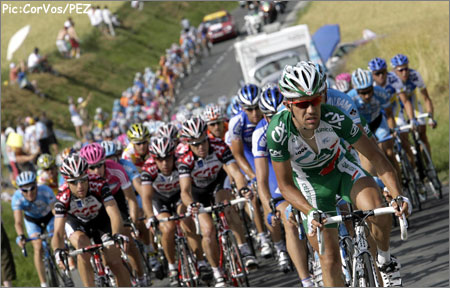 There’s not too much hope for a break when multiple teams decide they want a sprint.

The Business End Of The Race
Iban Mayo went down for the second time in two days around the 10k mark, but found his way back to the field without too much ado, but Mayo will want to try and stop falling down if he plans on going fast uphill in a week’s time.

The break seemed to really get some gas at the end anchored heavily by Lefevere and Martinez who seemed to get stronger as the race got closer to home, but there was no holding back the field which was boiling up from behind less than a minute in arrears.

There’s No Way, But Maybe?
Inside 4k to go the gap was only 18 seconds, but Lefevre and Martinez, who had dispatched their other companions a few km back, were raging, and suddenly questions began to be asked: is it possible? No, surely not, but seriously, is it possible?

Ete’s Sorry Luck
2k to go and the duo of Martinez/Lefevre met their demise after 180 km of race leading work, and now it was all the fury of hell from the front of the bunch heading to the line.

Poor Erik Zabel had horrible luck as he flatted his rear Lightweight inside 2k to go, giving him 0 points on the stage and probably taking him out of the running for the Maillot Vert – remember Robbie McEwen’s relegation last year? That day of 0 points cost him the jersey in Paris. 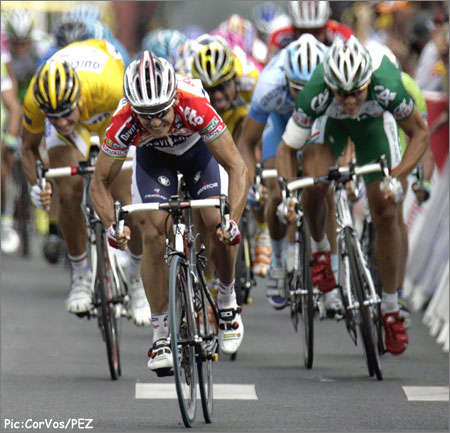 There was some serious daylight between McEwen and the rest.

Say Good-Bye To Robbie McEwen
Inside the last kilometer the field was terribly disorganized, and Tom Boonen was well back around 10th wheel, but he hooked up with a teammate and began charging forward. A left-bend inside the final 300 meters and a Credit Agricole rider goes down right in the middle of the road, and miraculously he was the only one, poor Julian Dean. At about this moment, Robbie McEwen hit hard through the turn and opened up enough of a gap to build a subdivision.

The view from above showed close to 10 bike lengths with Tom Boonen making chase in hopes of a fading Robbie Mac. The only rider that faded though was Boonen and he was caught be 3 riders on the line: Galvez, Freire, and Hushovd. 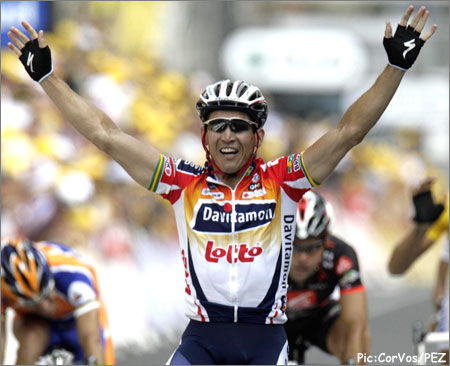 That’s two for McEwen – the only thing left now is making it to Paris in Green.

That’s two for Robbie McEwen – on the slightly uphill finish in St. Quentin there was no one within a few days of the explosive little man from Australia.

Tom Boonen did hold onto his Yellow Jersey, Pineau still holds the Dots (which Rasmussen stares at with great longing in his loins), and Robbie McEwen got his Green back.