Another flat stage? Come hither ye mountains! If you had bet that a climber would win today’s stage then I have some bad news for you…Before you go and sell your bike and give your helmet and clothes away though, read on – who knows?? Rasmussen and Mayo may be battling it out down the almost 2km long finishing straight in Dax today, stranger things have happened…

Favourites for the day would have to be ‘it’s cool to be green’ McEwen, World Champion Boonen and of course last year’s Maillot Vert, Hushovd. In any mass sprint in the Tour though, there could be some surprises and you can never discount Zabel, or previous stage winners this year, Jimmy Casper or Oscar Freire. The flattest stage of the Tour 06 by far and also the second shortest road stage at 169.5kms, this stage was always earmarked to be a sprinter’s victory.

As always though, someone in the 170 man strong peloton wanted to chase their moment of glory and today’s three escapees were Walter Beneteau (Bouygues), Stephane Auge (Cofidis) and Christian Knees (Milram). These three brave boys bid ‘au revoir’ to the peloton at the 8km mark and their gap quickly grew to a maximum interval of 7m56s. After T-Mobile controlled the pack for the first 70kms it was time for the sprinters’ teams to come to the front and bring the break back home to the comforting confines of the peloton. 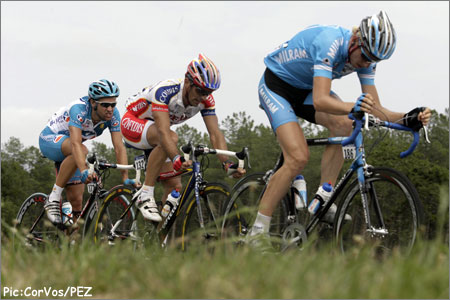 The three-up break worked well and hard until the final 30 minutes, and then the strongest man in the break, Knees, tried to rid himself of his companions, only to ruin the break in the end.

Today it was Credit Agricole that put their hand up first for the work, with high confidence placed in Thor Hushovd. Before the start Hushovd chatted with French television, relaxed and confident that it would end in a sprint and that he would be ‘up there’. It’s the kind of finish that is made for the big strong sprinters like Hushovd and Boonen, not so much McEwen’s style today though with an almost 2km long finishing straight.

Today’s finish would have been tailor made for the big man himself, Mario Cipollini, ex-World Champion and sprinting superstar who has joined the race today inside the Liquigas car. Now that he is retired and has no way of frustrating the French on the bike, he has found a way of doing it off the bike – by waving the Italian flag at all the French supporters and reminding them exactly who won the World Cup on Sunday night! What a guy… 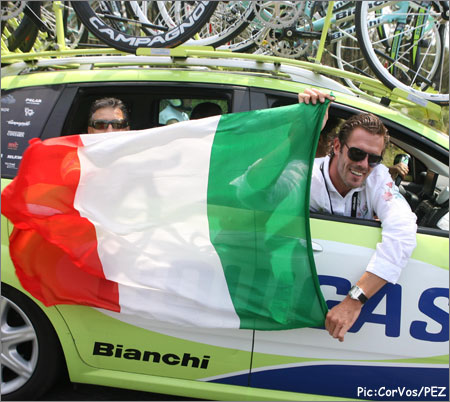 Mario Cipollini just can’t help himself. He can’t sit in the team car all day and do nothing, can he? Ah, but he can poke countless jabs at the French to his great enjoyment whilst waving the Italian flag around all day and reminding everyone who cares to glance his way just who won the World Cup – and who didn’t.

The breakaway of three riders is slowly brought back down to a 3minute gap with 30kms to go, thanks to the work from Credit Agricole, Quick.Step and Lampre. Christian Knees (Milram) is doing most of the work in the break, but the two Frenchmen are also helping out as much as possible. Knees is certainly the least experienced in the break, this being his first Tour, with Auge in his 4th Tour and Beneteau riding his 7th.

It was the young German, Knees though who attacked the breakaway first, with 16kms to go when their lead dropped below 2 minutes over the charging peloton. Knees couldn’t get away from the two Frenchmen and his attack did little except break up the rhythm of the break. It was the last thing the break needed at the time as the peloton is chasing at maximum speed, being led by all the sprinter’s teams.

Knees attacked the break again at 7kms to go when they only had a 30second lead, but it was all in vain as the break was caught at 3.7kms to the finish and it was time for the sprinters to have their day! 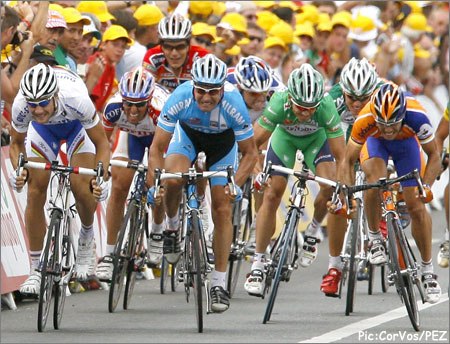 Note where Robbie McEwen is inside the final 100m – he’s on Oscar’s right side and a full bike length back – and just like that, he cut left and just about took Freire on the line.

An action packed finale led to Oscar Friere narrowly beating an absolutely flying McEwen by less than a wheel length in a lunge to the finish. Rounding out the top five were Zabel, a clearly disappointed Boonen and Cristian Moreni (Cofidis). McEwen was seemingly out of the sprint with only meters to go, but somehow managed to squeeze out of his rolling enclosure of lunging sprinters and exploded toward Freire just narrowly missing the win on the line. McEwen went so very very fast when he managed to get out from behind the wall of the ‘lesser’ sprinters. 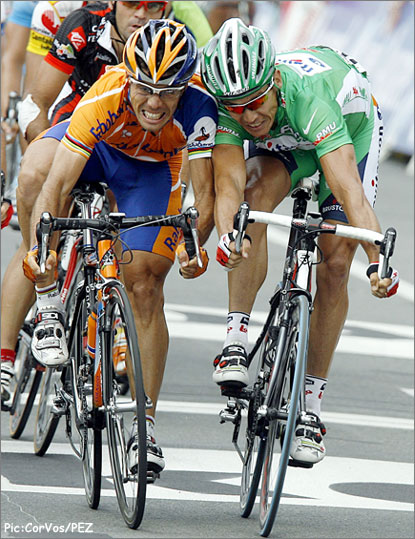 Robbie McEwen had no opening inside 100m to go, somehow made an abrupt left in the middle of the sprint, and exploded into the open and ALMOST got Oscarito on the line.

The only thing to note for the G.C men today was the time loss of almost 2 minutes by Levi Leipheimer after being dropped in the final 10kms. Clearly Levi’s chase for the yellow jersey is over for this year and we’ll have to see how he survives the big mountains tomorrow where all the real action will begin. Levi wouldn’t give any excuses for his dismal TT on Stage 7, but it’s apparent that something is very wrong with Mr. Leipheimer – hopefully he can miraculously recover in the hours before the first mountains hit.

It is in the high mountains of the Pyrenees that we will see who are the contenders and who are the pretenders to Lance’s empty throne. Will Landis keep the American fire burning at Le Tour, or will we see a new nation take the title? Tune in to PEZ tomorrow to find out what goes down!