The mountains have finally arrived, albeit today was just a tiny appetizer of the joy still to come. Will any big names show their hands on this ‘easy’ stage? How will the first mountains of Le Tour affect the General Classification? Let’s find out…

Just over 190kms & 3 mountains awaited the 169 riders at the start line today, but with 42kms from the summit of the final climb until the finish line in Pau, not too many time gaps were expected amongst the favourites. This stage was always going to be a ‘leg tester’ though, with the change of rhythm from the fast, flat days of the opening 9 days to the narrow steep climbs of the Pyrenees. Nicolas Portal (Caisse d’Epargne) summed up his thoughts of the stage, “The first stage of the high mountains will hurt bad.” 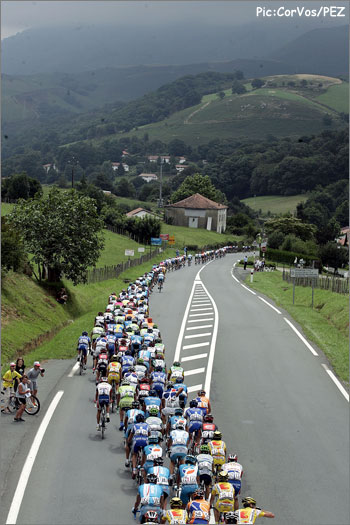 The field suffered through a tough day – tomorrow will be much, much worse.

Before the peloton made it to the first climb of the day though there was some very difficult twisting, undulating roads and the peloton was strung out and they were all, ‘hurting bad’. The first 40kms of the race was ridden at an incredible pace until finally a break established itself that most of the teams were happy with. The break quickly gained a gap that raced up to 10min and it was Cyrill Dessel (AG2R) and Juan-Miguel Mercado (Agritubel) who led the break over the first HC category climb of the 06 Tour.

Dessel was the best placed rider in the break at 3m50s down on the yellow jersey of Gonchar (T-Mobile) and he was looking very comfortable in the break which was down to only 7 riders after the first 2 climbs : Dessel (AG2R), Mercado (Agritubel), Vasseur (Quickstep), Moreni (Cofidis), Rinero (Saunier Duval) and Isasi and Landaluze (both Euskatel). 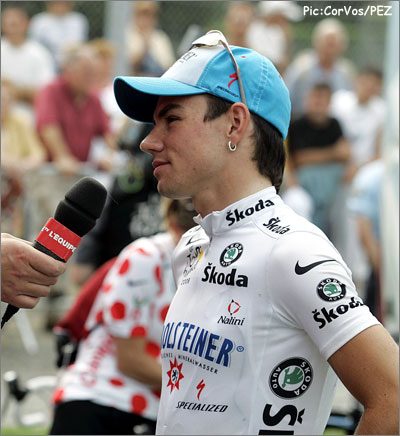 How about young Markus Fothen? He dropped some GC places today due to the break, but looks poised for something good the next two weeks.

So the Euskaltel boys were looking good at the front of the race, but their team leader Iban Mayo, was in major trouble at the back, dropped from the peloton very early on the climb. Mayo’s hopes for a podium finish in Paris have gone and yet another favourite bites the dust! All the other favourites rode comfortably over the HC category climb of the Col de Soudet though, with Hincapie and Landis looking particularly strong, sharing a joke together at the summit.

The joking and laughing was finished by the last climb of the day though, the 1st category Col de Marie-Blanque, with the pace accelerating in the main field and putting the yellow jersey of Gonchar in difficulty. Also in trouble were Leipheimer (Gerolsteiner) and Cunego (Lampre) both being dropped in the final kms of the climb. They were later to make their way back on the descent, but things don’t look good for either of those two for tomorrow’s harder stage.

Back at the front of the race, Dessel (AG2R) was on a great day, taking maximum points over the climbs and moving into 1st place in the KOM competition. After the last climb of the day, it was once again Dessel and Mercado getting away together and they worked very hard to stay away from the remains of the break. 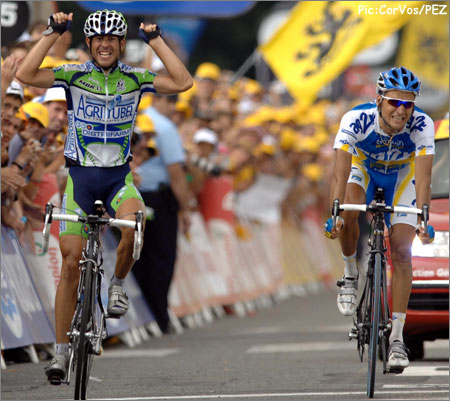 Mercado took the win, but Dessel couldn’t be too peeved – he was heading for Yellow.

Mercado was looking for the stage win and Dessel was hoping to become the next yellow jersey wearer. At the 10km to go mark, Mercado stopped working and Dessel had to do all the work to try and get the maximum time gap for his yellow jersey chances.

In the end, a fresher Mercado outsprinted Dessel to take the stage victory with Dessel getting more than enough time to take the Yellow Jersey.

Landaluze led the rest of the break in and then Lampre’s sprinter, Bennati brought the remains of the peloton home 7m23s behind. 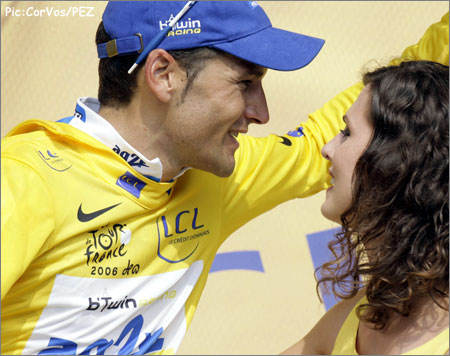 Pop quiz: Who and when did a Frenchman last wear the Maillot Jaune?

Overall another great day for the French with Cyril Dessel taking the yellow jersey after an impressive 150km breakaway. It was a relatively quiet day for the main favourites but that will all change tomorrow with 5 categorised climbs and a finish at altitude, the leaderboard is sure to explode. As always, stay tuned to PEZ for the action!