Whooo doggie! It was another HOT one in the Tour de France today, in both temperature and racing! Floyd Landis in yellow? Oscar Freire in a breakaway? Yaro Popovych with him? Asphalt temps of 122 degrees Fahrenheit? Attacks from kilometer 2? The Tour begins to take real shape after a small dose of the mountains, but today could have gone either way. Would a break survive? Are the sprinters’ teams too tired to chase a break? Read on and find out.

Today there was blood in the water, as several large and somewhat odd breakaways went away in the early going. Boonen and McEwen were in a group of 14 to start, but that one didn’t last. Then “Hard Luck” George Hincapie got in the next move of ten with the likes of Jens Voigt (Team CSC), Giuseppe Guerini (T-Mobile), Michael Rasmussen (Rabobank), Damiano Cunego and Daniele Bennati (Lampre-Fondital), Oscar Pereiro (Caisse d’Epargne-Illes Balears), Cristian Moreni (Cofidis), David Millar (Saunier Duval) and Michael Albasini (Liquigas) and they plowed up one of the early climbs. The group splintered a bit at the summit of the early climb, but all was together by the bottom on the other side. 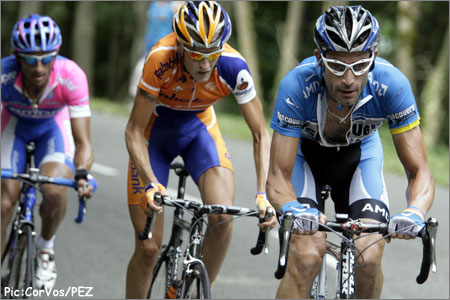 At least George Hincapie is not sitting in the field sulking about his ruined GC chances – looks like the field will be chasing him around for the rest of the Tour.

Then 15 riders went away, again with Hincapie and most of the previous break’s players involved. This one etched out about a minute’s lead and kept plugging away. Good for Discovery to have a guy like Hincapie at the front as back in the bunch, its riders were putting foot to pavement. Savoldelli, injured after falling while running into a spectator yesterday and getting his melon cut open and subsequently stitched up, abandoned; as did Benjamin Noval. After roughly 70 kms out front this break, too, was doomed. And in its death, a new break was formed. This one of four riders – Yaroslav Popovych (Discovery) – best placed on GC at 9’00), Oscar Freire (Rabobank), Alessandro Ballan (Lampre), and Christophe Le Mevel (CA). These four put the hammer down and cooked up a lead of up to over 4 minutes! 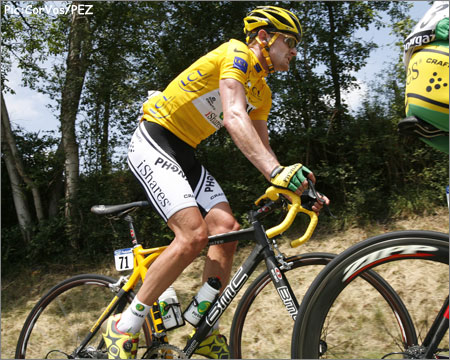 Looks like Floyd got himself a new bike with appropriately colored bar tape.

Meanwhile, back at the ranch…er…we mean back in the bunch, Floyd Landis kept his yellow jersey nice and dry under the escort of his Phonak teammates. The yellow and green team kept a steady tempo and provided Landis a wonderful view of the front of the bunch, but they were clearly not attempting to reel the break in, even though Popovych would make some serious gains in GC if he was to stay away. 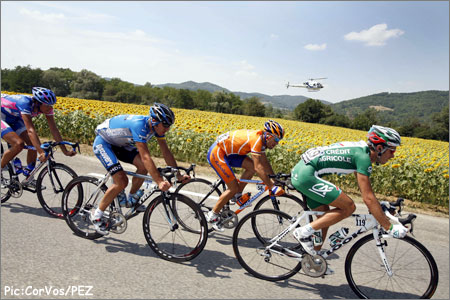 It took a LOT of work to get the successful break off to the races, but once it went, there was nary a doubt.

And with the sprinters teams a little bit tired after all the sprinting early on and the atrocities of the mountains the last two days, it was all but certain that the break would indeed stay away. It wasn’t a picnic for the rest of the bunch though, as the crosswinds took their toll and sent some tired riders out the back. Simoni included. 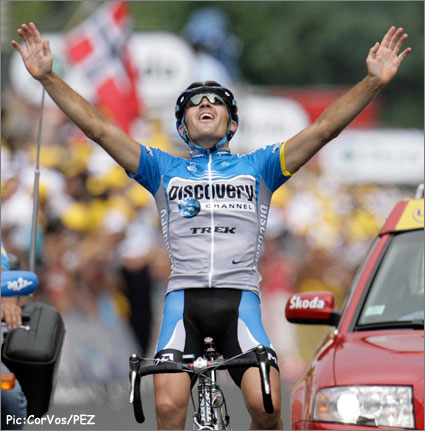 Lost some time on GC in the Pyrenees? Why not just head up the road and steal 4:45 back and hop back into contention.

As the break passed under the ten k kite, with 4:27 in hand, one had to like Freire’s chances. One would figure the break would try to launch someone up the road, rather than tow the three-time World Champion to the line. So, at 7k Popovych jumped the group and due to the vicious nature of his attack, he forged a bit of a lead. In the chase back to get him, Le Mevel was shelled. The other three looked at one another a bit, and then Freire jumped. He’s reeled in. 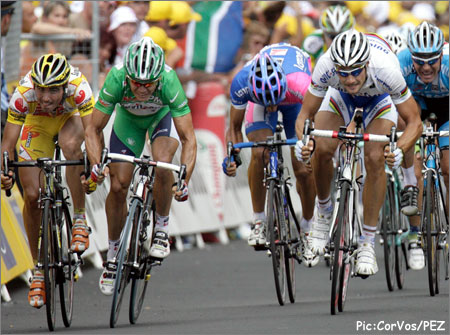 Back in the field there were still a good chunk of points on the line, and FINALLY it was Tom Boonen’s day to get the better of Robbie McEwen – too bad it wasn’t for the win.

Popo jumped again but was reeled in again. After some more tea party, he jumped again!!!! I suppose Bruyneel was in back egging him on. Another Popo attack, and again Ballan was left to do the reeling on his own. This 4th attack by Popovych looked better than his first 3, and he managed to forge a few seconds and hold them at 2k. Popo, crossing himself three times before raising his arms and smiling wide in victory, proved that bar fighting tactics can indeed work in cycling: keep throwing punches until you land the knockout blow.