Bit of a strange day today, Bйziers to Montйlimar, 230 kilometers of undulating roads with five 4th Category climbs and a hard day tomorrow, but with a Rest Day the day after, then the race should really begin in the Alps. So today a group should get away.

True to form on one of these transition stages a group of lowly placed riders are allowed their freedom and after three and a half hours racing and 100 kilometers to the finish the group have twenty minutes lead. The group of five hopefuls is Andriy Grivko (Milram), Oscar Pereiro (Caisse d’Esarge-Illes Ballears), Jens Voigt (CSC) and Manuel Quinziato (Liquigas). The break had gone away after 23 kilometers with Arnaud Coyot (Cofidis), but he decided it was too long and too hot (40єC) for a ride with the lads and went back to the easy riding bunch policed by Phonak.

The five were riding well together sharing out the mountains and the intermediate sprints, Pereiro is the best placed rider at the front over 28 minutes down, at this rate he could be in Yellow tonight as with 60 kilometers to Montйlimar they have just over 25 minutes in hand.

As we meander through some of the biggest vineyards in the world, nothing much is happening, going back for drinks etc. this is the first time the tour has come to Montйlimar and this part of the l’Ardйche is very stunning with the Gorge and rocky outcrops, lots to look at, except bike racing. 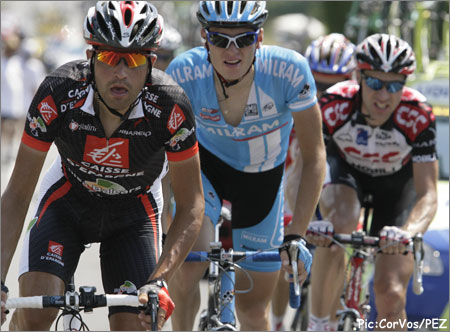 Mush boys, mush! The peloton is two and a half weeks behind and walking their bikes. Why do people attack so much? Because every once in awhile you get away in a break that gains 30 minutes on the field and suddenly you’re in the Maillot Jaune.

Phonak are still on the front as the gap goes up to 27 minutes (20 kilometers behind) with 35 kms to go, two climbs still to go over, the Cфte de Villeneuve-de-berg and first the Cфte de Saint-Maurice d’libie, lots of fan out on the route, but still not much action, Quinziato (Liquigas) has time to wave to the crowd. 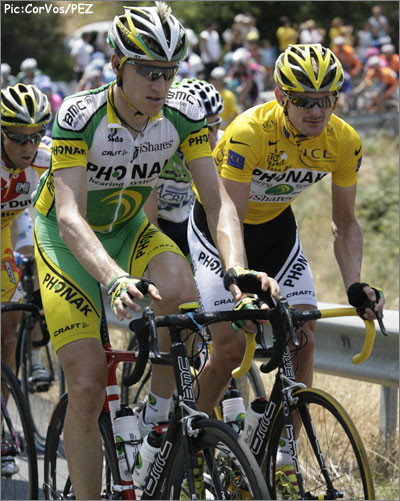 Floyd to Axel: Yeah, I’m pretty tired of everyone taking pictures of me and asking questions, let’s give the break a couple of days and worry about Yellow later. Cool?

The gap gets to 28 minutes and Phonak start to chase, Pereiro may not be in Yellow tonight, but he’ll be mighty close. Of the five Voigt is looking tired (bluffing), Chavenel, Grivko and Pereiro are cool, Grivko is looking very keen, jumping for the little climb, Quinziato chases as the others get up and Grivko is dropped for his cheeky actions. Twenty three kilometers downhill to Montelimar these four will be battling it out, Grivko has shot his bolt and will be wishing he hadn’t gone for the mountain prize, at least he’ll get fifth!

Should be a good sprint for 6th with McEwen, Freire and Boonen all looking for points as they are all within 28 points in the Green Jersey competition.

Chavanel has had enough and attacks, gets a nice gap, but it comes to nothing as Quinziato pulls him back first and then Voigt and Pereiro, this didn’t achieve anything except to annoy Voigt. The five are a bit ragged now as they are all looking at each other to see who will make the next move in the last 5 kilometers.

Pereiro and Voigt want to get rid of the other two and jump away together, Chavanel and Quinziato don’t seem to have anything left for the chase and they are losing the race, the two riders in black, white and red are off and going for the stage win, Voigt goes for a long one but Pereiro pulls him back and it’s together side by side, Voigt still has some left and takes the stage by a wheel length and its eyes down for the bunch gallop. 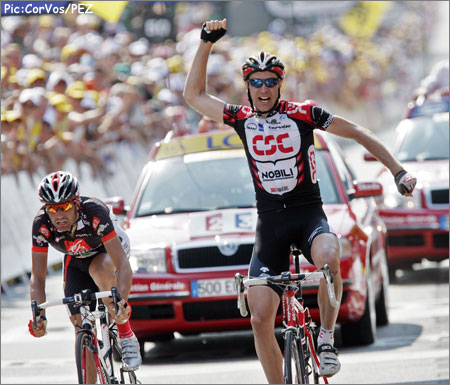 Pereiro is asked about the day: “This is one of the most beautiful days of my career, I didn’t get the stage but I will move up overall, I’m thankful that my team let me give it a go today.” Chavenel said he was surprised to get such a big advantage, it was hard and he will keep trying like he did a few years ago. Voigt was pleased with his win, as he said he had a bad start to the season, tomorrow he is going to have an unofficial rest day, Voigt won a similar stage in 2001 into Serran. 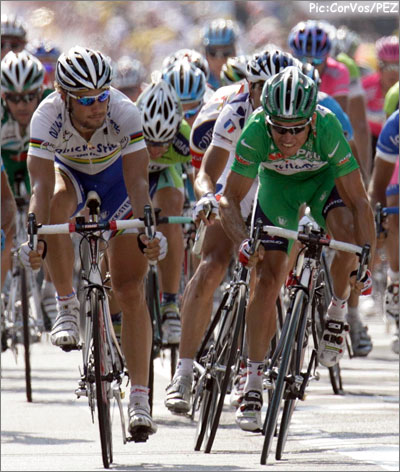 Boonen: Dammit Robbie McEwen, I hate you, you’re really screwing up my confidence.

Time to go and make a cup of tea and a sandwich before the peloton come in, Rabobank have taken over the lead work for Freire, but they give up and its back to Phonak for the work. At the finish line Oscar Pereiro is looking nervous as the bunch are not riding too hard and he could be in Yellow after all, he and his manager (and Spanish TV) are hanging around just in case. His manager is pleased with how the day has gone even if they don’t get Yellow, to have a rider close to overall lead is good anyway, especially considering the most unfortunate abandonment of big time favorite Alejandro Valverde in the first week.

Lampre are leading the bunch then Quick-Step take over for Boonen, also Eisel and McEwen are there, Freire? Nowhere. Boonen is the first to jump, McEwen and Eisel come round him and Robbie does it again, De La Cruz and Coyot are close. Oscar Pereiro is in Yellow and should hold it until Tuesday although it is a hard day tomorrow with some big climbs to Gap. 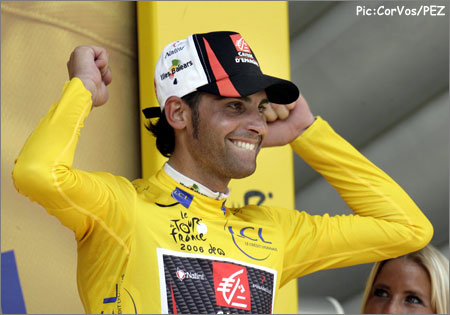 I bet if you told Oscar Pereiro this morning, that he’d be in Yellow at the end of the day he’d have called you a raging nutter.

This is all so interesting, remember that Oscar Pereiro finished in the Top 10 on GC last year – Pereiro can go uphill in very quick fashion under the right circumstances. He still stands nary a chance to the onslaught behind, but he just might have got himself another General Classification Top 10.