In one stretch of mountain road the compete order of the Tour de France was shaken, stirred, guzzled and spewed today as total anarchy ruled the slopes of the climb to la Toussuire. EVERYONE attacked, Floyd cracked, and there were more ‘Bams’ today than Barney Rubble’s son and Emeril combined. This is racing at its finest!

Early Action
A hard start to the day, Bourg d’Oisans and BANG! Attacks start right away, Christope Moreau (Ag2r) is the man they are all swearing at on the foothills of the massive Col du Galibier (2646m), this kicks off a group with Valjavec (Lampre), Rasmussen (Rabobank) Casar (FdJ), but no Moreau! Behind, Phonak are not really chasing, just keeping a good tempo, a few riders are trying to cross over; Rubiera (Discovery), Merchante (Saunier Duval), Commesso & Bruseghin (Lampre), Astarloza (Ag2r), Garcia Acosta (Caisse d’Epargne), Verdugo (Euskaltel) and Lefevre (Bougues), trying to get over to them was Simoni (Saunier Duval), Popovych (Discovery), Sinkewitz (T-Mobile), Parra (Cofidis) and Arroyo (Caisse d’Espargne), but not getting there in any hurry.

Up the Galibier Rasmussen is the man in the hot seat as he wants more mountain points and possibly to slip the leash for an epic stage, anyway the “Chicken” looks good, interesting to note he only has one bottle cage on his Colnago, Valjavec is the highest placed overall rider in the break is at over 12 minutes behind Landis, so no worries yet! 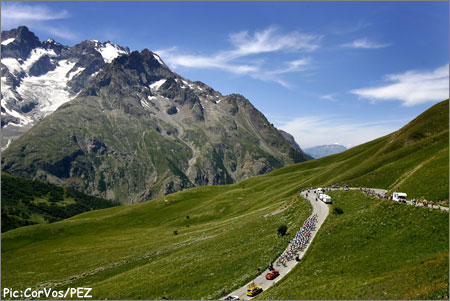 The climbing started early today and didn’t stop – proving too much for more than a few riders, and one notable man in Yellow.

At the top of the Galibier there are no trees, just bleak, hard country-side, all we have for shade are campervans and spectators, Casar is leading the front group as the chase group and main bunch are stretched out with the effort, Rasmussen takes the points at the top and the Desgrange prize of 5,000 euros for the highest climb of the Tour. The chasers were at 3 minutes and the main peloton was at 4 minutes 40 behind and Landis has no team-mate with him, but they will get back up to him on the descent, a long, long descent to the valley floor before they start the climb of the Col de la Croix de Fer (2067) which we can see in the distance with pockets of snow on the mountains.

Valjavec seems very keen to get on with things and Rasmussen and Casar have to chase him on the descent, but the three are together by the bottom, Popovych leaves the chasers, but maybe wants some fresh air for the drop into the valley, he’s not going to achieve much on his own. Phonak regroup a bit as a few of his team-mates get back to the field and leader, Floyd Landis, he’ll have some company until the climb of the Croix de Fer then he’ll have to look after himself from there to the last push to La Toussuire, and a possible show down. Bad crash for Chavanel (Cofidis) on the descent, bike broken against a cement block, not looking so good, gets a new bike and he rides on. 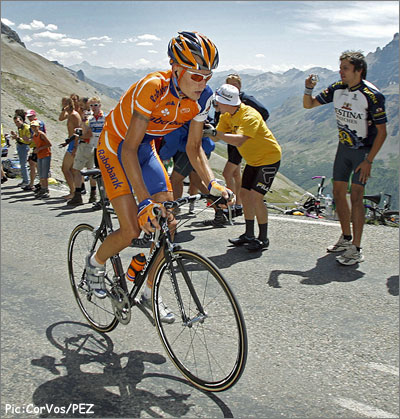 Michael Rasmussen did it the hard way today, going solo for most of the day – incredible ride.

Now Up La Col de la Croix de Fer
The three are still together as they start the climb, Casar is looking like he has had enough and is soon dropped, the chase group split with Popovych, Simoni, Commesso, Calzati, Sinkewitz and Arroyo on the attack. Rasmussen drops Valjavec and goes for it on his own, in the peloton CSC take over the leading work with Sastre in mind, Landis in fourth place and no team in sight, Leipheimer, Kloden and Evans are close to the front, while Landis drifts back in the group, nearly to last wheel. No worries right? The field was small, not much difference from front to back, right?

With 6 kilometers to the summit Leipheimer jumps away as more and more riders go out the back, Hincapie and Merckx being the more obvious losers. Rasmussen goes over the top of the mountain and takes full points and the jersey and has over 8 minutes on the yellow jersey group, Leipheimer catches Casar with a kilometer to the top, Valjavec was rumored to be between, but hasn’t been seen for a while, he is second over followed by Leipheimer and Casar and then Moncoutie (Cofidis) on his own.

The next climb is the Col du Mollard (1638m) and Rasmussen is looking good for the stage victory, he has over 7 minutes now as Leipheimer leaves Casar and catches Valjavec. The main peloton is being dragged up by Caisse d’Espagne and T-Mobile, Landis is cool and has one team member in the group, T-Mobile has five! Rasmussen takes the Mollard and more points, Leipheimer and Valjevec next at 4:40 then the very tired Casar at 7 minutes, bunch at 7:20, readying themselves for the nasty descent, Merckx has made it back to the side of Landis to pilot him down.

The Grandstand Finish: La Toussuire.
Eighteen kilometers from bottom to top, and over 1000 meters climbing, very hard at the end of a hard day, Rasmussen starts the climb with 4:31 in hand on Leipheimer and Valjavec and more than 6 minutes on the yellow jersey group.

Menchov attacks first taking Michael Rogers and Cadel Evans with him – this causes a stir in the T-Mobile ranks, as Kloden missed the move and they didn’t want to give time up to Menchov or Evans, so they had to chase down their own guy. Of note, Landis didn’t even blink when the attack went, he slotted in and cruised up to the little group right on the wheels of T-Mobile. 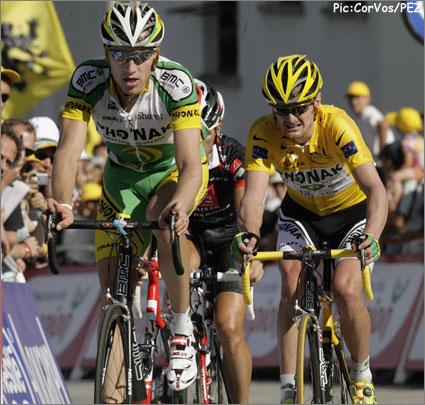 Floyd Landis endured a very, very long finishing climb after popping with 11k to go. He lost 8:19 to Carlos Sastre – nearly a minute per k.

Then it was Sastre’s (CSC) turn and he makes a big attack, and this time it’s game over for Floyd Landis. Landis nearly falls off his bike. To say Landis was in trouble is pretty close to saying that the universe is big. This was an eruption a la Krakatoa. He first has Azevedo (Discovery) for company, but within seconds Azevedo has what seems like a 10 mile lead on his – it’s looking really really bad for Floyd.

To pop an old cliche – the leaders smelled blood: Menchov and T-Mobile put the hammer down hardcore, while Landis, blank-faced with the look of death, rides a tourist pace, completely done. 15, 20 then 25 seconds down on the other favorites, he’s stuck to the road, sweat pouring off him, he’s hardly moving, the legs have gone. 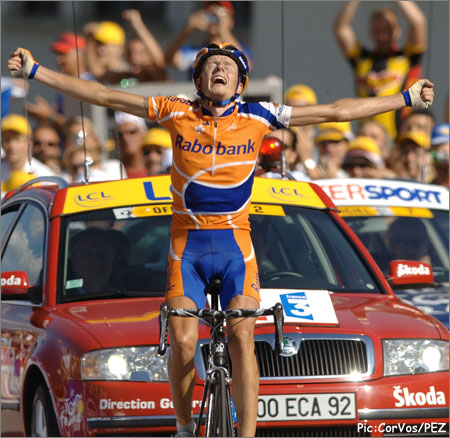 Completely oblivious to the chaos behind him, Michael Rasmussen celebrates his second career Tour de France win, a return to Polka Dots, and his team’s fourth stage win at the 2006 Tour.

Sastre has made the big move, he catches Leipheimer, who is doing his best Floyd Landis impression, as he appears to be stuck to the road without cranks. The T-Mobile lead group has new GC leader (on the road) Pereiro and Kloden, Menchov and Evans. Rasmussen is still on for the stage win, but all the action was happening behind, Kloden puts some pressure on the pedals and only has Evans and Pereiro for company. Menchov got his ticket punched and cracked spectacularly, and all along, there was Oscar Pereiro – effortless. 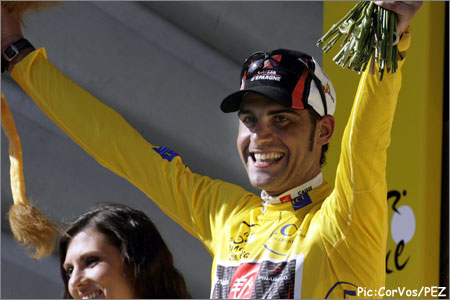 So What of It?
We’re still shaking our heads in disbelief, who isn’t? Considering the shaky ground on which this Tour started 19 days ago, the Alpine stages have shown us the most wide open, best racing in years. Le Tour is BACK, baby!

Oscar Pereiro went from 46th Place, nearly 30 minutes down, to Yellow, lost it yesterday, and then went and led home the leader’s group for THIRD place today. Pereiro can quite possibly make the combined teams of the Tour de France look like complete morons if he can do the same thing tomorrow and hold on tight in the TT. 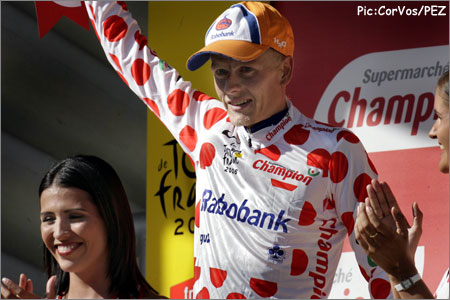 Rasmussen got what he wanted when he started the day: Dots, lots of em.

Oh, and then there’s Michael Rasmussen, who had arguably the best ride of anyone in the entire Tour de France so far – taking all the KOM points today and grabbing a huge lead in that competition.

The epic size of Floyd’s demise was second only to its surprise. Sastre is now within grasp of winning the whole shebang. Klodi’s close and has the strongest team. There’s even a Frenchman in 4th! Mon dieu! Cadel is close and looked good enough on the climb – but he’ll have to attack if he wants it. Levi – for all his work – just didn’t gain the time, in fact, he lost even more time when he went crrrrrrack. 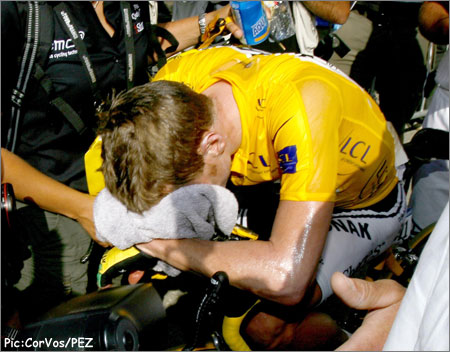 Landis was a shell of the rider he was but one day ago, where he looked completely in command and nearly effortless. Can he pull it together for tomorrow? What happened? Is he ok?

It all means that tomorrow’s stage 17 to Morzine will hold the key to set up the overall before the final chrono Saturday. Anyone who wants podium must get rid of their challengers – and that means all out war on the 4 big climbs awaiting. Pereiro is a sitting duck in the chrono (Sastre ain’t much better) – so they’ll want to consolidate their lead, maybe they work together tomorrow?

Expect T-Mobile to take charge and use their numbers to shut down any attacks. Levi has nothing to lose, so if he’s got legs, watch for him off the front again, and Cadel’s gotta light a fire. And don’t count Floyd out – he can still climb and TT – so if he just had a bad day – he’ll be back with a vengeance.

Looking closer at the TT results from Stage 7, we see that Sastre and Pereiro aren’t quite as piss poor as previously thought:

Pereiro (23rd) lost only 1:40 to Landis in the TT. Sastre? He rode a respectable time and finishing only 1:10 adrift of Landis. Menchov, Kloeden, and Evans were all within six seconds of each other, less than 50 seconds behind Floyd. None of the contenders managed to take more than 1 minute out of Pereiro. Intriguing.

Meaning? If someone wants Yellow from Pereiro, better do it tomorrow.

Just what will this Tour throw at us next…? Tune in tomorrow!

Rider Comments
• Team Phonak: “From the very beginning I didn’t feel as good as I usually do,” explained a disheartened Landis at the finish. “It was the worst time to have a bad day,” he complained. “To see Landis suffering like that was a bad surprise.” said Axel Merckx. “We’re going to offer Floyd Landis moral support. He’s an excellent captain. We’re not going to leave him alone,” said Merckx.